I always liked this character. She’s very similar to one I came up with for the MSH Classic RPG while Power Pack was being published. But as with all one-appearance characters, this profile involves speculation.

Powerpax appears to have all of the powers of the original Power Pack. This includes the ability :

Powerpax took part in a defensive attack by X-Force against intruders, on the grounds of what was once Charles Xavier’s mansion. She managed to blast through the giant vehicle utilized by Arize and his Spineless One companions, Milton and Shekky.

However, Arize revealed he was on a mission to ask X-Force’s help. Thus, the team took them in to recover. Arize revealed that former X-Force member Shatterstar had become a merciless dictator on Mojoworld. He requested the team’s help.

Powerpax and the rest of the team traveled to Mojoworld. They sneaked into the arena where the Spineless Ones were now put into combat for the sport of spectators. After a disguised Arize defeated some of Shatterstar’s forces in the arena, he revealed himself.

Shatterstar, realizing what he was doing was wrong, was attacked by The Scheduler, his second in command. He threw Shatterstar into the arena, and ordered his guards to attack all of them. Powerpax and X-Force, along with Arize, Shatterstar and a sudden arrival of Spineless One rebels, took out the guards. Soon after that, Shatterstar defeated the Scheduler.

It is assumed that Powerpax and the X-Force team returned to their own world and time shortly thereafter.

Given her name, it is obvious Powerpax is somehow related to the kids from Earth-616’s Power Pack. But just how has not been revealed. This particular alternate future takes place at least 10 years into the future, though there are several hints that it’s closer to 15 or 16.

Using the theory of how old the Power children are in Earth-616  time, that would probably make only Alex or maybe Julie old enough to have a child Francine’s age. Frankie appears to be just turning into a teenager, maybe 14 years old at most. Though she could be as young as ten given her height in comparison to the adult members of the team.

It is also not revealed if she inherited her powers via the Kymellian race, as did the original members of Power Pack. Perhaps she inherited them through birth, making her a mutant. All four of the Power children held all four various powers at one point or another, making any of them eligible to pass on the traits.

It is also theoretically possible that she is an *additional* Power sibling. Jim and Margaret were still young at the time Power Pack was operating. Thus, it is not inconceivable that they might have another child.

A child born to Jim and Margaret Power at the time the story was published would have been in the correct age range if the story took place “Ten Years Later”, as described in the story.

It’s also noteworthy that it is not clear whether Earth-Shattershot would be an alternate or divergent reality. If the latter, than it can be safely assumed that all people and relations were identical to that of Earth-616 up to a particular point of divergence. Which presumably was after the modern era.

However, if it is an alternate reality, all bets are off. Relations could be identical, or they could be markedly different. Jonah Jameson could be Peter Parker’s real dad in an alternate reality. So the relations listed with the Power Pack family of Earth-616, are not necessarily true in Earth-Shattershot.

Powerpax is a small girl, slightly built with stawberry blonde hair, freckles, and a serious disposition.

Aside from said serious disposition, Powerpax is quick and bright. She quickly understands what her elders need from her and doing her best with everything she has.

Judging from the way she has been seen used in combat under Sam Guthrie, Powerpax specializes in fast-attack combat and point recon. It’s a strange position for a child her age.

Cannonball (over the comlink): “Frankie… Target’s a Spineless One… From Mojoworld, copy ?”
Powerpax: “Scoped, Mr Guthrie.”
Cannonball: “… You can call me *Sam*.”
Powerpax: “An’ when we blaze out, you call me *Powerpax*, cool ?”
Cannonball: “Cool. Now take ‘em DOWN”

“Mass down… Strength up… Powerpax bullet, rippin’ through !” (*CRASH*) “Fatboy’s spinnin’ gears. All yours, Illyana !”

Without using Power Pack in the DCU, Powerpax herself loses some impact. However, having her as part of a future Teen Titans team, and being related to one of the PC’s would make for an interesting situation.

Powerpax makes some fairly inventive use of her various powers to get the maximum effect from her attacks. Using her Flight as EV for a Charging attack and Superspeed for AV, she Shrinks to minimum size, which gives her maximum protection from her Density Increase. She may even have Pushed her Flight to attain maximum damage.

The result is a punishing Physical attack that can destroy an automobile-sized vehicle (possibly even an armored one). It would probably render a normal person into splatter-patterns on the landscape. 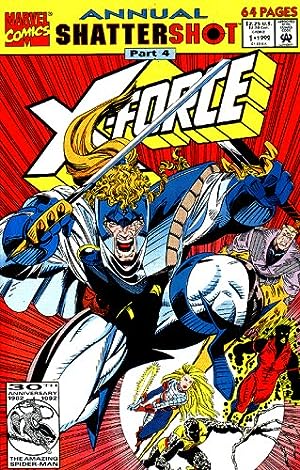