Through unrevealed means, Scott possesses the unusual ability to absorb any and all forms of energy (electrical, solar, kinetic, etc). He then converts it into an electric charge which he can employ for a variety of purposes. This unique ability renders Scott nigh-invulnerable to physical harm.

He can emit lightning like electrical arcs from his body, usually guided by his hands. These can travel through the air to his target or via other conductive mediums. He can also cover his body in a sheet of electricity, causing damage to anyone who dares to touch him. By projecting his electricity in a sustained burst behind him, Scott can fly at unrevealed speeds.

It is unknown exactly how much electricity Scott can produce when he is carrying a “full charge,”. But in the past he has produced a bolt of energy strong enough to stun Invincible. From this, it can be surmised that when fully charged he can generate more power than the villain Kursk, who is capable of unleashing a single blast of 200,000 volts.

PowerPlex is unable to store his absorbed kinetics indefinitely. His energy reserves will quickly become depleted with any form of exertion.

However, he stole experimental disks designed to reabsorb the heat lost from the human body from the government lab he worked at. He eventually converted them into a means of extending his ability to absorb energy. The discs, now mounted on his Power Suit, allow him greater control and regulation of his power output and extend his charge.

Scott Duvall had a beautiful wife named Becky, a healthy son named Jack and a loving sister named Jessica. He had a good job, superhuman powers, and a great family. His life was just about perfect, until the day that Omni-man and Invincible tore through the office building that Jessica worked at.

Jessica was an office assistant at an advertising agency. She worked there to pay her way through college. She arrived at to the office that morning, but never made it home due to the collateral damage that the Grayson’s fight caused to the building. Her body was never recovered from the rubble of the downed building.

Grief stricken, Scott blamed not only the villainous Omni-man but his son as well. In his mind, he knew that it was all truly an act. He thought that Invincible was truly in cahoots with his father. Scott became obsessed with extracting vengeance on the young hero, and to his surprise his wife supported this.

As he plotted his nemesis’s demise, Scott sought ways to refine his powers. He hoped to transform them into a weapon deadly enough to kill his sister’s murderer. To facilitate this, Scott stole experimental discs from the Pentagon science lab that he worked at.

The discs were originally mean to store body heat for reuse at a later time. But he altered the discs to give him greater control and endurance with his powers, fashioned them into a costume and adopted the alias of PowerPlex.

Together with his wife Becky, Scott practiced using his powers. He also rehearsed his speech he would give to Invincible before he killed him. When he felt ready, the newly christened PowerPlex emerged into the public eye and started causing mayhem.

He reasoned that Invincible would be drawn to him if he incited enough panic with the general populace. Though he never injured any civilian, he caused vast amounts of property damage.

But despite his antics, he couldn’t draw out the young hero. Instead, he found himself battling heroes like the ShapeSmith and the Teen Team.

It wasn’t long thereafter that he had to quit his job. The people he worked with had started to link him to the thefts at work. As his frustration grew, he and Becky hatched a risky plan to finally bait Invincible out into the open.

Scott took Becky and his son Jack as hostages. He publicly told the authorities that if Invincible himself didn’t show up to save them, that they would die. To his relief, the young Viltrumite arrived in a blur of motion to save the faux hostages.

Enraged, PowerPlex hurled his considerable power at Invincible. He also hurled his accusations and battered Invincible with the story of how they came to that very moment in time. The young hero was immediately regretful and apologized for his part in Scott’s sister death.

Despite that, Scott unleashed his full power against his hated foe. As he gained a slight upper hand during the battle, the final tragedy in his life played out. The current from one of his blasts travelled across the metal floor he was standing on and eventually reached Becky and Jack. They were instantly killed.

Invincible then grabbed Scott and held him immobile, and unable to absorb any more energy. Cut off from the source of his powers and overwhelmed with grief, Scott broke down and cried. He was eventually sent to prison. After some time there, he requested a meeting with Invincible to which Invincible agreed, hoping to make peace with the man who had so much taken from him.

Instead, what he received was a cold message from Scott. He had reaffirmed his desire to kill Invincible and thought it was only fair to let him know.

Less than a month passed after the events that led to his wife’s death, when PowerPlex escaped from prison. He was freed by an evil doppelgänger of Invincible (of all people) who was loosed upon the earth by Angstrom Levy during the Invincible war. PowerPlex laid low during the war, but was found helping clean up the aftermath when the fighting was over.

When the true Invincible arrived to help with the clean up, Scott attacked him full force once again in a desperate attempt to kill him. Unfortunately for him, Invincible once again proved to be too resilient to his power. Scott ended up back in prison. He waits there once more, awaiting his next chance at vengeance.

PowerPlex is a good looking, muscular, all American type. He could easily have been the guy living next door to you.

His costume is made up of a black body suit. It has red squares running down the outside of his thighs and a solid red circular pattern that runs from his shoulders to his pectoral muscles down the front of his suit. The pattern holds true in the back as well.

He doesn’t wear a mask or gloves, even though the body suit covers his neck and his ears as well. It is clear that he is unconcerned about his identity being discovered. His blond hair sticks out of the top of the suit in an unkempt pile.

The suit is completed by a pair of sturdy metallic grey boots.

Scott’s emotional turmoil has driven him insane. As a result, he has become obsessed with killing Invincible. No attempt to reason with him, or to explain away his delusions will work.

If he sees and comes across Invincible (or his father Omni-man), there is no doubt that immediate and bloody violence will ensue. 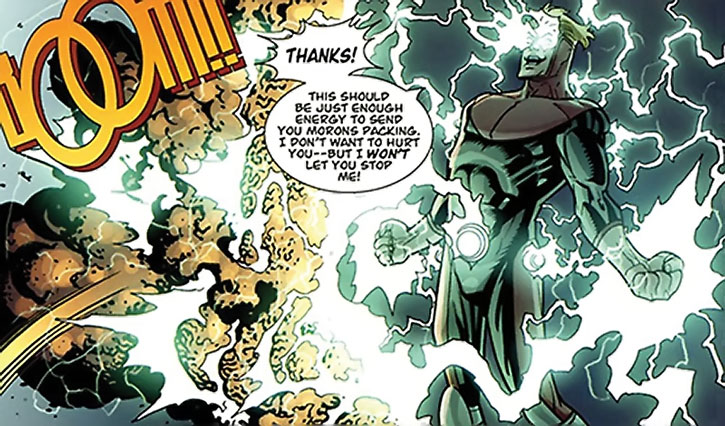 On the flip side, Scott is a caring and passionate family man. He obviously wants to help any victims of any perceived crimes. Despite his chance at freedom and escape, Scott actually stuck around to help with the rescue effort after the Invincible war. The truth is, Scott is really a decent guy who has lost his way due to his inconsolable grief.

“INVINCIBLE !! You think you are above the law — you think your actions hold no consequence ! You are WRONG ! You will PAY for your crimes against humanity ! POWERPLEX WILL MAKE YOU PAY !!”

“It’s not working ! I can’t get him to come to me ! I can’t find him ! There are too damn many superheroes ! How do I get Invincible to come after me ?! AARRRGH !”

“You think this is it for me… you think I’m no longer a threat to you. I’m here to say that you’re wrong. I will avenge all the deaths you’ve caused — each and every one of them. I’ve got time in here — I’m researching, finding every single person who lost their life because of something you did. I’m going to make you pay for it all. I won’t be in here forever. They’re keeping me contained — no solar energy, no electricity … they’ve cut me off … but sooner or later, someone will mess up. A guard will get careless, hit me — give me the energy I need to escape. When that happens, I’ll find you … and I’ll find a way to kill you.”

PowerPlex could make a fascinating foe for Hal Jordan, as in the DCU Jessica could have lived in Coast City and he failed to save her. He could also make a cool addition to Superman’s rogue gallery if his sister was killed during Superman’s fateful battle with Doomsday. 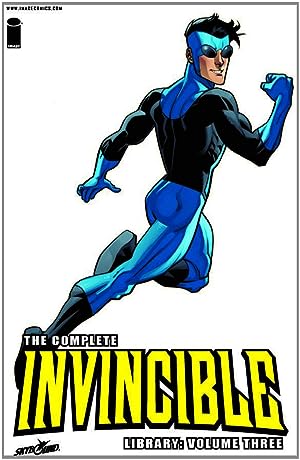 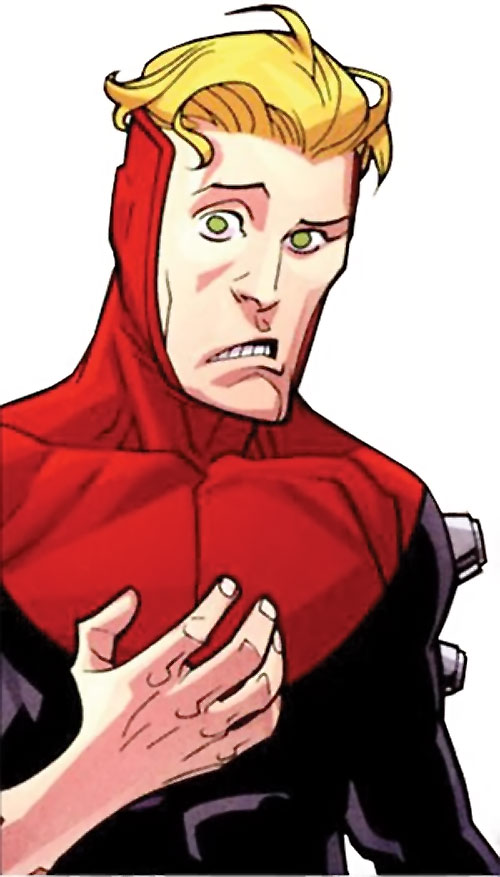 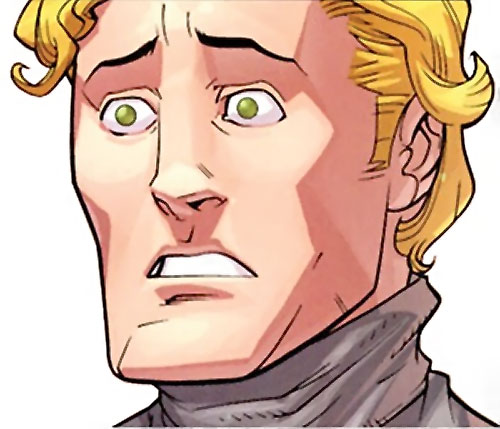 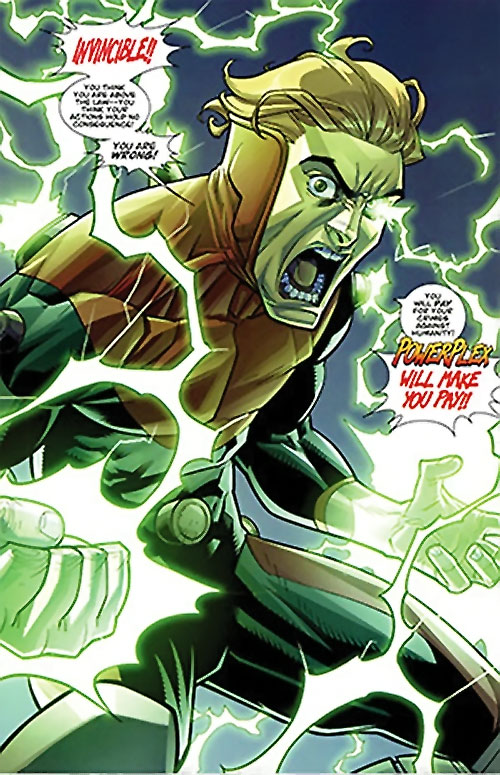 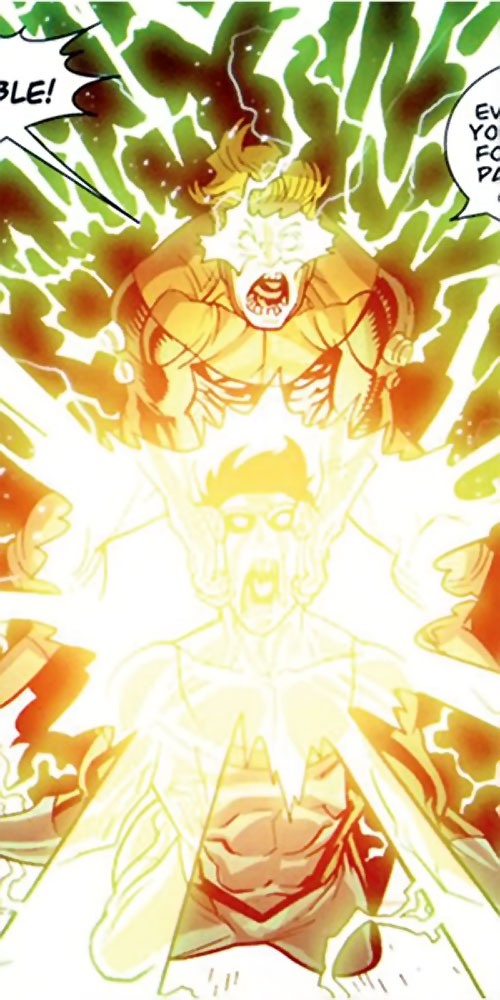 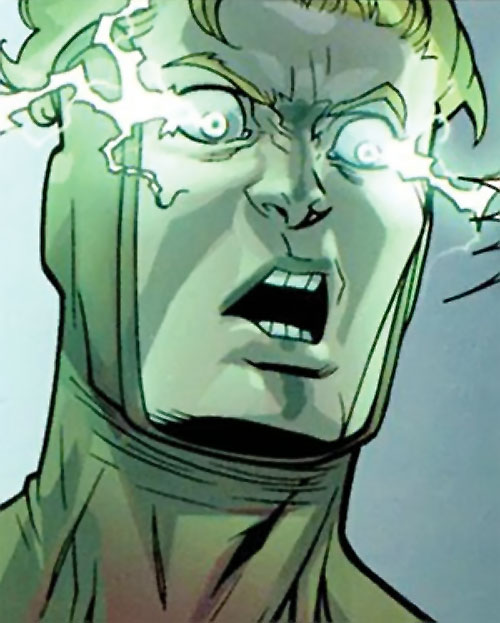 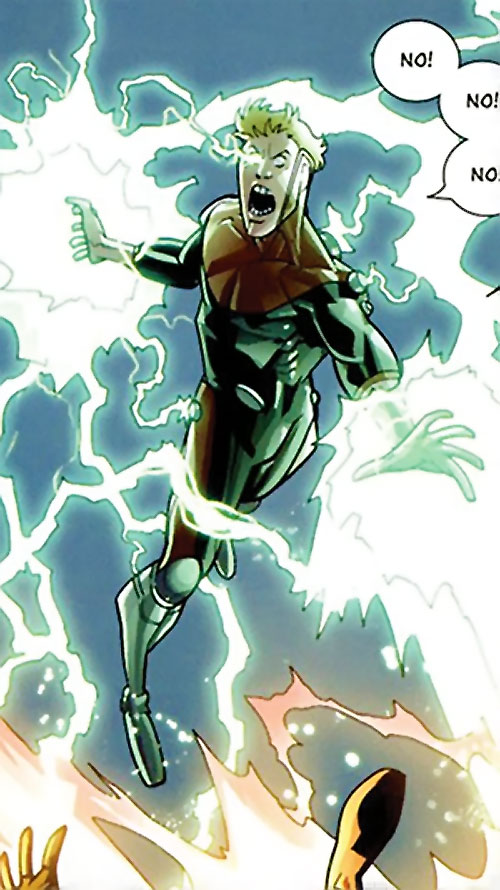