The Prairie Ghost is a living poltergeist. While his powers have not been fully revealed, it is known that he possesses a strong, ghostly steed. In ruthless vigilante fashion, he also wields mystical chains as weaponry.

As something similar to a ghost he is intangible most of the time, as is his steed. But by concentrating he can make certain parts of himself temporarily tangible enough to attack (or be attacked). It is known that it becomes harder and harder for him over time to become tangible.

The constant intangibility makes him immune to most types of attacks, and a very dangerous opponent. For he can, for example, will his hands and weapon only to become tangible.

He looks like a dead cowboy, and indeed possesses most of the typical cowboy skills.

As a near-ghost he has no life energy, and as such, he is something of an anti-being. When dispersed he cannot really feel any sensations at all. It is known that he is somewhat susceptible towards mental attacks and energy attacks.

The Prairie Ghost appears to be magical in origin. It is known that he has been a hero and an active vigilante for long.

Prior to 1970s he had the gift to become intangible at will, and could lead a more normal life. But then he became more or less constantly intangible like a curse.

The Prairie Ghost is a well-known scourge of villains around the world. He spends all his time fighting the good fight with the End League in their struggle to save the world.

When last he was seen, Dead Lexington was draining the little life energy that he possesses. It’s unclear if he survived the experience, but given his nature and powers it seems quite likely.

The Prairie Ghost is a ghost wearing some common loose-fitting cowboy paraphernalia. He wears a brown duster coat, a pair of trousers (maybe of the shotgun model), a very large, wide-brim, flat-top top sombrero hat, a leather belt with a metal belt buckle with a skull motif and modern boots (but with no cutter spurs).

Adding to his supernatural origin are chains wrapped around his arms, and, instead of a lasso, the sickle chain weapon, which is wrapped up around his chest, which is covered by a tight-fitting, grey T-shirt, when not used. His skin color is an actual, unhealthy-looking grey shade.

The Prairie Ghost is most often seen roughly riding his ghost steed, and wielding his scythe weapon. The ghost steed itself is a full-black steed in excellent health, and with glowing energy eyes. Together the pair makes for quite an impression.

The Prairie Ghost has a genuine purpose to fight evil, which he is certain exists in pure forms in the world. However, he takes every failure very much to heart, and is prone to depression. In particular, he appears to develop a depression when he doesn’t have enough to do, no goal or challenge to complete.

Part of his depression may originate from a sense of being crippled since he is devoid of any physical sensations almost all the time, probably is feeling constantly hungry and even has difficulty feeling truly alive. As such, he often has difficulty motivating himself to defend himself even if he likes a good scrap. All in all, he seems to be of a rather bellicose mentality. 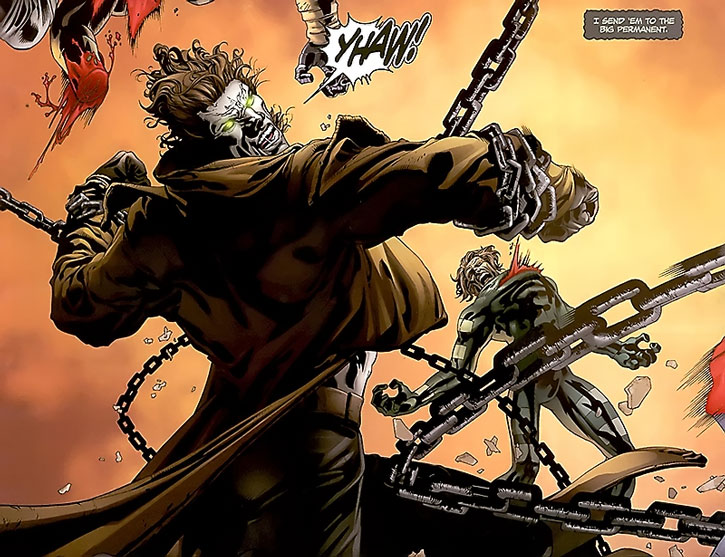 He has an honorable movie cowboy mentality in his intentions and demeanor, and speaks with a Southern accent where he uses a lot of classic Wild West lingo in his everyday speech, much as if it were his native mode of expression, which it may well be. He, like fellow vigilante Zane, aka Codename Black, does not seem to have any compunctions regarding using lethal force when necessary.

He seems to consider his steed Crowbait a good and loyal long-time friend. As to the End League, he is an excellent team player even if he nags a bit too much.

“Kill one o’them lousy curs an’ the rest retreat. Ain’t no fun in that.”

“Ya see that, ol‘ girl ? Explosions, smoke, an’ a compadre fallin’ from the sky… signs that this here grocery run’s ’bout ta get innarestin’. Yhaw !” 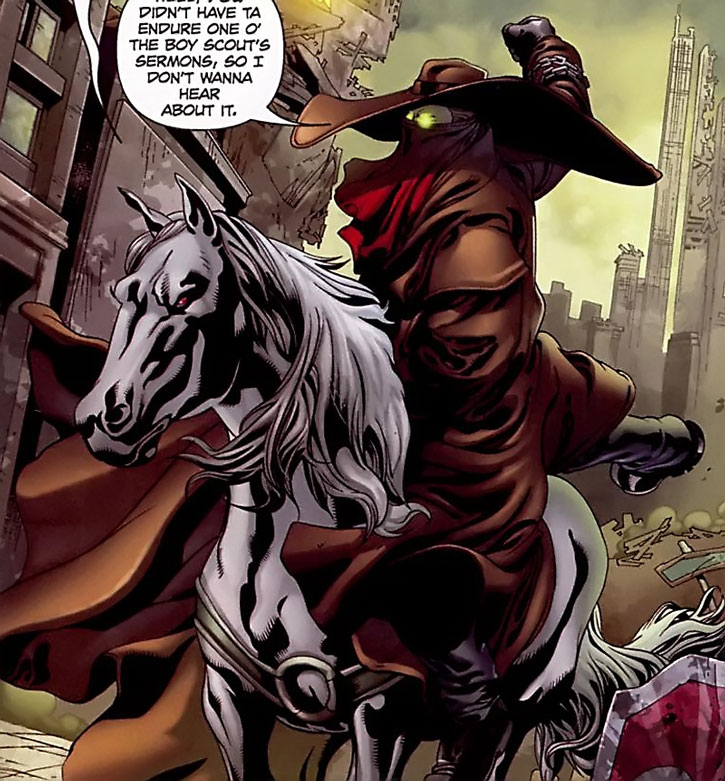 “Empty handed, yet again. Might as well be out lookin’ fer the goddamned Excalibur fer all the luck we’re havin’ findin’ that hammer.”

“Y’all ever seen a two-ton sickle ? Allow me ta make the introduction !” [slash !]

“Look at me – I’m a goddamned walking ghost. Takes every bit o’ strength I got ta stay solid fer more than a couple o’ seconds a shot. I can’t eat nothin’ nor feel a woman’s touch – Ha, not a decent bit o’ food around or any chance of meetin’ a lady if I could ! Entire world’s a polluted nightmare, run by the lowest yellow scum suckers… I’m tellin’ ya the truth – I’m done, I ain’t got any fight left.”

“C’mon, ol’ boy… you’ve got strength enough left… fight… knock the idol out of his hands… but fer the life of me… can’t see one reason to.”

While the Prairie Ghost is an analog of Marvel’s Ghost Rider character, he has no clear analog in the DC Universe.

Connections:
The Squadron of Righteousness aka the End League (High).

Drawbacks:
Attack Vulnerability (-4 CS OV/RV vs energy attacks when in Dispersal form), Creepy Appearance (Burning green eyes and hair and half-zombish looks), Misc. Drawback (Prairie Ghost is slowly starving to death over the years; he spends energy only during the time he has taken on a tangible form, but is incapable of eating and digesting anything during these rather short times).

Equipment:
Chained sickle Weapon [BODY 13, EV 07, 11 w/STR, STR 06, Density Increase (sickle only): 05, Stretching 01, Notes: The weapon is supposed to weigh two tons when the Prairie Ghost has willed its mass to multiply. In this case a STR of at least 6 APs would be required to use it effectively, and in this state it is a most devasting weapon in his superhuman hands.]

Additionally, being very, very fast, it has Running of 07 APs, and being a ghost stallion, it has Dispersal of 18 APs always activated, allowing only the Prairie Ghost to ride it and interact with it. It is unknown if it can become tangible like its owner by concentrating.

It completely obeys the Prairie Ghost’s every order, and will stand ready to travel fast and furious as need be. 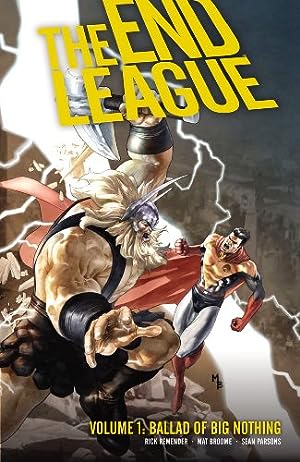 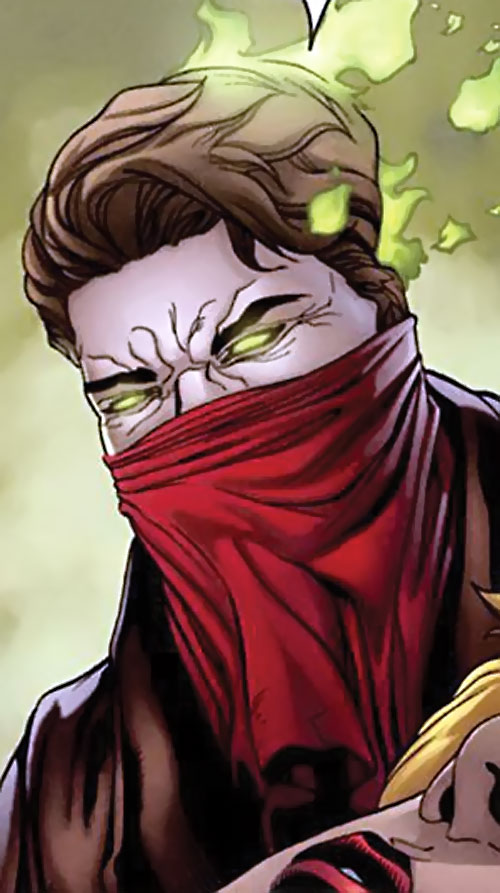 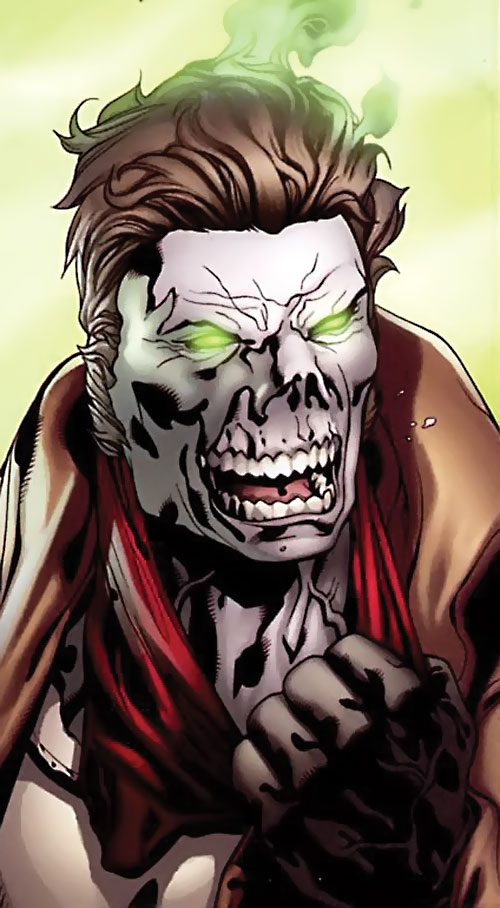