Pravda is an obscure DC Comics character, first seen in 1986 as an Outsiders opponent.

However, this entry is a NON-CONTINUITY one about an ORIGINAL VERSION. I’m using caps because that’s not normally how we work. But is used a variant of Pravda in a campaign of mine (with inspiration from a Shawn Havranek article in GURPS Villains), and thought that putting these notes here would be more helpful than confusing.

A writeup for the actual published Pravda can’t be done right away, since we need a full Looker character profile first. She’s the only benchmark for Pravda’s powers.

Pravda is a telepath. Although her raw mental power is not tremendous compared to some, she’s quite adept in using it.

She’s particularly efficient at implanting images evoking a victim’s worst fears, and at melting in the local mindscape like some mental ninja.

The People’s Heroes abilities are said to derive from careful analysis of the captured agents of the American Force of July. But it is unclear whether Pravda’s powers are derived from an American. They may have been derived from Silent Majority’s ability to communicate with his doubles.

The People’s Heroes were a covert force under the direct command of the Soviet Premier. Their first known mission was to capture Batman and the Outsiders in Mozambia. They managed to defeat the Outsiders, but the heroes escaped and won a rematch.

When they managed to go back home, the People’s Heroes found their aura had tarnished and they were eclipsed by the all new Rocket Red brigade.

They later were seen intercepting elements of the Suicide Squad, which had infiltrate the Soviet Union. But their successful trap was broken at the last minute by an armored gunship assault and Suicide Squad reinforcements.

They later attempted to capture Red Star in the United States, but where opposed by the New Titans. Most of their missions — domestic security details and black ops — are undocumented.

During Mikhail Gorbachev ’s mandate, the People’s Heroes became strongly tied to him. They thus faded into obscurity when he left. They unofficially disbanded during the late 1990s, although they often have drinks together when they can fit a rendezvous in Moscow in their schedules.

Pravda is by far the member of the People’s Heroes that has drifted the furthest from her old job, having become a vicious crimelord.

Now insane, Pravda is dressed like a Russian street person, with many layers of ragged clothes for insulation.

Pravda was a vicious control freak, mind rapist and manipulator even in her heydays. But a psychiatric team was responsible for her and managed to keep her stable through therapy and drugs.

Besides, cutting loose would have implied answering to Hammer – or, far worse, Sickle.

Now on her own, Pravda is thoroughly insane. She lives on the street, ranting incoherently and walking to keep herself warm. She is always talking about the “Great Russian Crime Empire” of which she is supposedly the mastermind. Although nobody takes her rambles about it seriously, they are almost true.

Pravda has brutally intimidated numerous mobsters in her service. She keeps in constant telepathic communication with many of her men – who have never seen her. She will use Hypnotism on random passerbies to turn them into pawns and messengers, making the criminal empire in her head a reality.

Her power fantasies and manic desire for control make her a ruthless, efficient crimelord in her head. And with her powers, that is sufficient.

Pravda will go to great efforts to present a much more amiable side to the People’s Heroes when there is a team reunion. She will take great pains to clean herself, wear normal clothes and appear much saner than she actually is, although still somewhat sick and sinister. It is unclear why this ritual is so important to her.

By Sébastien Andrivet (v1 by Steve Crow and Doug Franks for Mayfair).

Batman and the Outsiders by M. Barr 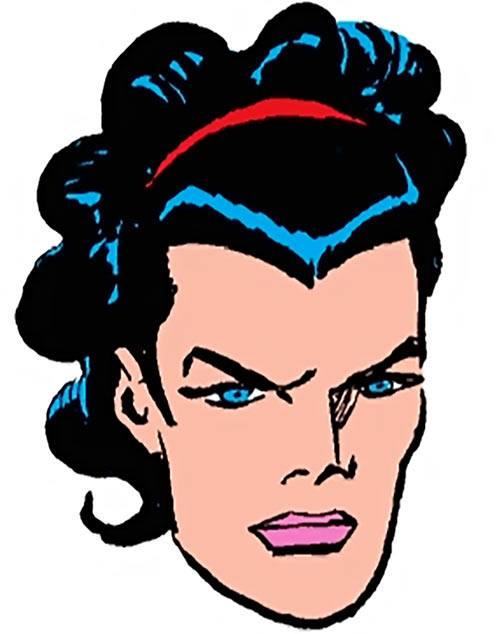