These are the prawn-like aliens from Peter Jackson’s 2009 mockumentaryA video depicting fiction but presented as a documentary District 9.

The film serves as a parable about refugees. It also draws from director Neill Blomkamp’s childhood in South Africa during apartheid, and his previous short Alive in Joburg, which was about segregation.

This entry has S P O I L E R S throughout.

District 9 aliens are crustacean-like humanoids. They have two arms and two legs. With two tiny arms folded under their ribcage. A chitinous insect shell covers their entire body.

Their hands have hard natural claws, good for chopping. Claws on their feet are for fighting – they can kick a full-grown man about 20 feet. They are strong jumpers too.

Their physical strength is greater than a man’s, though their own frame is thinner and lighter. 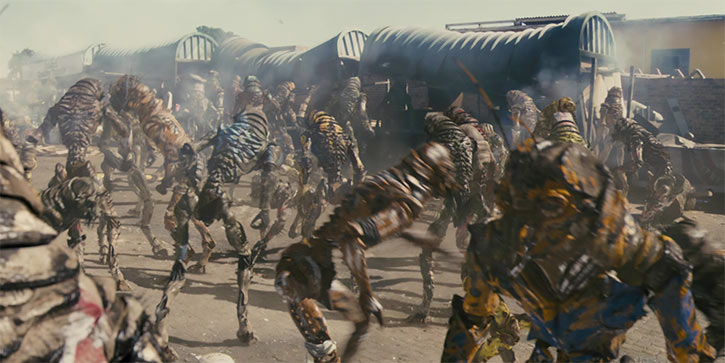 Beyond their natural abilities, they have an intelligence level on par with humans. They have many high-tech items with them, though those aliens we see didn’t create these.

The following is seen during the movie:

Non-Prawns can’t use these devices.

July 5th, 1982. Three months after the massive alien spaceship came to a halt over Johannesburg, South Africa. People decided, after much deliberation, to cut their way inside.

They found malnourished, unhealthy, and aimless aliens. The ship’s command module had been jettisoned and was nowhere to be found.

What do we do with them?

An aid camp was set up just beneath the ship. Initially, there was no plan and markedly insufficient supplies. Johannesburg couldn’t handle the one million refugees literally dropped on their city.

The aliens were given proper status and protection but the momentum stopped there. The refugees couldn’t live outside of their designated area, but they weren’t prisoners.

They could move around the city like anyone else… but some areas were designated as humans-only.

The aid camp became District 9, a fenced and militarized zone. Soon, it predictably became a slum. Criminal activity inside District 9 was rampant.

The Nigerians inside District 9 were ran by a man called Obesandjo. They preyed on the Prawns and ran illegal activities from there. Such as:

The alien population grew to 1.8 million. It was now clear to all that the aliens could not leave – their ship was inoperable.

Tensions rose, leading to xenophobic protests and riots. The people of Johannesburg had enough. The aliens had to go!

Enter the Multinational United (MNU) Alien Affairs. This multi-national group was created to engage Prawns on behalf of humans. It was entrusted with the monumental task of moving every Prawn in District 9 to a “safe place” – 200 kilometers outside the city.

To facilitate this action, mercenary groups were hired to protect the MNU workers, led by Wikus van de Merwe. Their task was to get signatures from every Prawn at least 24 hours before the move began. A signature meant the individual Prawn agreed to and understood the MNU’s right to evict. 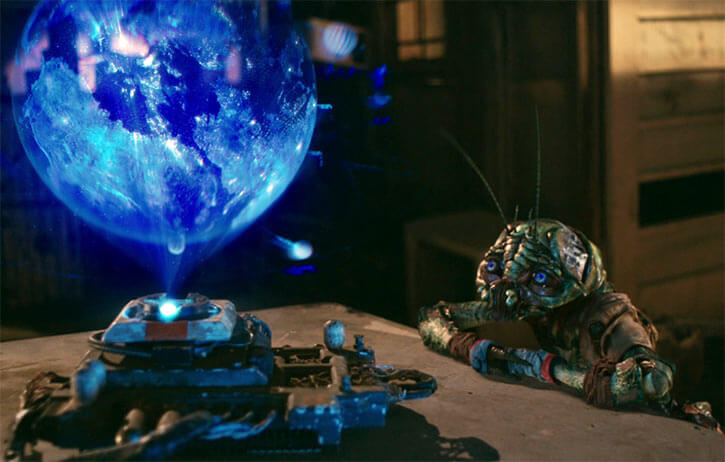 So, what could go wrong?

The Prawns did not understand what was happening. Some took up weapons and fought what they saw as an invading military force. Surprised at knocks on their doors, others refused to sign.

The mercenaries caused situations to escalate. Some were quick to the trigger. They killed uncooperative Prawns.

Prawn homes were ransacked or burned when troopers discovered illegal activities. The Prawns themselves were removed, arrested, or killed.

A couple of Prawns had searched for years for alien salvage. Some pieces held a small quantity of fluid, which was spaceship fuel.

They also found the lost command module – and hid it by positioning their shack over it.

Their plan was to fly the command module to the mother ship when they had enough fuel. Then to their homeworld.

Wikus confiscated the fuel, not knowing what it was. But a bit of it sprayed his face.

Old man look at my life. I’m a lot like you were.

Ironically, Wikus, who had mistreated the Prawns, started transforming into one of them. His left arm changed first. But further changes came rapidly.

Wikus learned first-hand how cruel humans can be to Prawns.

Soon, he was utterly cast out from human society.

Wikus hid inside District 9. He took alien weapons from the Nigerians, since he could now use them.

He then allied with the Prawn who was gathering the liquid. They broke into the MNU facility and reclaimed the fuel, surprising everyone.

The Prawn and his child escaped to the mother ship in the hidden command module. They promised to return in three years and fix Wikus’ body. The people of Earth cheered as the ship left, glad to be rid of them.

The MNU’s illegal genetic testing was exposed and condemned by the world.

District 9 was demolished. The Prawns were moved to District 10 where they are now 2.5 million and rising.

Wikus’ transformation to full Prawn completed. He twisted metal into flowers and left them at his wife’s front door. 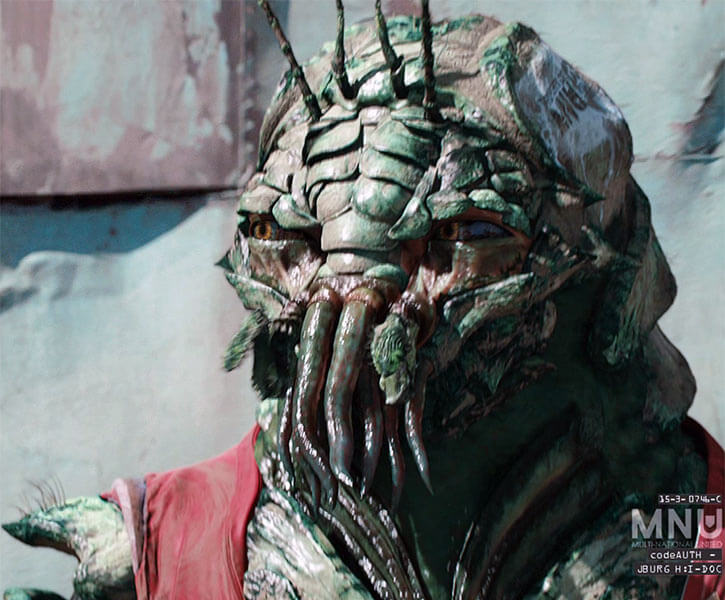 Their eyes are human looking. They can be various colors, but usually, yellow or green.

A few wore pieces of clothing. Such as a vest, a hat, or cloth wrappings. Most wore nothing.

All Prawns are stamped on the left side of their head with an identification MNU number.

The Prawns were lucky – they were able to breathe the Earth’s atmosphere.

Eggs are laid in a cluster with a large animal, like a cow, hung over them for nourishment. 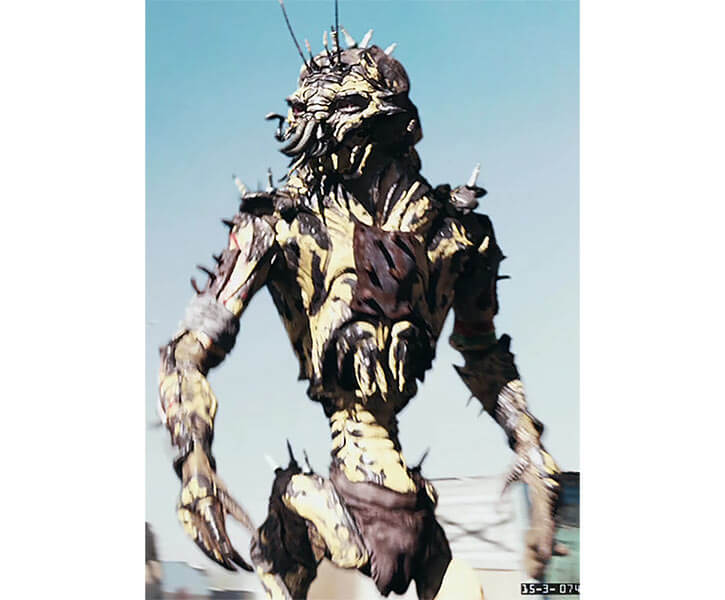 They can subsist on almost anything but enjoy eating cat food and chewing on rubber. What humans may find disgusting, doesn’t bother a Prawn.

The Prawns make quick, sudden movements, or run on all-fours then stand again. This can be interpreted as aggression.

They are complete carnivores. They attacked the colonel and ripped him apart eating him in a frenzy!

What humans say of them

Some people believe eating the body parts of the aliens let them ingest their power. Others see it is a miracle cure. Curing diabetes… all diseases. 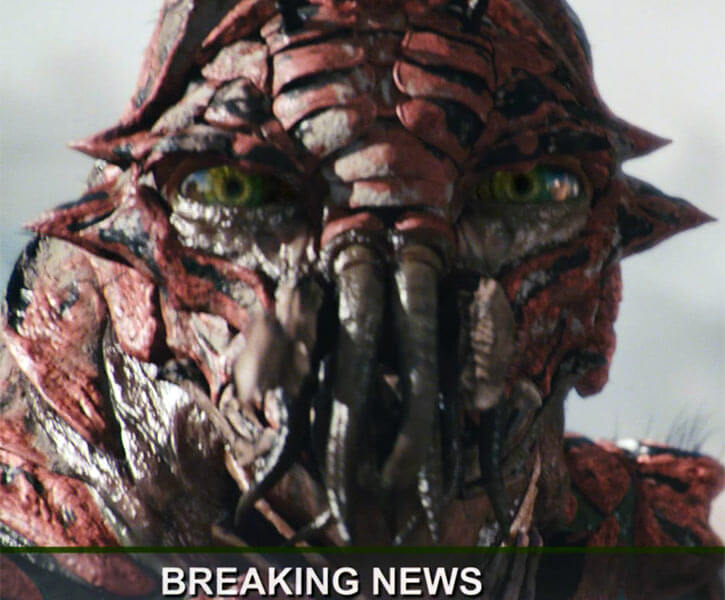 Wikus: “Hello ? MNU. We are here to serve eviction notices.””
Prawn: “What is eviction ?”

Christopher: “I thought you said not to kill them.”
Wikus: “He shot at me.”

(Low growl with quick exhale in a huff). 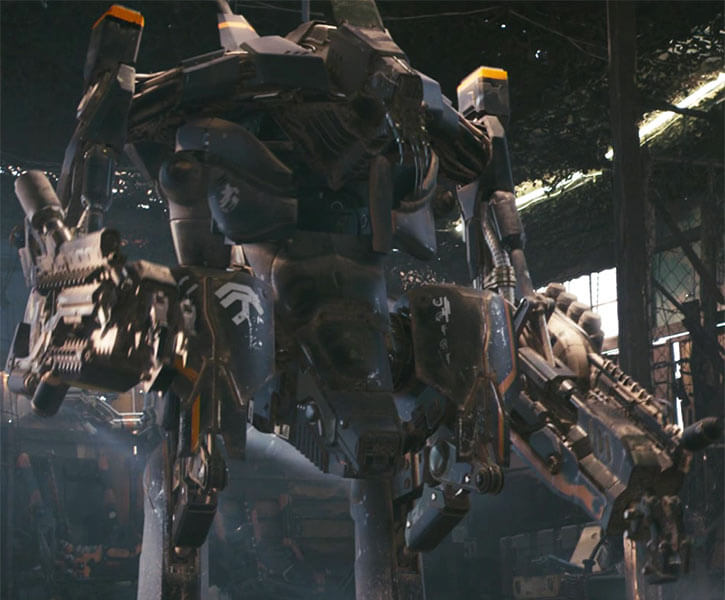 If the aliens had come to the DCU, the hero community could easily fix their ship and get them on their way.

But that would be too easy. The alien’s first contact with humans would be a villain or villain group. Perhaps the H.I.V.E.

Hellgrammite may find a kinship with them.

This way, they are used against the heroes. Before realizing who is on their side, getting help, and heading for home. 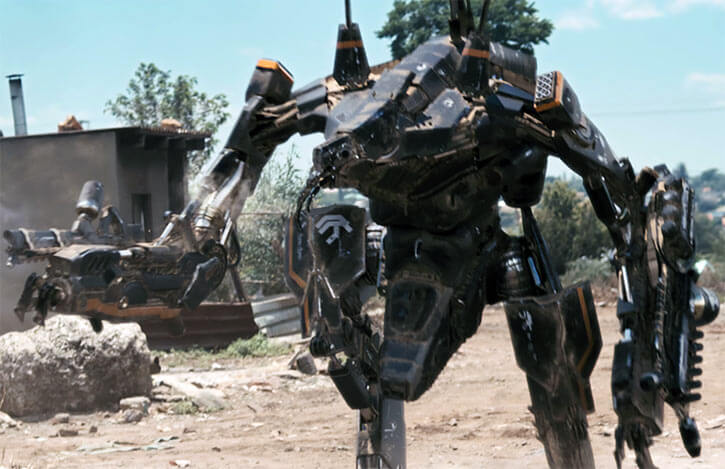 Language (Their own alien language) They understand English but only speak their own language.

An individual Prawn might have one energy weapon on hand. It’s illegal to have any. A large amount of their weapons has been traded to the Nigerians. All are keyed to interact exclusively with Prawn DNA. 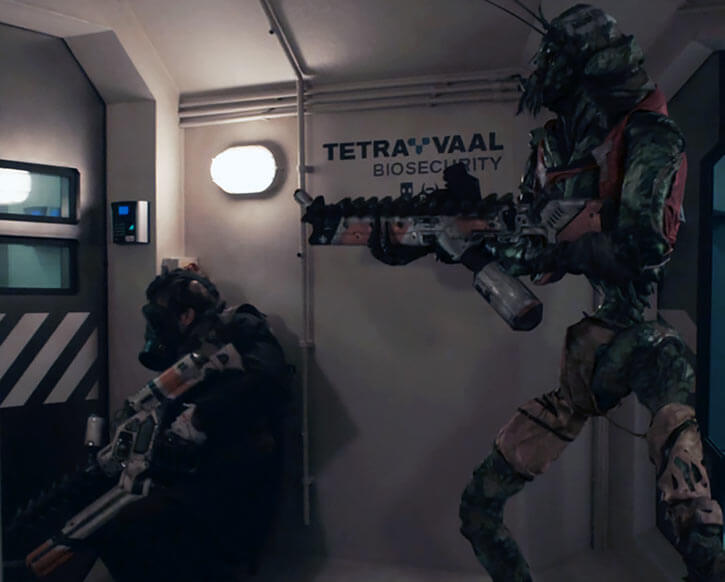 Their ship acts as a floating city. By the time the humans cut their way inside, the Prawns had nearly depleted all supplies.

When the ship was re-activated it let out a warning horn blast (Sonic Beam) that shattered windows throughout Johannesburg. 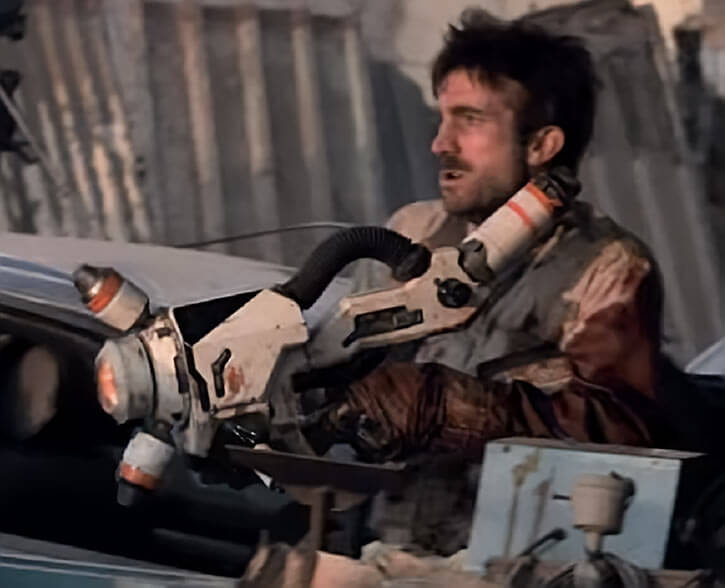 Wikus with an alien energy gun.

Like dogfighting or cockfighting, these creatures are used in fights for sport.

Shrinking is always on. 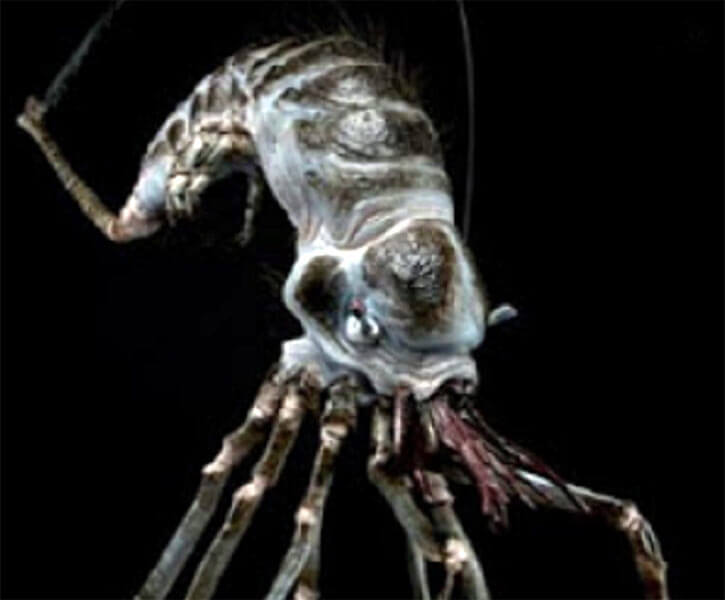 District 9 is similar to the 1989-1990 Alien NationTV series where aliens crash-landed on Earth. Both films deal with issues such as xenophobia, prejudice, and racism.

Some Prawns took human names (like “Christopher”), but humans almost exclusively referred to them all as “Prawns”.

We see a Prawn toss a large man in full gear about 20 feet using only one hand. Looking at the charts, 20 feet is only 01 AP. So, a throw like this on a normal-sized guy could be done with a STR 03. The problem comes when the guy being thrown is over 200 lbs (03 APs). (I’m looking at you Thomas).

The answer is, individual Prawns have higher strengths. Prawns, like humans, vary in strength and a STR 04 isn’t out of the question. STR 03 being the generic Prawn.

Attraction/Repulsion at 12 APs was selected so it could catch all the bullets. Bullets travel at twice the speed of sound – 12 APs. It worked to keep it the same for the Tractor beam that lifted the command module weighing 09 APs.

Source of Character: The 2009 movie District 9.