After being merged with Genesis, Jesse gained the power of the “Word of God”, allowing him to give orders in a voice which can not be disobeyed by anyone who hears and understands it. After he left his family, he became a proficient car thief and picked up a little of this and a little of that.

From his younger years, having been raised on a farm, Jesse really knows how to hunt, shoot and is proficient in maintaining and fixing machinery. He is, of course, an accomplished fist-fighter, and a cunning strategist.

As to his education, Jesse has received extensive Bible lessons and has further studied the subject on his own, to become a reverend. His mother also gave him a relatively wide scholarly education.

The Word of God

When his soul merged with the angel-demon entity Genesis, its powers, which are greater than God’s, would be focused into what Jesse Custer would refer to as “The Word of God.” When he uses the Word, his eyes turn red and his voice changes into what sounds like “nails scraping against your soul.”

Although, no one in creation can resist his commands, his victims must be able to understand his words. For example, animals would ignore his commands, and a group of attacking, monolingual French-speaking soldiers were able to resist him.

Furthermore, his control partly extends to metaphysical levels as well. He has set people aflame by ordering them to “Burn!” and killed others by telling them to “Die!” and they have actually done just that. This is represented by his Control-contingent Magic Blast and Pyrotechnics powers, respectively.

The Genesis entity, as well as the Spirit of John Wayne (see below), sometimes informs him of greater events taking place, which is simulated by his low-level Awareness power.

The story, completely available in TPBs, is a terrific read and is recommended to anyone that likes black humor, philosophy, societal commentary, the Texan way and gore. A biography of the Preacher can be found on comicvine.com .

Jesse Custer is an attractive male usually wearing a pair of jeans, a leather belt, a black shirt, a black jacket, and, of course, a clerical collar in black and white. He has black hair and blue eyes, which turn red when he uses the voice. He is often seen with a cigarette in his mouth. Later on, after having lost his left eye, he also wore a black eye patch.

Jesse, in his mentality, is a modern cowboy as told in the old legends of the Wild West. His tragic flaw perhaps is his strict observance of his code of honor, which can lead him to follow needlessly difficult paths.

Jesse deeply values honor, friendship, family ties and honesty, but he doesn’t care much about the law. He does his best to be what he considers one of the good guys, but clearly also has a strong roguish streak and a free spirit. His hunt for God was based on his code of responsibility and conduct. God was responsible for creation, but chose to leave it and his responsibilities.

In Jesse’s eyes, God was also responsible for the terror of The Saint of Sinners, injustice on Earth and many other things, and had to be made accountable for his actions. Thus, his very long quest for justice. When somebody deserves a real beating, he does so personally, preferring to use his own fists before using the word.

Jesse prefers to keep his Word in reserve, using it only when he has to. However he has used the word for all sorts of situations before, from ordering a Ku Klux Klan member to ’shit himself‘ to calling in on a radio phone-in show and ordering the guests to tell America what is it they really want, with embarrassing results.

He immediately synched with Cassidy, and they grew into the best of friends. The fact that Cassidy is a vampire was just an oddity. His betrayal shook him hard, but he likely guards the fond memories. Tulip is the only girl he ever really loved, and he would go to great lengths for her sake, although he would not abandon his principles and code to do so.

Most people could not live up to his codes and he is usually rough against those with failings. He treats kindness with kindness, and not much can surprise him in life. In a manner he does follow the Ten Commandments, although his hand is sometimes forced to break them in self-defense or in order to follow his code.

Jesse enjoys good literature, movies, comedy and other down to earth matters. He does drink too much and smoke too much and he has a peculiar habit of sometimes taking advice from the guiding spirit of John Wayne. Only Jesse can see him, and he will have the visits only when he’s alone.

Wayne may be a ghost, but more probably he is a hallucination created by Jesse as a way of coping with his extreme childhood.

(About the Word) “It’s like a gun, you keep it in reserve and only bring it out when you have to, that’s good. When you start waving it in a receptionist’s face, that’s bad.”

“That’s what God is there for, when you’re beaten, when you haven’t an ounce of fight left in you, when you just can’t hack it by yourself anymore : you turn to Jesus or you stick a gun in your mouth.”

“The guy who taught me to fight was the same guy who shot my dad in front of my eyes. That will tend to focus your concentration.”

“I’m sayin’ you’re the kind of guy who’d crawl through a perfectly good whorehouse to get to a fat boy’s ass.”

Go ahead and insert him as is. He’s not the type who would join any of the pre-existing groups, as he has his own mission. Occasional appearances with, oh, say Jonah Hex and Vigilante could keep with his cowboy flair and he could also rub shoulders with the mystical community… say, perhaps, Constantine?

In other universes, he’d get along great with Spider Jerusalem and others.

Bonuses and Limitations:
Gadgetry is Limited to vehicular mechanics and maintenance (-2).

The spirit of John Wayne

Ever since his young days, Jesse has some encounters with the imaginary friend of John Wayne. Since Wayne was still alive during those early days, it cannot be a ghost.

John Wayne would later again start to appear from when Jesse had become a minister. He would regularly reappear to give Jesse general advice and notably telling him to leave Salvation because he’s just treading water.

The spirit of John Wayne may also be temporarily summoned by the Player, to give information about the future, by using the Premonitions Subskill or about current, unknown facts (Occult Knowledge). All such Subskill uses have half the normal Premonitions cost (through his Genesis Premonitions miscellaneous advantage).

Some of such information can also be obtained through the province of his Awareness power. 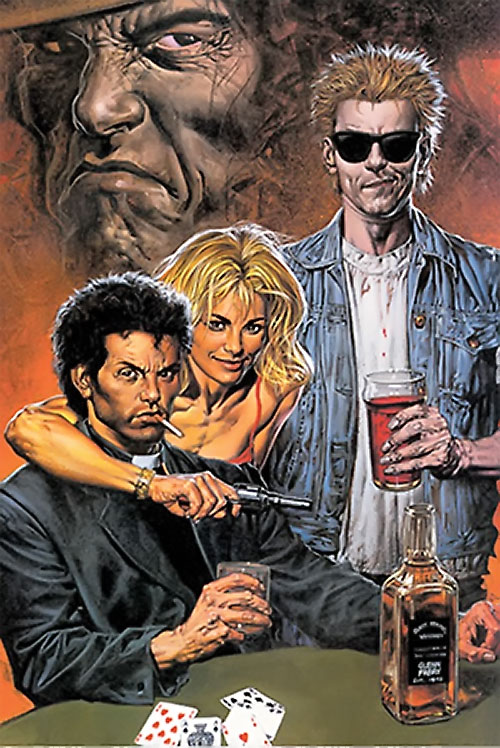 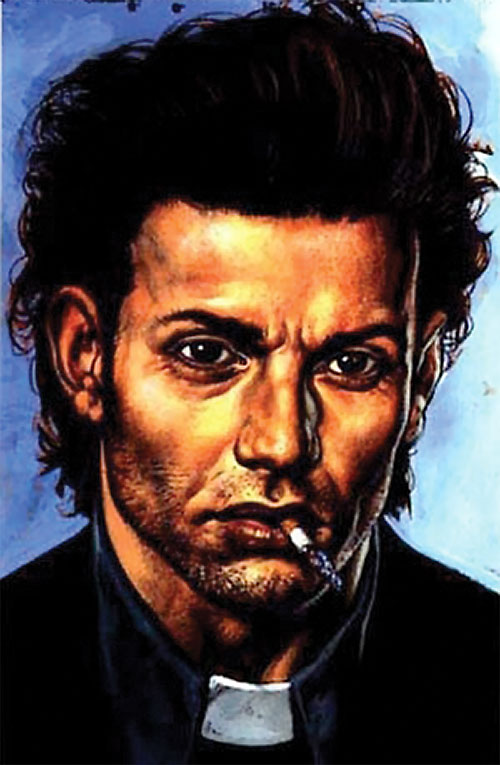 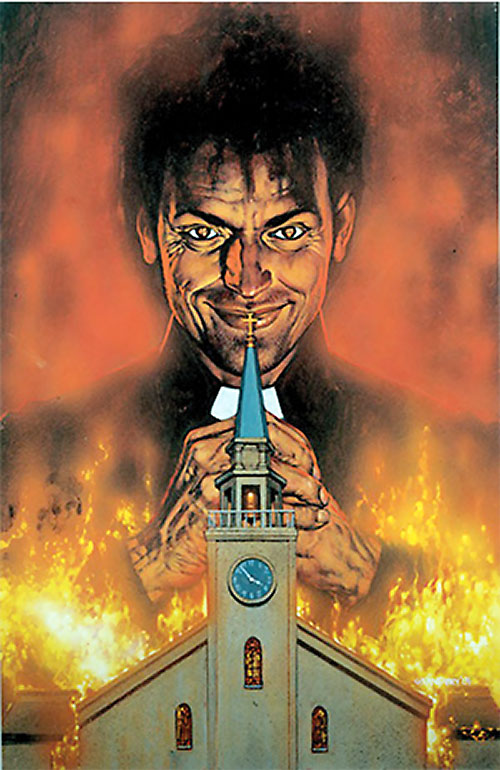