Predator 2 was a 1990 movie sequel, starring Danny Glover. It takes place in a dystopic near future, with another alien Predator clashing with the LAPD.

The movie was somewhat successful, and has become something of a minor cult classic. But of course, it exists in the shadow of the first, landmark movie.

Detective Harrigan has two decades of experience in policing the streets of Los Angeles. At least some of that time was spent in the most violently crime-ridden parts of the city.

The movie was shot in 1990, and the story was supposed to happen in the near-future of 1997. It was specifically explained that Predator II occurred ten years after the events in Predator I. Of course, 1997 is now well past, and turns out to have been different from the 1997 described in the movie.

Michael Harrigan was a career cop. He had served with the LAPD for 18 years as of 1997. During this time he has had numerous complaints filed against him for excessive force. He destroyed 11 patrol cars and a city bus (among other things).

At the same time, he also earned 10 Commendations for Valor and had the best felony arrest record in department history.

He met fellow officer Danny Archuleta during his third year on the job. They became close friends thereafter, partnering together whenever they could arrange it.

The heat is on

In 1997, Los Angeles had become a combat zone. A heat wave and battling gangs combined to make downtown LA a small piece of hell. Harrigan and his fellow detectives at LAPD’s Metro Command were hard pressed to control the on-going war between the Columbian and Jamaican drug gangs. 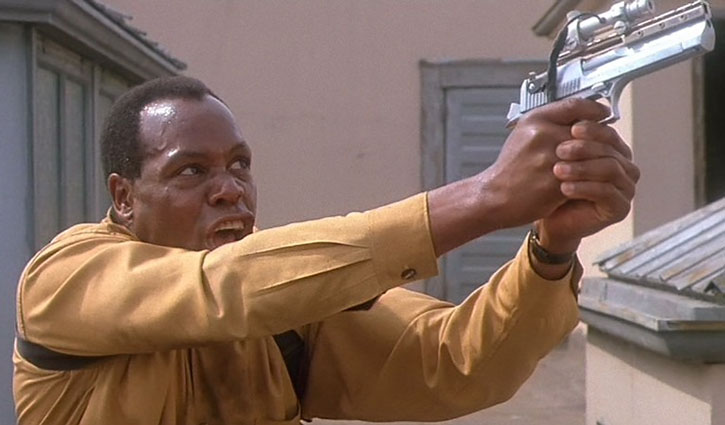 A new factor soon entered the mix. An extraterrestrial hunter came to Los Angeles looking for human trophies. This predator took its challenges whereever it could find them, attacking gang members and police alike. It took a particular interest in Harrigan after seeing the heroic detective in action.

The Predator stalked Harrigan. It killed the people around him and taunted him with its presence.

Stalking with the alien

At the same time, a federal task force had come to town chasing the predator as well. The task force had tracked the Predator back to its local lair, a slaughterhouse, and prepared an ambush to capture the alien and its technology.

The government agents intercepted Harrigan as he followed the Predator back to the slaughterhouse, seeking to keep him from interfering with their operation. The Predator became aware of the trap before it could be captured and killed the federal agents.

Harrigan rushed into the slaughterhouse and engaged the Predator one-on-one. After a brutal back and forth that deprived both fighters of most of their weapons, they found themselves trapped on a ledge. The predator dangled over a several-story fall. Realizing it had lost, the alien attempted to detonate its self-destruct device.

Harrigan managed to lay his hands on one of the Predator’s weapons at the last second. He used it to cut the Predator’s left forearm off and destroy the self-destruct device. 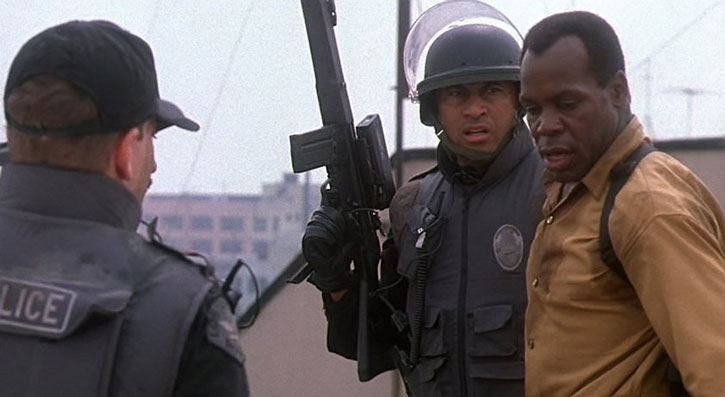 Despite his injuries, the Predator managed to escape, with Harrigan pursuing it. Chasing the Predator through a tenement, down an elevator shaft, and into its hidden ship, Harrigan confronted it one last time. The battle was close, but Harrigan finally managed to kill the Predator with its own weaponry.

After the battle, a dozen more Predators appeared. Apparently impressed by Harrigan’s bravery and skill, one of the Predators gave Harrigan an ancient human flintlock pistol as a trophy. The Predators then blasted off, leaving the battered but unbowed Harrigan behind.

About the flintlock pistol

The pistol is inscribed with the name “Raphael Adolini” and the date 1715. Raphael Adolini  was a famous Barbary pirate whose ship, the Black Death, flew a red flag instead of a jolly roger to indicate death to everyone the crew captured. The phrase “Dead men tell no tales” may have originated with Adolini.

One of his most prized possessions was a flintlock pistol. It was taken from Ivar the Boneless after Adolini plundered the Viking’s ship in 1715. Adolini vanished in 1718, his ship found abandoned east of the Bermuda Triangle.

The Dark Horse Comics story 1718 depicts how the Predators acquired the pistol. A Predator observed Adolini fighting his mutinous crew on an island and, impressed by the captain, fought by his side using only a sword. After they defeated Adolini’s crew, the predator challenged Adolini to a one-on-one deathmatch.

But one of the crew had not yet perished from his mortal wounds and shot Adolini in the back. The Predator finished off the crewman and Adolini bequeathed his pistol to the Predator, muttering, “Take it,” with his dying breath .

A Predator would use these same words almost three hundred years later when giving the pistol to Harrigan.

HD version of the trailer.

Harrigan is a tall Black male with an imposing stature. He has close-cropped hair with a receding hairline.

This assessment may be overly critical. While Harrigan does respond very forcefully, he was only shown doing so against opponents who were already using lethal force against himself and his fellow officers. Likewise, he takes his job very personally and is extremely driven – but describing him as obsessive might be overstating it.

Like most police, Harrigan is very protective of his brothers and sisters in blue. He emphasizes their responsibility to protect one another, rewarding teamwork with praise and being very critical of mavericks. He does see LA as his turf and is defensive about superiors questioning his work or larger agencies taking over operations in his district.

Mike has a fear of heights. This made the acrobatics he had to practice in the pursuit of the Predator particularly challenging. Despite his phobia, he pressed onward, refusing to let it stop him.

(After shooting El Scorpio off of a roof, dropping him onto a picnic table)
Cantrell: “So, what happened to El Scorpio ?”
Harrigan: “Ahh, he’s out front having lunch.”

Captain Heineman: “Now, you were told this was a federal matter. Yet you disobeyed a direct order to stay out of the building.”
Harrigan: “Don’t let this get out, Phil, but it’s a fucking war down here.”
Heineman: “You’re a soldier and you take orders. Now don’t push it.”
Harrigan: “I’ll push it as far as I can, every day, Phil, ’cause we’re fighting for our lives down here and you’re downtown pushing pencils and kissing ass ! I don’t roll over for anybody, especially the feds, without a good goddamn explanation !”

Harrigan: “This is what I call the speech, kid. It’s the only one I got and I only give it once so pay attention. ’Til now, it’s all been fun and games, cops and robbers, Dunkin’ Donuts. But you’re in the shit now. Metro Command is a war zone.”
Lambert: “Lieutenant, I’ve paid my dues. I had to bust my ass to get my transfer.”
Harrigan: “And that scares the shit out of me, kid. No one requests to come down here unless they’re lookin’ for a reputation. There’s no room for showboats or anyone lookin’ to prove themself. I won’t stand for it. Now don’t get me wrong, we need good cops down here and they say you’re good at what you do, but the team comes first. You live by that and you’ll be okay. And we’ll all be there for you. Remember, the door swings both ways. That’s it.”

Harrigan: “Listen, shithead. I don’t give a fuck who you really are or what you want with this asshole. Because now it’s personal and he’s a dead man.”
Keyes: “The concept of what you’re dealing with is way over your head.I’m warning you…”
Harrigan: “You don’t know what *you’re* dealing with and I’m warning you. Stay the fuck out of my way !”

(Harrigan almost bowls over an old lady chasing the Predator as it smashes through her tenement apartment)
Harrigan: “It’s all right, I’m a cop.”
Old Lady: “I don’t think he gives a shit.”

(After Harrigan defeats the Predator, a dozen more surround him. He simply shrugs.) “Okay. Who’s next ?”

Garber: “Goddamn it ! We came so close !”
Harrigan: “Don’t worry, asshole. You’ll get another chance.”

Gotham City has seen several visitations from the Predators. Oo moving these events there is simple enough. The events above would have been the first visitation, coincidentally taking place during a brief period when Batman was absent.

Harrigan could also be imported separately as a tough cop in any urban jungle. Since Gotham City tends to be the default for these things in the DCU, a more innovative choice such as the Question’s Hub City or Black Lightning’s Brick City might be better.

Detective Harrigan had a High Connection to his partner Detective Danny Archuleta up until Danny’s death at the Predator’s hands. 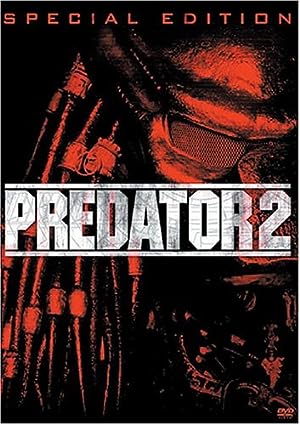 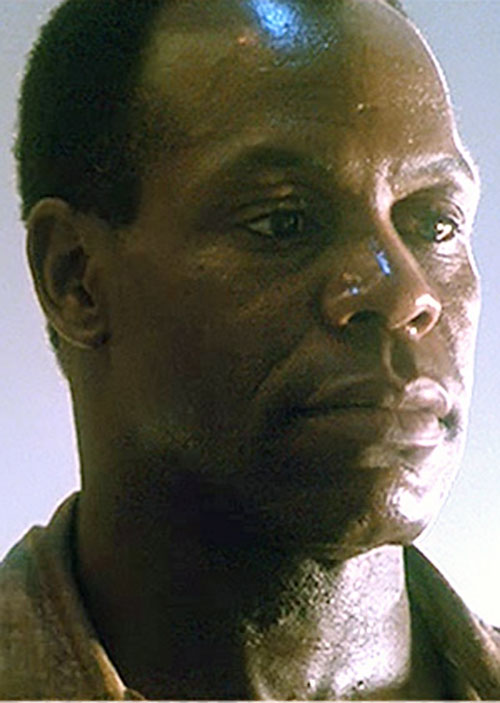 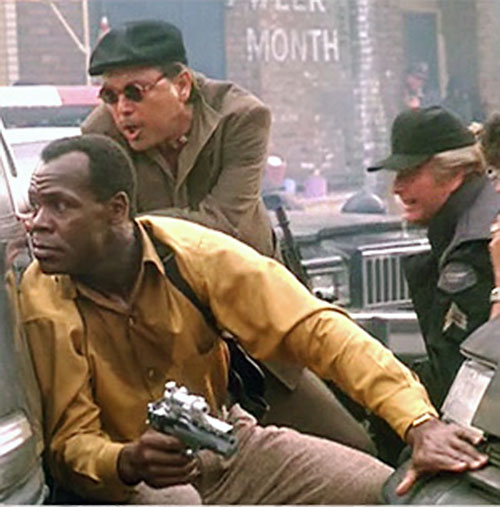 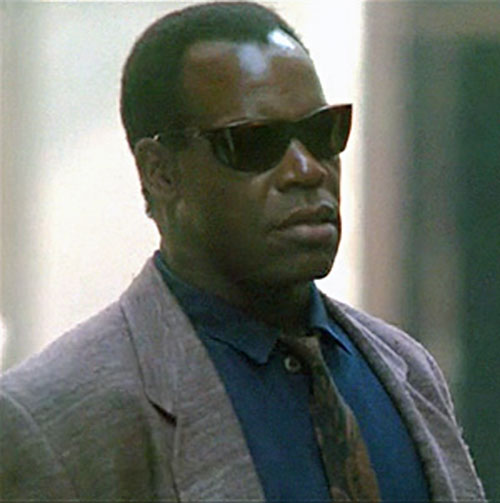 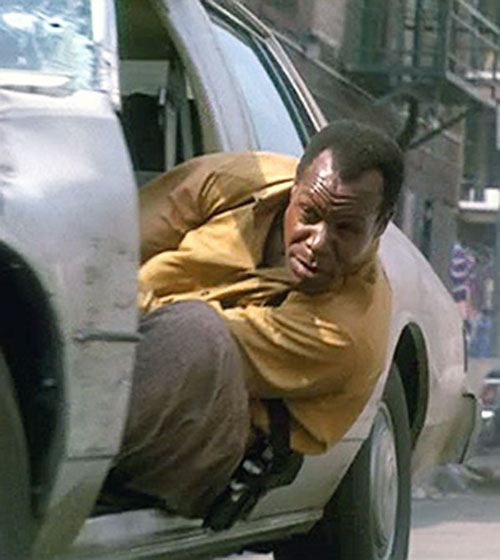 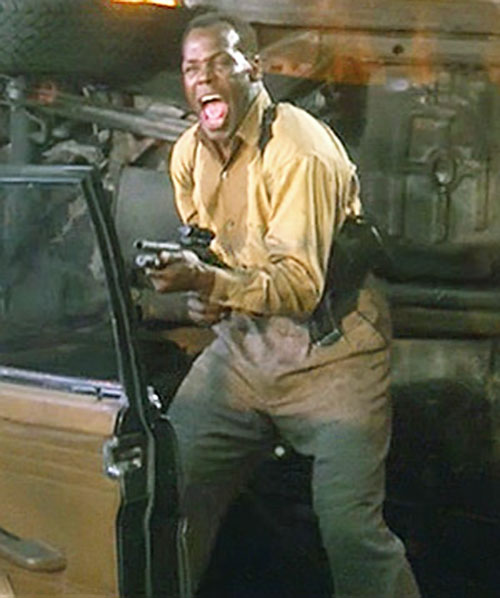