Dutch Schaefer is a career military man with over 15 years of experience in organizing, implementing, and commanding covert military operations, specializing in hostage rescue.

He is highly intelligent and adaptable, and has an impressively-developed physique.

(Most of the early history – except for Schaefer and Dillon being at Huế – is speculative.)

Alan “Dutch” Schaefer entered army officer training after graduating high school, and went to Việt Nam as a Lieutenant. There, he worked his way into the Special Forces and participated in the Son Tay raid, Operation KINGPIN in 1970.

This was an operation intended to rescue American POWs held in North Việt Nam. The mission was well executed, but failed regardless. The POWs had been moved some time ago.

In 1972, during Dutch’s third tour in Việt Nam, he worked with an up-and-coming young officer named Dillon. After the battle of Huế that year, they both picked up identical souvenir Zippo lighters.

Dutch discovered he had a talent for hostage rescue and remained in the Special Forces. He eventually joined the newly developed Delta Force in the late 70s. This was a military unit specifically designed to intervene in hostage situations, specifically those carried out by terrorists.

When Operation EAGLE CLAW was begun in 1980, Dutch was looking forward to a chance to redeem the failures of the Son Tay raid. Unfortunately, EAGLE CLAW ended in disaster, with the transport helicopters demonstrating too high a failure rate to be relied upon and an accident at the Desert 1 staging area killing 8 men.

In the aftermath of the failure at Desert 1, Dutch resigned. He couldn’t stand to see another operation ruined by poor intelligence and bad planning, all of which was exacerbated by military politics.

After he left the army, Dutch recruited some old friends of his with similar feelings of dissatisfaction and set up a mercenary unit specializing in hostage rescue. Dutch’s team carried off numerous successful missions after its inception.

The most famous of these (relatively speaking, since the team’s involvement was a secret) was a rescue in a Berlin embassy where Dutch’s team blew the entry points on 3 floors and neutralized the opposition in 8 seconds flat.

Soon after that mission, in 1987, Dutch and his team were asked to rescue government officials from a US-friendly government that had been captured by guerrillas. Dutch’s old acquaintance Dillon was there, representing the CIA, and insisted on accompanying the team.

As they moved in they encountered signs that something was not right, including the bodies of another US Army team about which Dillon claimed to know nothing. Nevertheless, Dutch’s team pressed on and neutralized the guerrilla camp, only to find that Dillon had duped them into destroying the staging camp for a planned invasion.

Despite the duplicitous nature of the mission, it was still nothing out of the ordinary, until a mysterious being started killing Dutch’s men one by one. After losing Hawkins and Blain, Dutch’s team tried to organize an ambush, which failed to stop the “Predator”. Mac and Billy died trying to kill the creature.

The Predator shot Poncho and Dutch escaped by chance, falling into a river and being concealed by a thick layer of mud that stuck to him when he climbed out. 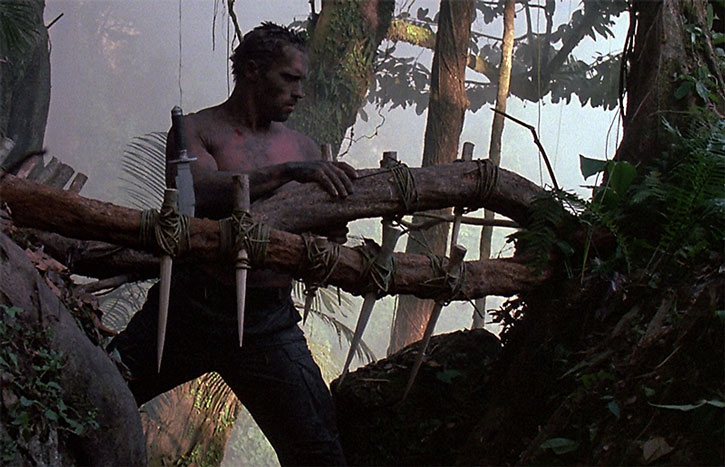 Unlike most men, Dutch chose to stay and fight instead of running. Taking advantage of his presumed death, he prepared primitive weapons and booby traps for the monster. The next night, he roared a challenge into the forest primeval, and he and the Predator stalked one another.

He was finally cornered and the creature challenged him hand-to-hand, inflicting a savage beating on Dutch. Dutch managed to lure the Predator into one of his traps. The beast was mortally wounded, and triggered its self-destruct device. Dutch managed to escape the explosion and was recovered by an Army helicopter.

After an extensive debriefing, Dutch excused himself from military custody. After visiting his brother in New York, Dutch disappeared. His current whereabouts are unknown.

Dutch has a very muscular build and moves with the grace of a trained athlete. His hair is worn in a military brush cut. He wears clothes appropriate to the occasion, whether it is standard civilian attire or loose-fitting comfortable military fatigues.

Dutch is dedicated to keeping his men alive and accomplishing the mission while maintaining certain professional standards, such as being honest with his troops. He has great distaste for the political foolishness that sometimes goes with intelligence work and military bureaucracy. Yet he can keep a calm head and deal with such distractions as efficiently as possible.

He prefers the “purity” of hostage rescue, boasting that his men are a “rescue team, not assassins.” Dutch prefers to give colleagues past and present the benefit of the doubt, sometimes to his regret, as it was when he trusted Dillon during his team’s final mission.

“We’re a rescue team, not assassins.” 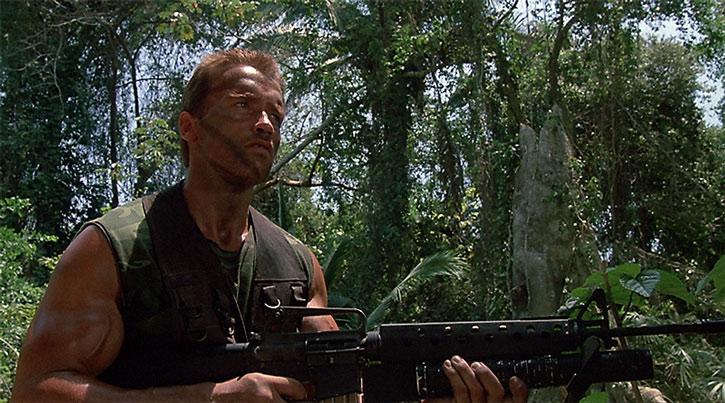 Dillon: “You’re an asset, an expendable asset, and I used you to get the job done. Got it ?”
Dutch: “My men are not expendable, and I don’t do this kind of work.”

The events of Predator are not in any way contradictory with the DCU and can be used as they occurred. Dutch can be used as an experienced military field officer in a hostage rescue situation involving the PCs. You could involve his battle with the Predator as well, making him an advisor if the same aliens should make an appearance in your campaign.

For example, in Concrete Jungle a group of Predators arrived on Earth apparently looking for Dutch, to test themselves against an opponent who had demonstrated great ability. 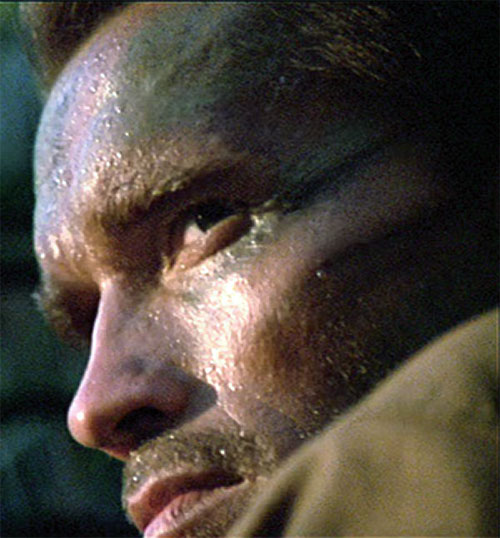 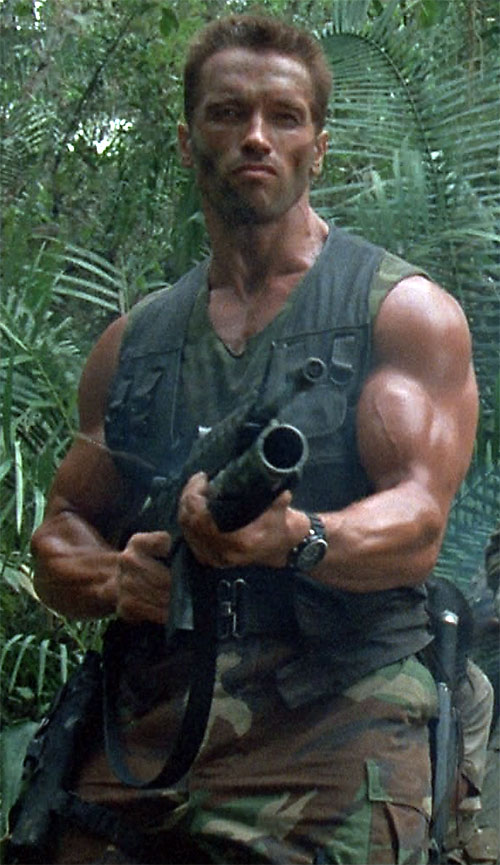 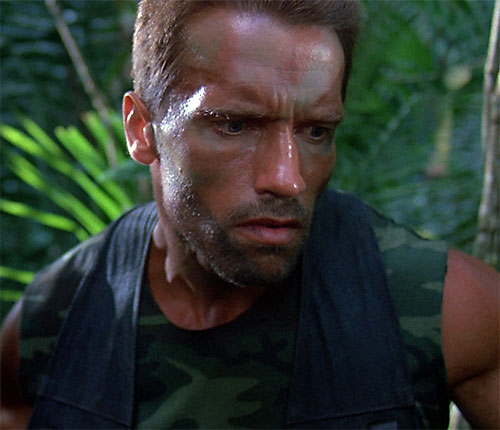 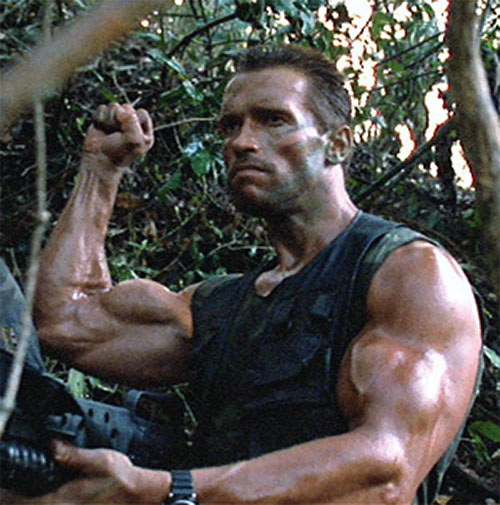 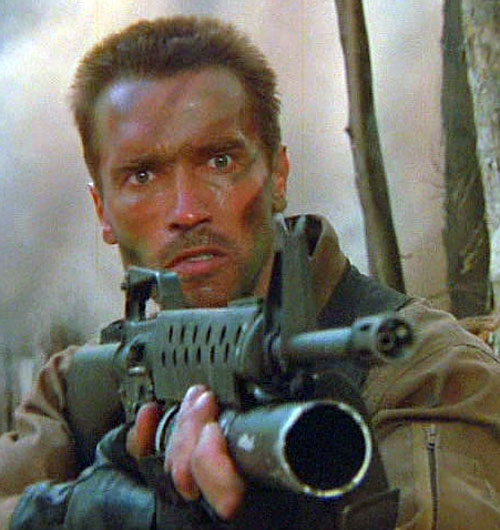 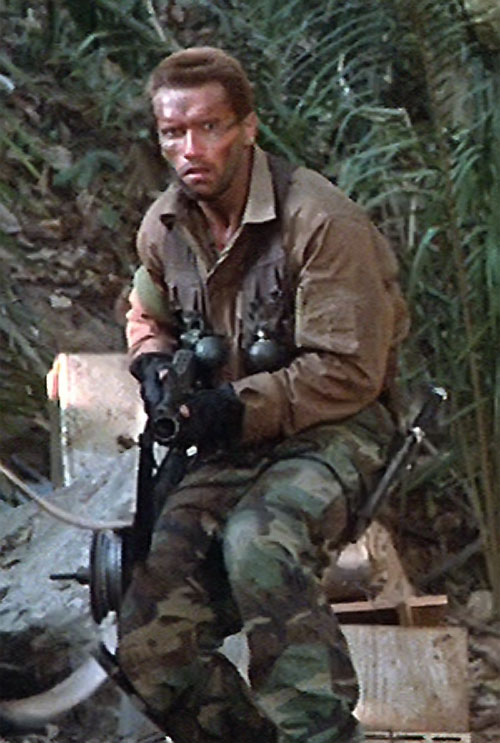 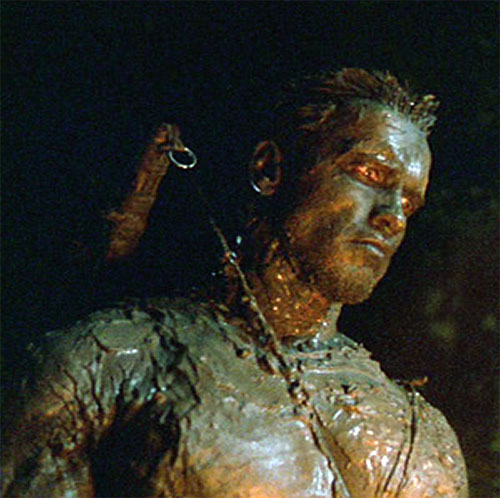