The Predator was a deadly, powerful and extremely agile fighter.

He was ruthless, and very intelligent. The Predator had a great understanding of tactics, whether in the field, the courtroom or the boardroom.

The Predator was an odd manifestation of Carol Ferris powers, which happened after a long string of defeats in :

In some never-replicated incident, Ferris split into two beings. One was a more peaceful, happy Carol Ferris. The other was the new, never seen before, Predator. Carol apparently manifested the Predator as she felt that, as a woman, she wasn’t strong, aggressive, direct and brutal enough to overcome all the problems she was struggling with.

At any rate she regarded the Predator as the “masculine”, aggressive site of her personality. The Predator was going to make everything alright.

Most of the Predator’s wrath was directed at Congressman Jason Bloch, still trying to ruin Ferris Aircraft. Predator defeated Bloch’s agents, the Demolition Team. He then killed Bloch, before establishing a multinational corporation called Con-Trol in order to regain full ownership of Ferris.

For a time, it seemed nothing could stop him. The predator defeated Eclipso when he attacked Ferris, fought Hal Jordan when he came back and started to court Carol Ferris before kidnapping her. Ms. Ferris was too much in love with Jordan to the Predator’s liking.

When Jordan found the Predator and Ferris where she was abducted, they oddly merged together to become Ferris’ third persona, Star Sapphire. The Predator was not seen again for a while.

The following history was added just before the Emerald Twilight storyline. It is a bit… surprising and may not be considered cannon by all GMs… John tried to summarise it without looking too sad:

The short version is that a Maltusian named Daalon was father to the Triarch. Being good god-children, these killed their father, and left the planet guilt-ridden. Daalon’s blood either figuratively or literally created “demons”. Well, highly-powerful fighting types, at least. These sought vengeance on Maltus.

Now think about this one. On the one world where immortal, omnipotent beings evolved, the demons are about as imposing as Bruce Wayne, minus the Batman mystique…

One demon, the Predator, refused. He considered the newly-formed Guardians of the Universe to be responsible for the actions of the Triarch. He, therefore, decided to take his battle closer to Oa, rather than risk innocents.

It would appear (John’s speculation here) that the Predator, after some time during which he either fought the Guardians up-close, or stopped to consider his best approach, decided to strike at the Guardians through their now-top agent. Namely, Hal Jordan.

So when the time comes, Carol will turn to Star Sapphire again, give birth, and vanish from Carol’s life forever. Well, I seem to remember that she promised this to Hal. And the Predator will be a daddy.

While Star Sapphire is the “bad woman” (seductive, spiteful, mean, petty, wanting to be in control, etc.) the Predator is not really the “bad man”. He’s just a badass.

While brutal, ruthless and straightforward, he feels much more in control than Sapphire does. This makes him, in many ways, more lenient and less cruel than Sapphire. He will not generally indulge into unnecessary cruelty, and made a point not to really hurt Carol’s friends.

The Predator expressed all of Carol’s subconscious drives. Such as a resentment for Hal, a desire to protect Ferris Air and so on. One of the weirdest points of the Predator is that he was in love with his feminine half — Carol — especially as she had been released of much of her anger by the Predator’s appearance.

By Ray Winninger for Mayfair ; v1.1 upgrades and 3rd edition conversions by Sébastien Andrivet ; addendum to the history (v1.2) by John Colagioia as edited by S.A.. 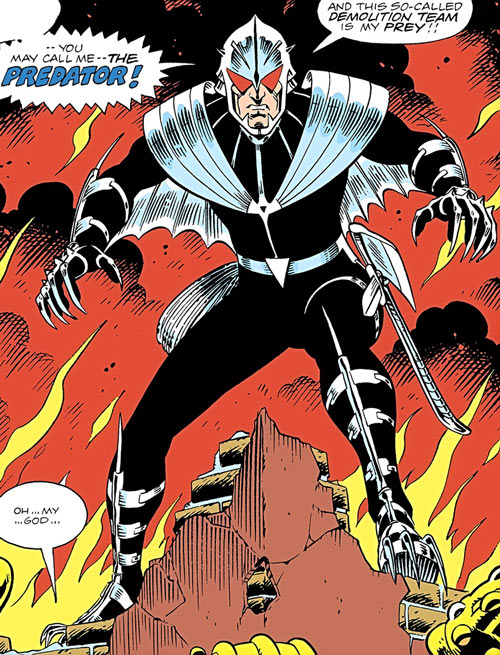