John F. Kennedy was an skilled Naval Officer during World War II. But once the war ended, his military skills took a back seat to his political career.

His charisma and his reputation for heroism and honesty were his primary assets during the latter.

After being kept out of the Army due to his bad back, John F. Kennedy joined the US Navy. He served desk duty until the Pearl Harbor Attack, after which he was trained for PT Boat  duty. He commanded PT109 until it was rammed by a Japanese destroyer.

Kennedy and his crew swam several hours to the first island he could find. Kennedy himself towing an injured crewman by a life jacket with his teeth. Later, on another vessel, PT59, Kennedy and his crew rescued 40 Marines from Choiseul Island . He was discharged shortly before Japan surrendered.

From 1946, John served as Representative, then Senator from 1952. He was then nominated to run for Vice President in 1956 on Adlai Stevenson ’s ticket, but lost the nomination. By 1960 he gained the Presidential nomination for the Democratic Party. He won by a comfortable margin, with 303 Electoral Votes over Richard Nixon ’s 219, due in part to superior skill at televised debating.

Kennedy’s tenure as President was highlighted by:

John was a heavy advocate of civil rights and liberties, and space travel.

John Kennedy also conducted a number of secret affairs with several women. Most famous of these were Gene Tierney  and Marilyn Monroe .

When Jon Yarborough tried to uproot John Connally and the other Conservative Democrats’ hold on Texas in favor of progressive Liberalism, President Kennedy went to Dallas to smooth over the conflict. However he was shot in the head as his motorcade passed through Dealey Plaza. The gunman was Lee Harvey Oswald, firing from the Texas Schoolbook Depository.

To this day, speculation runs rampant about who, if anyone, might have conspired with Oswald. And whether he was in it voluntarily, under coercion, or even if he thought he was acting alone. Everyone has a theory about that day, including most Gamemasters (I have proof that it was Dan Didio – Ed.).

John F. Kennedy was heavily focused on the future. He was a firm believer in abandoning all prejudice on any grounds, in furthering the advancement of science and technology, and cultivating all the abilities, physical and mental, of the American people.

“I believe that this nation should commit itself to achieving the goal, before this decade is out, of landing a man on the Moon and returning him safely to the earth.” (to full Congress, May 25, 1961).

“For a city or a people to be truly free they must have the secure right, without economic, political or police pressure, to make their own choice and to live their own lives.” (to UN General Assembly, Sept. 25, 1961).

“Terror is not a new weapon. Throughout history it has been used by those who could not prevail, either by persuasion or example. But inevitably they fail, either because men are not afraid to die for a life worth living, or because the terrorists themselves came to realize that free men cannot be frightened by threats, and that aggression would meet its own response.” (to UN General Assembly, Sep 25, 1961).

“World peace, like community peace, does not require that each man love his neighbor—it requires only that they live together in mutual tolerance, submitting their disputes to a just and peaceful settlement.” (American University Speech, Jun 10, 1963).

In 1941, Ian Karkull sent super-villains to kill all future Presidents alive at the time. However, the Atom and the Sandman saved Kennedy.

In 1963, Superman entrusted President Kennedy with his secret identity so he could impersonate Clark Kent and preserve his secret. Superman said afterwards: “If you can’t trust the President of the United States, who can you trust?”

Kennedy asked Superman to help him inspire the American people to exercise more than they had been of late. Their campaign succeeded for a while, but at this writing, its success is seriously limited.

In the comics of the 1980s, Kennedy was in office when Superboy first created his signal lamp. He thus became the first President to be able to summon Superboy by this means.

In neither case were Kal-El’s whereabouts chronicled at the time of Kennedy’s murder.

During his time in the field in World War II, Kennedy’s stats would have looked more like this:

These M&M details use a more traditional statting style than our usual. 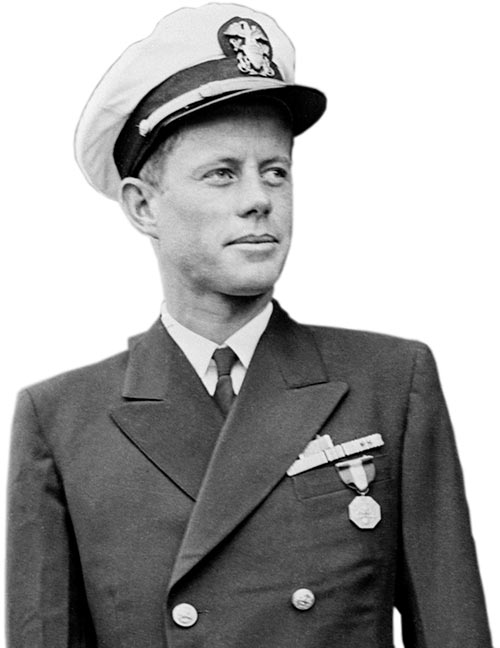