Richard Dragon, Kung Fu Fighter was a 1975/77 DC Comics series. It wasn’t a victim of the DC Implosion (that was in 1978), but the tone was fairly close to that of the DC Explosion era. It’s possible it would have been forgotten had it not been written by a young Dennis O’Neil.

The Preying Mantis was a minor villain in the book, seen for but a few pages. It might be interesting to bring him back – after all, he did fight two of the greatest martial artists of his generation.

Despite his insect-like appearance, the Preying Mantis does not seem to have any superhuman power. It is possible, but not clearly demonstrated, that he might have some night vision or leaping ability.

The Mantis is fascinated by insects, and learning to fight by watching them. His style is remarkable close to insect-themed kung fu styles such as, of course, the Mantis Kung Fu school. While he’s clearly no match for Richard Dragon, he can easily beat up most people, even well-trained ones.

The Preying Mantis seems to have originally been an American man, born a freak of nature – with green, slightly chitinous skin and an insect-like head and features.

When it became clear that no doctor could improve on his fearsome visage, he decided to exile himself from society and truly live as a monster. He settled in the wilderness of the Caribbean island of San Lorenzo. There, he started assaulting American travellers to steal their belongings.

The San Lorenzo tourism board, for whom having more American visitors was critical, put a contract on the head of the mysterious bandit. The mysterious organization named GOOD and its representative, Barney Ling, heard about the reward and enticed Richard Dragon and Ben Turner into solving the problem for them, in exchange for intelligence.

From there Dragon contacted Lady Shiva, who eagerly joined, spoiling for a fight.

Dragon et al interviewed tourists. One drew the monster, whom the party named the “preying mantis”. However, another group of bounty hunters was in San Lorenzo for the money. These attempted to interfere, resulting in severely bruised bounty hunters.

Dragon and his companions easily located the Mantis. Dragon attempted to convince him to come back to civilisation with them. As the freak refused, the bounty hunters came back, this time with weapons. While Dragon subdued the aggressive Mantis, Turner and Shiva took care of the bounty hunters.

Presumably, the Mantis was handled to either the San Lorenzo authorities or GOOD. He was never seen again.

The Mantis is a boundlessly bitter bandit. He lives alone in the wilderness.

He’s so obsessed about his face that is basically his master weapon – he wears a monk-like hooded robe, and always make a big show of unhooding to show his face, usually to the shock of onlookers. In fact he seems to revel in it.

The Mantis is very articulate, even melodramatic. But despite the elaborate speeches, he wants to behave like a monster, as people expect of him.

His bitterness is such that he rejects any humane behaviour. When Dragon prevented him from accidentally falling to his death, the Mantis fiercely attacked as soon as Dragon had pulled him to safety, loudly claiming that he knew no gratitude.

Mantis : “The ’something else‘, as you say, is myself — and I’ll trouble you for your valuables !”
Turner : “Sorry, brother — you don’t look like a united fund representative to me !”
Mantis : “You are stubborn ! The sight of my face will change your mind ! Am I not a loathsome sight ?”

“Gratitude is foreign to me !” 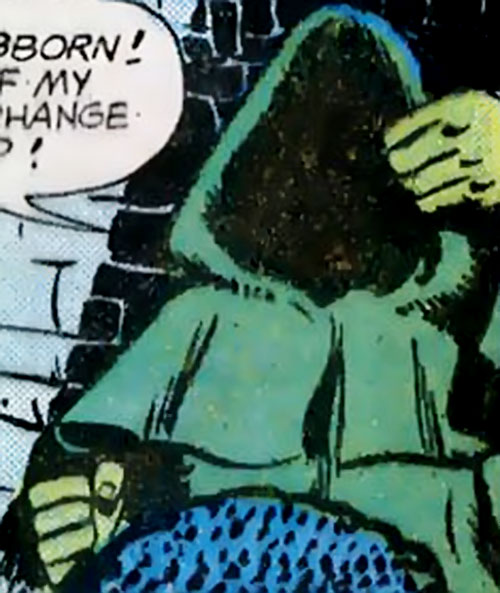 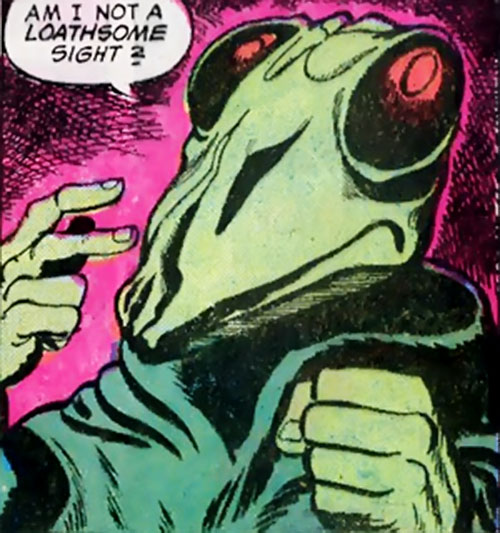