Adam can turn into a big, tough lizardman.

He’s a bright student with a strong interest in science, especially genetics.

Adam Berman is a straight A student, highly interested in science. He reads most of the material published by Professor Xavier and Doctor Henry McCoy. He also happens to be a low-powered mutant.

He attempted to join the school ran by Sean Cassidy and Emma Frost, but his application was turned down. Yet Berman was fascinated by the exceptional curriculum available at that school. The best and brightest researchers in genetics worked there. Thus, he tried to get into the campus without an invitation to talk to Sean Cassidy.

Berman thus stumbled upon an incident there, and discovered that Cassidy was a mutant. However, Berman accidentally transformed into a lizardman and decided to flee. Cassidy’s staff soon determined that Berman was a mutant.

Cassidy went to Berman’s school the next day. But the youth had already been targeted by a Sentinel Prime. As a public relation stunt, the Sentinel forced Berman to morph into lizard form and attacked him in the classroom. Cassidy drove the Sentinel away, likely saving the young mutant.

Berman attempted to continue with his life even though he had now been outed as a mutant. He has not been seen since. He may have since been depowered as most mutants were.

A smart teenager, a bit more mature and good-natured than most.

“Sometimes all I wanna do is morph and lash out jerks like him, but that’d just get me killed by some genetophobic mob, like it did that kid Dennis Hogan.”

In the DCU he might have been a baby mutated by Kobra — but free of any mental conditioning after heroes rescued him as an infant.

What he could do as a mutant was not explored so I gave him a simple, logical… and almost entirely speculative set of abilities. 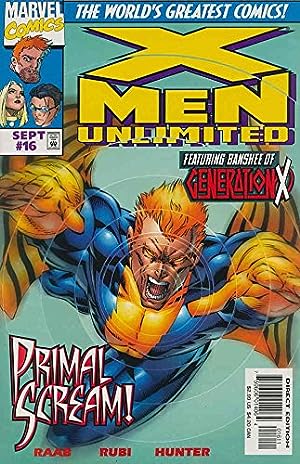