Primat appears to have been enhanced in terms of strength and durability, beyond even the normal strength for a Gorilla City ape person. She could easily snap de-cel  cable wrapped double-thick around her, and lift large vehicles.

Primat doesn’t seem to have the telepathic and/or technological abilities known to exist in some Gorilla City denizens. She does have the superhuman olfactory acuity common in her species, though. In fact, she seems unusually sensitive to smells.

Though she lacks real-world experience, she does seem to be quite smart – like most ape persons from Gorilla City.

Primat is a steady, able hand-to-hand combatant – though she couldn’t touch such superior fighters and acrobats as Nightwing and Robin. She also evidences a good level of initiative and adaptability in combat.

Defensively, she can rely on the sort of shield-plates she wears over her arms and lower legs. She excels at Blocking ranged attacks with those, a bit like a hairy Wonder Woman.

Primat pays attention to people and has a good empathic sense. For instance she’s the one with the most insight about the workings of TVM’s mind. She’s also often the face of the group. Swashbuckler is more charismatic but Primat is better at establishing rapport.

Miss Primat is from Gorilla City, and is a subject of the famous King Solovar.

Primat was a loner and a dreamer, and felt out of place in the real world. She found refuge in Human romance novels, from the Victorian Gothic classics of the Brontë sisters  all the way to trashy Harlequin paperbacks . Primat was always dreaming of love, adventure and passion as she devoured her books (and a lot of chocolate).

Her taste for “humie trash” and her dreams of handsome, virile bodice-ripping adventurers often brought derision from her fellow primates.

Primat was one of the four persons recruited by the “Dark Trinity” (then composed of Morgaine, Enigma and Despero) to act as minor agents. All four recruits were, in their way, expending their life in the pursuit of nigh-impossible dreams. They were thus called the Dreambound.

They were first detailed to stealing a variety of items symbolically tied to the real Trinity (Wonder Woman, Superman, Batman). Though they were successful, disaster nearly struck as one of their own, Sun-Chained-In-Ink, was forced to release the sun inside him. The other three were arrested. 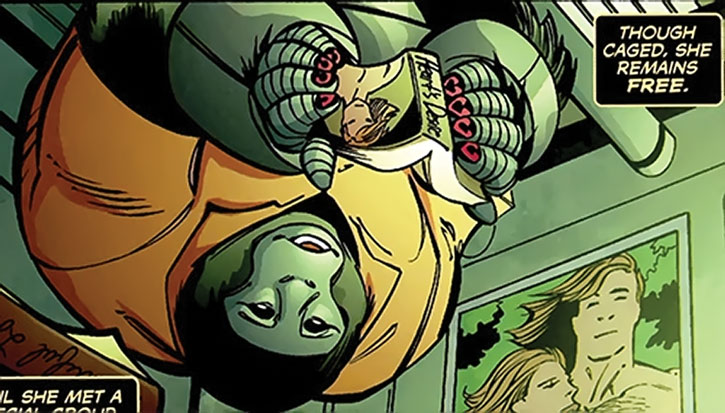 As they were held in special facilities, the reality was rewritten. On this new version of Earth, they recruited the Tattooed Man III (Mark Richards) to become the new Sun-Chained-In-Ink. But though they escaped from prison, they were drafted anew by Morgaine, this time to assemble an army for her.

This army of super-villains, called the Dark Arcana, ended up conquering this recreated Earth against the global forces of the Justice Society International. Sun-Chained-In-Ink was a powerful asset for the Dark Arcana, greatly helping with the conquest.

The three original Dreambound (Primat, TVM and Swashbuckler) resented their condition as slaves and grunts for Morgaine, though. Furthermore, their drab existence was anything but the dream world they had been promised.

After confronting JSI spy the Atom, the trio allied with S.P.H.E.R.E., a construct holding the consciousness of Enigma’s daughter. She resented the Dark Trinity’s reign just as they did.

There was also tension with Richards, who considered the other three to be weaklings and idiots while he was… well, a superstar.

As the godlike Trinity came back to confront the Dark Trinity, the previous reality started re-asserting itself. Thus, the original Sun-Chained-In-Ink emerged from Richards’s tattoos as he was restored to existence.

Happy to be reunited with him, and seeing the empire of the Dark Trinity catastrophically crumble, the Dreambound fled the scene. To their dismay they were forced to abandon S.P.H.E.R.E. as they ran. 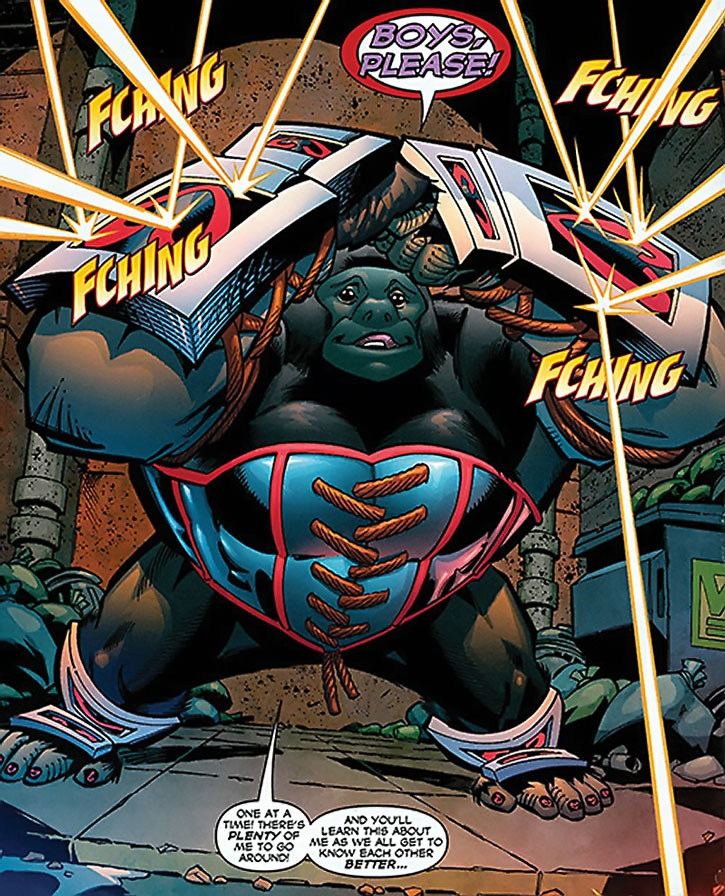 Though they tried to hide, the Dreambound realised that they had to do something. They recruited Konvikt, a fallen member of a previous version of the Dark Trinity. The Dreambound and Konvikt attacked Despero and Morgaine at a critical moment, and Sun-Chained-In-Ink was later a key component of the spell that brought Krona down.

Though the Dreambound were eventually swept aside by Morgaine, and the Earth briefly destroyed, the situation was soon put right.

The Dreambound located the unconscious Sun-Chained-In-Ink in New Zealand, reanimating him and making sure that he was okay. Though they were soon arrested, the various heroes present at the final battle testified that the Dreambound had valourously helped and only served Morgaine under duress.

Thanks to these testimonies, the bizarre quartet was soon freed to find its way in the now-restored world.

The further adventures of the Dreambound have yet to be chronicled.

Primat always wears a pair of brightly coloured razor bows in the fur over head – usually hot pink or cherry red. Though the inhabitants of Gorilla City do not normally wear clothes, when in the field she wears her costume. This is a sort of giant metallic corset matching her arms and legs protective plates.

Primat smells nice and sweet. Presumably, she washes her fur with some sort of perfumed shampoo.

Primat is very excited about having adventures, though she will be disappointed if it’s not glamorous, dashing and romantic enough.

She’s boys-crazy about dashing sapient male primates (including humans). As such she will often comment on how dashing and mysterious super-heroic men around her look – whilst obviously paying attention to their behinds.

Being a gorilla, she pays a lot of attention to how people smell, too.

She talks a mile a minute (to the point of rambling and prattling, since she used to be a loner and is not used to talking to people). Primat always seem happy to meet new people, especially handsome men. She is polite, and has a talent for exchanging pleasantries during combat, though her lack of social skills may result in somewhat odd or inappropriate comments.

She is also prone to hyperbolic statements about loving everyone and wanting to meet everyone, and is generally very positive and empathic.

Primat wants her life to be an adventure novel, where she and her Dreambound friends are the heroes of the tale and do dashing and romantic things because… because… that’s what the characters in the books do.

Primat has no killer instinct to speak of. She will vigorously object to her allies killing anyone, perhaps to the point of baring her teeth. Though they started out as stormtroopers, the Dreambound became benign and even heroic as they got exposed to the evil of their masters – and also became close, loyal friends despite their heteroclite nature.

Primat loves exotic food (anything that’s not African fruits gorillas eat, basically). Preferably in large quantities, with a preference for chocolate. Like most apes she does not seem to eat meat.

Being the woman on the team, Primat fills the traditional Sue Richards role as the emotional core of the group. She’ll cheer up Swashbuckler when he’s gloomy, reach out to T.V.M. when he starts drifting, and anchor Sun-Chained-In-Ink to his humanity.

(As she unexpectedly gets tangled up in de-cel lines by Nightwing and Robin) “Oh, my. This never happened to Jane Eyre…”

(Towering behind Gangbuster whilst lifting a space capsule to crush him) “Hi. Swashbuckler’s just trying to scare you, really. I’d never drop this space-can on your cute little… soft… head. Really. Well, um, I should, though, with you being an enemy and all. But you’re sooo daring, and dashing, with that brooding air of mystery… couldn’t you just surrender ? Really. I’m a lover, not a fighter.”

“A cemetery ? Neat. It’s all gloomy and Gothic — yet kind of romantic, too !” 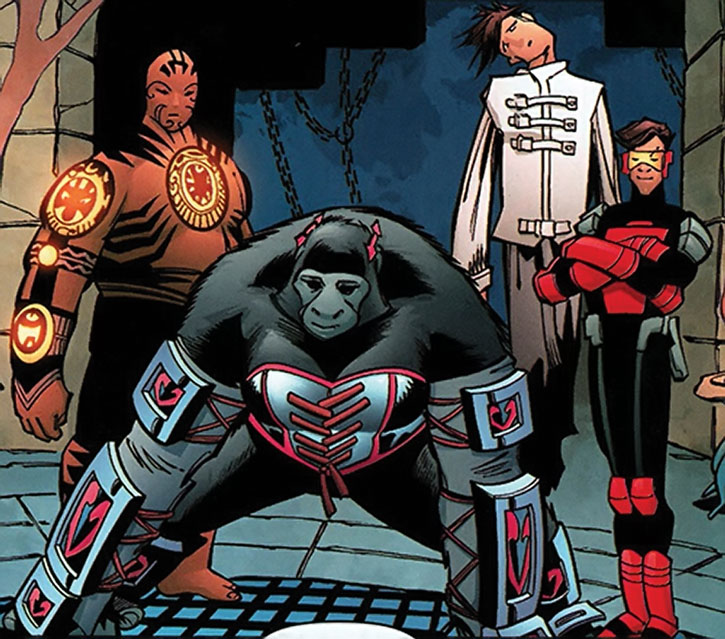 (Giving an impromptu press conference) “We used to be bound by our dreams – chained by them ! But now we’re just like you — we can follow our dreams, live them, and maybe even win them ! We’re the Dreambound, everybody ! We love you all !”

Bonuses and Limitations:
All Powers are Form Function. 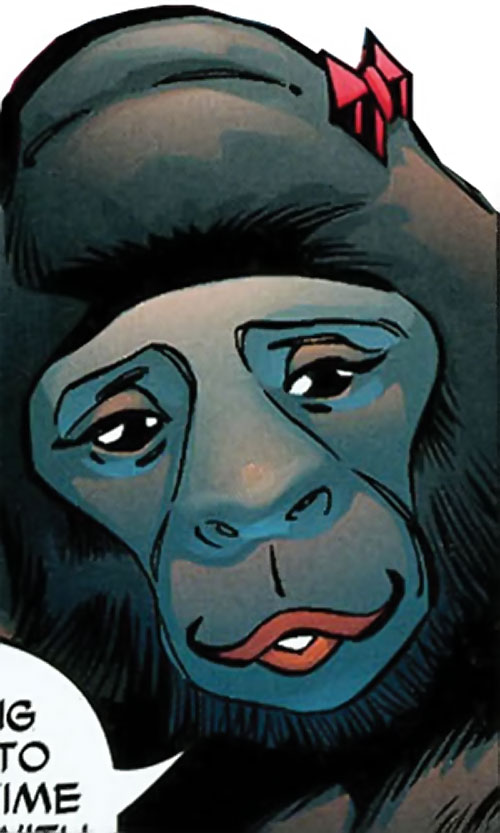