Primus’ psionic  powers act as a solid force. It is projected from his mind in every shape and size, from a complete protective sphere to individual bomb-like power blasts. The distance his projections can reach is unknown, but probably limited to about a quarter mile.

Primus can also use the force to hold any object aloft, including himself, for a limited time.

As a shield, the psionic power is impenetrable.

After extensive use, Primus will need rest before his powers return to full strength.

Primus is a wise tactician and a cautious leader, as well as an excellent combatant.

Born to simple farmer parents in a rural area of Euphorix, Pren had a normal childhood until his early teens. This is when uncontrolled psionic powers began to surface. Such abilities were unknown in the farmer species, though common in the woodwitch species.

Unable to keep his powers hidden, Pren was disowned by his parents. From there he was cast out by his people. Despairing, he wandered into Broadleaf Harbor, where he was claimed by its woodwitch clan.

Lorlady Andren, clan leader, consulted her spiritual leaders, the unseen Old Ones. She thus learned Pren had been chosen by them for great deeds and given psionic potential stronger than the deadliest hex-magic. Andren and Jarr took the outcast in, training him until he could be named by the clan. This is how he became Primus, the One Who Leads.

Primus was invited by Euphorix’s Royal Palace Guard to join that company in the planet’s capital, Phorix. This is where he first met Kalista.

Primus was given the chance to prove his worth when the Citadel first attacked Euphorix. Primus almost single-handedly routed the invaders, using his psionic posers. He then rallied the others to attack. Soon after, a call came from the Warlords of Okaara for new trainees to be chosen from each Vegan world. Primus and Kalista were sent to Okaara together.

On Okaara, Primus proved to be a top student in all fields. This is also where he and Kalista started their relationship. There, too, Primus first conceived his plan for a united force to oppose the Citadel. It would a band of freedom fighters drawn from every Vegan species : the Omega Men.

Returning to Euphorix, Primus and Kalista faced the wrath of her mother, Queen Lykan. Primus was banished from the planet, but not before he and Kalista were secretly married.

Primus travelled from world to world, gathering his Omega Men. Later called back to Euphorix to be named Royal Consort, Primus’ first interest was the elimination of Citadel oppression.

Primus led the Omegans into new battles in the Vegan system, until laid down by deep wounds inflicted by Tigorr. Deserted by Kalista, Primus watched helplessly as Tigorr took command. Tigorr led an attack on Citadel Homeworld that brought an end to the Citadel War.

Primus returned to Euphorix, only to find his way stopped by that planet’s force shield. He engineered the shield’s destruction, endangering all of Euphorix, and turning his people, and is wife, against him. The Omegan fleet dispersed, until the sudden attack by the Spider Guild reunited them in a common cause.

Leading the fleet into battle over Euphorix, Primus went down alone to rescue Kalista from the invaders. He discovered she was already gone, and was himself captured.

Prisoner of the Spider Guild

While being transported to a Spider Guild stronghold, Primus was rescued by a computer intelligence named Artin, created by the Psions. Artin offered to restore Primus’ weakened body in exchange for a symbiotic relationship. Primus would act as host for both their intellects.

Primus/Artin found their combined strengths complemented each other, creating a stronger individual. Reunited with some of the Omega Men, they escaped and found a new home base in another star system, on the planet Kuraq. On the way, Primus and Kalista were reconciled.

Returning to Vega, Artin removed his personality from Primus to a separate robot body. In this way, Primus could travel with Kalista to Euphorix.

Primus was apparently killed during the Invasion while conducting a breakout from the Dominator’s prison. Kalista was later seen grieving over his body. Since that was rather illogical and gratuitous, you might have him survive (for instance, Auron returns and resurrect him, the Old Ones intervene, Doc saves him, etc.)

Bonuses and Limitations:
Primus has a unique Burnout-type Limitation : see below.

If any number of powers is used for more than four consecutive phases, Primus must make an Action Check using the APs of the power to be used in the current phase as the AV/EV and 11 ad the OV/RV, for each additional phase that any given power is used. Failure to obtain positive RAPs means that he may use no powers during this and the next two Phases.

For example, if Primus uses his Mental Blast power during three consecutive phases, then uses his Force Field during the fourth phase, an Action Check must be done on the fifth phase if Primus wishes to, say, use his Telekinesis power. The AV/EV would then be 14/14, and the OV/RV is 11, so he must roll a 9 or better to be able to use Telekinesis during this phase.

The same procedure must be used during any additional phases that any powers are used.

By Ray Winninger for Mayfair, with additional stuff by Sébastien Andrivet. 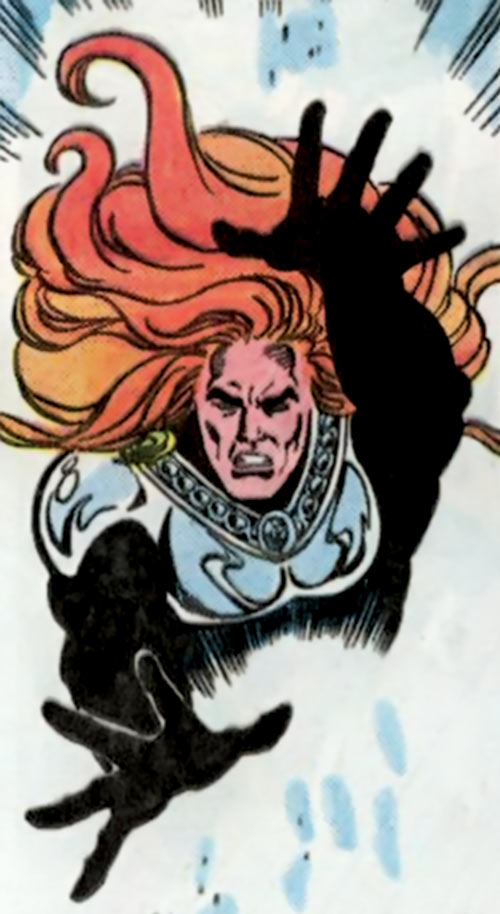