A competent swordsman with an acrobatic combat style, Brandish seems to rely on the abilities of his sword more than his skill.

The Eastermark Blade, or Blade Avictrix, has absorbed a hundred other magical weapons. Thus, it possesses more magical abilities than it has so far displayed.

Brandish also has a number of enchantments laid on him (possibly by Mister Dark). As well as being able to eavesdrop on magical telepathic conversations, he has an enchantment that any harm done to him is instead inflicted on Snow White.

Brandish Descry was the crown prince of the Golden Realm. However, he was cursed by a spiteful dwarf into the form of a bear.

Roaming the forest in search of his tormentor, Brandish befriended the young sisters Snow White and Rose Red.

Later, the sisters unwittingly took the dwarf’s power by cutting his beard to help him out of a fix. As a result, Brandish slew the dwarf and reverted to his regular form. Overjoyed, he swore to marry Snow, and that his brother, Holden, would marry Rose.

His father was less than happy with the prospect. He instead intended to marry off his sons as was politically convenient. He planned to have Snow killed, but was happy enough on hearing she’d died without his interference.

It’s unknown how he fared under the Emperor’s rule of the Homelands.&emsp.But after the fall of the empire Brandish was employed by Mister Dark when he took over Fabletown. 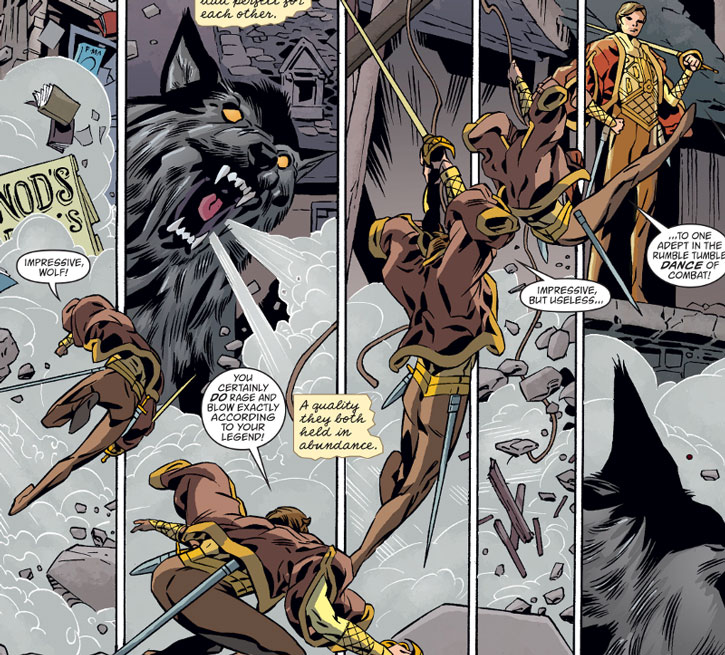 Following Mister Dark’s defeat, the pair pretended to have been his prisoners when Fabletown’s residents returned. Brandish’s deception lasted until Snow finally arrived. At this point he confronted her and claimed his spoken oath meant they were married, her later marriages null and void.

Brandish took her prisoner to force her acquiescence, using Fabletown’s laws and his own enchantments to protect him from interference. He fully expected her husband, Bigby Wolf, to turn up, and planned to kill him and their children.

Bigby arrived to challenge Brandish. Snow purposefully didn’t tell him about the enchantment that inflicted harm done to Brandish onto her instead. Brandish fought Bigby, his magic sword landing numerous small blows which eventually transformed the wolf to glass.

His victory was short lived, as the freed Snow White challenged him to a duel. Even forced to use her off hand due to his having broken her arm, Snow proved the better fencer. She soon had the upper hand.

Brandish, seeing his defeat inevitable, took his revenge. He smashed the glass Bigby into shards moments before Snow killed him.

Arrogant and superior, Brandish is staunchly old fashioned and proper. While capable of pretending to be sociable, he has little real interest in anyone who’s of no use or threat to him.

Cold and ruthless, he had little compunction hurting Snow in order to force her obedience. He fully intended to murder her children – because they weren’t his, but those of an illegitimate beast – to later instead give her good, strong sons of his own.

He appears to have developed an obsession with Snow, even centuries, or millennia, after their meeting. He’s not someone who forgets an oath or a slight.

“You saved me, Snow White, when you cut his beard away. And I shall reward you by marrying you as I promised. Look and marvel ! At long last I can return to my true form. I was never a bear at all, until he placed his evil enchantment over me. I’m actually the prince of a far kingdom, and you’ll be my princess, just as I promised long ago.”

“Too many think informality is more sincere, but just the opposite is true. Too much familiarity, adopted too quickly, breeds contempt and insincerity like damp bread breeds mold.”

“Women are emotional beings and can’t understand the harsh matters of men. That’s why God put men at the head of the family. Sure, you’ll be upset at first, but happier in the long run, when I give you a bushel of new sons and daughters to replace the abominations you’ve whelped. It’s a cleansing act. We’ll scrub the filth from your corrupted womb and refill it with clean human babies.”

“A duel this important should have a modicum of ritual attached to its opening — some refinement, if you will. Try to have a sense of moment.”

“Now, Snow. Settle down. Think it over. This is the serious business of men — not fit for the distaff sex.”