This is the version of fairy tales character Prince Charming, who appears in the Fables comic books.

Those unfamiliar with the setting should first read our Fabletown article for context and orientation.

A highly accomplished swordsman, Prince Charming can also be extremely persuasive. But this is less true with those who’ve known him for any length of time, whom he tends to let down eventually.

It has been theorised that he exudes some form of magical pheromones, which are responsible for his seductive abilities.

Like all Fables, he is extremely long-lived, and is difficult to kill. This is allegedly based on the popularity of their tales.

Once upon a time a handsome prince found the beautiful Snow White in a cabin in the woods and took her as his wife. He promised her anything she wished as a wedding gift, and was surprised when she asked for fencing lessons. Being in love, he eventually agreed.

After a time murdered dwarves began appearing in his lands. Charming initiated an investigation to avoid unrest with the King of the dwarf kingdom beneath his kingdom.

Over the following weeks four dead dwarves were found. The Prince learned they were brothers who shared a diversion cabin deep in the woods with three other brothers. From there, they would abduct local peasant girls.

He discovered the last three dwarf brothers dead in a burnt out cabin deep in the wood. The same cabin where he’d found Snow. Charming went to the jail, where he had a notorious local highwayman executed. The Prince then forged a confession, and sent the “culprit”‘s head to the dwarven king to make peace between their kingdoms.

Charming let Snow know he knew her secret. He then prompted her to invite her sister, Rose Red, to live with them as company for her. She did so. Rose, however, had been hurt by her sister’s departure. After causing trouble in court, she set her sights on Charming.

While initially unwilling, his cooling relationship with Snow — possibly from the knowledge of what she’d done — created an opening. When Snow discovered them together, she left.

Charming later came to the rescue of Briar Rose. She’d been cursed with a contagious eternal sleep that could only be lifted by the kiss of a prince who loved her. They were married, but, after a while, he was again unfaithful, coming to realise this flaw in his character.

Exactly when is unclear, but one of his non-marital dalliances resulted in the birth of Jack Horner, of which Prince Charming is unaware.

This realisation didn’t stop him marrying a third time, to Cinderella. It was as this romance was dying that the Adversary’s Empire reached his lands. Charming and Cinderella were aboard the last ship to flee the Homelands, taking them to the safety of the mundane world.

They were divorced soon after. Charming, most of his fortune lost in flight, was forced to live off the kindness of various nobles.

Having fallen out of favour with European nobility, he returned to Fabletown where he tried to raffle off his title. That didn’t work out as he’d planned. Charming ended up no better than he’d started – but still with the title.

The Prince learned that Bluebeard planned to kill Bigby. Even though Charming realised that Snow had feelings for Bigby, he challenged Bluebeard to a duel. Charming won the fight, killing Bluebeard. He then made a deal with King Cole before Bigby could return to insist on a full trial.

Charming avoided charges, and the Fabletown administration gained control of Bluebeard’s vast fortune. This allowed it to be self-funding, no longer needing to survive on donations.

Charming gained the services of Bluebeard’s servant, Hobbes. He then set his sights on gaining control of Blubeard’s fortune the only way he could: he ran for mayor. He won, mainly on the promise of funding transformations for all non-human Fables. In this way, they wouldn’t be forced to stay on the Farm.

Unfortunately he neglected to check with the Thirteenth Floor witches whether this was possible. And so public opinion turned against him fairly quickly.

With the empire now obviously aware of Fabletown, Charming found another challenge, and a distraction from his broken promise. The preparations for war were quiet at first, and he didn’t rush things to distract ire. But it was only a few years before the entire community was involved.

As soon as operations were ready to commence, Charming stepped down as mayor in favour of King Cole, to become commander of the invasion force instead. He joined Sinbad onboard the airship they used to bombard the portals leading from the imperial homeworld.

They had one left when the imperial forces finally brought the ship down in flames. While most abandoned ship and headed to the assigned rendezvous point, Prince Charming guided the blazing ship into a lake to try and preserve the last bomb.

He was badly burned, but survived and was found by Sinbad. Using some remaining flying carpets, they managed to float the last bomb behind them as they walked to the final portal.

Unable to accurately use a rifle in his state, Prince Charming insisted on dragging the bomb, despite Sinbad’s protests. They finally reached the last portal. While Sinbad held off reinforcement guards, Charming took the bomb in and detonated it, apparently dying in the blast. In actuality he was sent through it to the Indu world.

Confident, friendly and, well, charming, Prince Charming has a way of putting people at ease when he meets them.

Unfortunately this seldom lasts. He’ll soon be regarded as a complete pig and golddigger.

He’s very goal-oriented. Whether it be wooing a woman, waging a war, or winning an election, he puts all his energy and attention into the task. After its achieved is when he usually fails, his attention drifting in search of a new challenge.

He realised this aspect of his character around the time he cheated on his second wife. Charming has come to terms with it, showing no sign of trying to change. He does have the occasional twinge of remorse for his actions, such as when he challenged Bluebeard to try and save Bigby’s life, having realised that Snow loved him.

While happy to face a fair, or necessary, fight, if he sees a situation as hopeless, he has no shame in doing what he can to escape.

“You are a tedious, small man, and in need of more frequent bathing.”

“I always truly love a woman when I’m first chasing her. But I’m only good at the chase. My love quickly faded once I had to settle down to the tough business of actually living with her. I’m just no damned good at the happily ever after part.”

Bluebeard: “Since when does an unrepentant rogue like you suddenly decide to act so nobly ? How do you not choke on such hypocrisy ?”
Prince Charming: “Look at it this way : with someone like me, noble urges occur so seldom that I can hardly afford to ignore the rare few that do come along.”

“The only honourable purpose of war is to destroy your enemy’s ability to make war. Do less and you risk delivering yourself into his hands. Do more and you entertain depravity.”

Bonuses and Limitations:
Charisma (Persuasion) only works on those who haven’t been previously disappointed by him (-1).

Note:
That he can communicate with the Arabian fables in Arabian is certain. That it’s Mesopotamian Arabic is an educated guess.

Drawbacks:
Strange Appearance (when he drops the glamer). 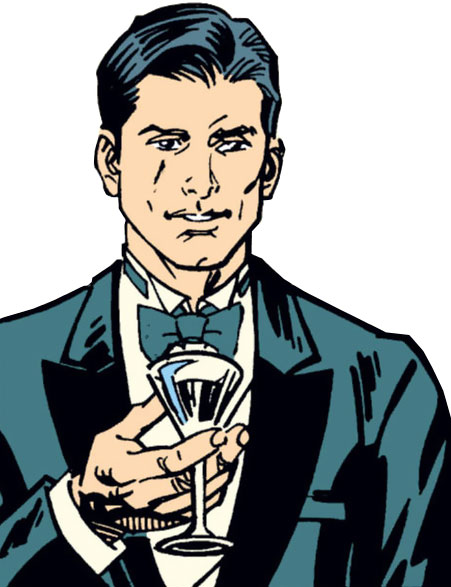 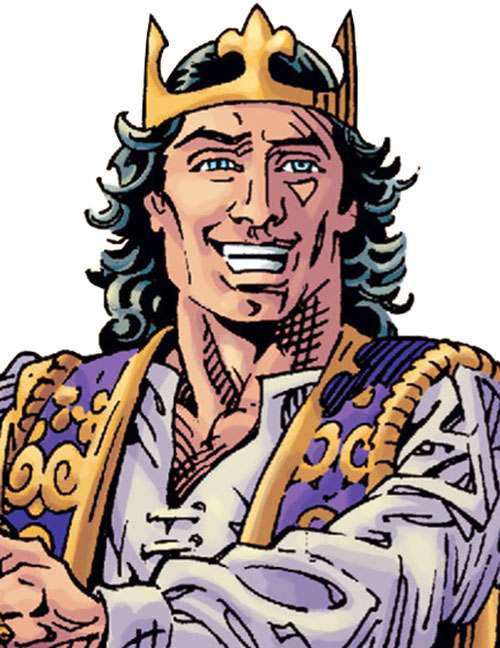 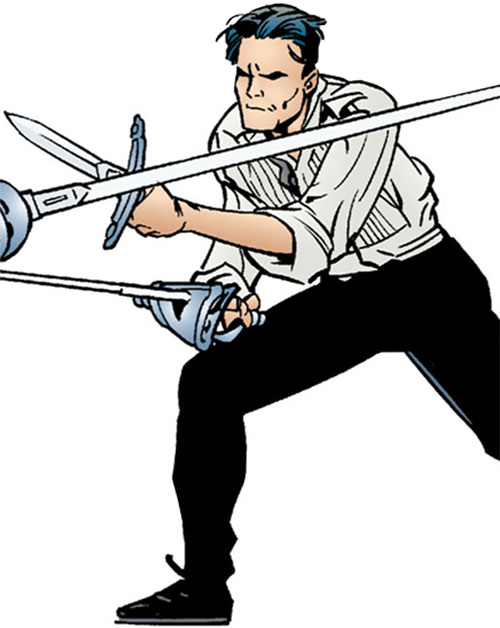 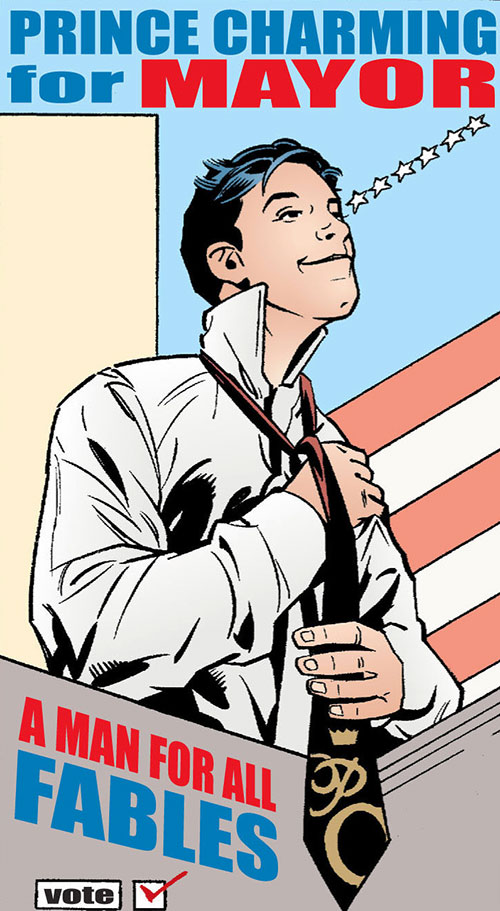 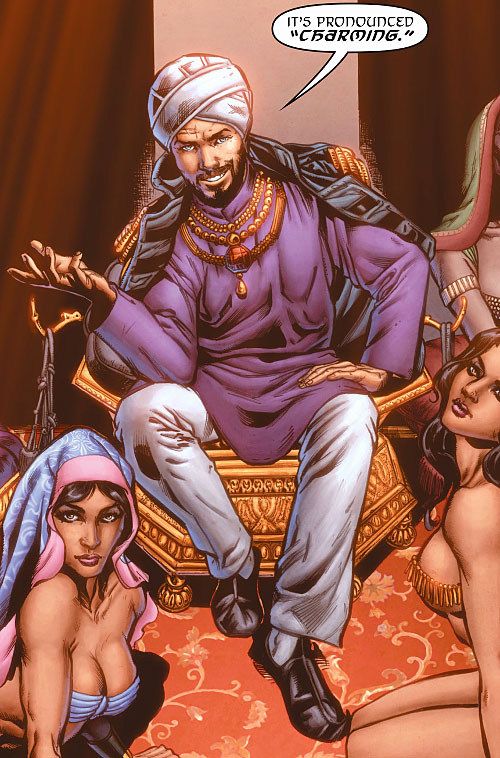 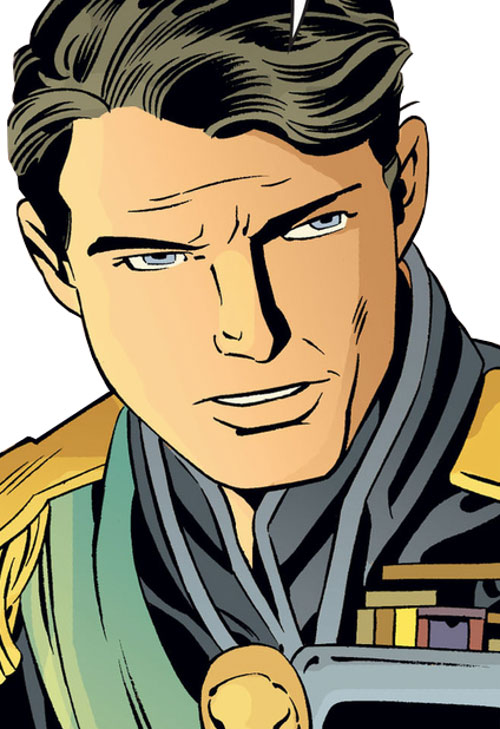 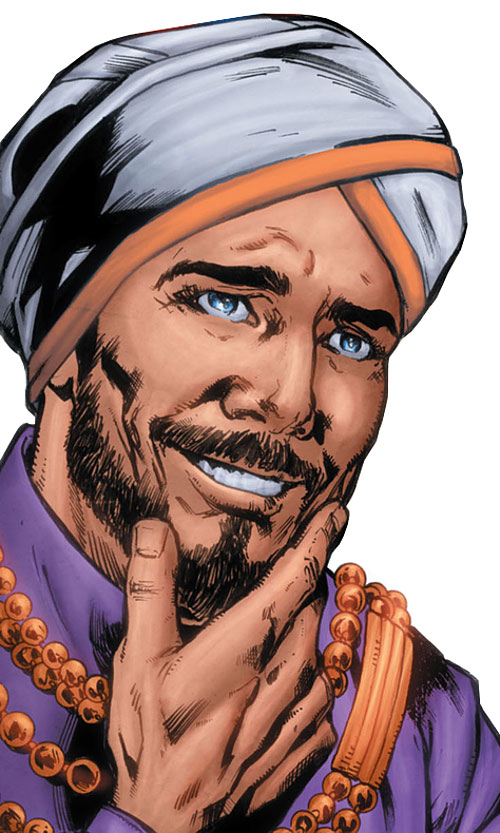