Princess Ariel is a powerful and intelligent sorceress. Her versatility in the use of Thundarr-verse magic is only surpassed by her extensive knowledge of Earth’s past.

Some feats of sorcery she demonstrates are:

Ariel is not a powerhouse mystic like Gemini or Mindok the Mind Menace. But when necessary, she was able to hold her own in battle against wizards of their level. Ariel usually uses her magic to capture her enemies in force cages or rope-like energy rays. 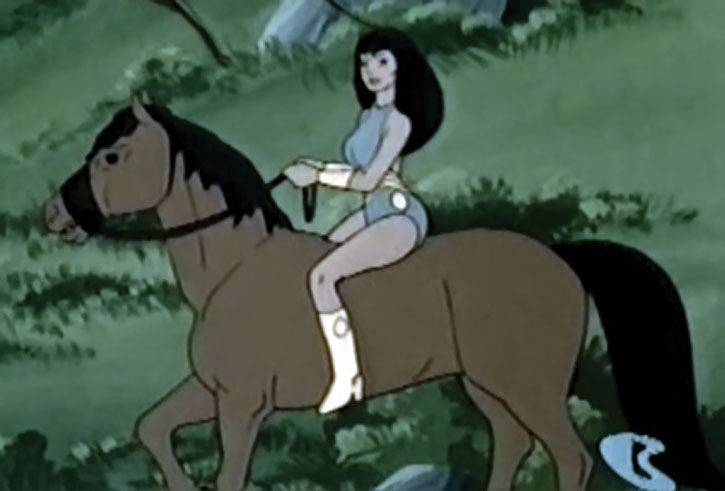 The majority of her Sorcery effects appear light-based, but this is not consistent in everything she does.

Ariel can get her horse to run for many hours or days without stopping and perform jumps (even over men swinging metal pipes over their heads or onto a moving ship). She can also coax her horse to run into perilous situations. Ariel does not have the pet advantage; her horse is a highly trained animal.

It sometimes seems that Ariel’s magic is limitless in its versatility. Yet she has some fall-back applications that she will use over and over. In her DC Heroes RPG game stats, these are the powers listed separate from her Sorcery.

Many times instead of, say teleporting herself and the group out of a bad situation, she will make a bridge or continue to fire her mental blasts orbs. She only flexes her magic muscle when Thundarr isn’t making the decisions.

The visual effects of Ariels magic are completely at her command. For instance, she usually fires glowing orbs of light (in DC Heroes terms, Mental Blast) but sometimes she fires beams of light, even varying them in color but all with the same effect.

Using Force Manipulation Ariel may create a glowing wall in front of her to deflect an incoming energy beam, or it could be a circular glowing shield, or light covering her hands, a triangle shaped solid, or glowing orbs spinning in a circle in front of her. Practically every type of power she uses originates as a ray from her hands even Telekinesis.

Ariel may also combine any number of powers into one conglomerate power. For instance: She can fire forth from her hands a glowing energy rope (combining Flash and Snare) snare an enemy leaping down on her with it and hold him there with telekinesis.

Ariel seems to see her magic as a distance weapon; as something outside herself. She does not use her magic for things like altering her own body, unless to transform it back to normal if needed, or for anything that would directly effect her person.

She doesn’t give herself flight or use it to enhance her strength when entering battle, for instance. But she will erect a force bubble if a building is collapsing on them.

Not much is known of Ariel’s past except she was raised by her grandfather, who taught her sorcery and old Earth History. Ariel mentions once to Thundarr that her ancestors may have lived in a place much like the Chinatown area they visited.

This is the only clue to her past life. It is likely that Ariel and her grandfather could have been held captive along with Thundarr and Ookla.

Ariel rides with Ookla and Thundarr, fighting the oppression of the Wizards.

She is a young woman with jet black hair of Asian descent. Ariel wears a blue one piece with a yellow belt, bracers, and boots.

Ariel is an intelligent young woman, who has a pretty obvious crush on Thundarr, but it’s hard to tell if he’s aware of it.

“Why should Thundarr have all the fun ? Let’s move.”

Ariel: “Thundarr you cant just rush in !”
(Ookla rushes in with a roar behind Thundarr.)
Ariel: “Outvoted again.”

Thundarr: “Hurry, Kordon is as evil as she is beautiful !”
Ariel: “Unlike me, I’m just beautiful, right Thundarr ? Right ?”
(Thundarr rides ahead without answering.)

Ariel (after saving the group with her magic): “Good thing I’ve got magic as well as beauty, aye Thundarr ?”
(Thundarr scowls at her but says nothing.)

“I can’t work my magic as long as my wrists are bound !”

Styra: “Now Ariel, let us decide who shall be the victor. Your magic against mine.”
Ariel (in a mocking tone): “You’ll be sorry.”

Ariel: “Thundarr ! These monsters aren’t alive, they’re not even machines, they’re creatures of pure magic.”
Skelas: “Precisely, witch, Skelas has many means in which to destroy you.”
Ariel: “I resent that, I’m a sorceress not a witch !”

“This is an old Earth Chinatown, my own ancestors may have lived in a place like this.”

Ariel lives in a post-apocalyptic Earth who once traveled to the past (the 20th century) and back again. She has also met scientists from our time. It would not be unreasonable to think it could happen again.

Another thought would be to put Thundarr and friends in Jonah Hex’s futuristic timeline.

Ariel would definitely oppose the Sorcerer Kings of Athas in the D&D Darksun Campaign setting.

Drawbacks:
Minor Irrational Attraction to Thundarr, Loss Vulnerability: If Ariel’s wrists are bound together all Powers drop to 0 APs.

Ariel has some very formidable spells, but isn’t much of a scrapper herself. She makes use of Extra Effort to perform feats such as nullifying spells or expanding her usual spells to affect multiple targets or a larger area.

I thought Ariel would be a nice companion to the Thundarr conversion, but she turned out to be difficult to mechanically convert. Her Air Control doesn’t correspond easily to M&M effects, and her ability to create force constructs or disintegrate objects far outstrips her raw offensive power. 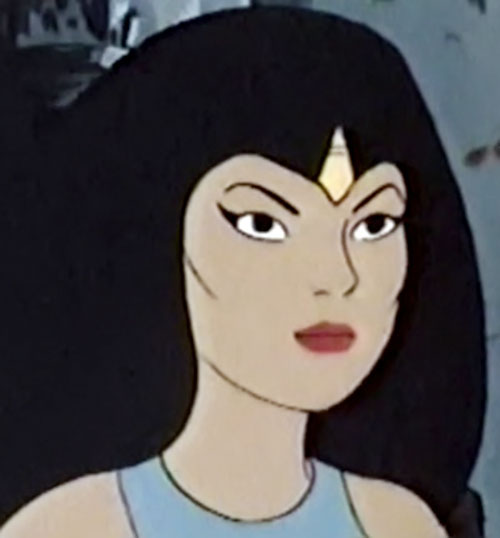 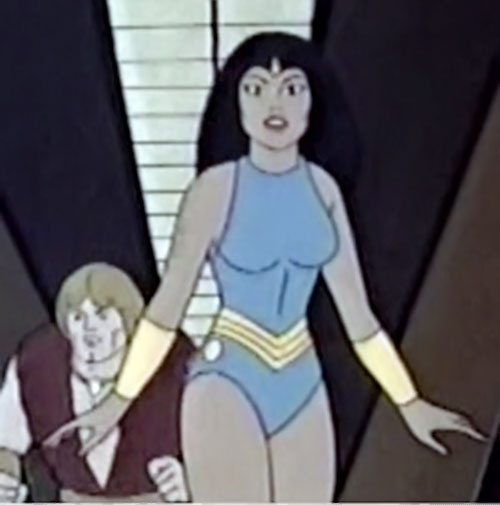 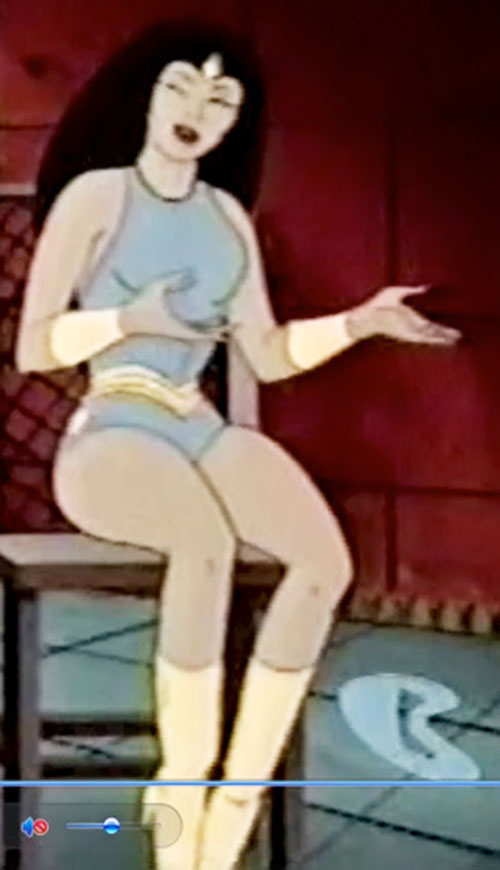 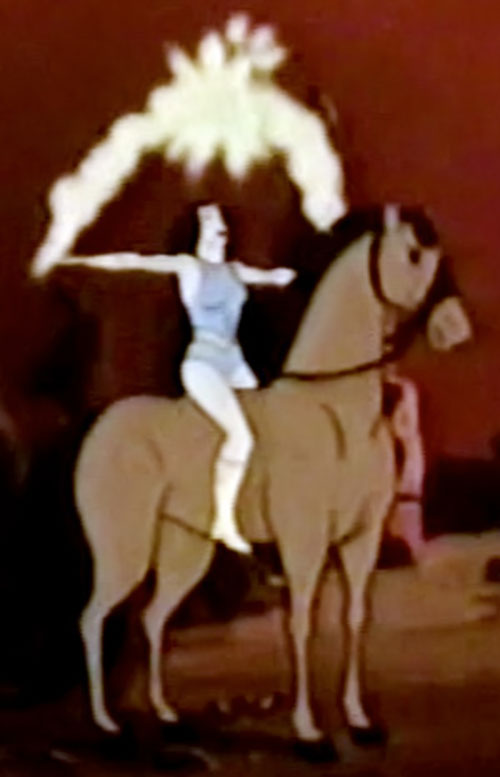