Priss learned all she knows in the streets. She does not have any power beyond her fighting skills and strong determination.

Her tool of trade is her super high tech fighting armor suit, designed by Sylia.

In 2033 the old city of Tōkyō was leveled by tremendous earthquakes, called the Great Kanto Earthquakes. These killed millions of people. From the ashes of the city, the Genom Corporation made a fortune by selling its Boomers. These were artificial beings of great strength that the city bought to rebuild. Eventually, the MegaTōkyō metropolis was born.

But Genom and its Boomers have much more ambitions that merely rebuild the city. The Knight Sabers are the only force capable of standing against them.

Priss lost her parents in the Kanto Earthquake when she was 12. Her childhood was spent in a gloomy orphanage. At 17, she left to join a motorcycle gang and become a small-time singer.

While daring fate on her motorcycle and performing at small-time clubs like Hot Legs and The Night’s City Road, her soul cried for more. The leader of the gang soon captured her restless heart, but it couldn’t last.

Having learned secrets he shouldn’t have, the leader of the pack was murdered. Due to the involvement of “a certain organization” (namely Genom), the AD Police declared his death accidental. Priss carried a grudge against the ADP since then.

Gun in hand, the enraged Priss planned to hunt down the killers… but before she could exact her revenge, a mysterious lady in a red Benz approached Priss and offered her something more. 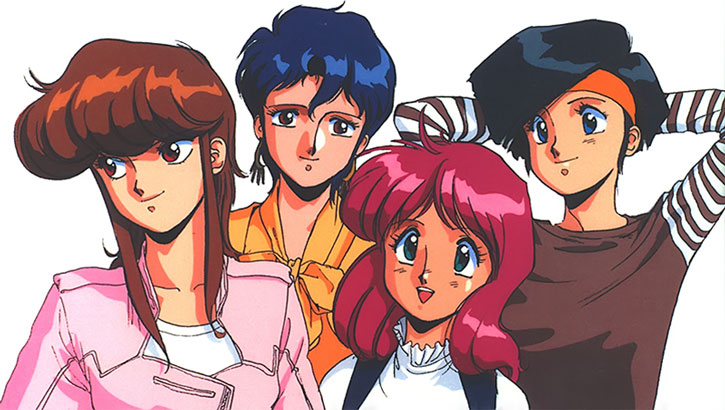 Having entrusted her fiery soul to Sylia, Priss is now a member of the Knight Sabers. She’s their assaults’ specialist. Her regular job is a lead vocalist of a hard-rock band called The Replicants.

She calls an old trailer parked in a junkyard her home, and is currently staving off a potential relationship with Leon Mc Nichols, an AD Police’s detective.

She’s a handsome woman. She wears short leather oufits when performing, and casual clothes when not. As she rides a motorcycle in town, she also usually wears a biker’s jumpsuit.

Priss is a rebel and thrillseeker, with a self-destructive psyche only countered by a strong will. She fluctuates between casual and hostile. She generally does not let people get close to her, as most who do wind up dead.

Among her many quirks are her tremendous appetite, her disdain for housework, and her obsession with motorcycles. She goes through a pair of bikes a year, due probably to the fact that she drives like a maniac. 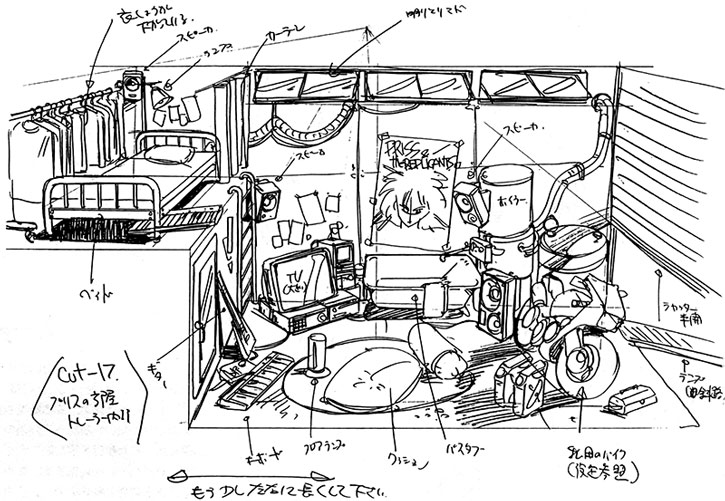 In the videos, the style of her songs is more easy-listening oriented, targeting an early teenage audience. In the Adam Warren comics, she’s a retrotrash hard rock singer. This suits her rebellious personality far better.

In the wake of the heroes and villains of the late 20th and early 21st centuries finally growing old and either retiring or dying, the world seemed to almost settle back down to normal.

However, a man named Quincy (last name unknown) used AI technology stolen from Doctor Katsuhito Stingray, and the ability to absorb foreign material from the now defunct cyborg Metallo. Thus, he created Boomers. These machines soon found their way into every niche in modern life, from service androids and laborers, to military machines and even sex bots.

However, there was a sinister plan – one that would not be known for many years. To keep his plans a secret, he had Dr. Stingray assassinated in 2022. The brilliant scientist had discovered what he was planning. 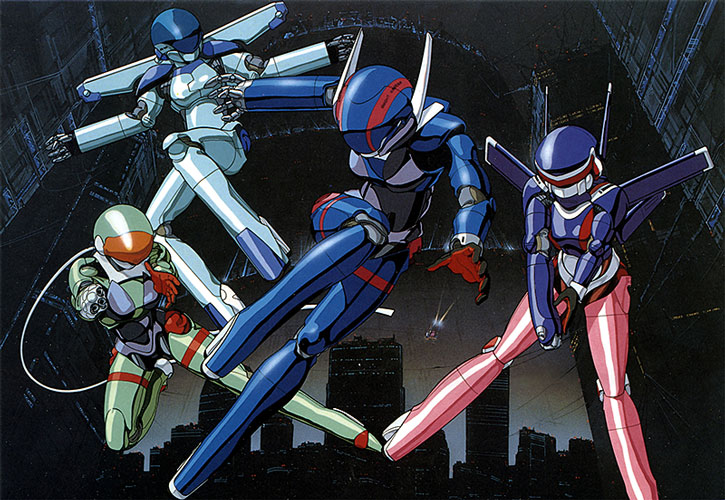 In 2025 the Great Kanto Quake destroyed much of Tōkyō. That gave Quincy the opportunity to begin his own pursuits.  such criminal operations would be considered simply ’rogues’ who had been damaged in the quake. As well, the reconstruction of Megatōkyō would be the perfect opportunity to infiltrate his Boomers even more into society.

However, Quincy did not count on the daughter and son of Dr Stingray, Sylia and Mackie, being nearly as brilliant as the Dr was. With some of the research their father had done, combined with assistance from an old and retired John Henry Irons, they constructed the hardsuits that would be the mainstay of the Knight Sabers.

Knowing that public superheroes would not be as welcome in a time that had finally learned to live without them, they stick to the shadows. At least as much as they can wearing brilliant purple, pink and blue armors…

Notes:
Her original suit, which she wears until it is destroyed in Episode 6 (“Red Eyes”) 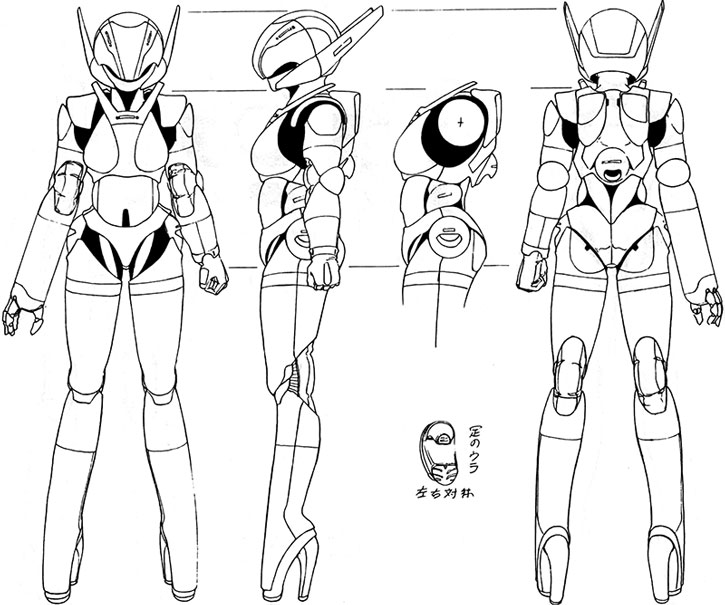 Notes:
Unlike the other Knight Sabers, Priss starts wearing her upgraded suit in Episode 6, “Red Eyes”. It contains considerably more close-combat weaponry, an augmented laser, and is slightly more armed and stronger (though not enough for higher Str, Bod, or Skin Armor).

PLASMA HANDCANNON [BODY 08, EV 09, Energy Blast: 13, No AV – use Weaponry instead]
The primary use for this weapon, a dual beam brightly focused, highly energetic plasma that can blast through a considerable amount of steel.
A modular attachment for the Mk III suit that covers her right forearm.

HYPER-ARMS [/STR/ 12 BODY 09] w/ LASER CANNONS [BODY 04, Laser beam: 15, Limitations: May only fire every other Phase, No AV – use Weaponry instead].
Each arm contains a high powered laser cannon, that fire simultaneously at the same target (“crosslinked”). However, they may only fire once every ten seconds.
A high-powered set of armor and hydraulics for the upper body, with claw like manipulators. Is one of the modular packs for the Mk III suit.

SPIKE SHOOTERS [BODY 08, Projectile Weapons: 11, Sharpness (Projectile weapons): 04, Ammo: 20. Note that Projectile Weapons Power does include AV].
Using plasma as a propellant, they fire 14″ tungsten spikes at an incredible rate, and are basically hyped up versions of the railguns of her old suit.
The default “attachment” for the Mk III suit. Can either rest along the back, like the wings on Sylia and Nene’s suits, or can flip over the shoulder to fire.

By Nicolas Lemaçon and William Chamberlin. 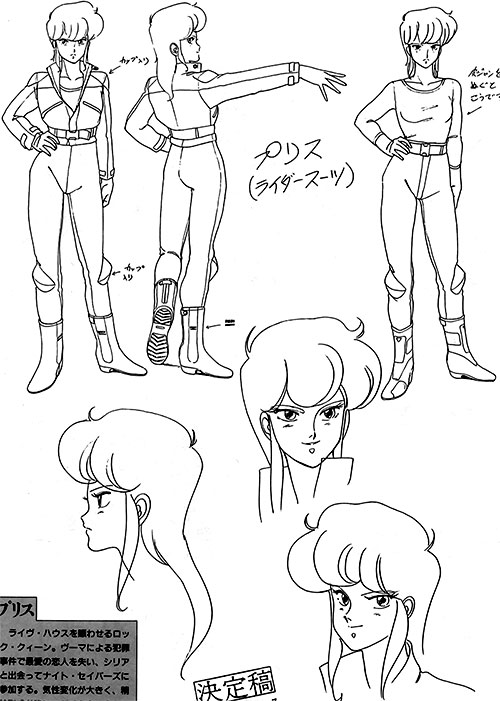 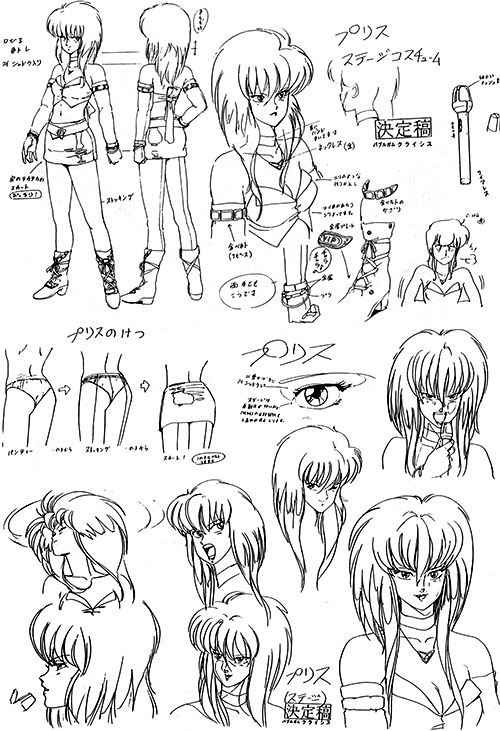 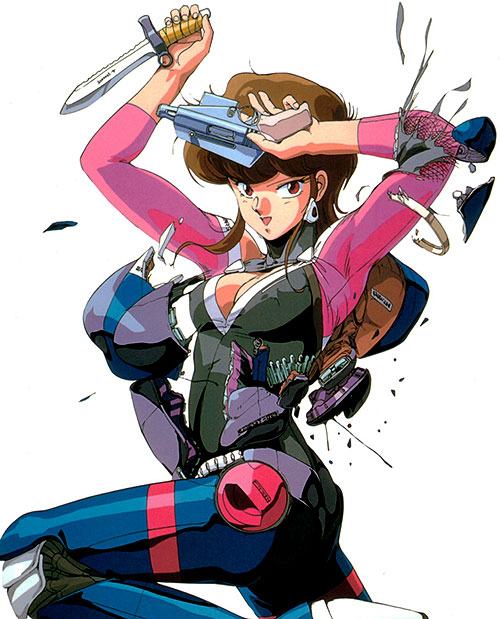 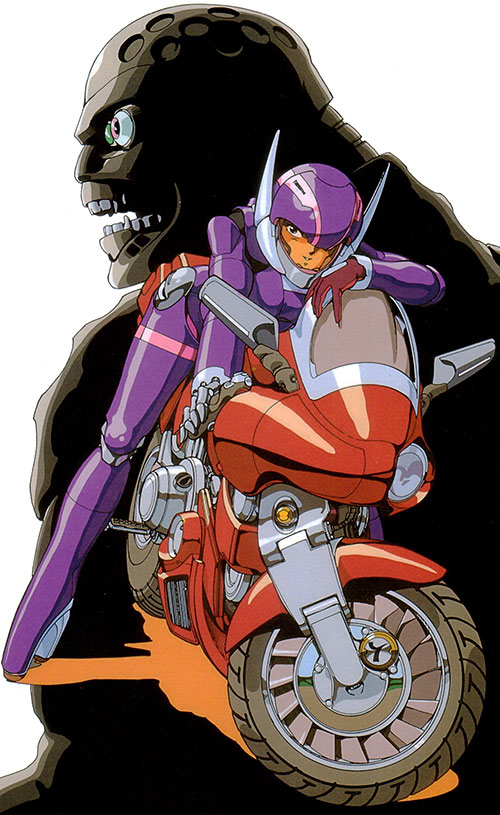 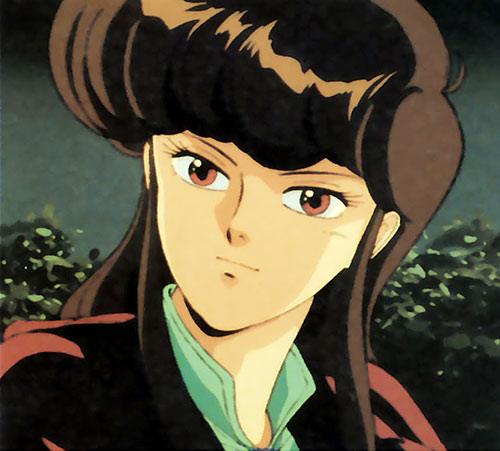 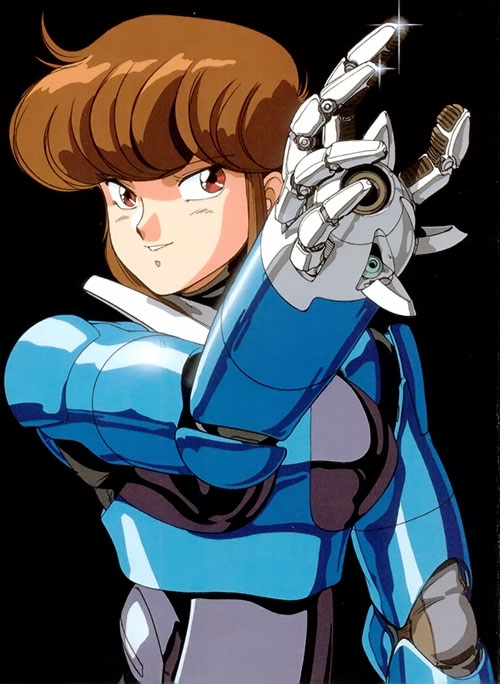