The Professor has designed a range of unusual technologies. Most are based upon magnetism and magnetic force.

His main weapon is the Oculon, a giant levitating eye that serves as his proxy. It can project a variety of beams from its baleful iris.

Ojo’s main gadget is his special helmet, which more than compensates for his blindness.

Although Ojo does not consider himself to be any sort of physical combatant, he can strike telling blows when cornered and excited enough.

Despite his utter blindness, the younger Ojo had tremendous success in school. Thanks to his genius, he eventually received a doctorate from a major university. Devoting himself to research, Ojo created an artificial sight device but kept his findings to himself. He disappeared soon afterwards.

Professor Ojo first appeared as the employer of one Lewis. This traitor stole an experimental US atomic submarine and brought it to Ojo’s base in the North Pole. Ojo hated atomic energy and wanted to wreck anything associated with it. Presumably he intended to personally destroy the sub.

In order to clear the way for his theft, Lewis had cleverly manipulated Richard Dragon and Ben Turner into serving as a diversion. However, he two kung-fu fighters (soon joined by Lady Shiva) did not hesitate to chase Lewis and the stolen sub all the way to the North Pole.

Not only had they been duped into helping the traitor, but the enmity had gotten tragically personal. As part of his deception, Lewis had hired an assassin called the Axeman, who accidentally killed his daughter Jane. Jane Lewis also was Turner’s romantic interest, and Turner and Mr. Lewis blamed each other for this death.

Rumble at the pole

Reaching the North Pole, the kung-fu trio soon located the base of Lewis’s employer. It rapidly became clear that Ojo’s normal Inuit servants didn’t have a chance, and Ojo sent in his “Eskimo bladesmen”. These baroque killers who engaged Turner and Dragon over a surface of super-slippery Ice-10 compound.

However, he ice-skating bladesmen also failed despite the advantage Ice-10 gave them. Thus, Ojo invited the kung-fu fighters in his base.

As the fighting continued indoors, Ben spotted Lewis and furiously pursued him outside. Stumbling into a blizzard, Turner and Dragon lost Lewis. They then found themselves hounded by the Oculon, Ojo’s master robot weapon. This forced them to run to Shiva, who was minding their seacraft, to escape.

That was Ojo’s plan. Using magnetic force, the Oculon captured and destroyed their craft. That flung the trio back to the base, where Ojo inevitably dropped them into a deathtrap.

Ojo announced that he had magnetised the three martial artists. He then had his bladesmen unload drums full of metallic daggers, which flew toward the trio. The three masters gave an impressive demonstration of blocking or dodging a blizzard of flying daggers. But it was inevitable that they would eventually fail.

However Dragon, realizing that a human body could not actually be magnetically charged in this way. Thus, he grasped and threw away the largest metallic object on them – Shiva’s belt. He was correct, and they thus escaped the deathtrap as all daggers flew toward the belt.

The Oculon being nearly depleted, it was as powerless to stop them as were the guards. As a result, the kung-fu trio commandeered the stolen nuclear submarine. However, Turner decided to remain behind to find Lewis. Sensing a fantastic opportunity, Ojo took Turner out with the Oculon’s paralysis beam.

His base having been hopelessly compromised and sure to be soon assaulted by American forces, he then blew it up. This led the authorities to conclude that Turner had died in the explosion.

Neither Ojo nor Turner was dead, of course. Ojo would eventually turn Turner in to the League of the Assassins, who brainwashed him and turned him into the Bronze Tiger. The Tiger presumably served Ojo for a little while before he joined the League full-time.

With stars in our eyes

Months later, from his Arctic retreat, Ojo turned his attention to Star City. He placed a hovering eye over the city.

This caught the interest of several heroes. Green Arrow (Oliver Queen) and Green Lantern (Hal Jordan, who at that point had problems with his ring) did not manage to stop the Oculon. But another Green Lantern, Guy Gardner, destroyed it.

Jordan and Green Arrow clashed anew with Ojo’s eyes-in-the-sky in Gotham. Alas, they could not prevent the villain from recruiting the villainous Crumbler (Alexander Tuttle).

Continuing to investigate, Green Arrow discovered an Ojo base hidden under an optometry shop in Star City. Though the archer defeated the booby traps, Ojo himself and the Crumbler vanquished him. Hal Jordan came in time to rescue his friend. But Ojo and the Crumbler escaped after the Professor created “mega-darkness” in the room.

After Ojo enhanced the Crumbler’s gloves and readied the final phase of his plan, the Crumbler disobeyed orders. He used his new gear to pursue personal vengeance against his father. That was not Ojo’s plan at all. The Crumbler was supposed to attack a nuclear plant, killing millions through fallout to “prove” the dangers of nuclear energy.

Ojo got the plan back on track. The Crumbler did as commanded, destroying containment equipment and releasing a huge cloud of radioactive dust. But Hal Jordan intervened and controlled the cloud before it could harm anybody. Green Arrow then prevented Professor Ojo from fleeing.

Ojo was never seen again after this defeat.

A suave, calm, deceitful mastermind who enjoys setting up games of death and deception. He’s confident and manipulative, setting plans up that rely on pushing the red buttons in his opponents’ psyche. He’s far more confident when facing opponents without super-powers, though.

Ojo constantly refers to himself in the third person, often to proclaim that he is pleased. Although it might be an affectation, he does sound like a megalomaniac and might be psychotic. Or possessed by some entity called Ojo. Or worshipping something called Ojo, whom he thought was observing him 24/7. Or referring to the hallucinatory ghost of his father. It’s hard to tell.

If he loses his confidence, his grammar will become inexplicably halting. Also, the closer he gets to the possibility of triggering some terrible nuclear accident to “show the fools their folly”, the more excited, unsubtle and ranting he becomes.

“The submarine is proceeding according to schedule, with a few forgivable mishaps. Ojo is pleased.”

“Ordinary folks are no match for them ! Therefore… dispatch the Eskimo bladesmen !”

(Excitedly) “Yes ! I was born without eyes ! My father was scientist in early atomic experiments ! Exposure to radiation caused this deformity in me ! Also I am scientist – genius !”

““We demonstrate their folly ! We are avenging angels… we turn their filth against them ! We slaughter millions !” 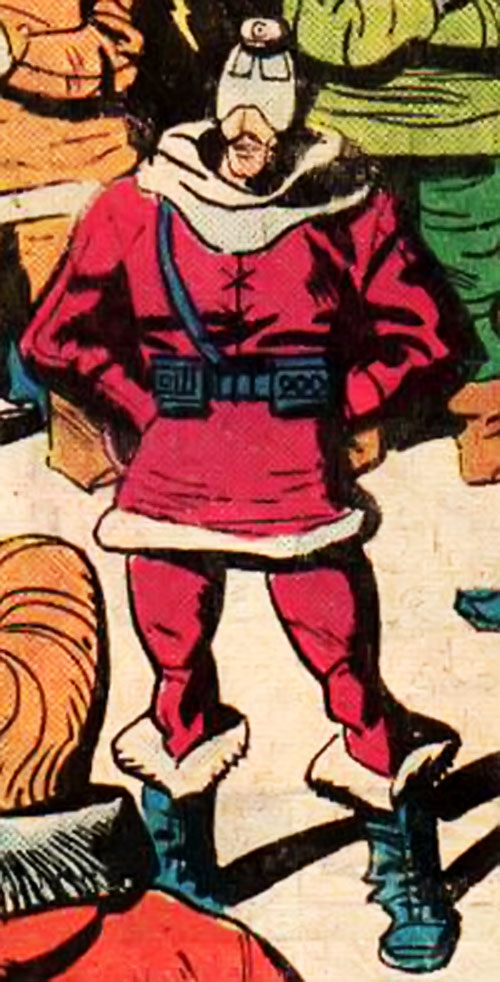 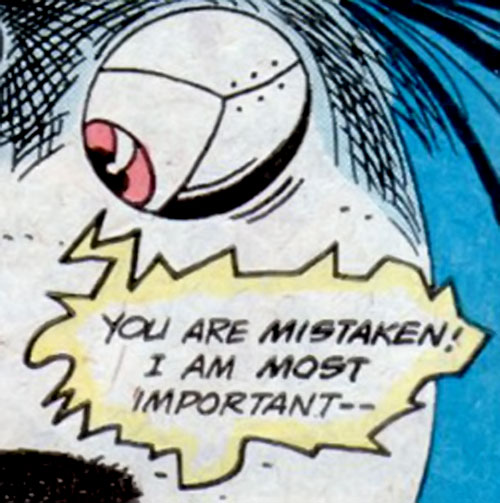 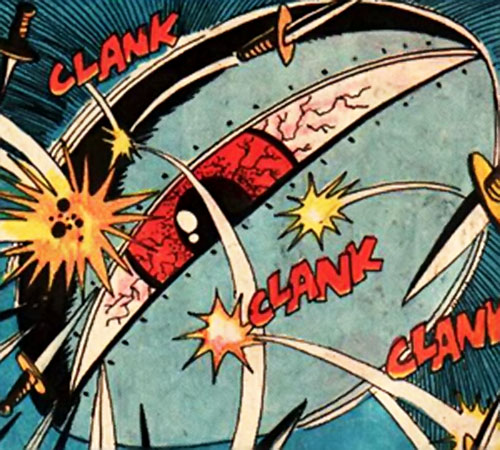