This is the Prometheus who appeared in Blue Beetle in 1986 (soon after the Crisis) and promptly joined the Hybrid.

Yes, it’s reasonable to consider him a Colossus expy .

Since Pteradon is reportedly the sole survivor of the Hybrid, his character profile is the one with all the background data. So you probably should read it first.

Prometheus is covered in promethium. That grants him greatly enhanced strength and durability.

He can mentally augment his skin temperature to enormous levels at will. If he cannot keep his metallic skin hot enough, though, he may become unable to move.

Before his transformation, Curt Calhoun was an employee of Kord Industries. This is the company run by the Blue Beetle (Ted Kord) in his civilian identity. The Texan was the foreman of the metallurgy lab, and according to Kord was highly competent at applied metallurgy – and reputed for that.

In 1986, Calhoun and a friend and employee of Kord, Murray Takamoto, were working on a contracted-out job from Dayton industries.

The research in question was an unspecified bonding operation involving Promethium. This process had so far stymied the scientists at Dayton and STAR. It is likely, ironically enough, that Dayton had this bonding process researched to advance his Hybrid operations.

The metallurgy lab was attacked by Doctor Alchemy. But he was defeated by the Blue Beetle after stealing just a small bit of the mysterious metal, leaving enough for Takamoto and Calhoun to continue their experiments.

Those never panned out. During the big final attempt, the cauldron ruptured and Calhoun sacrificed himself to save Kord from the molten metal.

It is possible than what saved Calhoun was that he was successful in beating the difficulties involved by the bonding process. In any case, *something* allowed the promethium to bond to his body rather than just crush and burn him to death.

Calhoun has a *thick* Texas accent, and stereotypical Texas mannerisms and diction. That makes it hard to imagine that a man with his physique didn’t play football in college :-). He insisted on calling Ted Kord “sir” (more specifically “Mister Kord sir”).

Calhoun was unusually unassuming about his expertise and deeds. He generally came across as a good, high-spirited, simple guy – and seemed very loyal and dedicated.

“But ah never asked t‘be changed —! Ah’ve got friends — a life back in Chicago !”

“Lady, ah shore don’t wanna hurt you none, but I gotta.”

Bonuses and Limitations:
Flame Being can be Combined with Wrestling (but not Grappling). 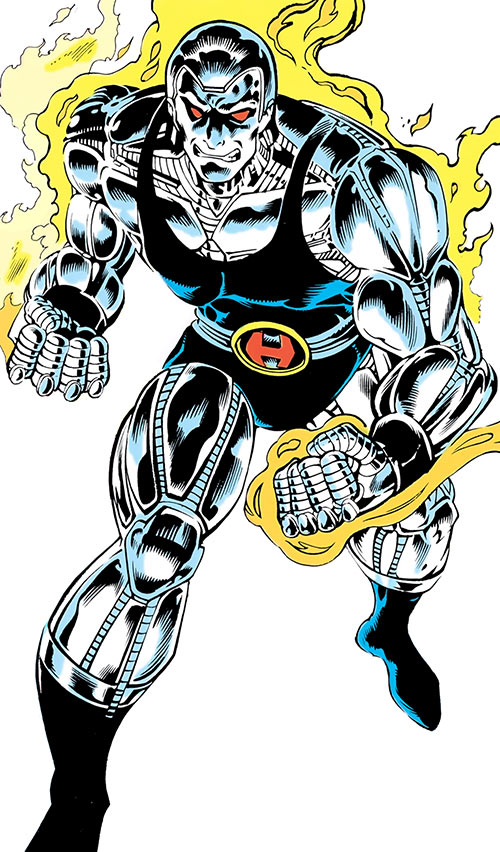 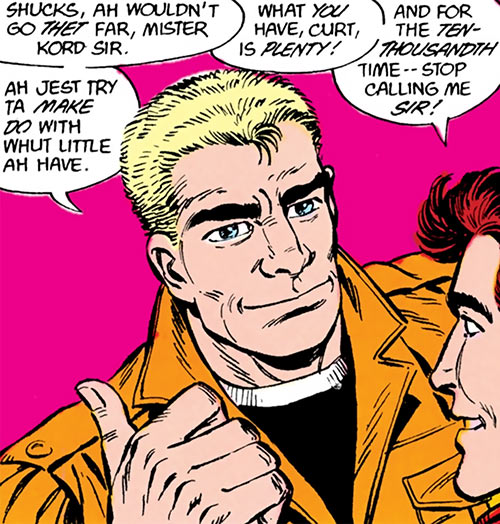 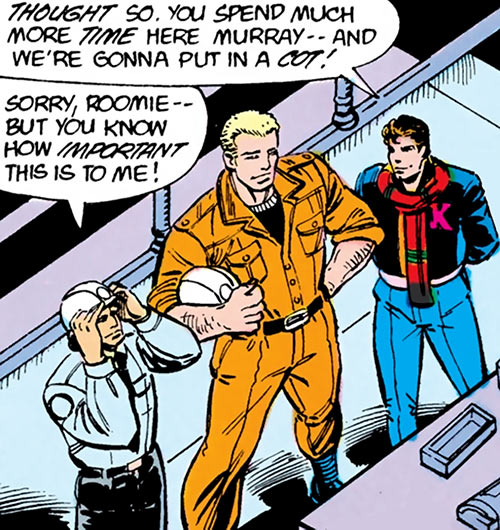