An alternate universe Kree, Noh-Varr has been genetically enhanced with insect DNA. This made him incredibly fast and strong, and significantly more durable than an average human or (616) Kree. He can achieve high running speeds of at least 86 MPH, and can run on walls and ceilings.

He has nanotechnology in his body, and can excrete it in a number of ways. His spittle can cause programmed hallucinations in anyone who comes into direct physical contact with it. He can also rapidly grow and detach his nails as small grenades.

His digestive system is more adaptive than that of a human, and he can survive on a diet of cardboard and garbage. He is also triple-jointed, and can transform pain he feels into music in his head. He seems to be able to detect thoughts, although he can’t read minds, and is able to track down Skrulls by scent.

His training allows him to enter a state called White Running, where his body intelligence takes control, allowing him to operate at peak efficiency without extraneous distraction.

A skilled pilot, he’s also trained in armed and unarmed combat, and was a specialist in Kree firearms. His knowledge of advanced Kree technology allows him to tinker together technology well beyond current Earth levels, especially in the field of trans-dimensional  physics.

As Protector he wears a pair of Nega-Bands designed specifically for him. The full extent of their capabilities is not yet known, but they allow him to:

He can also use the technology in them to quickly build Gadgets (whose size seems notably larger than the volume of the Bands), often guns (including one capable of slowing an Asgardian Hammer-empowered Hulk). He’s also used the bands technology to take over a few dozen empty Iron Man armours.

His costume is generated, at will, by the Bands.

(His early history is covered by the Marvel Boy (Noh-Varr) entry).

During his incarceration at the Cube he was mentally visited by the members of the Illuminati. They spoke with him individually, trying to convince him (in their own ways, Namor’s being to keep hitting him) to give up his declared war on Earth.

He learned of the original Captain Mar-Vell from them, and considered their words as he waited for his freedom. 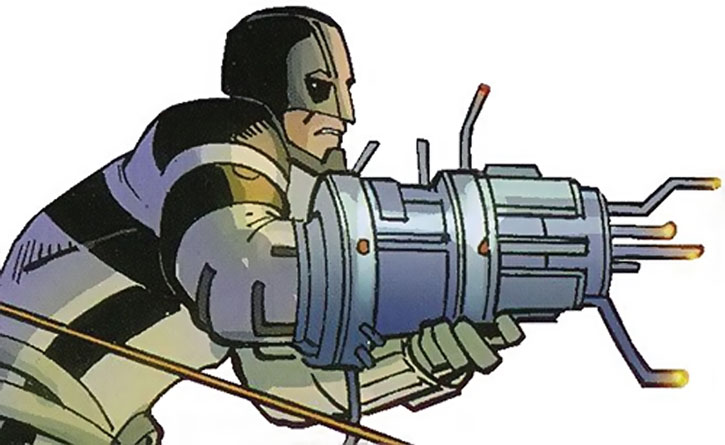 Finally leaving the Cube during the Skrull secret invasion, he encountered the returned Captain Mar-Vell. This Mar-Vell turned out to be a Skrull who’d been convinced he was the real Mar-Vell, and died in Noh-Varr’s arms after having tried to stop his people.

Noh-Varr joined Earth’s heroes in driving the Skrull’s away.

Following the invasion, he was recruited into Osborn’s Avengers, believing them to be who they pretended to be to the public. He became Captain Marvel, to honour those who’d come before him.

His taking the name Captain Marvel caused consternation among members of the Church of Hala, even precipitating a mass suicide of members in Charleston. Investigating out of costume, Noh-Varr clashed with the fugitive Ms. Marvel, Carol Danvers, who blamed him for the deaths.

He subdued her enraged attack, and revealed the Captain Marvel who founded the church was a Skrull. They parted on uncertain terms.

On the run again

Noh-Varr was seduced by the new Ms. Marvel (Karla Sofen). It was from an offhand comment by her he learnt that Osborn’s Avengers were mainly super-criminals. Whether that was intentional on her part is uncertain, but not impossible. Shocked by the revelation, Noh-Varr fled. 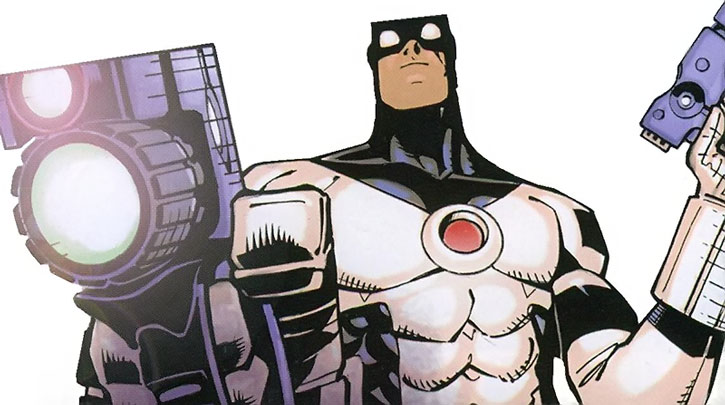 On the run, he kept a low profile while scavenging the technology to build transmitters to contact the Kree Empire for advice on what to do next. Since the energies of the transmitters could be detected by Osborn’s people, he had to abandon them after using the devices.

Despite the need to maintain a low profile, he couldn’t help interceding when people were in trouble. He met student Annie in this way. He was detected soon after, and confronted by the Sentry. He resisted, and Annie helped him escape.

He also worked against Osborn’s interests where he could, such as helping Wolverine undo one of the operations Osborn had sent him on.

Finally receiving a response from the Supreme Intelligence (probably the one from his home dimension). He was appointed Ruhi-Tugu, or protector, of Earth, charged with helping it reach its potential. He was given a set of Nega-Bands, more advanced than those worn by Mar-Vell, and adopted a new identity, calling himself Protector.

Travelling with Annie, Noh-Varr was attacked by an unidentified female in hi-tech armour. After a battle to test him, she realized he was younger than when she’d intended to confront him, and not yet skilled enough.

Unmasking her, he came face-to-face with an older Annie, who promised it would make sense to him someday. She departed, and he kept her identity from her younger self.

When the proper Avengers reassembled, they encountered trouble with Kang, and Tony Stark recruited Noh-Varr’s help for his familiarity with trans-dimensional technology. He helped them whip up a portal to see into the future, and then a device to take a team of them there. 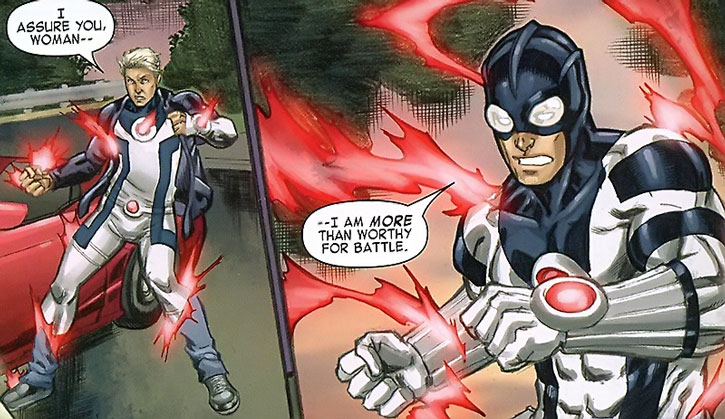 While half the team stayed behind to deal with the time anomalies, Noh-Varr accompanied Iron Man, Wolverine and Captain America (Barnes) to the future. They met Stark’s older self, and learned that time has been broken by Kang’s war with Ultron.

Thrown back to their own recent pasts by the anomalies, they rebuilt the time travel device, then travelled to just before Kang attacked Ultron. They convinced Ultron to let Kang destroy him in order to avoid time being shattered. Calculating the odds of them trying to deceive him, Ultron allowed himself to be destroyed.

Returning to their own time, Protector joined the Avengers. He has since helped battle the Asgardian-empowered Hulk’s rampage in Brazil, and defended New York from Sin’s blitzkrieg. To do so he hacked into the old Iron Man armours stored in the fallen Avengers Tower to use them in the defence, then hacked into and disabled the battle armours Sin’s forces were using.

Calmer since recovering from the trauma of his arrival, Noh-Varr is now level-headed and devoted to the well-being of the planet Earth. His approach may not immediately make sense to humans, but he does follow his own alien (insect-like) logic. 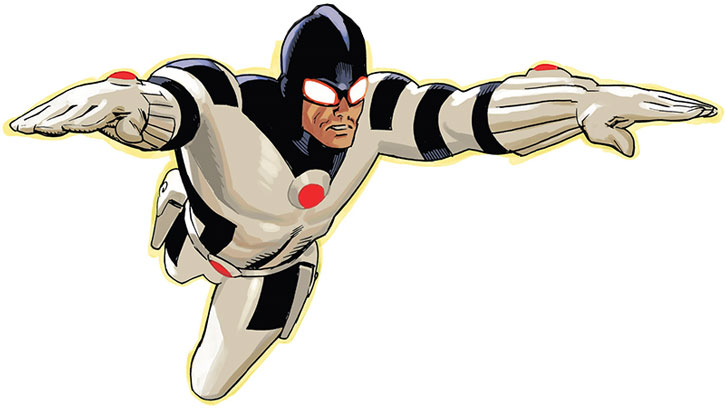 Fairly stiff, he does make the occasional attempt to be lighter, although elements of Earth culture still confuse him. His interactions with his team mates have a fair amount of confusion on both sides.

While he sees it as his duty to nurture humanity, he’s reluctant to share Kree technology with them. He sees them as being to immature to safely handle it, although if the situation warrants he’s perfectly willing to build Kree tech to fulfil his duty of protecting them. 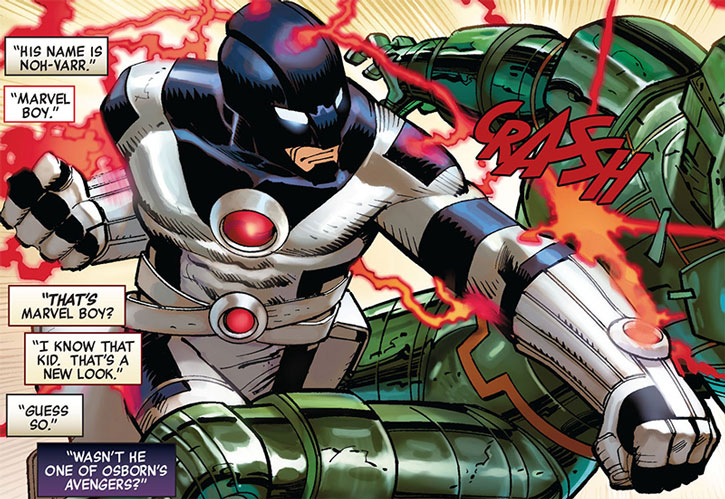 Protector: “What are you saying, Spider-Man ?”
Spider-Man: “Don’t worry about it, Noh-Varr.”
Protector: “I want to know. You often use words whose meaning I comprehend, but when you use them, they make little to no sense in context to one another…”
Spider-Man: “Okay, but…”
Protector: “And I know you are doing it in a humorous fashion, but—”
Spider-Man: “Um—”
Protector: “My inability to understand the reference point in which you are using sarcasm to make an observation about the world around you is very frustrating to me.”
Spider-Man: “Well… That was funnier than what I said anyhow.”

Noh-Varr can enter a state called White Running, wherein he limits his awareness of sensory input, allowing his body intelligence to take control. He’s still aware of his surroundings, and any threats, but it lets him avoid unnecessary distractions and focus his energies. This allows him to activate his Power Reserve, which may be applied to any Stat or Power, or his Shade power.

When making Multi-Attacks while White Running, his focus and speed compensate partly for splitting his attack, allowing him to ignore 1CS of the RV increase (but not the OV).

White Running requires his complete focus, so it can be difficult to maintain if he sustains an injury. If at less than full BODY, he must make a roll with his current BODY as the AV\EV and his regular BODY as the OV\RV. If he fails the roll he slips out of the White Running.

His earlier stats can be found in the Marvel Boy (Noh-Varr) entry. Some things are different, but I haven’t made any attempt to change the old WU based on the new evidence, leaving it as a snapshot of how he appeared.

He’s shown the ability to cobble together Gadgets on short notice, even when he might not have sufficient raw materials available. As they’re often connected to his Bands, I’ve modelled this as the Fabricate Power for the Bands, which still requires him to design what it is he’s assembling).

Source of Character: Marvel Comics (covers up to Avengers #16). 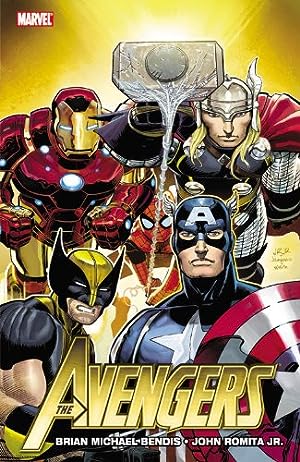 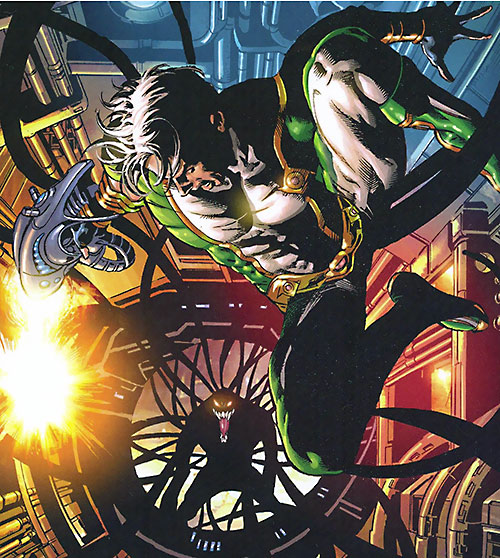