Proteus is one of the Marvel Universe’s most powerful mutants. His primary abilities are to warp reality according to his will, and possession of others by psychic vampirism.

His reality-shaping powers allow him to reshape physical matter, including people, into anything he wants. He has been seen to affect objects as large as skyscrapers. Also, if he wills it so, it is impossible to use most types of physical powers or any type of teleportational capabilities in his vicinity.

Few men can resist Proteus taking total possession of their bodies. While in possession, he has access to all their abilities and their memories.

He is also a very powerful mentalist and can read the minds of people around him, often making their greatest fears a reality. He can twists perceptions and drive normal people insane. He is also capable of turning of his psychic emanations, making it very hard to control or track him by psychic means, such as a Cerebro.

Proteus reacts with the speed of though, and is a very hard opponent to face on equal terms. He has often defeated an entire group of heroes before they have got a chance to react.

Seemingly even to Proteus’s surprise, he is powerful enough to eventually pull his molecules together even after total defeat. Likewise, he can just choose to disperse himself to the winds, ceasing his existence.

Proteus has some vulnerabilities that can be used against him. All metal is poisonous to him, and can quite readily destroy him or bind him. Also, his powers usually burn up whatever host he is in possession of so he constantly needs to find new hosts.

Proteus is the son of Moira MacTaggert. From an early age, he developed dangerous mutant abilities and a hatred for all life, so his mother imprisoned him in a special cell in her research facility on Muir Island. She worked unsuccessfully to find a way to reverse his mutations.

Eventually, Proteus escaped imprisonment when his cell was damaged during a battle between the X-Men and Magneto. He made his way off the island to Scotland, where he left a trail of drained bodies behind him. He finally possessed the body of his own father, and in this form he faced the X-Men.

Colossus finally defeated him by first shattering his decaying human form, then by driving his metal fists through Proteus’s energy form.

That is not dead which can eternal lie

For years, Proteus was believed to have been killed. Instead, his energy form somehow was scattered to the winds. The scientists of Advanced Idea Mechanics (A.I.M.) revived Proteus, who returned to terrorize Scotland and Muir Island. Then he dispersed himself once again, this time of his own volition.

Proteus again returned in the House of M reality, where he had never been destroyed. He came into contact with the inter-dimensional group of mutant heroes knows as the Exiles, and from them learned of the existence of the multiverse. Using his powers, he downloaded a lot of info about alternate universes from their databases.

He proceeded to warp himself between other realities to find a suitable host for himself, just as the House of M reality collapsed and reverted to Earth-616  reality. The Exiles hunted Proteus through a number of alternate realities, including the New Universe and Marvel 2099 ones.

Proteus in his true form is a white, formless wraith. As he is always in possession of somebody he can look just like anybody. However, the eyes of the possessed victim are completely white.

Proteus moves like a megalomaniac and talks with a heavy Scottish accent, even when in possession.

Proteus became self-aware in the womb of his mother, geneticist Moira MacTaggert. Moira hated her child’s father, and Proteus’s great psychic powers fed off this hatred even as he was developing inside her. This emotion bent his mind and turned him into a psychotic killer.

He is homidical, egomaniacal, and intent on ruling the world – if he doesn’t destroy it first.

Hate still rules his life: he holds no regard for human or mutant life, and will use anybody in his way to further his insane goals. He takes possession of a body, knowing full well that it will kill the victim, and then proceeds to use the body, its abilities and its memories, until the victim is used up.

He feels no remorse for his actions. It is simply a matter of survival, the strong preying on the weak. He refers to a possessed body as a shell, to be used at his leisure. His first goal is always survival, at any cost.

Since metal is poisonous to him, he tends to escape whenever attacked by metal-based attacks or characters, and he tries to avoid possesses them.

Due to the nature of his great psychic powers, he burns up whatever body he possesses at a incredibly fast rate. His main motif is usually thus to find a body capable of containing him and his powers without burning up. The Hulk is known to be one such being, and would provide him with a permanent, healthy body.

After having fulfilled this goal, he would proceed to destroy mankind. He calls himself Proteus, after the shape-changing God of Greek myth, since he had godlike power.

“He and I are much alike, you know. What we want, we take. And what we take, we never give up.”

“They are human, Moira. They must be taught who is their master.”

“Fool, you should have finished me with your first shot ! I guarantee you won’t live to try a second one !”

(Proteus taking possession of the anti-hero Justice): “Not quite the change of clothes I had in mind, but it’ll do in a pinch. An’ then there’s the fake memories this guy carried around ! Thought he was a so-called ’Justice Warrior,‘ but that was just some blether he’d been brainwashed tae think. Real name’s John Tensen, a cop, so he was… though one with a few non-regulation abilities.” (Kzzakk!)

Sure, just insert him as he is. He would make a good foe of the full Justice Leage of America roster.

Proteus has many powerful mutant powers; one of the most outstanding ones is taking possession of others bodies (Personality Transfer). Whenever taking control of someone, his soul/essence enters the victim, effectively eradicating the victim’s mind.

In this state he is in complete control of the body and its abilities (Powers, and supposedly Skills). The body will have the Physical stats of Proteus or the victim, whichever are the highest. He also has access to all the memories of the possessed victim (Mind Probe). It is said that he grows more powerful by each body he possesses.

He cannot possess any metal-based character, or character containing lots of metal.

As a negative side-effect of his parasitic nature and great power, whatever body Proteus is in possession of is consumed at a fast rate. A good approximation, in game terms, is the infliction of 1 Killing RAP of BODY Damage per 10 APs of Time.

However, this rate is variable and depending on which individual he is in possession of, but victims with a healing factor (Regeneration) or great endurance (Invulnerability) tend to last longer.

Normal humans will last for a couple of hours at most, while a durable character, such as Wolverine, could possibly last indefinitely. The GM is expected to, on occasion, surprise the Players by making some victims last much longer than expected; with such cases he sets a non-default time limit on how long each body will last from first possession and then inflict BODY RAPs of Killing Combat onto Proteus according to schedule (LDD does not apply).

Metal is poisonous to Proteus (Lethal Vulnerability), and he cannot possess metal-based characters since that would bring about his own doom.

In game terms, Proteus attacks any resisting target with Vampirism, as he again does upon leaving a possessed body, usually resulting in death. The currently possessed body also has completely white eyes, which, together with his heavy Scottish accent, is a sure tell-sign that Proteus is in control.

When his current BODY Condition is reduced to 0 APs, Proteus has to take possession of a new body. If his BODY is destroyed by an attacking force, he can immediately possess another body in the area.

Without a body Proteus is a ghostly wraith (Self Link: Spirit Travel). While in wraith-form he has to take possession of a new body very soon or temporarily perish. Temporarily only since he has been shown to return long after his wraith-form has been destroyed.

While in this spirit-like state he cannot be physically attacked, except by metal-based attacks, that are extremely poisonous to him and can readily destroy him, at least temporarily.

In times past, before discovering all his powers, Proteus was dangerous, but not quite the threat he currently is. The classic Proteus character, before his “death” at the hands of Colossus, did not have the Dimension Travel and Radio Communications Powers.

He did not possess any type of serial immortality, and thus did not have the Invulnerability Power in any way either.

He had no Advantages, no Bonus, his Mystical Stats were one column shift lower and his HP total was 35 only. He also had the following extra Limitations: Mind Probe is only usable on a subject possessed by Personality Transference (-1) and Whenever possessing a victim, Proteus suffers a +1 CS RV Penalty on all Physical Actions using DEX and STR, due to his unfamiliarity with the body he is possessing (-1).

The classic Proteus was not quite as over-the-top powerful as the current incarnation; he was untrained in the use of his powers, and usually didn’t use more than one of them at any given time. It might be advisable to decrease all his remaining Powers by one or two column shifts to represent his inexperience and his somewhat lower power levels. 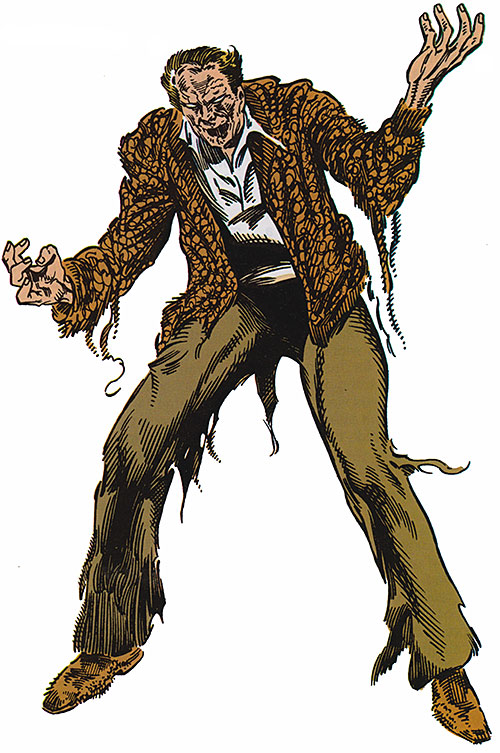 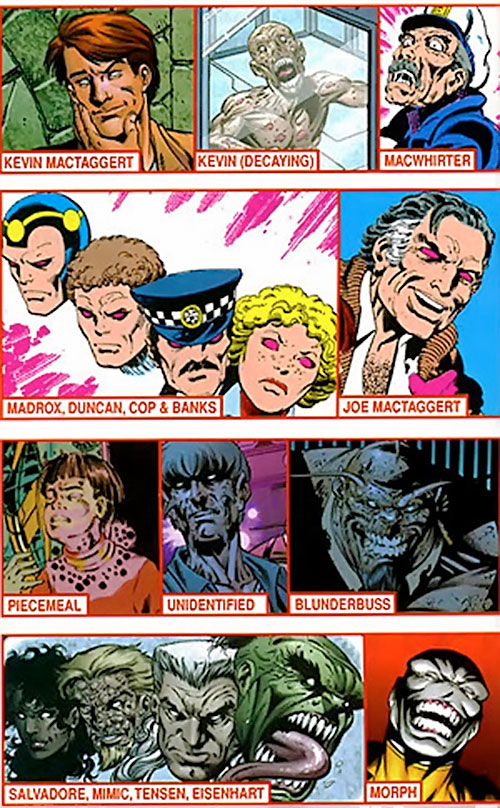 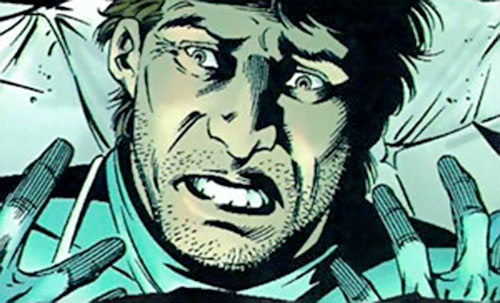 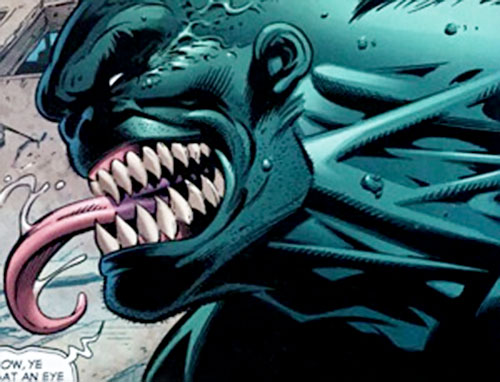 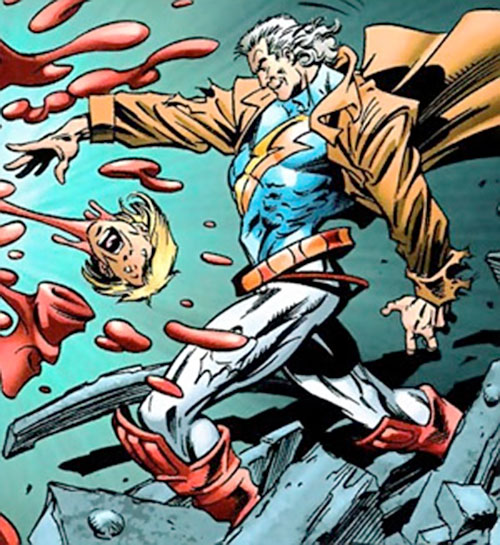