This particular character was created when my brother was very young. We were both big Teen Titans and Uncanny X-Men fans in the early ’80’s.

Proton is a member of the Challengers.

Proton was originally analogous to the Atom, Ray Palmer. He’s a scientist who created shrinking vapors that gave him incredible shrinking powers.

His research resulted in a scientific breakthrough giving Proton the power of diminution. He can shrink himself down to the size of a single cell.

Proton is a judo and iaido practitioner.

He maintains a regimented work out and scientific study routine.

College courses and diligent self-learning has allowed him to excel in the sciences as well as the medical field. 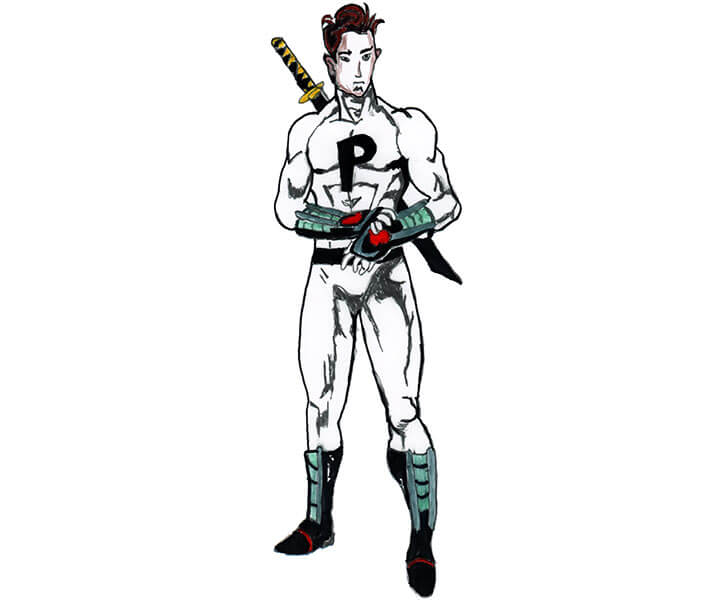 William Donaldson always got good marks in school. This and his social awkwardness made him an outcast. Counselors said his shyness was the result of the loss of his parents at an early age.

Things began to look up for William when he started dating and then married Sharon Boston.

William found himself studying hard in college classes. Working and working out. With little time for his new bride. His regimented, and boring to her, lifestyle left Sharon unfulfilled.

William soon found himself divorced. Still quite young, William interned at some top labs moving where the job took him.

That lasted until he had a eureka moment inventing his shrinking vapors. Suddenly, he had a place he could retreat to anytime he wanted. He could shrink down and disappear from his life.

William began building many things at his tiny size. With time and innovation, he created tools to investigate his new world.

In the meantime, the Challengers, a team of real super-heroes had burst on the scene.

Intrigued, William went to the town of Siouxburg. His activity, trying to find out about the Challengers, was noticed by the Challenger, Violet. Soon, Blitzkrieg met Proton on his own.

Proton joined the Challengers, met the team, even worked alongside them. But it was brief. Proton will always retreat to the safety of his miniature world or his hidden HQ at the end of the day.

Proton… My version of the Atom I suppose.

A simple all white outfit with a black letter P on the chest. Black gloves, black boots. A belt. No mask.

A shy, self-conscious, and quiet guy that only wants to do his job. He is assiduous and very loyal to those who can earn his friendship.

He’s the guy who showed up for judo class, stood to himself until class began, participated in class, then left immediately after. When he gained rank, he was required to teach as well. Being forced into roles like these caused him to be more self-confident in these areas.

The rest of the Challengers don’t know about Proton’s lab. Or his submersible, the Nucleus.

(This section proposes ways of using this character in DC or Marvel Universe stories).

Proton could be a working associate of the Atom or Ant-Man. They recognize his genius. Perhaps he was involved in the breakthrough of their own shrinking powers.

Proton is a loner and would have broken away to do his own research. That’s why he never able to grow or shrink beyond one size.

All the following equipment was built by Proton while shrank. So, they all have Miniaturization 25.