The Transformers is an American media franchise based on a series of rebranded Japanese toys (“Microman and Diaclone”). The series is produced by the American toy company, Hasbro, and centers around two warring factions of alien robot warriors marooned on the planet Earth.

In its decades long existence, the franchise has had many adaptions in comic books, television shows, video games and movies.

Our write-ups specifically cover the first twelve issues of the “Generation 1” comics series, which was produced by Marvel Comics between the years 1984 and 1993. In this version, the Transformers found themselves trapped on the Earth in the Marvel Universe. The series had brief cameos from Spider-Man, G.I. Joe and even visited the Savage Land.

Prowl is the Autobot’s second-in-command. His fantastic visual design makes him stand out amongst his peers, though his personality makes him one of the more boring characters in the series.

Prowl’s robotic body grants him superhuman strength (“Class 10”) and durability. It also renders him immune to all forms of human frailties (i.e. aging, sickness, disease, hunger, fatigue, etc.). His artificial nature allows him to survive virtually any injury. Even if he was smashed to pieces, Prowl could be revived upon receiving repairs.

Like all other Transformers, Prowl can reconfigure his body into a secondary form for the purpose of disguise. Prowls’s alternate form is that of a Datsun 280ZX  Turbo Police Cruiser. While transformed, he retains his intelligence, capacity for speech and mobility.

Prowl’s “logic circuitry” is the most advanced amongst the Autobots. His ability to analyze raw data and generate accurate theories are without peer. This ability makes him the Autobots’ premier military strategist. Unfortunately, he does not react well to the unexpected (or illogical).

Typically, Prowl arms himself with a rifle that fires large pellets filled with a highly caustic acid.

Prowl was one of the many Autobots chosen to destroy an asteroid field that threatened to destroy the planet Cybertron. Immediately after accomplishing their task, Prowl and his allies were rendered inert after a surprise attack from their mortal enemies the Decepticons.

Their leader, Optimus Prime, set their ship on a collision course with a nearby planet to prevent the Decepticons from achieving total victory.

The Ark (their ship), crashed into the base of Mount St. Hilary . It lay there inert for over two million years until the volcanic mountain erupted. The eruption reactivated the Ark’s computer which immediately set about repairing its occupants.

The damaged computer systems mistakenly assumed that the mechanical devices that littered the Earth’s surface were sentient machines, and thus rebuilt the Cybertronians in their image. Prowl was reborn in the image of an Earth police cruiser.

When the Autobots regained consciousness, they decided to explore their surroundings. Prowl was chosen to lead the group. In a short period of time, he led his allies to a nearby drive-in theatre where they were attacked by the Decepticons. The Decepticons attacked the Autobots to prevent them from making potential allies with the Earthlings.

As the battle wore on, Prowl realized that the mechanical devices on Earth were inanimate and that humans were the Earth’s indigenous life-forms. Seeking to protect the “fragile” humans, Prowl led the Autobots away from the Drive-In. In order to do so, he had to leave Bumblebee (who had been wounded) behind.

Soon thereafter, Prowl (along with several other Autobots) set out to rescue his abandoned ally. The Autobots rescued Bumblebee, but drained all of their remaining fuel reserves during the battle.

Later still, when Optimus ordered him to do so, Prowl sacrificed the remainder of his fuel in order to fully empower five of his allies. Unfortunately, despite their empowering, the Autobots failed to stop the Decepticons. They were all rendered inert, save for Ratchet.

Days later, Ratchet woke Prowl and the other Autobots. He informed them that the Decepticons had abandoned the Ark. When they left, they took the head of Optimus Prime with them. With Optimus gone, Prowl assumed command of the Autobots. 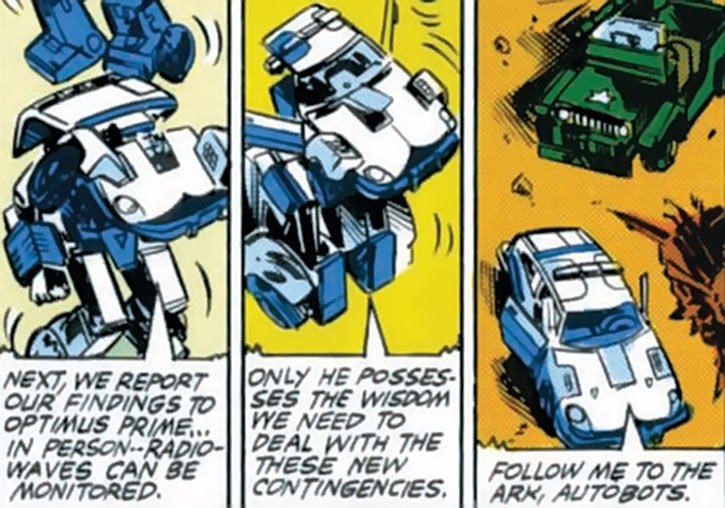 He sent Jazz and Wheeljack to forge an alliance with G.B. Blackrock upon their awakening. Blackrock was the millionaire inventor whose aerospace plants were stolen by the Decepticons. Angered, Blackrock planned to destroy all of the Transformers until the Autobots rescued him from a Decepticon assault.

With the Autobots fuel needs met, Prowl set his sights on rescuing Optimus Prime. When Shockwave sent Jetfire to capture Buster Witwicky, Prowl and the Autobots followed the automaton back to its lair. Despite their attempts at stealth, Prowl and his allies were detected.

Instead of rescuing Prime, they walked into a Decepticon ambush. The Autobots were all but defeated when Optimus Prime returned to their side and foiled the Decepticon attack. Upon conclusion of the battle, Prowl gratefully relinquished command of the Autobots to Optimus.

Prowl is a large, humanoid robot. His chassis is mostly blue with white accents. His fists and helmet are white. His face is clearly human looking, with large white eyes and oval-like protrusions in the location where his ears would be if he were human.

A large ‘V’ like fin sits upon his helmeted bow, and a set of twin wings jut out of his back from just behind his shoulders. Finally, the Autobot brand sits prominently in the centre of his chest plate.

Prowl’s personality is bland. He is quiet, competent and patient. Of all of the Earth bound Autobots, he is quite possibly the most loyal to Optimus Prime. He will follow any order that Optimus issues without question and to the best of his ability.

Prowl’s almost slavish adherence to military protocol, devotion to logic and quiet demeanor can sometimes cause friction between him and his more hot-headed brethren. He tends to alternate between barking orders at them (especially Cliffjumper and Sideswipe) or telling them to quiet down.

“Stay in line, Cliffjumper, you’ll get your chance — on my command only.”

“Come Starscream ! Surely you don’t fear to strike at a foe that is unable to fly, do you ?”

“My logic circuits have determined that the Ark was in error.”

“Your solution, Mirage, is both simple and simple-minded !”

Equipment:
Acid Pellet Rifle [BODY 07, Acid Touch: 10, Range: 09, R#02. Bonuses & Limitations: Wielder must have the Growth Power of at least 05 to be able to effectively wield the rifle.]. 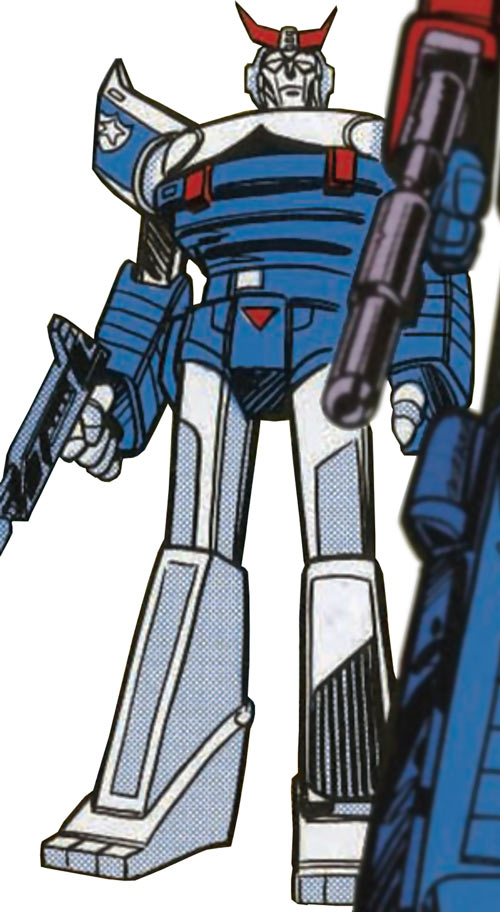 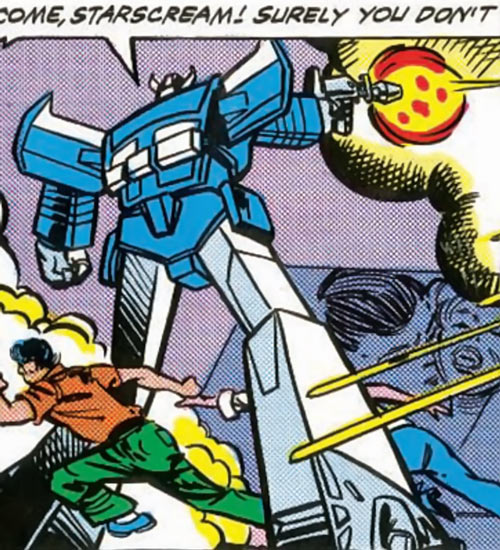 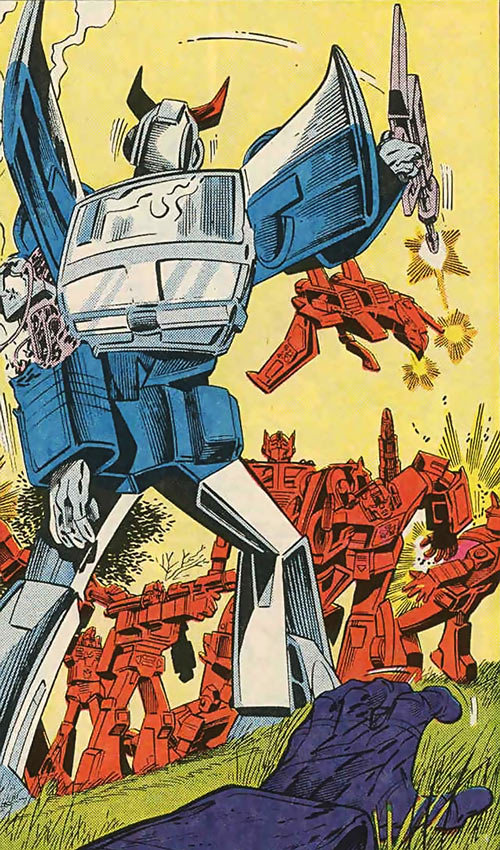