Pru is a skilled assassin. She normally works at close range, using paired mini-Uzi submachineguns. She doesn’t do any sort of finesse, but she can put a lot of metal in the air.

She seems to have a remarkable level of pain tolerance. She also heals unusually fast and cleanly, even from grave wounds. It is entirely possible that she has a minor superhuman healing factor . And this would help explain why she’s in the League.

Lastly, Prudence is a capable fighter, athlete and acrobat, and trained as a sniper’s spotter. She can also handle melee weaponry if necessary.

It is implied that she has some sort of intelligence skills, and that she’s fluent in Spanish.

Pru was originally seen as part of Z’s kill team, a trio of faithful League of Assassins members. She seemed less experienced than Zed and Owens. Presumably, it’s simply because she’s younger.

When the team was mostly slain by the Widower, her throat was slit with a scimitar. However, she was still alive. Her training made her fall on her side, so she wouldn’t be choked by her own blood. This allowed Red Robin (Tim Wayne) to wrap her wound and evacuate her.

The League of Assassins’ medics were then able to save her life. Though she had lost her larynx, this was eventually fixed so she could talk again.

Red Robin worked with the League of Assassins to take down the Council of Spiders. Though she couldn’t talk yet, she accompanied Robin and a dozen League ninja in an operation that trapped Recluse, a Council member. Robin saved her life twice during that fight. Though they took Recluse down, they were the only survivors.

Prudence’s loyalty thus now extended to Robin as well as the League. Robin having ordered that Recluse be taken alive, she threatened fellow League members with her gun when they tried to execute the spider-themed murderer. Though of course this was because she still couldn’t speak, the situation was soon de-escalated and Robin’s orders followed.

During the following confrontation with the Council, Prudence saved the life of Tam, one of Lucius Fox’s daughters. She also helped convince the then-current White Ghost to evacuate in time.

In 2010, Pru was part of a dozen assassins sent to Gotham. Ra’s al Ghul was taking his revenge on Red Robin after they had a major falling out. Prudence was tasked with taking out Tim’s ex, Stephanie Brown.

However, with her dual loyalties, she first explained the situation to Red Robin, *then* pointed a gun at Brown. But even the League’s intel on Brown was outdated. As Batgirl, she had become far more competent. Stephanie promptly took Prudence down. But Tim then realised that Pru’s pistol had been empty all along.

Prudence then fought along with Red Robin and Batgirl against the League’s senior kill team, the Seven Men of Death. The trio held their own long enough to evacuate. In the fight Pru took down Hook. She was slashed by Maduvu, but kept fighting.

In a subsequent encounter with Batman (Richard Grayson) and Robin (Damian Wayne), Damian attacked Pru. He had recognised her as a League operative. However, Red Robin physically stopped Damian.

Soon afterwards, Tim Wayne elegantly derailed Ra’s al Ghul’s plan in Gotham. Ra’s was appreciative of Wayne’s intelligence. He now considered the lad a valuable and honoured enemy, and began calling him “detective” out of respect.

Agent of the bird ?

Prudence then went to work in Uruguay, gathering intelligence on the Council of Spiders for Red Robin. Apparently, Ra’s al Ghul now respected Red Robin enough to allow Pru to serve both him and Tim. She even seemed to have been promoted, since she was now reporting directly to Ra’s. 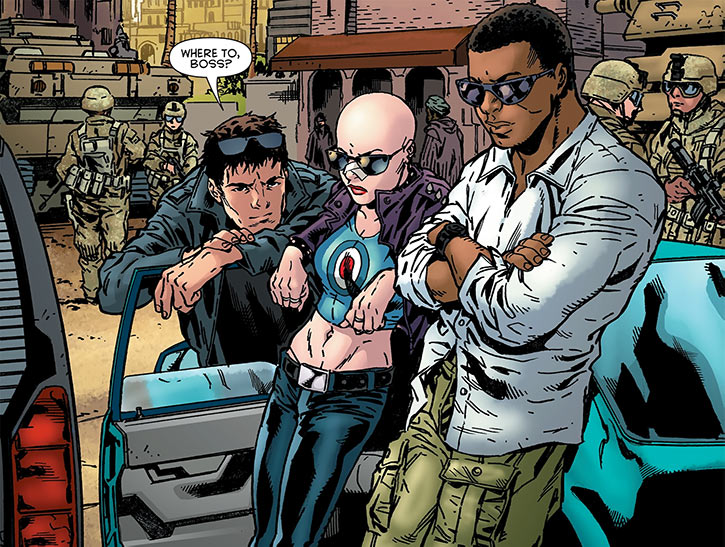 In 2011, Pru returned to Gotham to report to Red Robin. She had learned of an “assassination tournament”, and came in in time to help Tim during one of its “rounds”. She twice helped Red Robin fight off Wolf, Goliath and Funnel of the Council of Spiders.

She also collaborated with a mysterious, masked ally of Robin. Her reports about this figure allowed Ra’s al Ghul to deduce that Bruce Wayne had returned.

Prudence then successfully infiltrated the Council of Spiders as a junior agent.

At this point, the DC Universe disappeared up its own Flashpoint. I don’t think that Pru has appeared in subsequent versions of the DCU.

When in plain clothes, Pru favours punk-styled clothing. It will usually include the tightest, most low-rise pair of jeans  she can cram her buttocks in. Her favourite T-shirt is a tiny belly shirt with a RAF roundel , though she also has Sid Vicious T-shirts . She’s fond of leather jackets with metallic spikes .

If on a tactical detail, she’ll wear SWAT-type BDUs , boots and body armour.

Pru either shaves her scalp clean every day, or is bald. She occasionally smokes.

She has a slight British accent. Perhaps working class Londinian, since her roundel T-shirts are reminiscent of Acton’s The Who .

Prudence is less fanatical, and more free-spirited than most League Members. She came across as an impulsive, aggressive, angry punk – so it is possible she was difficult to indoctrinate. She treats Ra’s more like a respected employer than as a prophet.

She’s also not very good with assessing the consequences of her actions. She’s good at talking without thinking, at breaking rules, and at getting into pointless conflicts.

In combat she’s endlessly swearing, threatening, cursing and acting tough. She’s a real chatterbox, albeit one filled with trash talk and profanity.

Pru is fond of attractive young men. Her favourite part during the Paris mission was that, as the spotter, she was being paid to ogle a shirtless Tim Wayne whilst waiting for the kill order. Best job ever. She also made references to rough sex and bondage, but that may have been a joke.

When she appeared in 2011, Pru seemed to have considerably matured. She seemed smarter, less foul-mouthed, and more focused and professional. But she remains brutal in combat.

Pru has a mild fear of height. But if she’s fighting or otherwise pumped up with adrenaline that doesn’t hinder her. It only makes her anxious when at rest.

Prudence is loyal both toward Red Robin and Ra’s. She seemed uncomfortable when her two loyalties threatened to conflict. Her closest work relationship is with Ra’s (she thoroughly reports to him), but there’s an implication that she’s attracted toward Tim.

Part of her motivation in doing high-risk intel work against the Council of Spiders is avenge Zed and Owens.

Prudence is too aggressive and tends to go for Critical Hits. Which is why she kept missing everybody when firing on high-OV targets.

When ordered not to shoot to kill, she stopped with the constant Criticals and suddenly became able to hit even skilled opponents. I think there’s a life lesson here. 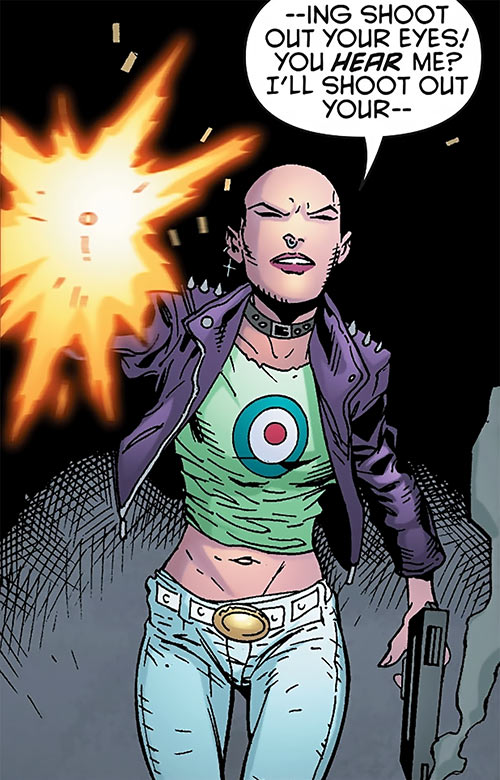 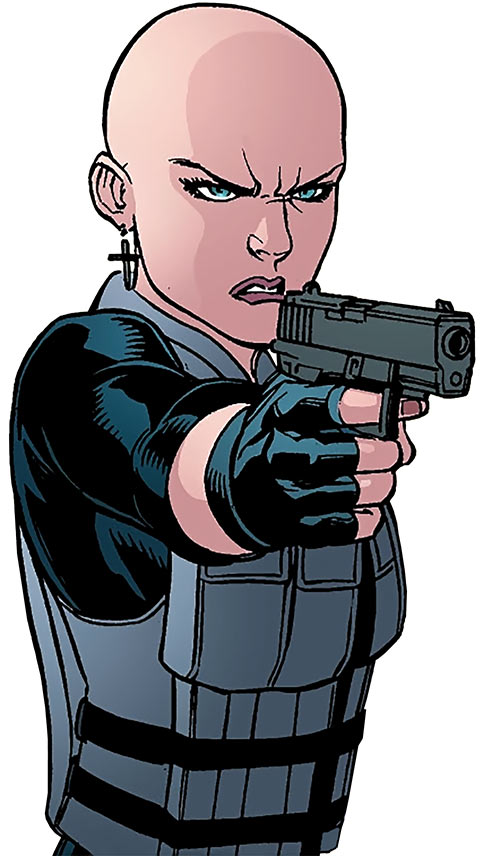 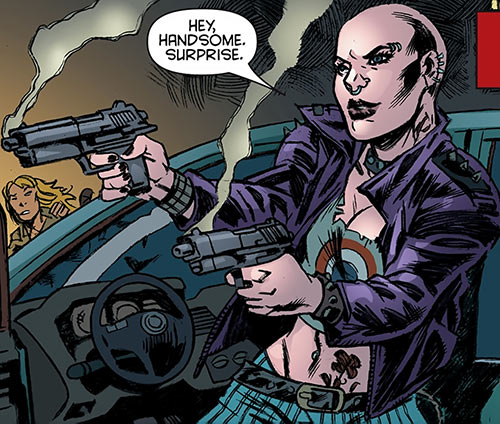