Psi wields a vast array of psychokinetic and telepathic powers, and is psychically sensitive. She proved powerful enough to maul Supergirl into unconsciousness with telekinetic blasts. Though the Maid of Steel wasn’t burning Hero Points , as usual, whilst Psi was backed by her mentor Dr. Pendergast.

Psi could also emit a pink aura of force to block Supergirl’s blows, or reflect her heat vision back at her. She also held Supergirl for a bit in a pink aura, preventing her from moving until the Maid of Might exerted a greater portion of her strength. When experiencing great distress, Marsh reflexively teleported away while telepathically hitting Supergirl with her own pain.

Psi apparently could telekinetically reinforce her own body, or was otherwise superhumanly durable. Supergirl’s blows (presumably with an EV of around 07-08, in DC Heroes RPG terms) didn’t seem to hurt much. Marsh was once punched through an outer wall and didn’t seem to be wounded.

Being unused to super-combat, though, she tended to be disoriented. Especially when Supergirl sent her flying. Psi also didn’t prove as resistant to the Rocket Red armours’s blasters .

Psi displayed the ability to telekinetically rearrange matter a few times, such as when she turned Pendergast into “Decay”. She also once melted a window so she could step through, then reformed it intact behind her. Her abilities seemed potentially vast (in DC Heroes RPG terms, she has Omni-Power).

Born in the Chicago suburb of Skokie, Illinois, Gayle Marsh had a fairly normal childhood. However, by 12 she began exhibiting signs of extraordinary psychic abilities. Her parents were frightened by the powers they discovered in their daughter. Thus, their family doctor recommended that Gayle be turned over into more experienced hands.

He had them contact the Institute for Higher Psychokinetic Study. This was a Chicago-based research facility specializing in the study of extraordinary phenomena.

The researchers at the Institute were excited by the opportunity to study Gayle. They found her telekinetic powers to be among the most powerful ever recorded. One researcher, Daniel Pendergast, found Marsh’s powers fascinating. A friendship quickly developed between him and his young subject.

Initially, Gayle was only to spend a week or so at the Institute. But during her stay her parents were killed in a traffic accident. As Gayle had no other family to take her in, Pendergast petitioned the courts. He was made the child’s legal guardian. 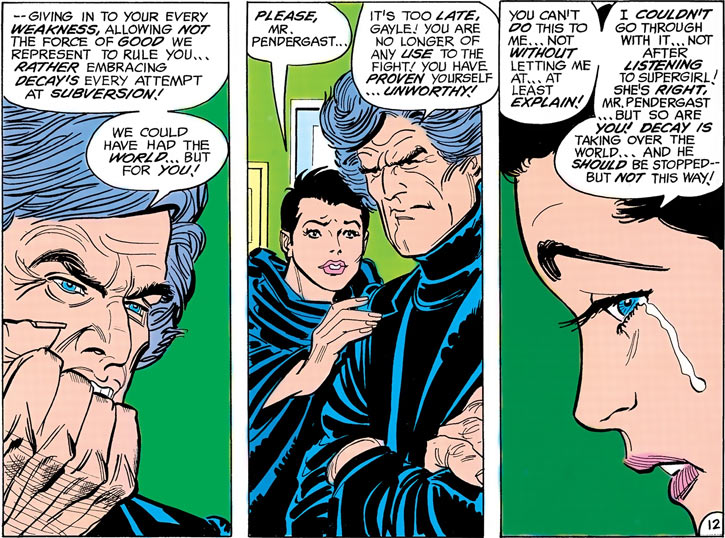 Under Pendergast’s charge. Gayle was taught how to develop and use her great powers. The deluded scientist wanted her to fight a grave, global menace. He saw something he called “decay” as affecting everything and everybody, stripping the world of order and anything that was good.

In Gayle, he saw a pure warrior capable of fighting this force of decay.

By the time Gayle entered college at Chicago’s Lake Shore University, her powers had reached their peak. Dr. Pendergast decided it was time to join the battle against decay. Yet Gayle was hesitant to take up the fight. With her empathic powers, the lass feared that the emotional backlash from her victims would be too painful to handle.

Gayle was unleashed upon Chicago after a frightening encounter on the campus. She had accidentally touched the hand of Linda Danvers. Psychically sensing the presence and power of Supergirl, Marsh assumed she was an agent of decay. Pendergast convinced her to fight. As Psi, Gayle soared over Chicago to attract the attention of Supergirl.

Using her awesome powers, she flattened the Maid of Might. Dr. Pendergast was about to have Gayle kill the heroine, but Marsh desperately bargained for Supergirl’s life. She convinced him that they should keep Supergirl alive for study, in order to develop Psi’s powers further.

But Psi failed to penetrate the mind of the Maid of Steel, who revived. Seeing that Psi intended to raze Chicago to destroy “decay”, Supergirl flexed free from Gayle’s telekinetic restraints. The Maid of Might started hitting Marsh, calling her a deluded maniac and would-be mass murderer rather than a glorious saviour and pure warrior against taint.

Knowing Supergirl’s words to be true despite Pendergast’s angry rants in her head, the crying Psi snapped. She stunned Supergirl with a bolt of sheer psychic pain and teleported away.

Psi came back to her senses on Pendergast’s couch. The doctor was verbally abusing her, telling her how she was an utter failure. He then produced a gun, and Psi instinctively struck first. She somehow restructured Pendergast’s body into what he feared the most – an incarnation of “decay”.

The decayed Pendergast went on a rampage, clashing with Supergirl. Psi had fainted, but as she awakened, she felt a strong, painful connection to the decayed researcher. Gayle flew to him, looking for a way to put an end to the pain.

When she found him, he was starting to hurt Supergirl. Using her psionic might, Psi destroyed the decayed form, restoring Pendergast’s human form. She then vanished in a pink flash.

Psi erased her memories of those events to ease the trauma. This left her a self-induced amnesiac. As she started investigating whom she was, the authorities became involved. Marsh had asked for help in determining her identity and controlling her powers.

As a consequence, she was drafted in the Suicide Squad for a mission. As often, it broke bad. Psi was killed by Rocket Red power armour  soldiers. As she died, the self-imposed blocks lifted and she remembered her parents before passing away.

Gayle Marsh was later spotted as a zombie during the Blackest Night  events.

Gayle is a weird, shy student. Her head has been pumped full of delusions about how bad the world is, and how the devil is everywhere. She doesn’t fit in at all. Although she dresses normally for a student of her age, she’s a cult victim.

Psi wants to be a haughty warrior for purity. But she is too fragile and sensitive to achieve much in that role. However, Pendergast is always telepathically standing on her shoulder, accessing her might in her stead.

This is confusing for onlookers who do not follow the telepathic dialogue inside Psi’s head. She keeps shifting from confused and frightened teenage girl to overbearing fanatic with mass murder on his mind.

Psi always knew that what Pendergast was doing and asking was wrong. Yet she couldn’t muster the courage of actually doubting his word before her encounter with Supergirl.

As a sensitive, Gayle feels the pain of people around her. Thus, she is reticent to hurt anyone. It’s nearly always Pendergast who has her steel herself in order to blow somebody away.

Due to her empathy being constantly working, she tends to conform to the expectations of others. She acts like other people around her expect her to. Thus, she agreed to be Pendergast’s lover as she felt rewarded by his own pleasure.

When among the Suicide Squad she acted like a tough, arrogant criminal, matching the people around her. This further allowed her not to think for herself, which she’s afraid to do. And it hid the fact she’s confused and scared.

This never completely works, though. Even though she played the part of the tough villain with the Squad, she was shocked when Weasel messily killed a soldier. Then she was overwhelmed by the resolution of the Rocket Red soldiers, and the many minds experiencing high tension during that fatal battle.

“I suppose. But those people — dying — killing each other — rotting their bodies with drugs —! Sometimes I’m not sure I can handle it, Mr. Pendergast ! I mean, I can almost feel it — like it was a real, physical thing ! Every time someone dies or hates or destroys … I know it — like it was me doing those things ! I dunno… Maybe you’ve been wrong all along. Maybe I am crazy !”

“Lord… it was terrible ! I’ve never felt such… such raw power in my life ! Why didn’t Mr. Pendergast warn me they’d be coming ?“

(Pendergast speaking through Psi) “You pitiful fool ! I could almost feel sorry for you, were not your master the foul being which hungers for the death of our world ! In another time, I might be tempted to spare you… but I’ll not give in to the Decay’s fetid temptations… not with so much at stake !”

“It’s no trick, mister Pendergast ! But I can’t let you continue this — it’s wrong… it’s evil… and… and… it hurts me ! You’re bad, Mister Pendergast… and… and… I’m so… sorry…” (psionically blows away the decay creature)

Unreal ● 10 points ● Descriptor: Psionics
The Gamemaster may elect to have Psi manifest additional effects as if she had Tiring Ranged Variable 18 (psionics). The Player can of course make suggestions, but this is only used at dramatic moments as part of the story. Turning Dr. Pendergast into his decayed form was an example.

* Without Defensive Roll
** Against psionics and similar

Her PL is all over the place since so much depends upon which part of her Array is currently active.

Helper(s): The Belle Reve Sourcebook (Mayfair) ; History section originally based on the one in DC’s Who’s Who ; numerous comments from Gareth Lewis and Chris Cottingham. 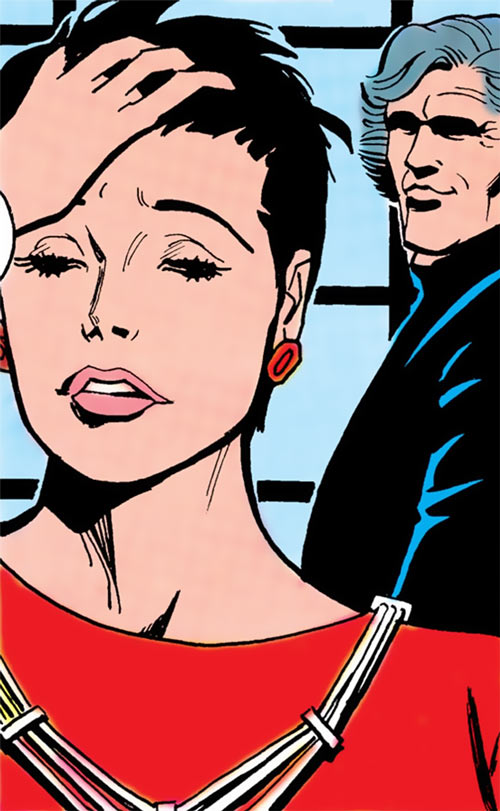 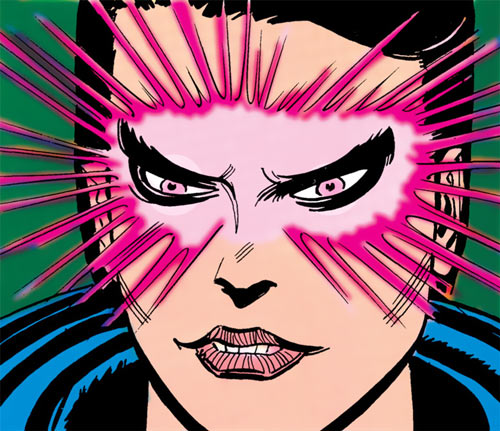 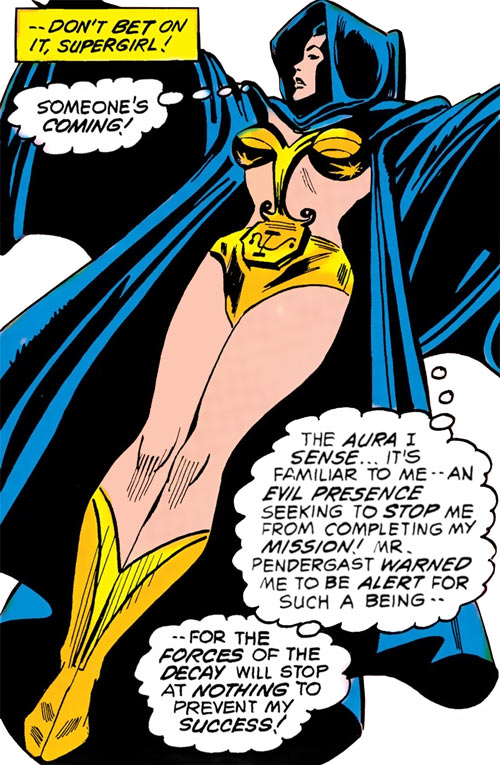 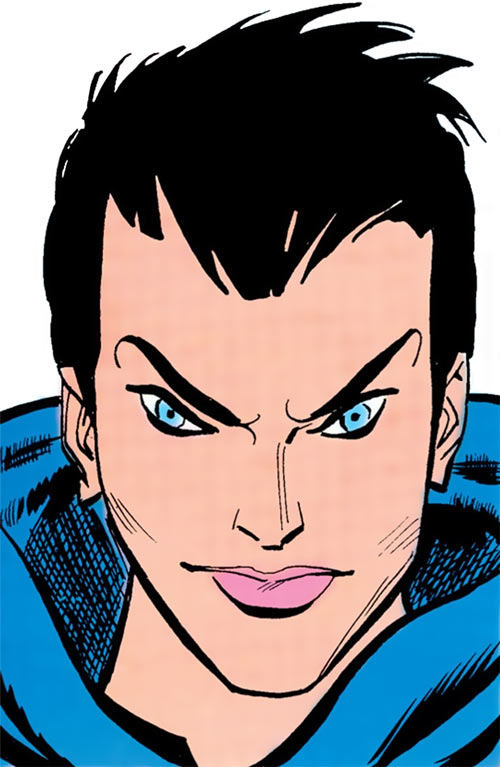