Psilence is the mandatory telepath on the team. She often stays immobile, hidden and concentrated not far from the team. From there she’ll be relaying and channelling thoughts between team members. Psilence will only take an active role against other psychics and in low-danger situation.

Psilence does not talk. Instead she sends or broadcasts her thoughts, and constantly read the superficial thoughts of those around her.

The Bloodpool project wasn’t the finest moment of the US government’s special projects involving superhumans.

About 20 nu-gene active teens were recruited from their families, prodded, tested, operated on, genetically and cybernetically enhanced, and subjected to a dangerous and gruelling training. The promise was that they could one day join the prestigious Youngblood action team, a powerful combat force and media tool for the government.

However, there was a crisis in the Youngblood organization when director Graves was discovered to be a demon. During the upheaval, the new director, Battlestone, decided to forego the Bloodpool contracts. Despite all the promises and all they had been through, the Bloodpool subjects were downsized.

A few of them (Task, Psilence, Wylder, Fusion, Rubble, Seoul) chose to follow the advice of one of Seoul’s spirit guide and, with the support of former Youngblood leader Shaft, struck on their own as a private, hero-for-hire outfit. An early, lucky meeting with a millionaire in an unfortunate situation bankrolled them, and the group, which carries on the Bloodpool name, soldiers on.

Psilence is a cold, strong, no-nonsense young woman. She is undeniably the most mature and experienced personality of the team.

Psilence has an opinion on nearly everything, and can get quite authoritative. But then she’s the one managing the team, its finances, contracts, communications and so on. She does that with a certain shrewdness.

She seems to have little respect for psychic privacy, and to easily hold grudges.

The Bloodpool might stay a failed government attempt at a super-group. Perhaps a Task Force X remnant that Amanda Waller killed in order to make more space for her pet Suicide Squad.

Bonuses and Limitations:
Control, Mind blast and Mind probe have No Range (-1). 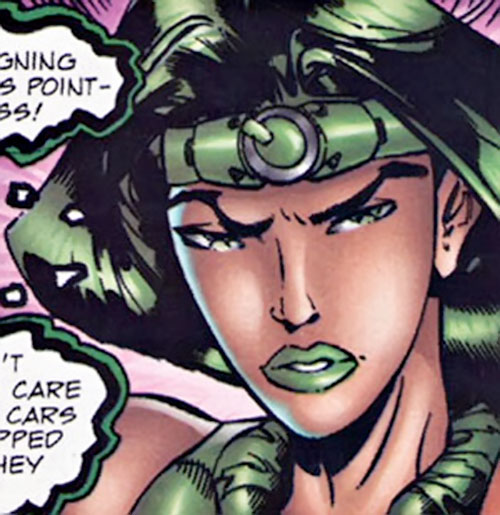