The Psycho-Man uses human-sized body armor when traveling through the Earth. The suit provides increased protection from injury as well as phenomenal superhuman strength. The Psycho-Man has also used a 200-foot tall version of his armor, with proportionately increased armor and strength.

But his primary weapon is his “emotion control box”. It can induce specific emotions into his victims:

Scrutinizing the Earth with his scanning devices, he chose it as the perfect target. Its populace appeared to be defenseless against his unique weaponry for influencing emotions. The scientist traveled to Earth where he called himself the Psycho-Man.

To ensure his own safety, the Psycho-Man did not enlarge himself to human size when he went to Earth. He remained too small to see, and operated from within an Earth-human-sized armored battlesuit. On Earth the Psycho-Man’s power armor  used a portable “mind-ray” device that could influence people’s emotions.

He enlisted Human operatives (Ivan the gunman, Livewire, Shellshock) to build a large-scale version of his “mind-ray” emotion-control device. It could blanket the entire world with its rays. Building the machine on Earth was far easier than having it travel there from Sub-Atomica.

This was thwarted by the Human Torch (Johnny Storm) and the Thing (Ben Grimm), the Black Panther (T’Challa), and members of the Royal Family of the Inhumans. In defeat, Psycho-Man vacated his armor and returned to his home dimension.

The men of the Fantastic Four went to the Psycho-Man’s microverse and battled him there. But they had to let him go in order to return to Earth, which was under threat from Galactus.

In 1980, the Fantastic Four and the Micronauts, adventurers native to the Psycho-Man’s microverse, clashed with him. At this time the Psycho-Man claimed to be an exile on his world-ship. Probably he had been exiled by the people of Sub-Atomica. 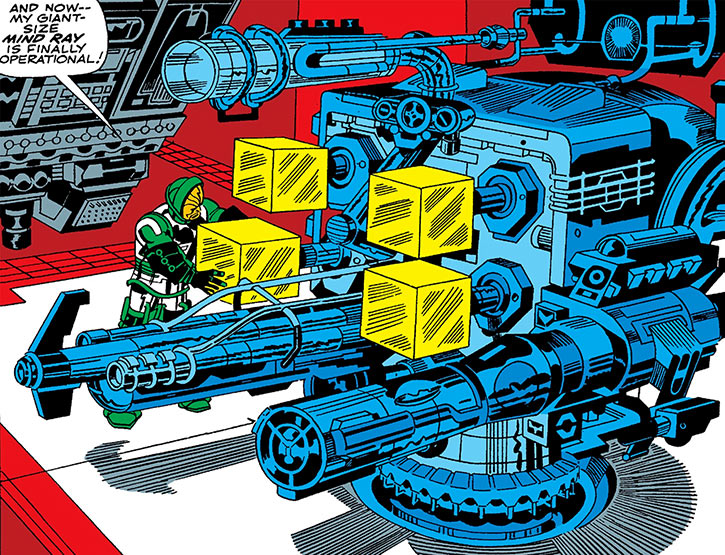 In 1985, the Psycho-Man returned to Earth. He unleashed an android which went by the name of H.M. Unger, also known as the third Hate-Monger. This android could alter its appearance. It went about New York City stirring up hatred.

The Hate-Monger even used its powers on Susan Richards, twisting her love and compassion into hatred. He dispatched her to destroy her teammates in the guise of Malice, Mistress of Hate. But Susan’s husband, Mister Fantastic, induced her to break free of the Hate-Monger’s conditioning. The Hate-Monger was soon destroyed by the vigilante Scourge.

It is not known exactly what the Invisible Woman did to him, but she believes he will never threaten anyone again.

Pearla regained control of her kingdom, largely thanks to the metal in her headband, which rendered her immune to Psycho-Man’s powers.

Psycho-Man sees sentient beings as tools and pawns. He views everything from a standpoint of resources and scientific research…or so he says. He seems to gleefully enjoy experimenting with sentient lab animals far beyond scientific curiosity. He is so fascinated with the responses he generates that he tends to get distracted and disregard other concerns.

As a denizen of one of Marvel’s Microverse’s, Psycho-Man is an ideal opponent for the Atom, Ray Palmer. He might have been allied with Psycho Pirate or with Micro Force, the government agents shrunk in size by Palmer at the end of the The Power of the Atom comic.

He would be a strong classic Justice League villain, especially with his history of taking on Sue Richards in comparison with Carol Ferris’s Star Sapphire problems. Personally, I plan on teaming him in a non-DC Universe campaign with several Legion of Super-Heroes villains.

Bonuses and Limitations:
Shrinking is Always On.

While Psycho-Man’s Physical Attributes have never been displayed, his absolute reliance on his armor and gadgets, and cowardice when lacking the upper hand in a confrontation, it can be assumed that they are in the low-to-mid range for a non-powered human being. In doubt, we gave him 02s.