“This Psycho-Pirate is a dangerous criminal. His robberies and thefts are startling in their stark realism. By diabolical means he stirs men to rage, to hate, to sorrow.”

The Psycho-Pirate is a secondary DC Comics super-villain.

But he has been in notable storylines, as his emotions manipulation abilities make him handy for writers.

The Psycho-Pirate first appeared all the way back in 1944.

However, this first version wasn’t that notable. He only counts as a super-villain retroactively. Because his successors had a costume, special powers, etc..

So he might be considered the third Justice Society of America super-villain, after the Brain Wave (Henry King, Sr.) and King Bee (Elmer Pane). Retroactively.

Back then, “Psycho-Pirate” more clearly conveyed the notion of a person hijacking others’ psychological buttons. But the term “psycho” was becoming a thing – usage in print started strongly developing in 1941.

The Psycho-Pirate is an elite criminal planner and psychological manipulator. He relies on deceit, trickery, and pushing his victims’ buttons.

He also is a good linotyper, and knowledgeable about press publishing.

His gangsters are more competent than usual. A fair few are trained actors and/or conmen, and they have at least one costumer available.

The Pirate sometimes carries a .45 ACP pistol, and is a surprisingly good shot.

He has a large hideout, and a fair bit of cash on hand.

Curiously, he’s a qualified monoprop pilot. Heh, perhaps he was a Lafayette pilot during WWI or some such other nice story hook.

Charles Halstead was a linotyper working for the Daily Courier. He was a good friend and trusted helper to the paper’s publisher, Mr. Morgan.

(Linotype was a convoluted tech to quickly assemble metallic letters into lines, making printing text a much faster process. 15-ish years later it would be replaced by phototype, which used a completely different approach).

However, he grew jealous of Rex Morgan’s success. Halstead created the persona of the Psycho-Pirate, and started a complex psychological manipulation.

As the Psycho-Pirate, he gained contacts among various mobs and shady actors.

He then launched a lengthy crime wave based on psychological manipulation. He turned people’s emotions against them to make a pretty penny.

As Halstead, he also suggested that the Daily Courier launch a crusade against this new villain, “threat or menace ?” style.

Halstead persuaded Morgan to go all-in with it. This focus made the Courier lose a large chunk of its readership, and Morgan borrowed heavily to stay in the black and continue his fight.

As was the style of the day, the undefeated Psycho-Pirate challenged the undefeated Justice Society of America. This was announced in the Daily Courier, of course.

As was the style of the day, each JSAer took on an individual case, each involving a different emotion.

Let’s quickly describe these, for those who want to use this Psycho-Pirate in a story.

Mobsters pretended to kidnap the beloved daughter of a business mogul, who had naïvely been dating a wise guy.

When the Hawkman (Carter Hall) intervened, the criminals told him that they were holding Shiera Sanders hostage.

Carter rushed to Shiera’s rescue, but this was a death trap. However, he managed to jam the moving walls of Shiera’s cell before it crushed them both.

Two bitter business rivals are manipulated into enrolling at a fencing school.

This school secretly organises duels to the death between people who hate each other, after training them. They also dispose of all proof afterwards.

Starman (Ted Knight) finds them in time. However, seeing how the two men have been manipulated angers him, and he falls into a death trap as result.

Starman narrowly escapes. He arrests the Pirate’s men at the salle d’armesA place to practice fencing. and explains to the duellists how they’ve been tricked.

The Pirate cuts all communication and access to the wealthy suburb, Carse City. With the city having been thus “kidnapped”, he threatens to kill them all using a ghastly disease if they do not pay a ransom.

Doctor Mid-Nite (Charles McNider) is let in. Though even he fears getting infected, he rallies and takes out the Pirate’s men who are manufacturing the virus.

But just like the tycoon’s daughter had never been kidnapped, there never was a virus. The plot was entirely relying on people working themselves up into a panic.

The Martin brothers design safes for banks and other businesses. They are smugly convinced that none can defeat their product.

Thus, when a bank calls because they no longer can open their own safe, the Martins have a good laugh and come in to help.

Of course, the bank is now controlled by the Pirate’s gangsters. They further flatter the brothers, and capture them once the safe’s open.

Once that goofball Johnny Thunder comes in, the Pirate’s men make a big show about fearing him as a redoubtable crime fighter.

This goes to Johnny’s head, who’s easily captured and then refuses his Thunderbolt’s help to prove that he can escape the safe on his own.

However, the Thunderbolt mostly acts on his own, foiling the crime despite Johnny’s conceit.

Two American wealthy collectors each own one of two existing, supposedly cursed Tibetan statuettes. An agent of the Pirate offers each man to steal the other’s prize, for half a mil.

He then pretends to have almost been arrested, and to have thrown the stolen statuette away. But he demands to have the other statuette, to replace the supposedly stolen one. If not, he’ll reveal who hired him.

When the Spectre intervenes, the Pirate’s men have thus collected a million plus the two statuettes. And the agent offers to take the Spectre to the Psycho-Pirate, who he says has betrayed him.

The Spectre falls into the trap, as he craves protecting his fellow JSAers from the Pirate’s deathtraps.

However he resists the toxic gas long enough to smash a window open. He thus captures the Pirate’s men and their plunder.

The Atom (Al Pratt) is guarding Mr. Morgan, the Daily Courier’s publisher. But a deluge of bad news comes in.

Within minutes Morgan has lost everything he owns or loves. And the radio announces that the Psycho-Pirate has defeated the entire Justice Society, minus the Atom.

The Atom is then challenged to enter the Psycho-Man’s hideout. In cells there, he finds actors disguised as his fellow Society members, telling him they’re all beaten and it’s hopeless.

The Atom rallies and defeats the crooks, but the Psycho-Pirate then shoots Pratt in the shoulder.

If not for this meddling kid !

Against all odds — and blood loss — the Atom makes it back to town.

He warns the Society that Halstead is the Pirate, and the predatory manipulator is undone. 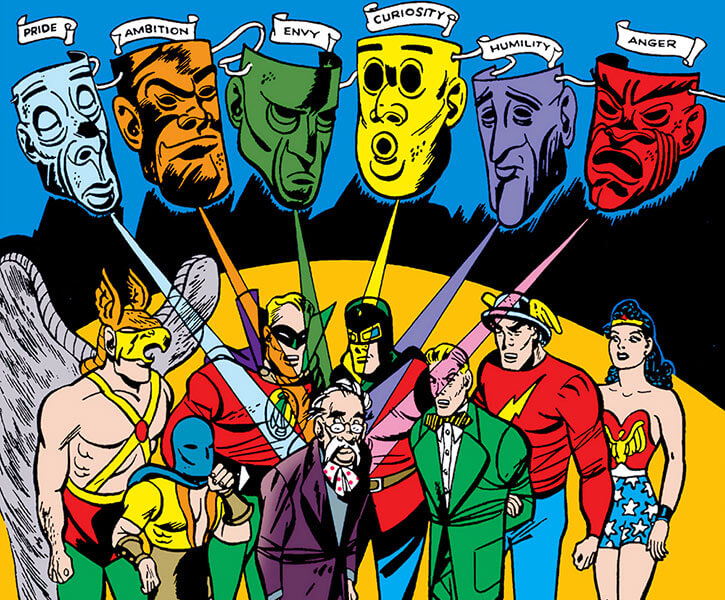 The Psycho-Pirate remained in jail until 1946. He then escaped along with his brutish cellmate, Big Mike.

(The cover of this issue — above — shows a colour-coded spectrum of emotions. Which is mildly amusing given developments in Green Lantern lore that happened decades later.)

Big Mike resumed control of his criminal crew, plus Halstead as his advisor. But though Halstead wanted to avoid the Society, Big Mike craved revenge.

He set up Psycho-Pirate-style crimes, then lured the Society into intervening. By this point, Halstead had little choice but to help after all.

These emotions-based crimes were cruder :

Society members foiled all of these.

Furthermore Big Mike, not being the brightest, had accidentally revealed his address when he lured the Society in. They therefore arrested him, his gang and Halstead.

During the early 1960s, one Roger Hayden ended up in the same prison cell as the aged Charles Halstead.

Still not over his 1940s heydays, Halstead specifically wanted Hayden to become his successor. So there again would be a Psycho-Pirate as his revenge against law and order.

He trained Hayden, and told him of his research about the lost Medusa Masks.

Soon after Hayden left prison, archaeologist Kent Nelson (a.k.a. Doctor Fate) discovered the Medusa Masks in Asia Minor. Hayden would soon activate and steal them to become the new Psycho-Pirate.

As he trained Hayden, Halstead thought that he didn’t have much longer to live. Since he likely was born during the 1890s, that he indeed died of old age after the new Psycho-Pirate’s debut seems likely.

In 2005, another version of this story was told by Hayden.

In this take, Halstead was still ranting about the power of emotions to achieve control of others, and his clashes with the Justice Society.

Hayden was loudly dubious about this. So Halstead told him about stolen artefacts he had hidden away – the Medusa Masks. Roger found Charles’ loot, confirmed that they had powers, and soon melted them into one mask to become the new Psycho-Pirate.

That there are changes is curious, since Hayden is one of the few people who remembers pre-Crisis On Infinite Earths Earth-1 and Earth-2.

On the other hand, his sanity isn’t the greatest.

Furthermore, there were further Crises between 1985 and 2005. It is possible that they indirectly altered Hayden’s memories. Or even retroactively altered these realities, even though they no longer exist.

He looks like a harmless little old guy, with a huge drooping moustache and big tufts of hair coming out of his ears.

He wears the stereotypical visor and shirt of a print shop worker of those days.

During his 1946 return, his hair was much thinner on top, and had turned white. But oddly enough, flashbacks set after 1946 tend to show him with his younger appearance.

Not much is apparent in the story. He had an emotional meltdown once he was exposed, but that was just some on-the-nose storytelling.

In the second story he was little better than an incompetent, emotional jobberWrestling slang for a wrestler who almost always loses..

(No-Prize HypothesisA made-up explanation to plug a plot hole. – Halstead was suddenly markedly older and duller due to a magical curse tied to procuring the Medusa Masks. But Halstead eventually determined that Hayden wouldn’t be struck by the same curse due to some arcane property of his. Like a pre-Atlantean star sign or something).

Dr. Faustus (and his student Karla Sofen) are close equivalents of Charles Halstead. So Faustus might have studied with Halstead — or more likely, studied Halstead — during his youth.

Older and weaker in his second appearance.

The stats are for his first appearance, where he reasonably could be called a mastermind.

For his second appearance, it seems likely that none of his scores now went past 04 APs. And he seemed to, somehow, have the Age (Old) Drawback.