Psylocke is a powerful telepath, able to use her abilities in a variety of ways, including:

Uses of her telepathic abilities are often accompanied by a visible manifestation. It is around her head, near or on her target, or on its own if she’s observing from afar. This is a kind of butterfly shape, with eyes on its wings (see illustrations).

She wears a suit of light armour which affords her a high degree of protection from physical attacks. It allowed her to survive blows from Rogue.

Initially Elizabeth only really had precognitive abilities, which appear to be uncontrollable. But these have become less frequent as her telepathic abilities have increased.

The second child of Sir James Braddock, Elizabeth Braddock grew up in English society. She shared a close connection with her twin brother Brian. But as they grew up her adventurous nature drew her closer to their older brother Jamie. Betsy had become a charter pilot by the time their parents died in an apparent lab accident.

When Doctor Synne tried to kill Jamie, Betsy was flying Brian home. Synne’s psychic attack caused her to crash. This allowed him to exercise control over her mind, later causing Elizabeth to attack her brothers, seeing them as monsters.

Hospitalized, she recovered from the event in time to be kidnapped with Jamie by agents of the Red Skull. They were rescued by Captain Britain and Captain America (Steve Rogers), and Betsy learned that Captain Britain was actually her brother, Brian. He disappeared for a while after this.

Betsy became a model. Possibly as a result of Synne’s mental intrusions, she also developed mental abilities, primarily precognitive. After being recruited into S.T.R.I.K.E.’s Psi  Division by Agent Matthew, she began to develop telepathic abilities. She started a relationship with fellow psi Tom Lennox.

This is also when she began dyeing her hair purple.

Due to her father’s connection to the Hellfire Club, she was sent to infiltrate it. But she was warned off from doing so by Tessa, for her own protection.

The Psi Division were the first to detect when the crime lord, Vixen, began to take over S.T.R.I.K.E.. They were unable to do anything about it, which forced to go on the run from the assassin she’d sent after them. Learning that Brian had returned to Earth, Betsy contacted him for help. He quickly came to her aid, battling Slaymaster, and eventually beating him.

Betsy and the other surviving Psi Division members, Tom Lennox and Alison Double, moved into Braddock Manor with Brian for protection.

Before they could think of moving against Vixen, they were overwhelmed by encounters with the Special Executive, Captain U.K. (Linda McQuillan) and the Fury. During the battle against the Fury, Betsy had premonitions of a future where superhumans were imprisoned in concentration camps. This reality which soon came to pass thanks to Sir James Jaspers, an insane reality warper. 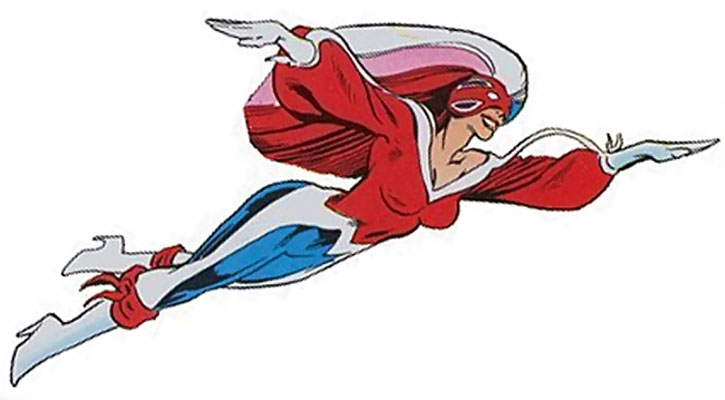 Coming to power in Britain, he had S.T.R.I.K.E. forces rounding up those with powers. When they found Betsy and her friends, Tom was killed trying to buy them time to escape. But Betsy had been in his mind at the time. The shock left her stunned, and easily captured.

She was nursed back to health by fellow inmate, Victoria Bently. Elizabeth was freed when Brian beat Jaspers, after which she returned to Braddock Manor with Alison. When Brian’s identical counterpart from Earth-794, Kaptain Briton, managed to take his place, he tried to rape Betsy. But she lashed out with her mental powers and killed him.

Matthew, now using the name Gabriel, and Michael, the heads of the R.C.X. (Resource Control Executive), turned up at Braddock Manor with the Warpies seeking refuge. The Warpies were children transformed by Jaspers’ warp. Many now had inhuman appearances.

While Brian was against allowing a government agency use his home, Betsy was swayed, giving her permission.

Brian moved out, and soon seemed to give up the role of Captain Britain. Part of Gabriel and Michael’s plan had been to gain some influence over the Captain, so as to gain some political leverage to ensure the R.C.X.’s survival. With Brian’s departure, they convinced Betsy to don the costume left by Kaptain Briton. Thus, she became the new Captain Britain. 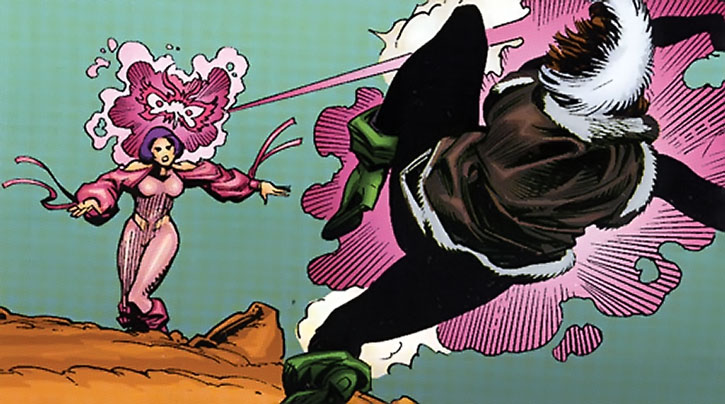 Trained by Captain U.K., the pair worked together until Linda decided Betsy was capable of operating on her own. Her independent career didn’t last long, though.

She fell into a trap laid by Vixen. Elizabeth found herself facing Slaymaster, who beat her, and gouged her eyes out. In pain she let loose a psychic scream which her brother heard. Brian arrived in time to stop Slaymaster from finishing her off, killing the assassin in the process.

Refusing R.C.X.’s offer of cybernetic eyes, Betsy preferred to rely on her psychic abilities. Getting engaged to Gabriel, they moved to Alison’s place in Switzerland for Betsy to recover.

Kidnapped from there by Mojo, Betsy was brainwashed. She was also given a pair of cybernetic eyes which allowed him to constantly monitor her, and was made the star of his new show, “Wildways”. Under his control, she abducted members of the New Mutants, swaying them to serve Mojo.

The remaining New Mutants, Cypher and Warlock, aided by a de-aged Brian, rescued them. An attraction developed between Betsy and Doug (Cypher). Betsy moved into Xavier’s mansion to recover.

When the Marauders attacked the Morlocks, Betsy, now calling herself Psylocke, helped with relief efforts in the mansion. Her help was welcome, as some of the X-Men had been badly injured in the attack. While the able X-Men were hunting for the Marauders, Sabretooth breached the mansion.

Betsy led him away from the injured. She held her own long enough for the X-Men to return and drive Sabretooth away. Following this, Wolverine nominated her for membership. Ms. Braddock joined the X-Men.

On first joining the team, Psylocke was uncertain whether she was cut out for that kind of life. But when the team was kidnapped by Horde, and forced to enter the Citadel of Light and Shadow to acquire the Crystal of Ultimate Vision for him, they were met with tempting visions of their deepest desires.

Psylocke was one of the few to resist its allure. She thus learned that the strengthening will she was developing was not due to what she had endured. Instead it was her growing into what she was born to be, a warrior.

Alongside the X-Men, she continued to battle the Marauders. They also came into conflict with the Juggernaut, Dr. Doom and Mephisto.

After the X-Men battled the Adversary in Dallas, apparently sacrificing themselves in a televised battle, they were secretly restored to life by Roma. Roma also made them undetectable, neutralizing Mojo’s ability to see through Betsy’s eyes. Roma also gave them the Siege Perilous, which they could use should they ever want to start new lives.

Attacking the cyborg Reavers, the X-Men claimed their Australian outback base as their own. They operated from there in secret, the rest of the world believing them dead. After they’d lost a few members, Betsy began having worrying dreams. She had a vivid premonition of the surviving team members dying at the hands of the surviving Reavers, should they return to the base.

Deciding on her course of action, Betsy influenced the others, already tired from their recent ordeals, to step through the Siege Perilous to new lives. She followed them through just as the Reavers came upon her.

Composed and reserved, Betsy usually remains calm even in stressful conditions. She is a calculating combatant, capable of taking over direction of the battle if the team’s leader is indisposed.

Her genteel surface belies a ruthlessness that can rival Wolverine’s. She only loses her cool when she feels helpless, or when encountering those who’ve victimised others.

Initially Betsy seemed a bit flighty, and often overwhelmed by the situations she found herself in. By the time she worked for S.T.R.I.K.E., she’d become a little more self-reliant, but still wasn’t really a combatant. This seemed to have changed by the time she donned the Captain Britain suit.

It was when Horde forced the team to work for him that she began to glimpse her true nature as a warrior. This manifested itself within the Citadel of Light and Shadow as her peeling off her skin to reveal a core of metal beneath.

While she appears to have accepted this role, she later had nightmares wherein she was partly mechanical. So it’s possible she hasn’t fully come to terms with it, unconsciously.

“I have been hungry, Spiral, homeless – hunted – hurt, in body… and spirit. All these things I swore I would never be again. You offer salvation. I prefer to make my own !”

Drawbacks:
Misc. Drawback (She has a fear of Slaymaster, resulting in -1CS to her AV/OV/EV/RV when fighting him).

Following her resurrection by Roma, Betsy and the other X-Men were made undetectable by anything other than natural senses, apart from the technology in their Australian base. During this period she had Invisibility (only against non-sentient, mechanical observation): 12, and Obscure: 15.

The artificial eyes Mojo gave her allow Betsy to cope with rapid shifts in light intensity, making her resistant to blinding attacks, and giving her Shade: 06. They also allowed him, through Spiral, to monitor her activities at all time, and this facet did not appear affected by the undetectability Roma gifted her with.

In her initial appearances Betsy was strictly a supporting character, with no powers, minimum stats, and a tendency to be kidnapped by her brother’s enemies.

During her time with S.T.R.I.K.E. Precognition was her main power, and it only became Marginal following Tom’s death.

The Captain Britain costume she temporarily wore conferred upon her some of the same powers her brother had. At this point she had 20 HPs. COSTUME [/DEX/ 08 /STR/ 09 /BODY/ 07, Flight: 10, Force Field: 04, Mystic Field: 04. Bonuses & Limitations: Force and Mystic Fields are limited to Range of Self, and Betsy may attack through them]

She only gains the Misc. Drawback after being beaten by Slaymaster.

At the time she joined the X-Men, her Mystical Stats were 4/4/5, rising to the listed levels by the end of this period.

She only started wearing the ARMOR after the X-Men relocated to Australia.

Her fear of Slaymaster isn’t shown until she encounters an alternate reality duplicate of him during the period covered by the Psylocke (Current) profile, but is included here in case this version should encounter a version of him.

* Without Defensive Roll
** With armor 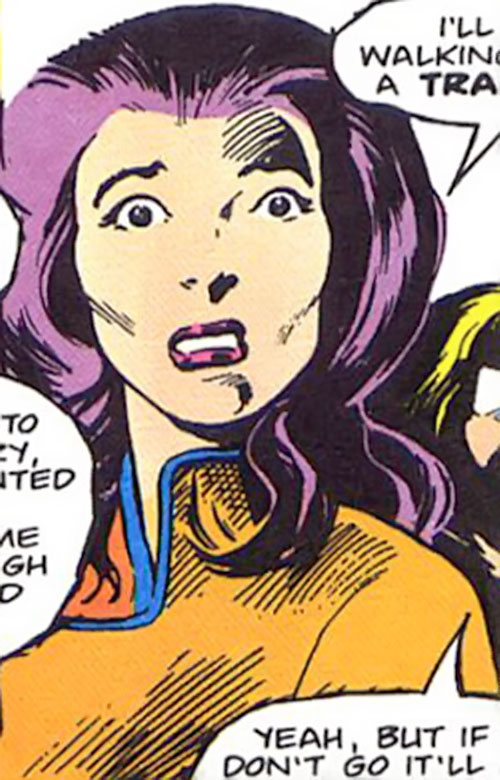 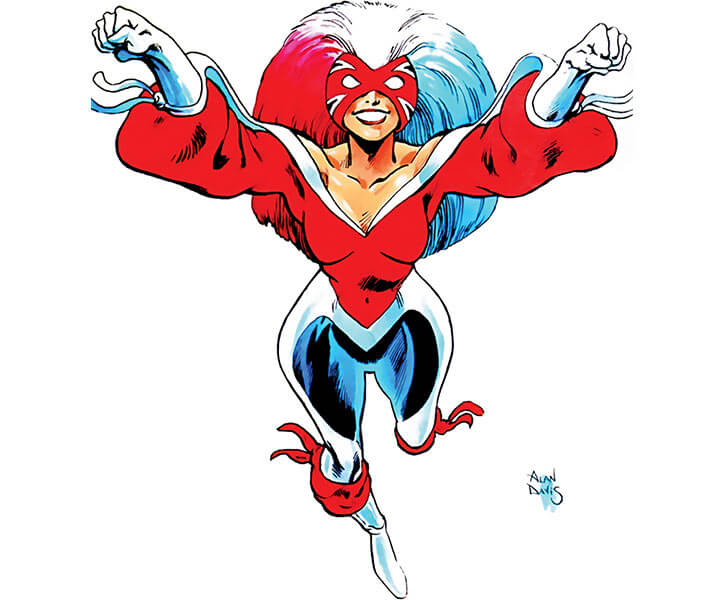 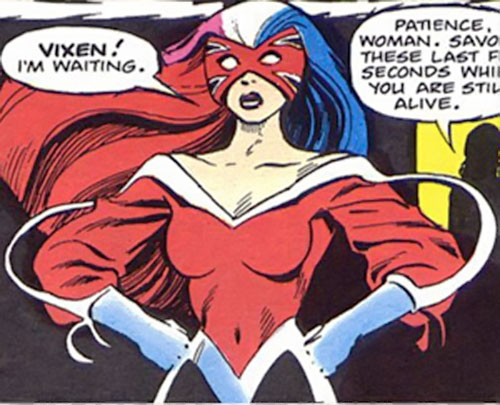 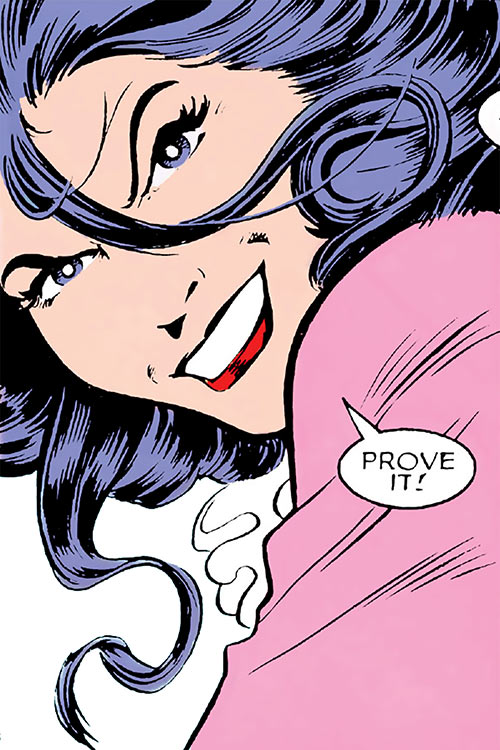 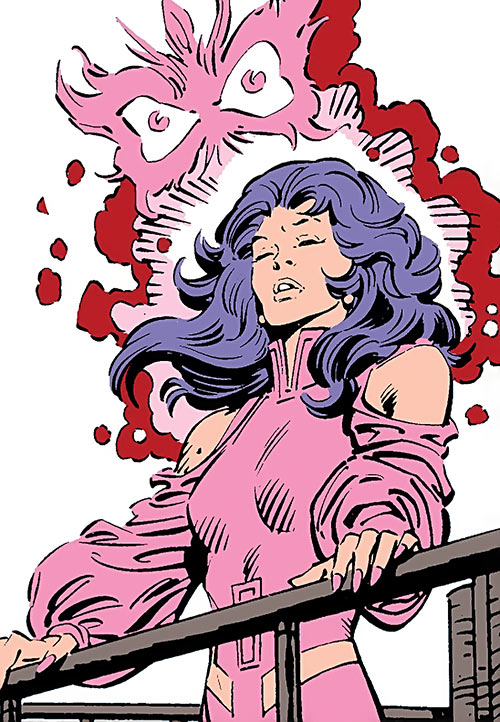 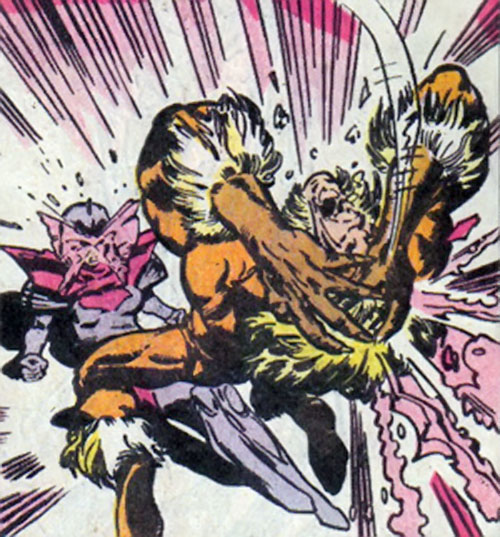 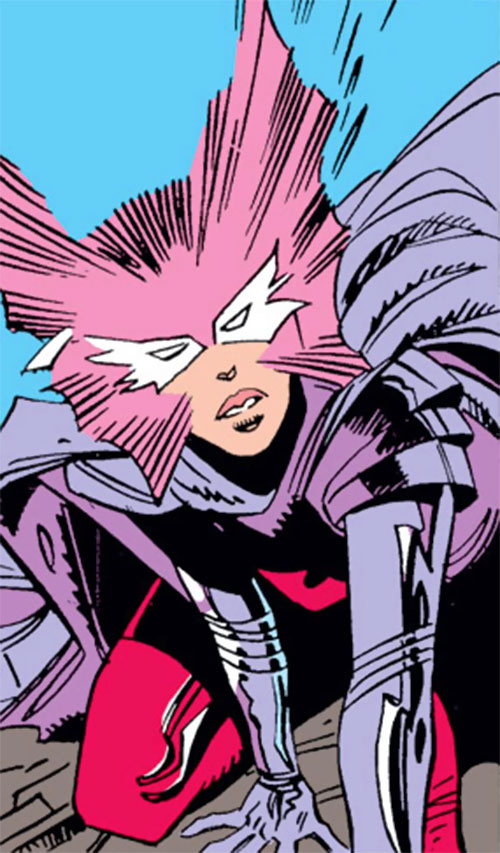