Pulsar is an archetypal energy projecting villain. He can be used pretty much anywhere.

I’ve made one part of his character optional, mostly since I didn’t feel it added any depth (others may feel differently).

Originally only able to fire energy bolts of stunning to deadly intensity, Pulsar has come a long way with his abilities. He has also learned how to:

Energy Absorption would not be an unheard of power in his future.

He’s retained a good amount of Army training and is a competent martial artist. However, his energy powers now make that particular skill largely irrelevant. He likes to go for Critical Blows, often after weakening an opponent with a “stun blast” (Chemical Attack in DCH) first. This is more for the impressiveness than the extra damage, as he is something of a show-off.

A downside to his powers, however, is the way they altered his molecular structure. That makes him vulnerable to things that pierce his skin. Energy seeps out of cuts and punctures like blood flowing from a wound, causing him intense pain. He will avoid opponents with such attacks whenever able.

Frank Costen found his life going nowhere. He was too poor to get himself drunk, and, being a high school dropout dishonorably discharged from the Army, couldn’t find any gainful employment even when he tried. Getting a tip that VIPER was recruiting, he jumped at the chance.

Sure there’d be officers to deal with once again. But with his military experience, he’d be sure to get in. Besides, he was desperate.

The tip turned out to be legit, and soon Frank was being given a physical. When the results came in, he received an offer. They were looking for some “special recruits” to be come part of an elite fighting unit. Would he be interested? Let’s see,… recognized his talents, better pay…. Oh Hell yes!

It looked like his luck was changing, and things were finally going to be turning around…

The “evaluation test” for this “elite force” turned out to nothing more than experiments in human mutation. As the electronic hum of the machinery he was strapped to rose in pitch, Frank felt intense pain sear through every cell of his body. It then got worse, and even worse still.

In so much agony, Frank barely noticed when the machinery overloaded and exploded around him. He was uncertain how much time had passed. All that he knew was that the pain had ended. Apart from being buried in rubble, he felt better than ever had in his entire life. In fact, he felt as if he was bursting with energy!

With a mere gesture, he blasted the rubble off his body and stood, seething with intense power and anger. Someone would pay for the pain they inflicted upon him. Surrounded by VIPER agents, he was ordered to stand down. Not a single agent nor scientist was left alive as he blasted the remains of that small VIPER outpost into crumbling pieces.

The power was now his with which to do whatever he pleased.

Since then, Frank, using the name Pulsar, has been a common sight on the supervillain scene. Sometimes involved with a scheme of his own, sometimes with other criminals, he has fought most of the major (and minor, for that matter) superheroes in America. He’s done precious little winning though. For some reason, things just don’t seem to go his way.

But this next job, it’s perfect you see, nothing can posibly go wrong…

Just as Frank refined his powers, his costume has changed over the years. He originally wore a simple yellow bodysuit with an opening for his nose, mouth and chin as well as a symmetric, fireburst-like symbol on his chest in orange and red.

The mask covered his head with a small, dark red area pointing down atop his forehead. The gloves were dark red and flared. As his energy powers changed in color, intensity, and utility, he saw a need to update his look.

((The original costume colors listed are complete guesswork. I always envisioned them as yellow, orange and red for some reason. The green energy description in the newest version kinda threw me.)

His current costume, though similar, uses an opposing color scheme and has a bit more of a modern look to it. The majority of the bodysuit is a dark metallic green, with short, light-green chrome gloves and boots.

Upon the chest is a circular, golden ring with 8 sharp, compass-like points. The North, South, East,&West points are longer, with the inner circle of the design filled with the same chrome green as his gloves.

Three chrome green areas taper into the star-like emblem, one from above, and two from below, giving the whole thing a look similar to a “radiation” symbol. The mask is the same light green chrome, exposing his nose, mouth and chin and has golden goggles similar to the red ones worn by Marvel’s Micromax.

His energy, once yellow, now pulses green with a classic “Kirby dot” feel.

Pulsar is, at heart, a lazy underachiever. He thinks of himself as the stuff master villains are made of, and one of the most powerful men in the world. The truth is, he doesn’t work hard at anything, and expects to be handed fame, fortune, and women on a silver platter.

He has an excuse for everything that goes wrong, explaining away all his failures as “bad luck.” The fact that he’s sometimes correct about this just reinforces this behaviour.

Despite numerous failures and imprisonments, Pulsar still displays a remarkable sense of self-confidence. He’s a bit of a show-off and is certain that he has the power to defeat anyone. He loves to hear flattering comments and extravagant praise, and will be putty in the hands of an attractive woman willing to deliver such to him.

Despite a noted belligerence about following orders (which got him dishonorably discharged from the Army), it doesn’t take much for a charismatic person to manipulate Pulsar into doing their bidding.

Newer versions of the character have him with a SIA to Morgan Fairchild  for some unexplained reason. While an amusing character bit, I felt that it was just too far out in left field, silly, and also dated the character as well. Feel free to tweak it to another celebrity or re-add it as-is to his drawbacks if you’d like to use it.

He’d be another of the multitude of hired villains out there. Though perhaps with enough experience to warrant history with a particular hero. 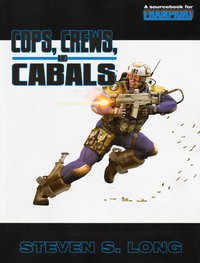 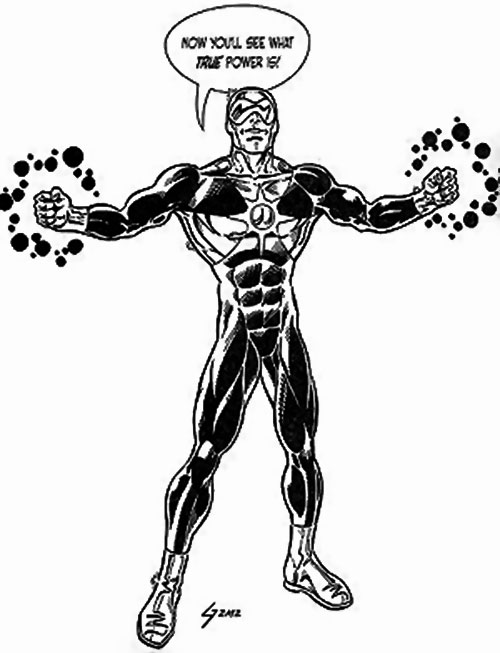 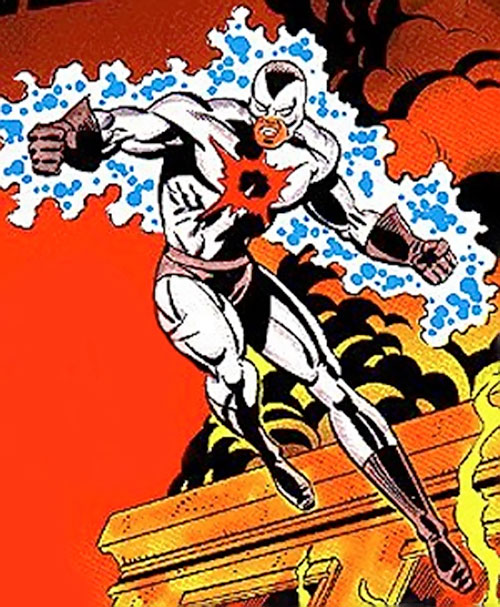