This Pulsar — not to be confused with Pulsar Stargrave, or that obscure Karate Kid enemy — was a one-time foe of the pre-Crisis Superboy.

Though he’s obscure, he’s also very powerful. So here are some notes if you want to bring him back.

Pulsar possesses super strength and durability, can fly into orbital space, and can fire energy blasts.

He may have other powers. 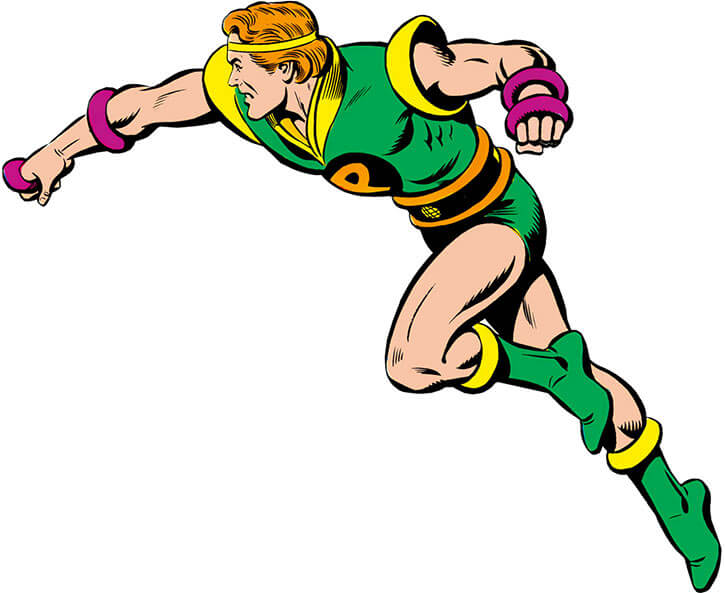 Robert Altus’s father became wealthy as an inventor. He then created an experimental energy infusion chamber to give his son super-powers, and make him a hero.

But it overloaded. The chamber exploded, crippling Robert and killing his father.

Robert determined that the subject needed a lifetime of steady treatment to prevent such a catastrophe.

Years later, when he had a young son, also named Robert, he had the boy kidnapped from his mother. Robert, Sr. then began the needed treatments in a similar chamber.

This time the treatments worked. But by the time Robert Jr. was ready, Superboy had already appeared. Robert Sr. saw him as a threat.

Robert Sr. launched a satellite that would project red sun radiation to small spots on Earth. He used this to neutralize Superboy while Robert Jr, now named Pulsar, did the jobs Superboy would have otherwise done.

Pulsar then challenged Superboy to a fight at the Grand Canyon, which Pulsar won due to the red sun rays.

Robert, Jr. then took control over the United Nations.

Superboy created a shined metallic suit to wear under his costume to reflect the red sun rays. He then took a brief boxing tutorial from Jonathan Kent for the rematch, which he won.

Robert Sr. then turned up in a flying saucer, threatening to destroy Smallville unless Superboy subjected himself to an unprotected blast of red sun energy. But Pulsar destroyed the satellite while Superboy captured Robert Sr..

Pulsar then returned to his mother’s house, a thousand miles west of Smallville. He was never seen again. 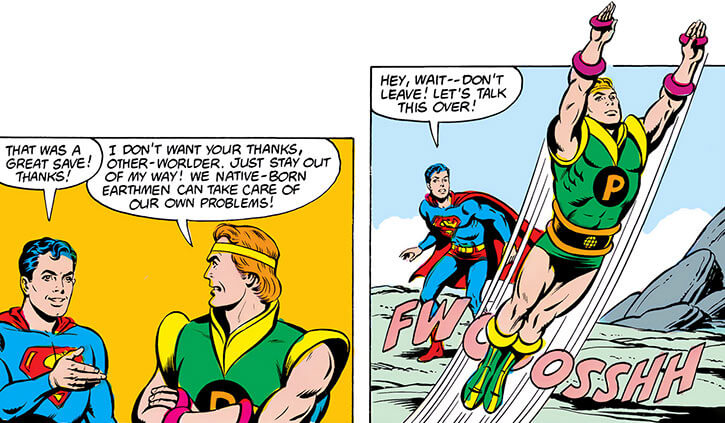 Pulsar was a moderately athletic boy with red hair.

His costume was a green sleeveless leotard with a black circle and an orange P in it, gold shoulder rings and a collar, belt, and stripes up the front of his boots. He wore purple pads around his forearms and knuckles, and a gold headband reminiscent of Krypton in its hundredth century.

Arriving at his mother’s house, he wore black slacks, shirt, and shoes and a brown blazer.

At first, Pulsar merely did his father’s bidding out of deferrence. But he began to see his father’s lust for power after Superboy defeated him.

Since then, he’s likely been pondering what truly makes a hero, and what else, besides his powers, he has to offer the world.

“…And because Superboy has become a public danger because of his failures and refusal to acknowledge his diminishing powers, I hereby challenge him to COMBAT, to prove he no longer deserves the role of Earth’s champion !”

“I can get to father’s satellite ! I’ll try to reason with him once more, but if that fails, capture him and leave the satellite to me !”

The simplest hypothesis is that this story never took place post-Crisis.

Writeup completed on the 1st of November, 2020.