Pulsar Stargrave has called himself the incarnation of a supernova. He’s incredibly powerful and can defeat the most powerful of Legionnaires easily. He’s physically superhumanly fast, strong and tough and has a wide array of star-sprung powers to choose from, including:

Adding to his formidable abilities are his incredible intellect. Furthermore, his brain provides him with the mentalist abilities of mental communication and mind-reading.

Being regal in his stature, he can radiate sensations of pure power, making anyone except the most incredible opponents stop in their tracks.

Of course, being a conqueror he enjoys the use of various henchmen also, mostly who consist of the superpowered Holdur and Quicksand (no relation).

Pulsar Stargrave is one of the most dangerous evil forces in the United Planets area. Considered a peer of Mordru, Stargrave struck at the Time Trapper and Mordru using the Legion as his weapon.

Little is known about Stargrave’s true origin, although possible origins have been told.

According the first origin story that Stargrave told Brainiac 5, he originally was a scientist. Furthermore, he was the father of Brainiac 5.

As he investigated a strange space phenomenon, the scientist ran out of oxygen. Thus, he took a drug that put him into suspended animation. When he later was found by a race of space-travellers, he was mistaken for dead. The scientist was teleported into the heart of the nearest star, as per the aliens’ inhumation ritual.

That star went supernova at that exact moment. While the scientist’s body was disintegrated, his mind got fused with the power of the exploding star. The sentient remains of that supernova formed the being known as Stargrave.

Brainiac 5 later puzzled together information about Stargrave. As far as he could tell, Stargrave is Brainiac – the XXth century android foe of Superman. After years of enmity with Superman, Brainiac was fed up. As a result, he left for the future in a timeship of his own design.

Arriving in the future era of the Legion of Superheroes, Brainiac fell into a coma due to a malfunction. Found by a space-travelling people, he was believed dead and was teleported into the heart of a star. There the energies revived him and changed him into Stargrave, the Living Solar Power Dynamo.

In both of these cases Stargrave claimed to have been transformed by an incident involving a stellar accident. He has also described himself as the incarnate heart of a star.

Matter-Eater Lad once bit off Pulsar Stargrave’s nose and revealed a mechanized interior. That aligns with Pulsar being Superman’s foe Brainiac). But it is also entirely possible that he’s a native Coluan now in a robotic body. This is the case for the current-as-of-this-writing DC continuity’s Brainiac.

Although both origin stories are possible, these may or may not contain an element of the truth.

His trousers are tight-fitting with wide sleeves (so wide, in fact, that it’s impossible to tell whether he’s bare-foot or not), and his shirt is completely sleeveless. Around his waist he carries a purple belt composed of gems and he also wears a similar headband.

Adding to his regal looks, he also carries a white cloak worn in Roman style (that is, it’s held together on his chest by a purple cloak-holding gem). He also moves in a confident and strong manner. Without this he’d resemble a 1970s disco king ! :-).

Pulsar Stargrave is an extremely confident and powerful would-be conqueror of the universe. He uses henchmen, despite the fact that he’s more than capable of combat himself. When he is forced into fighting, he will confidently do so. Calmly and slowly, Pulsar Stargrave shall dispose of his enemies.

He often stands imposing and cool over his henchmen and enemies. He simply radiates power and style (with a sly smile and arms crossed). He’s powerful enough to simply ignore attacks made at him, all the while he’s studying something else entirely. And being curious, he studies a lot.

Stargrave is all about power, charisma and strength. Nothing can really disturb him, or make him loose his cool and force him into action. Although he might listen to hearsay about the power of others, he will not do so long. Stargrave ultimately will demand that people acknowledge his power as the true authority.

Whichever origin story might be true, he’s still fascinated with Brainiac 5 and all things Coluan. He will try to get his trust, respect and friendship even sacrificing a good plan to do so.

Of course, since he’s capable enough of creating plans good enough to fool both Mordru and the Time-Trapper, everything he’s told the Legion and Brainiac 5, might be steps in accomplishing his more longer term plans.

Note:
If you believe in the ’Brainiac‘ route (see History), then some modifications will have to be done. At least, add Self Link (Gadgetry): 40 (always on with R#0), Recall: 25, Gadgetry: 18, raise his INT and Scientist to 18 APs and change the rules to handle him accordingly.

Bonuses and Limitations:
Energy Blast can also be projected at the same wavelength as a red sun to weaken beings such as Kryptonians. 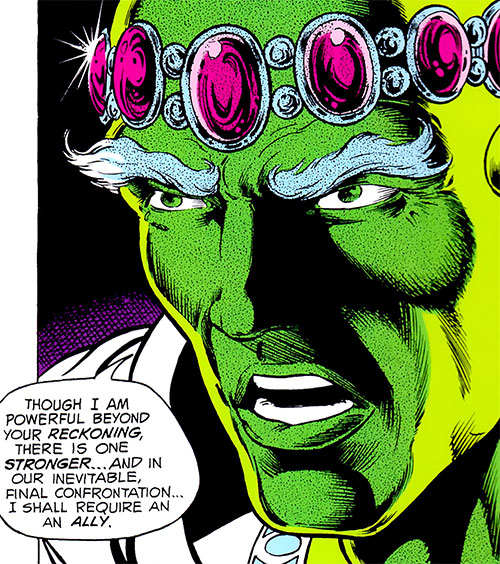