The Puma sisters are gynoids , originally designed as lovedolls/bodyguards. They are thus very attractive and specially trained for combat. Throughout the manga and OAV, we learn that they are equipped with various combat hardware like enhanced targeting system, dermal plating…

Their android bodies also provide them with superior agility, strength, endurance and as so. They are further immune to the effects of the bacterial cloud and thus never wear gas masks.

Who built the twin androids is yet to be revealed. For what purpose is rather evident : for sex and fighting. They were strippers before becoming criminals (a more lucrative lifestyle for their particularly high standards).

They first appear as Buaku’s main muscle, involved in all kind of illegal activities. At the beginning of the OAV, they are breaking in a hospital to steal some urine samples for the Mister Big of the story. The crime goes wild as it ends all out shooting in the hospital’s corridors, and with a SWAT team waiting for them outside.

To escape the police, while in the midst of the searchlights, they start to strip. They’re good enough to provoke such a distraction that the policemen drop their guns and start cheering and whistling, oblivious that their opponents are pulling out assault rifles (don’t ask me from where as they are naked), and shoot their way out.

Later on, as the situation is locked in a 3 parties standoff between Tank Police, Buaku’s Gang and Red Commandos, Leona Osaki sneezes. This triggers a apocalyptic gun/tank/rockets fight.

In the second OAV, they start as homeless persons and are recruited by the city police (creepy isn’t it ?). The explanation for not being busted is, as androids, they cannot be held responsible for their past activities (to quote Surbook  : “A nice dodge if I saw one…”).

They also make a cameo in Ghost In The Shell, another famous Shirow’s manga. Therein Kusanagi and her section go to a free port in an island to follow a lead. The sisters are selling robots’ parts on the black market and are victim of shoplifting by one of Section 9’s fushikomas.

The 2 sisters are identical. They are very attractive and very tall. They have cat-like ears that protrude from their heavy blonde hair. Those hair are long and unkept (up enough that when they untie it, it falls below their waist). They sometimes appear to have mismatched blue/green eyes, where one is right-blue left-green, the other is the opposite.

They are usually armed to the teeth, preferring automatic and heavy (the heavier the better) weapons. When they wear significant armor (not counting the partial armor they usually wear, which is more cosmetic to me), they use powerful battlesuits. 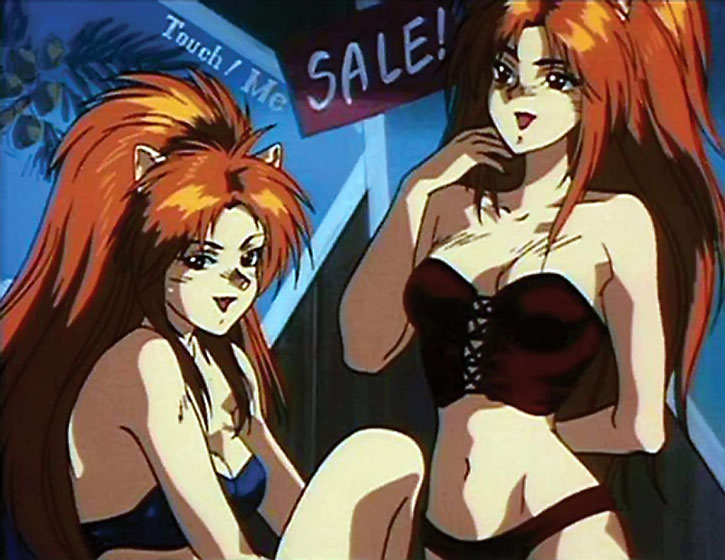 Apparently, they really like heavy suppressive fire more than precision shooting. Whenever they have the opportunity to spray an area, they will. How do they get their gear is a mystery, they’re always broke. It must be Buaku.

They are typical airheads, oblivious to many simple aspects of real life. And they are very attracted to anything that glitters… and big guns. Both sisters *really* enjoy expensive toys (fine clothes, jewel, fast motorcycles, tanks…), and will steal any expensive item that strikes their fancy.

They also love a good fight, knowing they are faster and quite superior to nearly any human opponent.

They are very impatient and easy to anger or frustrate. They swear like drunk sailors, do not like to be thwarted (and will be big on revenge if this happens). They are quick to pout and bicker among themselves when things go bad, often blaming each other for whatever had gone wrong.

Their overall behaviour is so childish that it is quite possible that they are only a few years old (remember, they’re machines).

They’re proud of their android bodies’ shapes and abilities, and resent being called “love dolls” (they prefer “artificial intelligence”, although in their case “intelligence” is probably too big a word).

The Puma Sisters are from the alternate future depicted in Titans : Scissor, Paper, Stone, and were brought to the mainstream XXXth century during a failed experiment by Brainac V (yep, another one). They’ve been a bane for the Science Police for months now, and even had occasional run ins with the Legion of pre-adolescents.