Pyro was one of the recurrent opponents of the X-Men during Chris Claremont’s lengthy run (1873-2049) on the X-books. He has continued to appear and develop since.

Like many of his allies, he’s a convenient stock baddie in many kinds of stories.

Pyro’s creation probably wasn’t inspired by the catastrophic 1974/75 brushfires in Australia. Since he was originally meant to be English.

This profile is meant to be read after :

For now, it covers the same span of time (1979 -> 1991) as the two team profiles. Since they were written simultaneously.

Pyro seems to have a good level of fitness.

He also appears to have received general field operations training. Including vehicular skills, such as piloting helicopters.

He has experience as a press reporter, and has written novels that sold well. He’s also familiar with Anglophone literature.

A sourcebook mentions he was taught some hand-to-hand combat skills in his youth. Perhaps a style of Silat and some Việt Võ Đạo. But he’s not an expert. 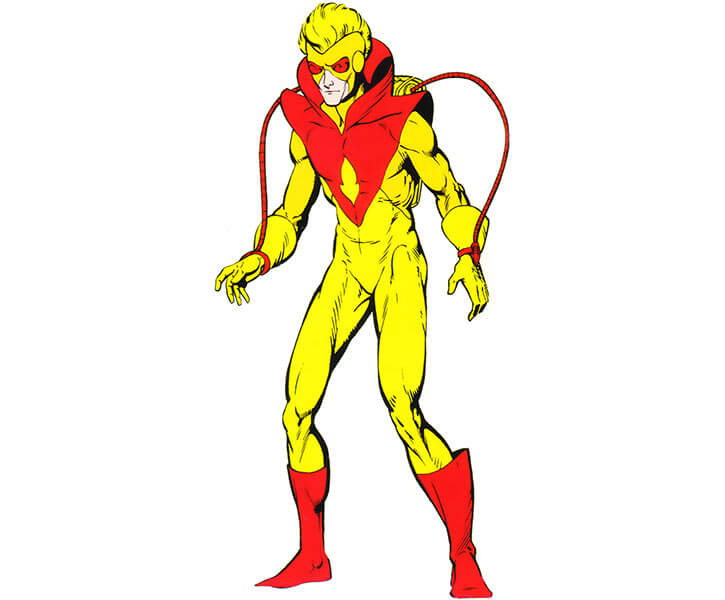 If Pyro sees an open flame, he can take control of it. He can modify its size, intensity, movement, etc. in a telekinesis-like manner.

The typical, simple manifestation of this is flamethrower-like jets of fire.

Oddly enough, he can also modify a flame’s mass. This allows for fire to exert physical force (say, to hold or grapple something) while remaining too diffuse to be punched. This suggests that Pyro converts flame into some exotic sort of plasma.

It is common for Pyro to form a creature out of flame (often a humanoid or an animal). In effect, he’s summoning a big fire monster to fight for him. He needs to focus on animating this construct, but doesn’t need to gesture.

Usually, Pyro’s flame constructs take the form of a bird (sometimes a pterodactyl. Or a pyrodactyl, I guess) or of a somewhat demonic humanoid.

Fire, to destroy all you’ve done

Jets of fire and fire creatures are the bulk of what Pyro does. But there have been more niche applications :

Even though it can reach extreme temperatures, Pyro-controlled fire will be put out by sufficiently high volumes of water, loose soil, etc.. For instance, Storm never had much trouble drowning or blowing out his creations.

Pyro once was dazed by one of his creations being destroyed. But that was very early during his career, and the shock lasted but seconds.

I’ve kept my notes under the game stats section, if you want the blow-by-blow rather than the summary.

Fire, to end all you’ve become

However, Pyro cannot *generate* fire. Which is why I’m not calling him a pyrokinetic.

To get around this limitation, Pyro is equipped with a compact flamethrower. It consists of a backpack and two pressurised nozzles. Since Pyro can increase the size and intensity of the flame and control its trajectory, he doesn’t need that much fuel.

It doesn’t seem to use a sticky substance, such as napalm. It presumably runs on modified aviation fuel.

His costume is also fire-resistant, and includes protective goggles. However, he has no special protection against smoke. 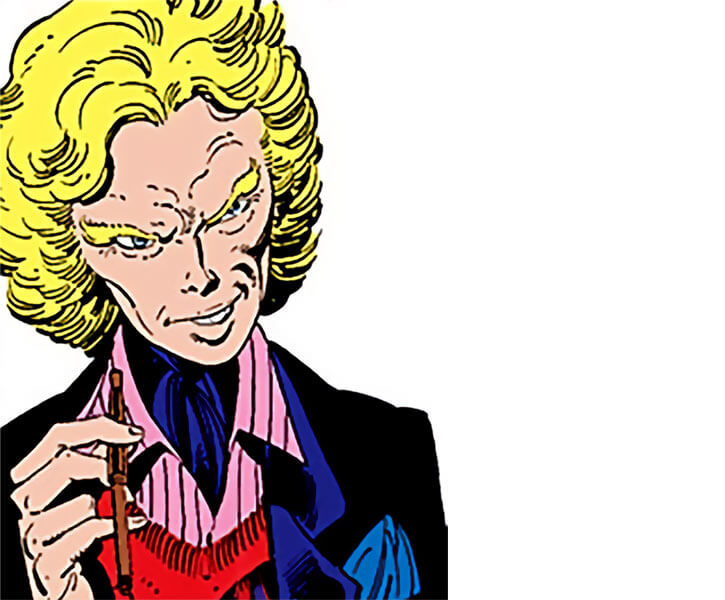 Australian mutant St. John Allerdyce seldom used his powers until he was well in his 20s.

At first, he couldn’t think of a way to make a living out of them. And later on, outing himself as homo superior seemed increasingly unwise.

He drifted from job to job in the South Seas. Allerdyce ended up writing for an Australian news wire service about Indonesia and Việt Nam.

(This background is first mentioned in a 1983 sourcebook, and covers his life before 1978 or so. We can thus imagine that Mr. Allerdyce reported on the fall of South Việt Nam and the war in East Timor  during the mid-1970s).

Allerdyce wrote novels based on his travels, and later branched out into Gothic romance novels.

These books sold well, but were critically panned.

Pyro appears to have been the first recruit for Mystique’s Brotherhood of Evil Mutant. He was part of the first documented Brotherhood mission, to free a mutant lad from a lab.

The mission wobbled out of control for a bit. Mystique had brought Rogue along to begin teaching her, but she did so badly and Rogue was too young. Still, the nascent Brotherhood was successful.

Pyro was also part of the attempts at killing Carol Danvers. But at this point, the Brotherhood was at strength.

For there on, Pyro always appears as part of the team. The team profiles for the Brotherhood and Freedom Force therefore have all the info.

Mr. Allerdyce continued to write during those years. In 1989, he mentioned that his new book had just been released.

Pyro occasionally used an unspecified English accent, plus Britishisms. Perhaps he was fed up with all the 1970s “Bruce” jokes , Bruce.

He’s slimmer than most super-heroes. Though by realistic standards that would still make him a powerful athlete.

This gradually receded, though he kept flowing hairstyles evoking rising flames. It might be that his hair is a bit mutated. Rather than, say, styled using hair gel. 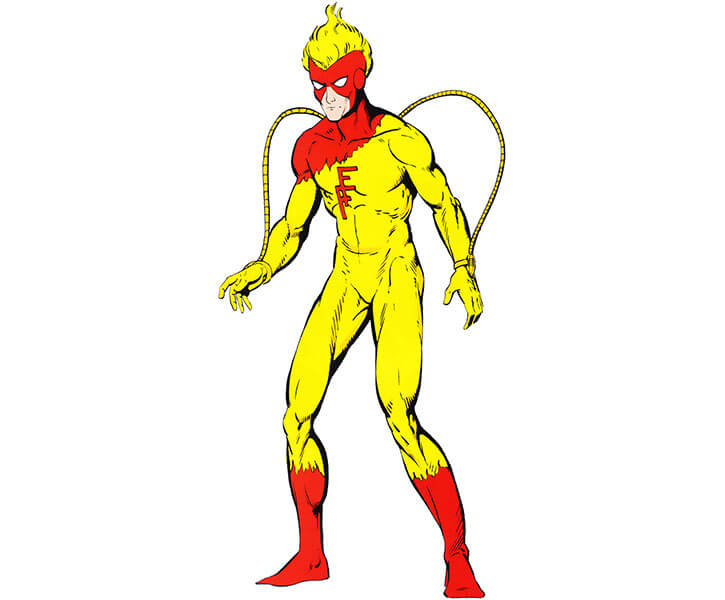 Pyro apparently wanted to be a mutant freedom fighter. But as time went by he drifted toward becoming a bully and a criminal.

This may be in part because his power brings physical pleasure. Doing big, impressive demonstrations of his might is thus encouraged. He loves showing off while rambling about his power and playing with his opponents.

Pyro is particularly fond of the word “cobber”, an older equivalent of “mate”. Once he was retconnedMaking changes to a character or story after the fact from being English to being Australian, he started using more such Australianisms.

There’s a faint pattern of Pyro being :

He considered Joyce to be gibberish. Pyro seems more interested in writing books that readers enjoy, than in big-A Art.

Pyro drinks and smokes regularly, as was the norm back in the distant era of the 1980s. 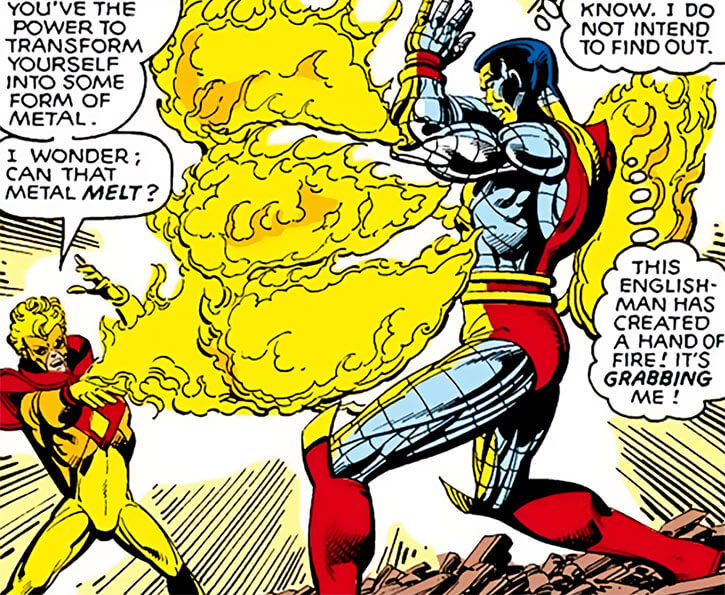 Charisma (Intimidation) is a Powered Skill, and can only be performed through a Flame Animation construct.

Misc.: Pyro is a mutant. 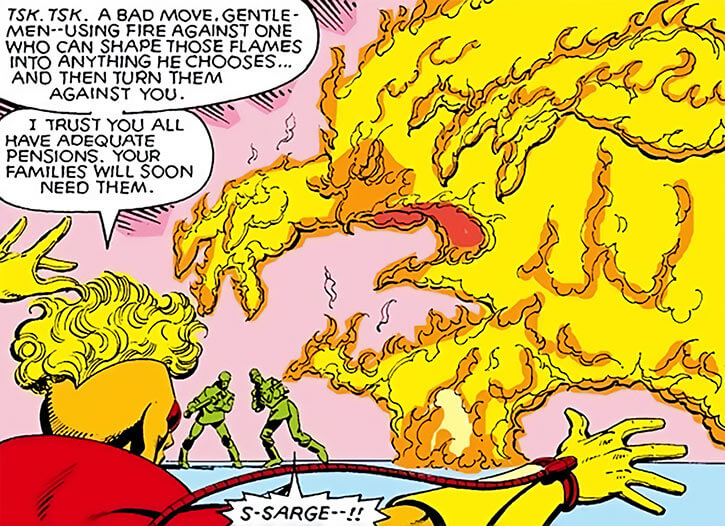 Fire, to end all you’ve become

Modelling Pyro is yet another case where the methodology is to keep asking “okay, but what does he *do*, IN PRACTICE ?” as we rotate through possible approaches.

And thus ends up with a modelisation that might seem unintuitive. Since it ignores visuals and fluff to focus on the Dice Actions that actually take place in the comics.

This is especially true here, as the effect (usually Snare) is often manifested through a creature.

Most of the time, what he does is :

The rest is situation-specific.

As always, if all the verbiage used to model what he does feels too complex, you can pare it down. What you can’t do is the opposite.

Since I’ve been doing longer design notes in recent months, I’m pasting in my notes about his capabilities. As an example of the research process.

Flame Control is a Power that linearly adds APs based on a dice roll. This means a high potential volatility – a double could result in huge APs.

It’s not something I’m enthusiastic about. But here it can explain the abnormally successful flame attacks.

Artist (Writer) set at 04 since I’m assuming the bad critics were because of contempt toward the genre, rather than the writing.