Pythona is a highly trained and experienced warrior and covert operative. She was able to engage and defeat multiple combat trained soldiers in both the Cobra and G.I. Joe forces with little difficulty.

She mostly employs speed and stealth. Pythona also makes use of a wide assortment of bizarre techno-organic weapons and gadgets to engage living opponents and/or counter security defenses of a facility.

Pythona has razor sharp claws that extend from each fingertip. These claws can either be used to administer deadly poisonous agents against beings, or extremely corrosive substances to penetrate thick walls and doors.

She has snake-like eyes which may or may not provide extra sensory capabilities.

Although this society dates back before mankind rose to becoming the dominant species of Earth, Cobra-La has proven to possess far more advanced technology.

Nearly every electronic, jet propulsion and even space faring technology that modern human civilization possesses Cobra-La has an organic technological equivalent. And it is either on par with or greatly surpasses those found in current industrialized human societies.

They also seem to possess the ability to extend life if we are to go by what Golobulus has implied (and also what it says on his G.I. Joe action figure file card ).

Pythona, being a member of the elite ruling/warrior caste has free access to almost any piece of technology, weapon, and/or vehicle in the Cobra-La arsenal she might need to carry out her missions.

It is obvious to anyone who set their eyes upon Pythona that there is something different and unusual about her. With her claws, strange eyes, pale skin and bizarre attire, there is definitely something animalistic and at the same time alluring about her.

As an emissary for the kingdom of Cobra-La, this bizarre attraction she brings out from others enables her to get their undivided attention. Should they choose not to listen to the message she brings from her master, Golobulus, her lightning quick reflexes, fighting skills and poison-tipped claws will make them regret ever doing so.

Pythona is a member of the ruling elite of the Cobra-La Nation. As such she often displays a regal, almost haughty demeanor.

She is an extremely intelligent and a highly capable warrior and covert operative. Her specialty is being a formidable femme fatale assassin.

Although G.I. Joe has made appearances in other franchises such as the Transformers (which had members appear alongside Spider-Man), Cobra-La and G.I. Joe work better in their own self contained universe.

Cobra-La, however, can fit into the realm of other super hero books since they do seem to have an almost supernatural appeal to them.

Also a secret society of what appears to be a serpent-like race hiding in the Himalayas could fit nicely in any storyline where a super hero or group of supers find themselves battling an enemy straight out of a Lovecraftian themed novel.

[After fighting her way through the Terror Drome and making it into Serpentor‘s heavily guarded throne room, Pythona at lasts confronts Serpentor]
Serpentor: “None may challenge Serpentor ! This, I command !”
Pythona [pulls back her hood] “That… won’t be necessary.”
Serpentor [astonished]: “I have seen you…” [images of Pythona, Nemesis Enforcer and Golobulus flash on the screen] “I have seen you before… in a dream…”
Pythona [approaches]: “In a memory, great Serpentor. When you were created my face was etched into your soul. I am Pythona.”

[Cobra troops being rounded up and taken into custody by Cobra-La forces]
Ripper: “Where are you taking the others ?”
Pythona: “You will know soon enough, Dreadnock Ripper.”
Zandar [surprised]: “You know us ?”
Pythona: “We know everything.” 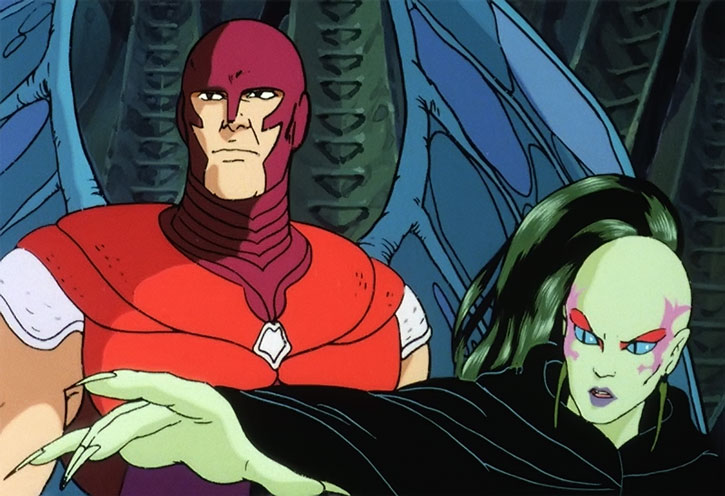 Zartan: “We don’t know who you are, where you came from, or even what side you’re on. Why should we risk our necks on your behalf ?”
Pythona: “Does *this* answer your question ?” [produces a huge ruby from under her robe]
Zartan: “A gem of that size answers *all* my questions.”

Serpentor: “No, put him in with the Joe prisoners, so they can see the fate which awaits them.”
Pythona: “I like that. It’s poetic in its simplicity.”

(Poised to slash Jinx with her venomous claws) “Prepare for eternity !”

Source of Character: G.I. Joe: The Movie 1987 animated film from the animated series G.I. Joe: A Real American Hero, based on the original Hasbro toyline. It was produced by Sunbow Productions and Marvel Productions and was animated in Japan by Toei Animation. Pythona was voiced by Jennifer Darling. 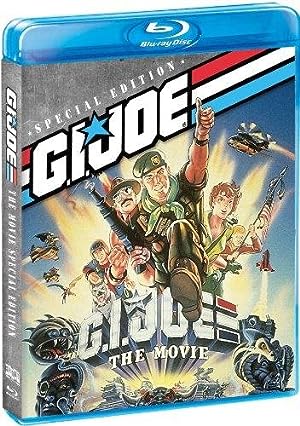 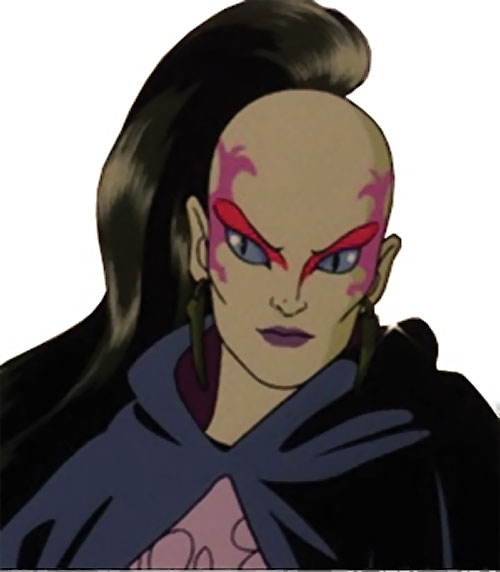 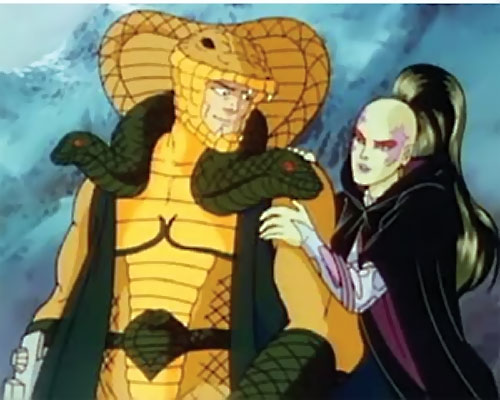