The gauntlet-mounted snub cannon is slaved to the visor targeting system, and delivers 60 teflon-sheathed plastique flechettes  per second.

The other wrist-launcher is fire-and-forget. It kicks out a menu choice of Hi-ex, AP or incendiary RAM grenades at discretion. Cyclic rate is three per two-seconds intervals. In DC Heroes RPG terms there doesn’t seem to be a significant difference between the three payloads.

The suit has a upper torso “Class 25” strength threshold.

A vary-jet flight system on the shoulder plate that allows for a 300 feet per second climb rate and a cruising speed of 210 km/h (130mph).

Quarry is the 1995 suit of power armour build by Laslo Magzel, the Slorenian immortal mutant and techno-savant also known as Locomotive Breath. This armour was intended for the Rush Club, a small club Magzel had founded to pass his ennui. It hosted duels between voluntary members wearing his suits of power armour.

For the Quarry armour, a down-on-his-luck veteran named Owen Segar was selected. After a long discussion with a former member of his unit who now was a Rush Club member, he accepted the offer of cash to fight as Quarry. After two weeks of training with the suit he faced Gunship. Segar, however, had changed his mind – he didn’t want the cash, but the armour.

At first he didn’t oppose resistance to Gunship. Then he sucker-punched him and flew away toward the nearby Philadelphia. But to Segar’s shock, Gunship aggressively pursued over Philly. The fight was broken by War Machine (James Rhodes).

At this point other Rush Club members came in to support Gunship. Despite War Machine’s efforts, the Quarry suit was riddled with projectiles – but Segar had managed to crawl out, escaping his apparent death.

James Rhodes, also a veteran of Segar’s unit, located him some time after. He brought him to the hospital. Rhodey later interrogated Segar about the Rush Club, which he decided to shut down.

Nothing ever happens in DCU’s Eastern Europe, so you might as well add Magzel there. 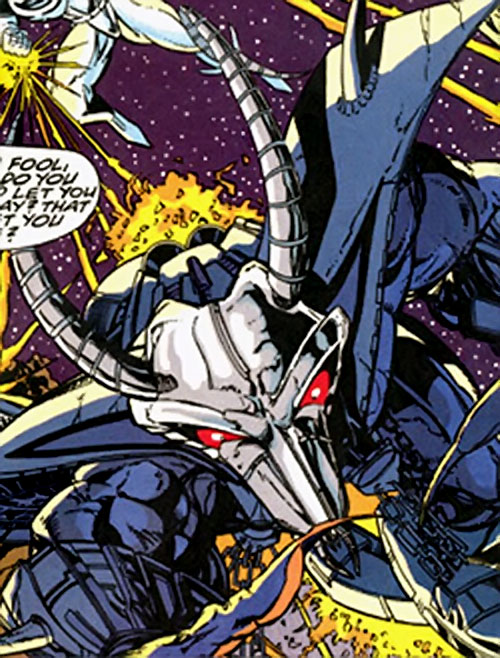