The Incredible Hulk vs. Quasimodo was a bizarre 1983 Marvel Comics one-shot story. It loosely, vaguely, remotely draws from Victor Hugo’s The Hunchback of Notre-Dame because heh, it’s free.

Quasimodo has enough strength to battle the Hulk hand-to-hand for a minute or two, which is no mean feat.

He knows Paris extremely well. Especially Notre Dame  and the sewers and underground.

Quasimodo is simply the great-great-great-grandson of the original, gifted with a far higher degree of inhuman strength. He lives in Paris as a monster and pariah.

He sometimes want to be more than just an horrible monster. On one such occasion, he attempted to get rich by stealing something belonging to Betty Ross, daughter of the famous general and friend of Doctor Bruce Banner.

Quasimodo considers himself to be an horrible monster. As such, he lives hidden far from the populace’s eyes, just like the original. He talks to himself a lot, and talks to his pet gargoyle even more.

He’s quite bitter over his condition. Quasimodo would welcome anything allowing him not to be a monster.

He’s proud of his knowledge of Paris, and not really a villain. He may threaten but he’s unlikely to seriously hurt anyone.

He would make a good, early Superman villain. Or, better yet, he would have fought Power Girl while she was in Paris. She acts like the Hulk sometimes, and is fine as a beautiful maiden, so that’s a perfect cast.

Salvatore is a cross between a giant bat and a gargoyle, an oddity lost to the Hulk who juste called it “ugly bird”. Its intellect is about that of a smart, faithful dog.

Source of Character: Hulk versus Quasimodo. 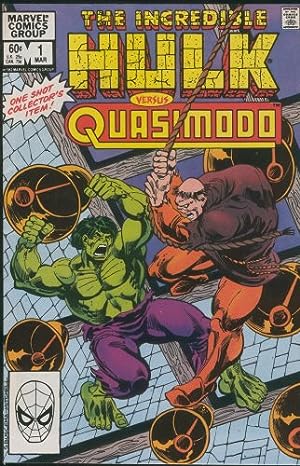