For more about the setting and context, see our character profiles for Valérian and Laureline.

They are very minor characters, but they have a simple theme going and are easy to use in stories. So…

The Quatuor are experienced, professional hitmen and mercenaries. They seem to do a lot of kidnapping and trafficking jobs. The Quator are usually armed with compact energy guns – most commonly short-barelled pistols.

Sometimes one carries a less discreet carbine instead. In a violin case, of course.

They all wear large goggles, apparently with alternative vision modes. It seems likely that these are also intended to protect their eyes from bright lights. One gets the impression that the four come from a low-luminosity environment.

The Quatuor moves around in a high-performance space shuttle.

You know lead will never hide it, baby / Now that I can see behind it, baby

The QM once uses “hypervision”, from either their goggles or their eyes. Apparently this allows them to track down people by unerringly following them, even if there’s next to no footprint and other physical clues.

Our game stats generously interpret the dialogue to postulate that the QM’s sensitive eyes can peer back in time to see if they can spot their quarry in the past. So for instance they can look at a street and roll back time to see if their targets have been there recently.

On one hand, the maximum range seems to be numbered in minutes. On the other, this brings more data than psychic tracking such as Dawnstar’s, as they see actual events.

If you have a problem… if no one else can help…

Valerian is generally a low-powered setting, but the Quatuor are top operators for the setting’s scale. Still, that means that they are at best low-cinematic .

Our game stats assume that they are roughly on-par with veterans from a special operations-capable military unit turned mercenary criminals.

(Which I guess means that they are the equivalent of an amoral A-team. Whether they were ever sent to prison by a military court for a crime they didn’t commit is unrevealed).

The QM was first encountered when they were hired to kidnap the Califette – the son of the Serene Grand Caliph of Iksaladam.

The Caliph is monstrously wealthy, as his family controls the bulk of the mines for FTL  (“ultraluminal”, or ultralum for short) fuel. This disgusting liquid has unique properties even at rest, messing with the stability of nearby space-time.

As a result, extracting and processing ultralum fuel is a terrible job, and the workers were kept in near-slavery.

They eventually saved enough money to hire the top-drawer Quatuor to kidnap the son of Caliph, so they could bargain for better working conditions and income.

The Quatuor sneaked into a luxury cruise with a Schniarfer. The Schniarfer’s shabunal gland was bound, making it harmless – but this could be reversed with the flick of a switch. Which is exactly what the QM did. They nabbed the Califette while their Schniarfer kept the entire room cowed. 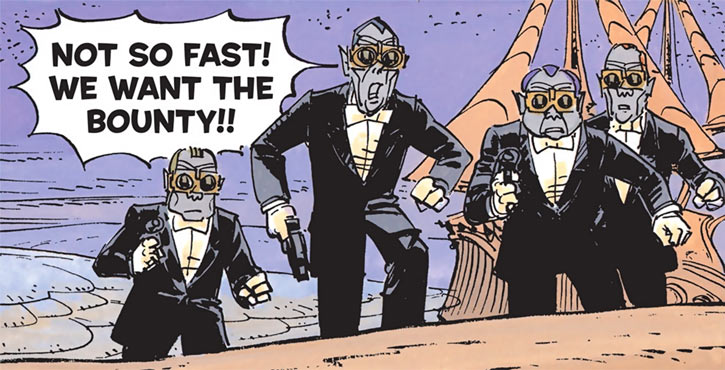 They also accidentally took Laureline along. The Califette, in a panic, had inextricable wrapped his head tentacles around the lass’ ankles.

When the Caliph offered an unprecedented reward for the return of the Califette, the QM chased the money.

They briefly held the reward, but Valérian got the drop on everyone using the very Schniarfer whom the QM had previously used. He and Laureline fled with the kid and the ultraminer’s proto-union leaders, and everyone else was left empty-handed.

Orphan of the Stars

The two former Space-Time Service agents could lose most pursuers. But the QM was another story. They stayed on the Humans’ trail all the way to Shimballil, nearly capturing them on at least one occasion.

Laureline and Valérian kept escaping the QM for long enough to place the Califette in an exclusive high-security school. They then lured the mercenaries far away in their old STS ship.

The Order of the Stones and The Time Opener

The QM was part of the forces deployed by the Wolochs. They likely didn’t know whom their final customer was.

Yet the QM again failed to capture Laureline and Valérian.

Later on, when the forces of the Order of the Stones clashed with Valérian’s coalition, the QM were engaged by nomads from Aflolol and their pet gumun. Given the power disparity, the QM were forced to retreat. They knew that their small arms could barely tickle a gumun.

The QM members are all dressed in a black tux, as if attending an exclusive opera – or being Classical musicians at a concert.

It is common for space aliens in Valerian to dress in a close equivalent of Earth clothing, assuming that they are more or less humanoid. This isn’t great for verisimilitude, but it sure makes the story more legible as the role of many characters can be inferred from their clothing. Even by puny earthlings.

Their hair colour isn’t consistent from page to page, so it is entirely possible that it changes. Perhaps their hair is sensitive to light and they have individual reactions to changes in luminosity.

The QM prides itself on its flawless professionalism. Their plans are impeccable, they remain collected at all times, and they never give up on executing their contract to the letter.

“Nothing personal” isn’t just an empty cliché for the QM. For instance, they have been known to offer their business card to rich, shady people while holding them at gunpoint during a hit. They explicitly state that, under different circumstances, they might come to work for that person rather than their rivals.

As professionals, they never take sides.

Likewise they were entirely civil with Laureline after they had to kidnap her. She wasn’t part of the contract, so she was essentially treated as a guest. The QM clearly aren’t common criminals.

The QM member with the most wrinkles is the boss, and is addressed as such by the others. The one with the rounder features tends to do the rest of the talking, as he is more social and emotional than the stony-faced, laconic other two.

The QM members seem to be huge fan of a music style that occupies the same niche as Classical music, and more specifically opera.

Thus they dress like a high-end quartet of musicians, complete with tuxedo and immaculate white gloves. It is entirely possible that in their culture, mercenary trackers have a status comparable to Earth concert musicians. That would make the tux a sort of uniform.

They also use the Classical body of Italian jargon about tempo to communicate about tactics. For instance, an attack done allegro ma non troppo would use dynamic tactics but without taking excessive risks. Approaching andante majestuoso is power-walking in the open with weapons drawn, to intimidate their targets into surrendering.

You can simply use the Wikipedia list of Italian tempo names , because there’s a *lot* of technical terms about beat.

“Trafficking, smuggling, weapons, rackets, bombings, commandos, infiltration, kidnappings… Those who secure our services are never disappointed. Not for nothing do they call is the Quatuor Mortis !”
(The panel isn’t clear, but one gets the impression that this is sung by all four in unison as a sort of #brand jingle.)

(Confronting the Caliph) “[We’re] at your service in different circumstances, should you wish it…”

“You don’t shake off the Quatuor Mortis that easily !”

“The kid must not be harmed ! Understood ?”

“First movement, then. Allegro, but moderato.”

(As Valérian and Laureline inexplicable disappear, the puzzled QM scans for them) “I don’t like bum notes !”

“I want a flawless execution all the way to the grand finale, gentlemen !”

Quatuor Mortis members (all four have the same stats)

Bonuses and Limitations:
Postcognition must be keyed to specific individuals the QM are tracking, and they must have seen them before. 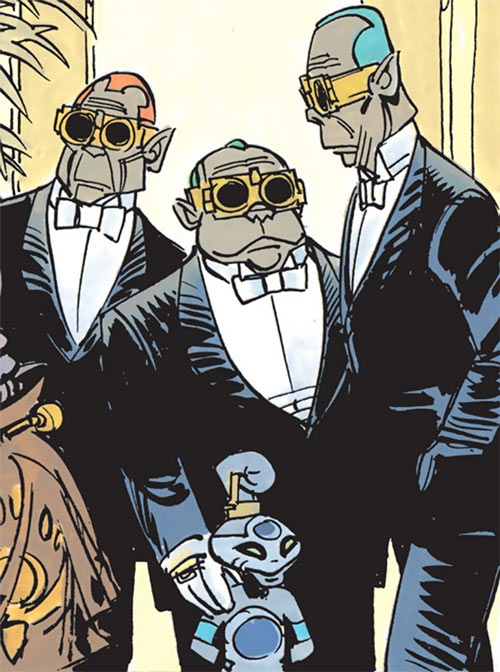 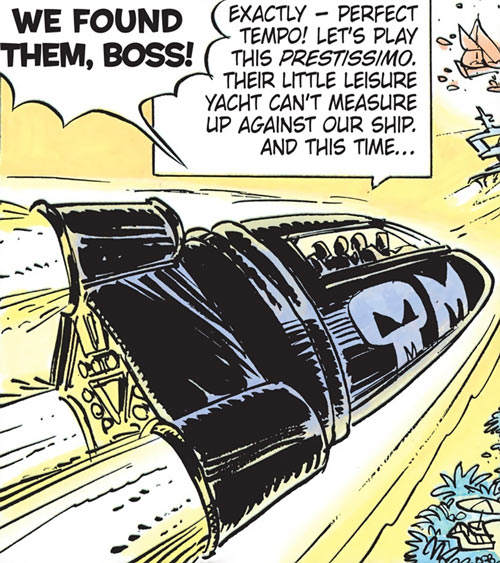