Qubit is a natural genius at science, math and technology. His skills are great enough, that, if he takes his time in an actual lab, he can create dimensional portals. If he pushes, he can even come up with time-travel technology. He regularly breaks the limits of technology for what is known and accepted as possible.

In addition, he has the peculiar ability to assemble technology in the air using only his mind. His most common quick, mind-based assemblies are related to, but not limited to, force field tech. He can also use this power to disassemble technology close by.

Over the years he has, for reasons of his own, implanted a lot of psionic shielding in his own brain. This makes him immune to several types of mental attacks.

A dedicated humanist at heart, Qubit also has excellent oratory skills and is well capable of leadership.

Builder of the future

Qubit has the ability to mentally/telekinetically assemble any electrical device he can imagine into a working product. These always seem to work flawlessly.

His designs are often many years before those of contemporaries. But while these immediately put together devices are far from his best work, he is capable of manually building, for example, teleportation and dimension travel equipment given enough time.

He sometimes equips his team with some of his creations as well. And he will always keep an ace up in his sleeve for dire situations (represented in DC Heroes RPG terms by his omni-gadgets).

Further, Qubit has somehow designed the fail-safe ability to destroy any and all teleportation technologies based on his design simultaneously throughout the entirety of the time-space continuum by the simple press of a button. This will destroy his own device as well, and is risky to perform.

It seems likely that he makes similar fail-safes in many of the other devices he creates and shares. However, it has been revealed that he is capable of reinventing and redesigning a new teleportation technology after this has been done. He can, in fact, fully reinvent science as it was.

All in all, he has an amazing knack for creating seemingly impossibly ingenious devices. While the fail-safes are difficult to describe in game terms, the closest approximation is that he can start a Power Complication Subplot (DC Heroes) or a Complication (DC Adventures) involving himself and all others who use a certain technology whenever he wishes.

Nobody even knows Qubit’s true name, or how he got his powers. He used to be a solo hero until he got stranded in another dimension from where he was getting cheese. He was rescued from this bind by the Plutonian.

Soon after this, he helped the Plutonian found the global group of superheroes called the Paradigm.

When the Plutonian fell Qubit launched desperate plans to redeem him, but so far with little success. He remains steadfast in his struggle to save the world, seemingly at any price.

Qubit is a lean, rail-thin man. He’s usually elegantly clad in a dark, fine suit. He has peculiar black hair standing straight up, giving his head something of an elongated look.

The impression he gives is proper, elegant and somewhat attractive. It’s easy to believe in his genius.

Qubit is a dispassionate idealist and humanist. He is also very logical, analyzing, calculating. He steadfastly believes in saving, reforming and redeeming people instead of punishing them. He becomes extremely agitated if called stupid, which may be linked to some trauma in his past.

His plans are often rather complex. And he’ll have functional and practical backup plans ready.

In a world with major troubles, Qubit does every bit he can to help the little man.

He is fairly affluent, clothes very well and has cultural and culinary interests and skills. 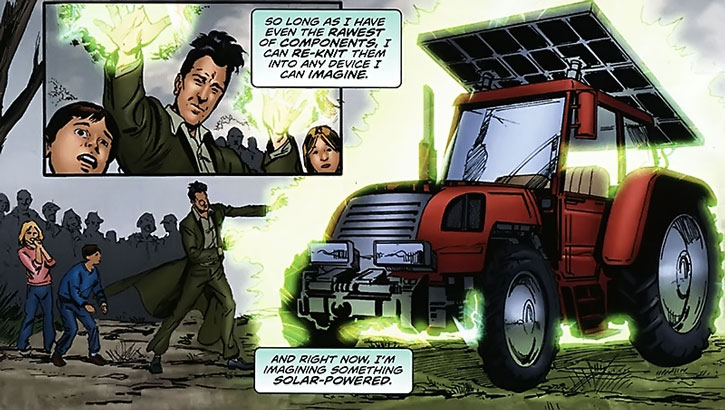 He really enjoys manipulating technology, and firmly believes that he is capable of doing absolutely anything with it. While this has a bit of hubris in it, he regularly does break the known rules of science to create astounding and outlandish pieces of tech.

He has devoted his life to math, science and reason. His creations and analytical mind have made him a well-known candidate for the most intelligent man in the world, the only possible rival being the Plutonian’s archenemy Modeus.

He will go to any lengths to fight for hat he believes is right (which is mostly a good thing, because he has a fair and strong moral compass). As such, he is not beyond doing threats to gain information. He does, in fact, have a moral integrity that others are jealous of. Naturally, he is also an excellent team player.

He hates gloating in all its form. He never kills (he’s famous for this) unless that is really the only option available for the greater good.For example, when trapped on a prison planet he had to use the abilities of the only other inmate to get back to Earth, even if that killed him in the process, in order to have enough time to actually save the planet!

In the case of the Plutonian he was convinced that saving and redeeming him would and should be possible – despite the sin of having killed millions of humans and having wreaked planetary chaos – because of all the great good the Plutonian could actually resume to be doing.

(The media about Qubit) “—- present this embassy security footage of the odd man who forced his way in and disassembled the bomb with — as you can see here — a wave of his hand. Identifying himself to the stymied bomb squad only as ‘Qubit’, he then vanished as suddenly as he arrived —”

“I find a way ! That’s my role ! I always find a way, and I don’t do it out of mercy for the bad guys ! I do it for you because killing someone changes you !”

(About the Plutonian) “I wish I had a better answer than ‘We tried.’ We were as surprised as you, I promise. That’s not much comfort, but I’d rather be honest than whine for forgiveness that we’re going to have to earn anyway. I hope that you’ll consider this a first step and not bludgeon me to death. Because we have work to do.”

“I cannot let this loose on Earth. I made this teleport tech, and I can destroy it — all of it, instantly — everywhere in space-time it exists !”

“Go ahead. Try it with me. Punch me back in time and I’ll kill you in your crib.”

Qubit is actually Mr. Fantastic from the Marvel Universe, while in the DCU he has no clear counterpart. As an interesting sidenote, perhaps Qubit’s spiky hair, which makes his head look elongated, is a nod to the Leader from Marvel Comics.

The full roster of the Paradigm could function well as a team of International misfit and oddball heroes. When combined they have enough skill and power to make for a useful crisis team (in contrast to, say, the Global Guardians). 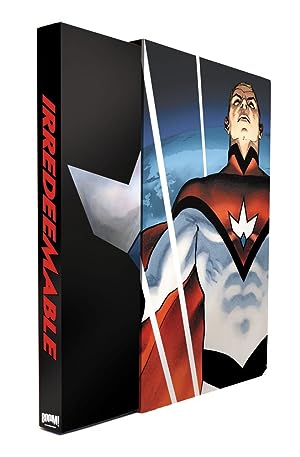 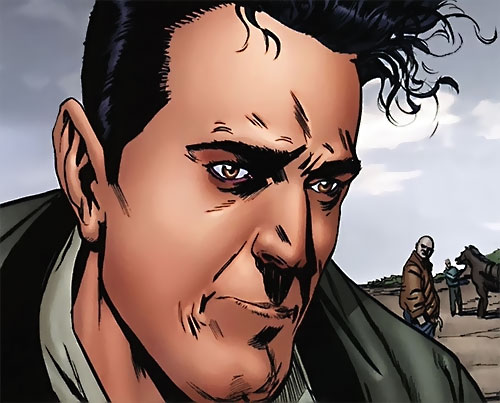 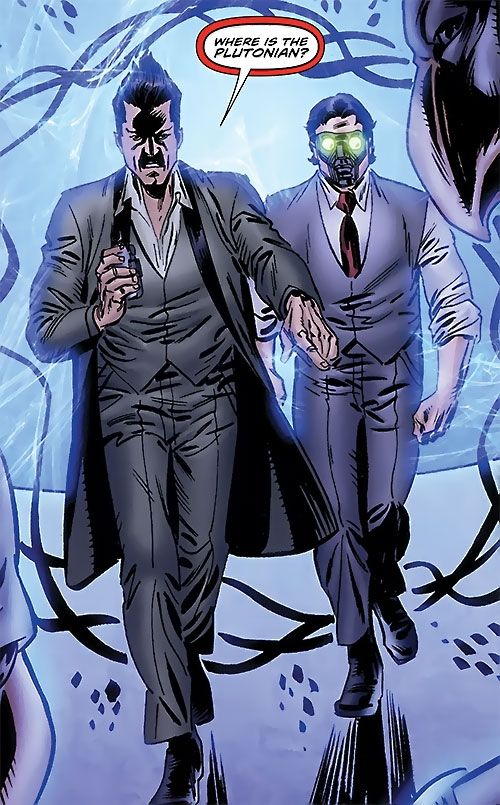 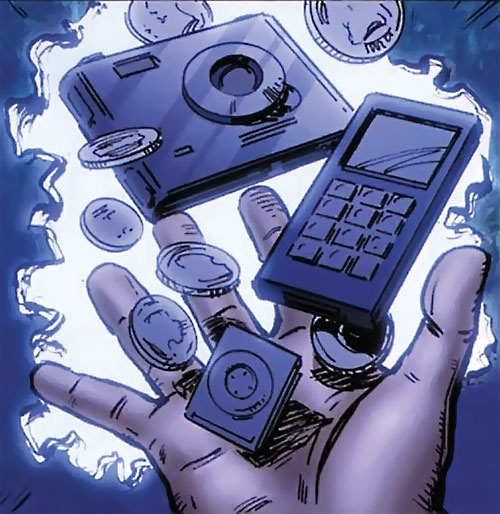 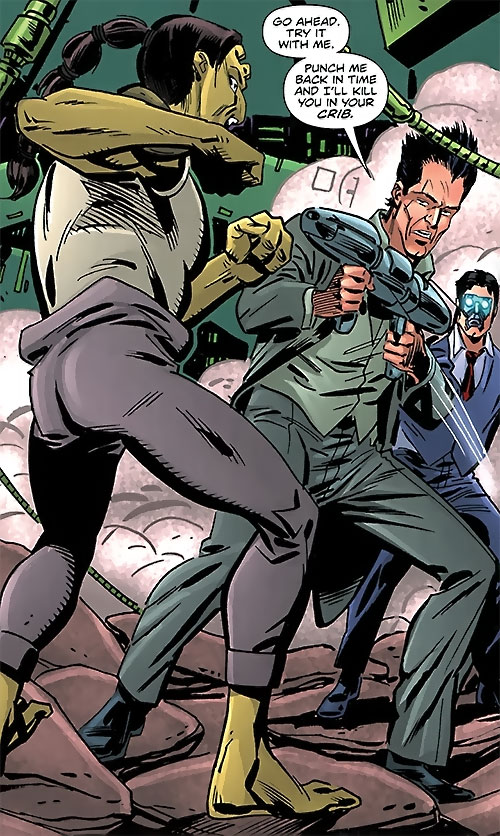 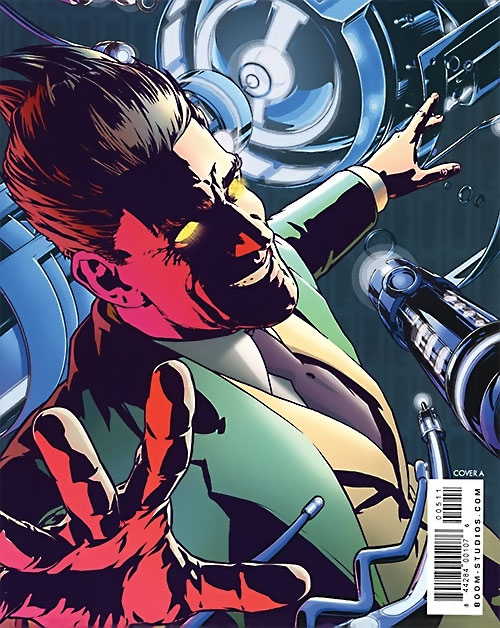