Clea is a character whom Wonder Woman first encountered in 1944 – an evil Queen from lost Atlantis.

The 1944 encounter with Queen Clea is one of the early sightings of Atlantis in the DCU. Or rather “the DCU”, with scare quotes. At that point Wonder Woman’s adventures were pretty much taking place in a continuity of their own.

(For what it’s worth, the earliest mention of Atlantis I can think of for the DCU is More Fun Comics #73 in 1941. Mike from dcindexes.com  can beat that with Action Comics #18 (the Zatara story) in late 1939).

This Atlantis is ruled by two rival kingdoms, both matriarchies. The domination of women is overwhelming, and is even accompanied by sexual dimorphism . The average Atlantean woman looks like she’s about 6’4”.

(Contemporary American and German men were about 5’9” on average.)

Atlantean males, on the other hand, seem to be about 5’4” and to be mentally limited. They are referred to as “manlings”.

Many Atlantean women dress in a pseudo-Classical style reminiscent of Amazons and Greek gods in period Wonder Woman stories. Clea’s people dressed in a roughly comparable way but with a vaguely Mesoamerican vibe to it. Everybody’s White, as was the style of the day.

The technology level seems to be late Classical (with a few oddities such as parachutes). The economy seems to be based on manling slave labour, presumably used for labour-intensive agriculture.

An oft-mentioned deity is called Madra. A presumably less benign deity is Satana, Queen of the Devils.

Most inhabitants speak in a pseudo-Shakespearian manner, comparable to Marvel’s Asgardians.

As with many lost world/hollow Earth settings, there are extinct animals around. For instance the local militaries have air cavalry mounted on vaguely pterodactyl-like giant beasts.

Eeras allied herself with the Allies, and Clea employed German mercenaries. Though the manlings are incompetent and cowardly soldiers, the women are well-trained, fearless and very strong. Amazon records also described Atlantean women as “arrogant and vain”, which is not far off the mark.

The entrance to this Atlantis fragment is right on the equator by 23’ W and can be reach through an extinct volcano. A second volcano entrance, but its location wasn’t given. 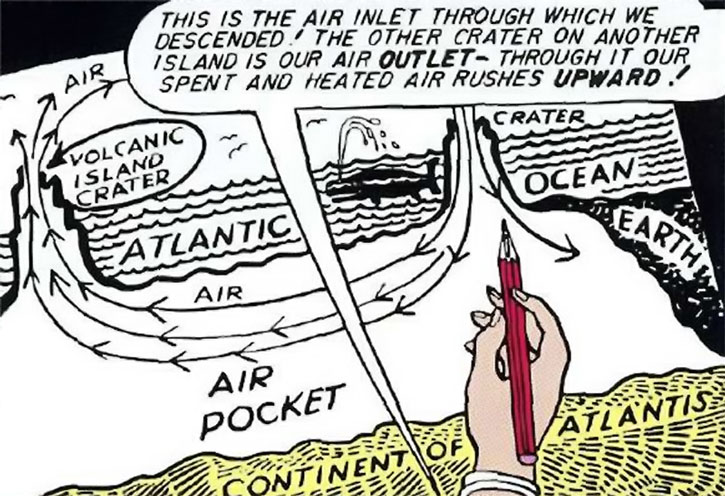 The general setting is helpfully illustrated by the drawing above. According to Queen Eeras, the earth folded over Atlantis when it sank, creating a gigantic air pocket.

Wonder Woman noted that the material of the “dome” forming this pocket was radioactive. It thus provided heat and light and made it possible for a normal-looking ecology to thrive to some extent. Still, the conditions seem to generally be dry and hot.

When discussing with the Superman of Earth-1, Wonder Woman of Earth-2 explains that this is Earth-2’s version of Atlantis. This might be incorrect, since there is a Earth-2 Aquaman with a long career and another Atlantis. Our No Prize Hypothesis  is the Atlantis seen in Earth-2 Aquaman’s adventures simply lost contact with Aurania and Venturia during the sinking.

Queen Clea is an Atlantean woman, and is thus very tall (especially by 1940s standards) and fit, with considerable strength. She’s also trained in the arts of war.

Clea demonstrated that the Amazons had taught her to fly planes, pilot submarines, etc.

She’s devious, manipulative, strong-willed, smart and ruthless. Her domineering presence and quick reflexes allow her to confidently meet most soldiers in close combat, for instance to hit them before they can shoot her.

The life span of Atlantean women is not mentioned, but my general impression was that it was well beyond surface standards.

One amusing lampshading  remark tells us that the Atlantean all speak “the ancient language of English”.

In 1944, Queen Clea reigns over Aurania – and it is possible that she has been on the throne for a very long time. Though Aurania has long been overshadowed by their Venturian rival, the ruthless Clea recently led a surprise attack that caught the Venturian military cold. As a result, Aurania conquered and occupied Venturia. 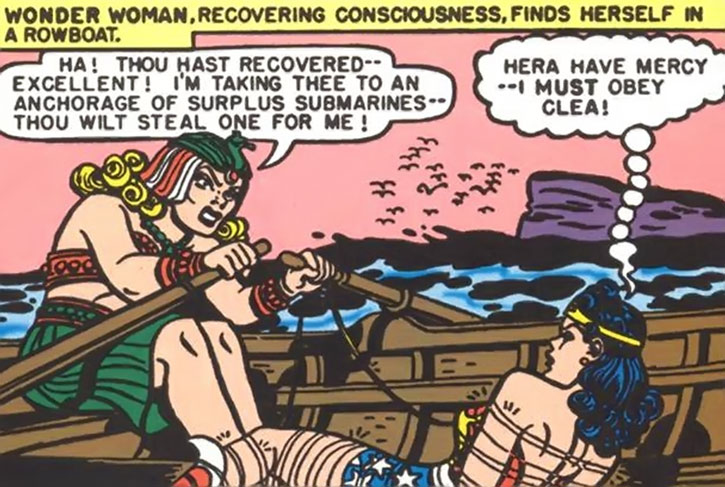 However, the fleeing Venturian queen Eeras reached the surface world. There she adventured for months, looking for some sort of weapon to repulse the Auranians. She focused on a chemical invented by one Van Vlek. Working the trail to that secret formula Eeras ended up in Dakar, where she met American military intelligence agent Steve Trevor.

Pooling their resources they secured the whole formula, and Eeras asked Trevor to fly her to Atlantis on his way back to the US. Trevor, who assumed that she was a lunatic, agreed. As he wasn’t expecting to fly into an actual access to Atlantis he had to land in less-than-perfect conditions. As a result they were captured by Auranian troops.

Wonder Woman came to the rescue, forging an alliance with Queen Eeras as both an Amazon and an American. Meanwhile, Clea was busy throwing Trevor into the arena to fight prehistoric boars. Wonder Woman fought everybody off and Eeras used the “devitamizer” derived from the Van Vlek formula to make all nearby Auranians collapse.

The Venturians had their prisoners wear an iron mask . Clea exploited this by having her daughter Ptra secretly replace her in prison.

Clea then covertly rebuilt Aurania’s power. She formed a band of Auranian pirates who attacked surface world ships. They’d use blasts of air from the volcano to soar on parachutes and board nearby ships sword in hand.

Clea was especially interested in getting herself some of the bigger, stronger and smarter manlings of the surface world. She soon struck a deal with a ship full of German prisoners who were being deported to America for farm work.

The German soldiers, equipped with local swords and shields, attacked the Venturians. Meanwhile, Clea sneaked behind enemy lines to get the “devitamizer” that had previously felled her. She then used it against the Venturian forces and Eeras.

Thankfully Wonder Woman, Steve Trevor and the Holliday Girls were present to investigate the fate of the kidnapped American sailors. They freed everyone, then captured Clea and Ptra.

Crossing the Amazons, round 1

Queen Eeras, being reluctant to execute prisoners, agreed to hand Clea and Ptra over to the Amazons. The incorrigible Clea soon escaped, and even captured Wonder Woman and Octavia – the daughter of Eeras, who was studying on Paradise Island. 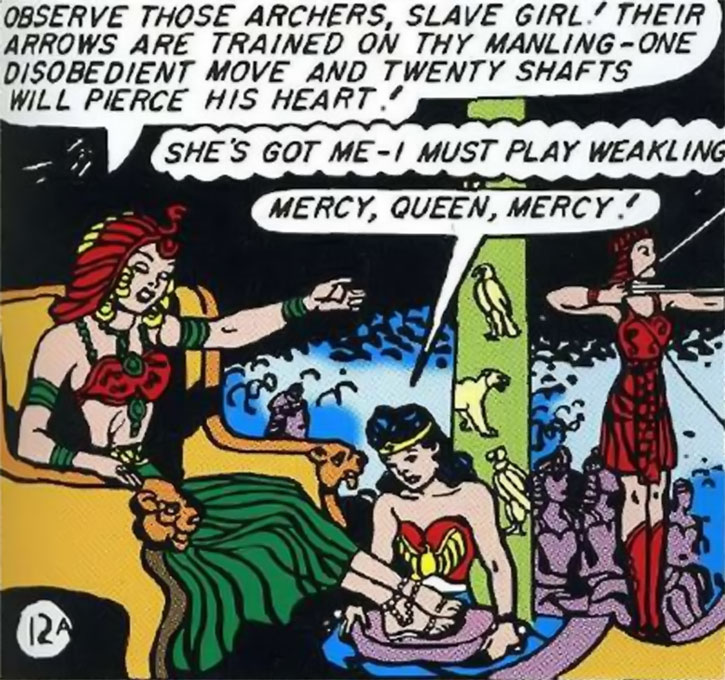 However, when she landed in Atlantis, Queen Clea discovered that there had been a revolution. The inept manlings had taken over, using surprise and captured surface world weapons that had not been used by the more traditionalist female rulers.

Wonder Woman and Octavia escaped. They then made contact with Steve Trevor and the Holliday Girls, who had been flying nearby looking for them. In the meanwhile Clea convinced the stupid manling king to let her rule. But it was too late, and her manlings were dispersed by the Holliday Girls. Clea was again captured and imprisoned by the Amazons.

Crossing the Amazons, round 2

Some months later, the Saturnic slave-driver Eviless escaped from her cell on Paradise Island. She assembled a gang of prisoners, called Villainy, Inc., whose ranks included Clea.

Villainy, Inc. took over Paradise Island, but were soon repulsed by Wonder Woman. Still, Clea took Giganta with her and fled – and they stole a huge chest filled with Amazon jewels, too.

Clea tried to anonymously buy a submarine from Steve Trevor to return to Atlantis – why she needed a sub is unclear. However, Trevor recognised her and played along to capture her. As he made his move, Trevor was knocked out by Giganta. Clea and Giganta then captured the Holliday Girls and Wonder Woman to force Trevor to give them a submarine.

They did force Wonder Woman to steal a US Navy sub for them. But they were recaptured before their submarine could fully dive, and reimprisoned by the Amazons.

Under unknown circumstances, Venturia and Aurania later surfaced from the sea. Though Clea apparently stayed in prison for decades, unageing, she escaped in 1976 and abducted several criminals in America to help her conquer Atlantis.

She captured the Earth-2 versions of the Penguin, Ibac and Blockbuster, the later placed under her control using a stolen girdle of Aphrodite.

Meanwhile, the Penguin and Ibac successfully gathered resources for the real master behind the assembled villains. That was King Kull of the Beast-Men, who was mounting his genocidal attack on Earth-1, Earth-2 and Earth-3 (long story).

Ten years later, Earth-2 was destroyed by the Crisis. But there would be a post-Crisis version of Clea on New Earth.

Clea’s trappings vaguely evoke ancient Mesoamerica (presumably Nahua, given the coif and a reference to “sacred serpents”) by way of ancient Egypt and Greece. Due to a continuity mistake, Clea was no longer drawn as being very tall and strong in her later appearances. 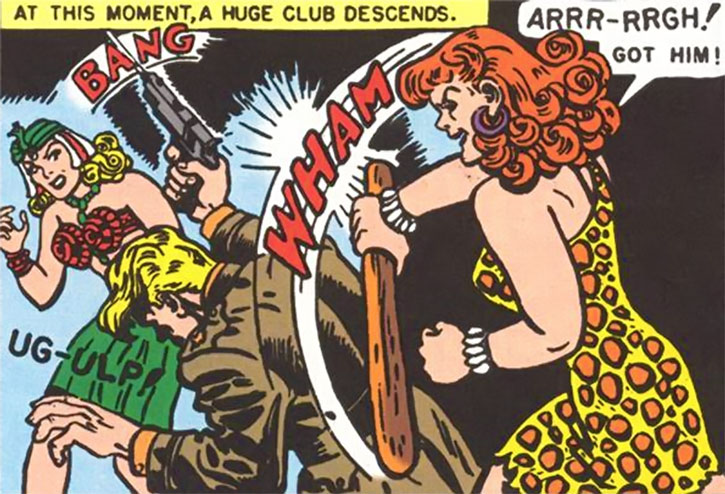 The red dress was the uniform of her parachuting she-pirates. Clea was the only one wearing a mask, presumably to prevent rumours of her return.

Clea is one bad seed – ruthless, cruel, completely self-centred (her own daughter Ptra is a best an expendable agent to her), determined to be in power at any cost, and slippery and honey-tongued when needed. She’s smart and will exploit any weakness in her opponents without making significant mistakes (unless the story calls for it).

Queen Clea seems to do a lot of banqueting with Roman-style live entertainment, presumably because that sounded evil tyrant-ish to the esteemed Mr. Moulton.

“So this is our manling from the lost world – sacred serpents ! He’s as big as a woman !”

“Charge, manlings – a gold disc for every Venturian you kill !”

“That’s what thou thinkest, devil woman ! When you two regain consciousness your real troubles will begin !”

“I have come to see thee because I know thou art very influential with thy government. I wish to buy a [military] submarine.” 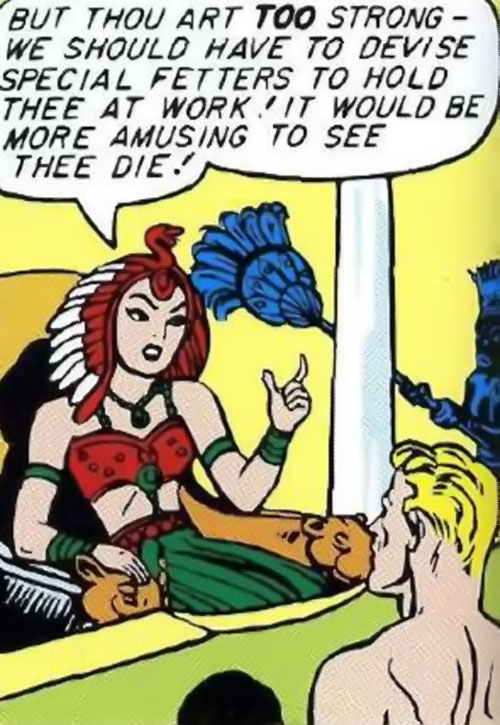 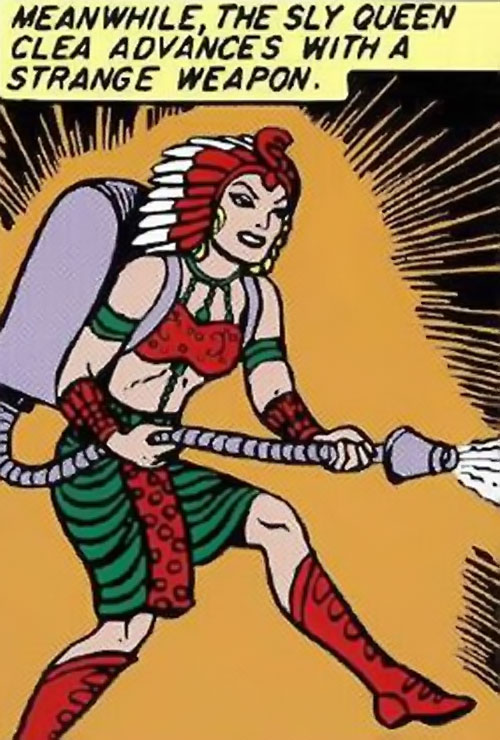 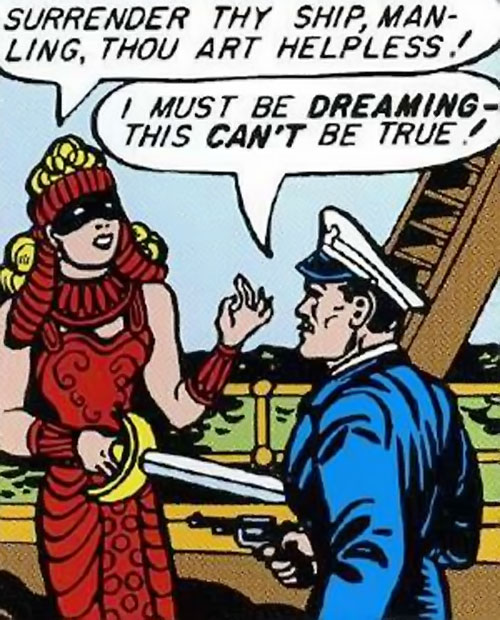