Clea seems superhumanly strong and durable, and a trained fighter. She appears to be roughly equivalent in brawn to Queen Hippolyta of the Amazons, but is not as martially adept. Which certainly doesn’t mean that she’s martially inept.

Ptra seemed to be as strong as Clea, but whether all Auranians are is unrevealed.

Clea wields a golden polearm called the Trident of Poseidon. From what Wonder Woman said, it would seem to be the actual, literal weapon normally wielded by Poseidon. It is unknown whether that is the same weapon that was used by Aquaman to defend Atlantis during the Imperiex War. The Trident allows its wielder to fly and fire large discharges of energy.

During a flashback set in the post-Crisis 1940s, Clea’s hand is surrounded by an energy sphere, drawn like a typical comic book spell. What this spell was meant to do and the extent of Clea’s magical abilities are both unknown.

Presumably, these are very minor abilities that are only topically useful, perhaps even cantrips . In the witnessed case, it is possible that she just created a small gust of wind to prevent her allies from being exposed to a toxic gas. The Sorcery (with the Burnout to explain why she doesn’t use it a lot) in our DC Heroes game stats is solely based on this.

Clea is a good strategist and tactician, even when commanding exotic assets such as superhumans, monsters, sorcerers, giants, etc.. She knows how to best use their strengths, cover their weaknesses and keep the enemy in disarray. A military campaign led by Queen Clea will likely succeed, unless she’s met with overwhelming force… or her temper and arrogance result in a grave mistake. 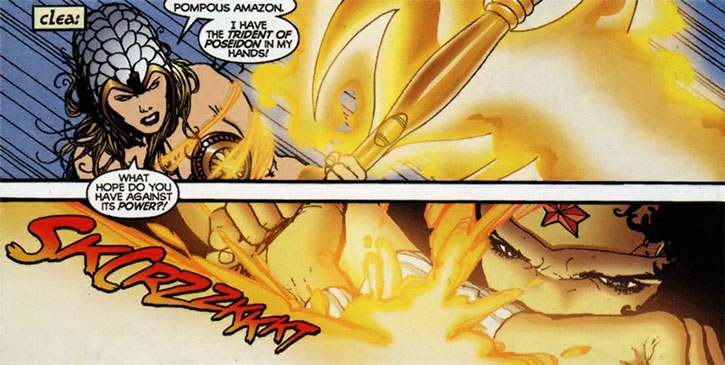 Clea keeps her Hero Points  for Last Ditch Defense, allowing her to soak several punches from Wonder Woman as long as Diana doesn’t use her full strength. Clea is too arrogant to spend her Hero Points on most other applications, though. She assumes that things are going to yield to her will since she’s the Queen.

From all documented incidents, Clea seems to have a rotten luck. At least two things will suddenly turn against her whenever she’s about to grab the prize.

Clea is the deposed Queen of Venturia. Little is known of the post-Crisis version of Venturia. It has been described as “a crumbling Atlantean outpost, buried deep beneath the crust of the ocean floor”. At which date it was established remains unclear. It is possible that it was founded at roughly the same time as the Atlantean outposts in Skartaris .

Some panels clearly show a sky above Venturia. A likely explanation is that, like the pre-Crisis version, the outpost exists in a cavern so gigantic it has its own atmosphere and ecosystems.

During the 1940s Clea was very interested in acquiring an American submarine. Thus, it seems reasonable to assume that the tech level in Venturia was significantly below that of the industrialised nations on the surface back then.

Venturia has a sister city, Aurania, presumably also of Atlantean origin and with a comparable tech level. The post-Crisis Aurania was never seen. But it has reportedly escaped the decay and decadence that plagued Venturia.

Clea always craved conquering Aurania, but the difference in power between the two realms was too great. The ruler of Aurania is one Eeras.

Clea’s age is a mystery. She might be centuries old. She hasn’t aged one whit between her 1940s and 2000s appearances.

Like the pre-Crisis version, Venturia is a matriarchy. It was mentioned that the males were kept in abject servitude. Horrible gladiator duels to amuse the Queen were also mentioned as a key feature.

Clea made two documented attempts to conquer Aurania during the 1940s alone. The first was an alliance with the Third Reich – specifically the naval commander Captain Zahl, who would become a foe of the Doom Patrol.

Accompanied by her daughter the Princess Ptra, Clea had arranged to trade a magical artefact — Neptune’s Trumpet — for a modified German U-Boat. She thought that it would allow her to conquer her Auranian rivals.

The deal was interrupted at the last minute by the hard-charging Wonder Woman (Queen Hippolyta of the Amazons). While Clea knocked out Hippolyta from behind, another heroine came in. It was Miss America, or rather a time-travelling Diana of Themyscira disguised as Miss America to avoid creating a paradox.

Clea’s day was made complete when, on top of running into two separate time travellers, she was betrayed by her daughter Ptra — who mauled her from behind with the butt of a Mauser 98.

Zahl’s submarine hurriedly left and Neptune’s Trumpet was stolen by a German soldier. Ptra presumably left to assume leadership of Venturia, leaving her mother stranded in exile on the surface world.

Wonder Woman later described Clea as “the deposed Queen of Venturia”, which likely means that Ptra’s coup was successful. According to Wonder Woman, Ptra forsook her mother and joined forces with Aurania.

Undeterred, Clea tried to establish herself in the surface world. She assembled a band of opponents of Wonder Woman — Hypnotic Woman, Doctor Poison (Princess Maru), Cheetah (Priscilla Rich) and Zara of the Crimson Flame — as Villainy Incorporated.

In 1948 they raided the Fort Church naval base to steal attack submarines. Clea wanted to raid Aurania (and possibly Venturia), then conquer Atlantis thanks to the power of her new allies. Under her rule, Atlantis would then subjugate other subaquatic civilisations.

This plan died in the crib. Wonder Woman (Queen Hippolyta of the Amazons) again intervened and easily defeated Villainy, Inc..

Any other adventures and schemes the wily and warlike Clea may have conducted during the 1940s remain undocumented. However, one panel hints at Clea having been defeated by Wonder Woman (Queen Hippolyta) and Miss America (Joan Dale) at some point between 1941 and the 1948 Fort Church battle.

Furthermore, Wonder Woman did describe Queen Clea as having been one of the more consistent enemies of her mother during the 1940s.

In the early 2000s, during the Imperiex War, Atlantis was wrung from Earth and disappeared. For unrevealed reasons, this shocked Clea. Thus she undertook a great quest to find Atlantis, operating from an unspecified headquarters looking very much like Venturian architecture (a lost outpost of the lost outpost ?).

Apparently her goal was not to just find the missing Atlantis, but to conquer it. Perhaps she assumed that Atlantis was in disarray and weakened, offering her a unique chance to take over.

One of the first things Clea and her new team did was to steal a god’s weapon — the Trident of Poseidon. Clea knew that this would both be a potent weapon, and a means to locate Atlantean magic, making it critical to her plan. How the grand theft went is undocumented. But Villainy, Inc. was successful and Clea could soon wield a divinely-forged weapon. 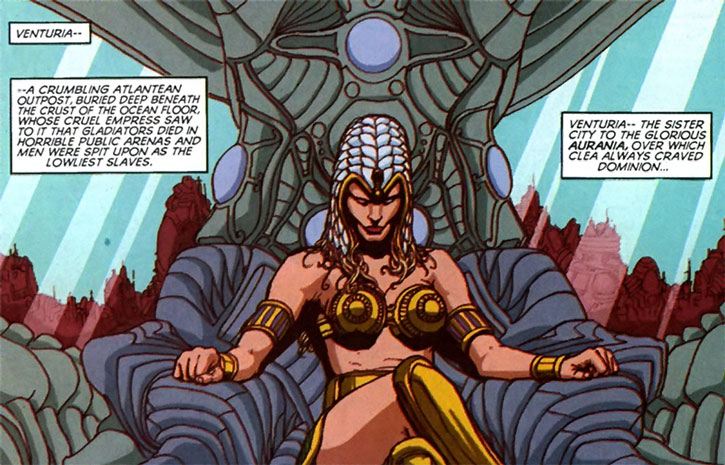 Clea and her superhuman allies briefly thought that they had found Atlantis in another dimension. But as it turned it was another long-lost Atlantean colony – Skartaris. Though Skartaris was defended by great heroes (such as the Warlord (Travis Morgan), his daughter Jennifer, the warrior Machiste, etc.) they were quite outmatched by Villainy, Inc.’s firepower.

From the historical records Clea knew that she would probably find in Skartaris some long-lost techological and magical artefacts from ancient Atlantis.

The conquest of Skartaris took a while and saw untold carnage. Clea killed hundreds if not thousands with the Trident. Eventually the capital Shamballah was taken, and the Morgans felled. Once established in Shamballah, Clea had Jennifer Morgan tortured until she confessed the location of the abandoned Atlantean computer vaults.

At this point, what seems to be Clea’s usual luck struck again. Wonder Woman (Diana of Themyscira) showed up on Skartaris and led the defeated populations to oust the occupiers before they could solidify their hold.

Furthermore, Trinity betrayed her team. Though most assumed that she was some strange superhuman, she had always been an ancient Atlantean piece of software looking for a suitable computer to execute on her programming.

Ashes, ashes – all come down

As the deposed Queen of Venturia was being defeated by Wonder Woman, Trinity had the Atlantean computers rewind time itself, further ravaging Skartaris. Clea was caught in a reversed chronal flux that swiftly de-aged her into nothingness. Wonder Woman repossessed the Trident.

Queen Clea — again holding the Trident of Poseidon — was later seen as part of a small army of Wonder Woman foes assembled by Circe during the early 2000s. It was met and defeated by Wonder Woman and numerous allies.

Though there’s a possibility that Circe’s allies were simulacra, it is quite possible that Circe managed to magic Clea back into existence and to recover the Trident.

The power-hungry queen has not been seen since, however.

Clea is your typical haughty, evil, arrogant, cruel queen lusting after power, vengeance and conquest through any mean. She doesn’t care about anybody but herself. She’s something of a fairy tale character, loosely comparable to the White Witch of Narnia, the Wicked Witch of the West or various evil queen/stepmothers.

Her enjoyment of cruelty and her all-consuming desire for power and domination are obvious despite her icy countenance and authoritative manners. She’s very articulate, and a bit pompous.

Queen Clea is smart and competent, and her plans and leadership are solid. Though her temper and arrogance might lead to questionable decisions, she’s unlikely to commit genuine mistakes. It will usually take a combination of powerful opponents and rotten luck to stop her.

Clea occasionally swears by Pallais and Shalako. These are two Atlantean figures. Pallais was the great sea goddess of the ancient Atlanteans, and the sorcerer Shalako was the brother and enemy of Atlantis’s first King, Orin.

(1940s) “You will not stop me, Wonder Woman. Never again. We will take these submarines and overthrow Eeras of Aurania. Then we will take over Atlantis and use their armies to conquer the oceans of the world.”

“Your contributions will be remembered, Jinx, and you will be justly rewarded.”

“Give [his tongue] back to him, Jinx. I want him to say my name. I want Travis Morgan and his insufferable daughter to say the name of the monarch of Venturia who had conquered Skartaris…”

“Doctor Poison, I think it’s time you stopped snivelling like your dear grandmother, and unleash the experiments you’ve been working on in your body-banks.”

“The Amazon and her wretched mutiny will rot with Shalako in Hell before we lose everything we’ve taken here !”

Bonuses and Limitations:
Sorcery has a Catastrophic Burnout. 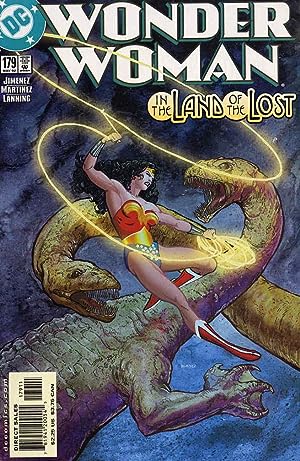 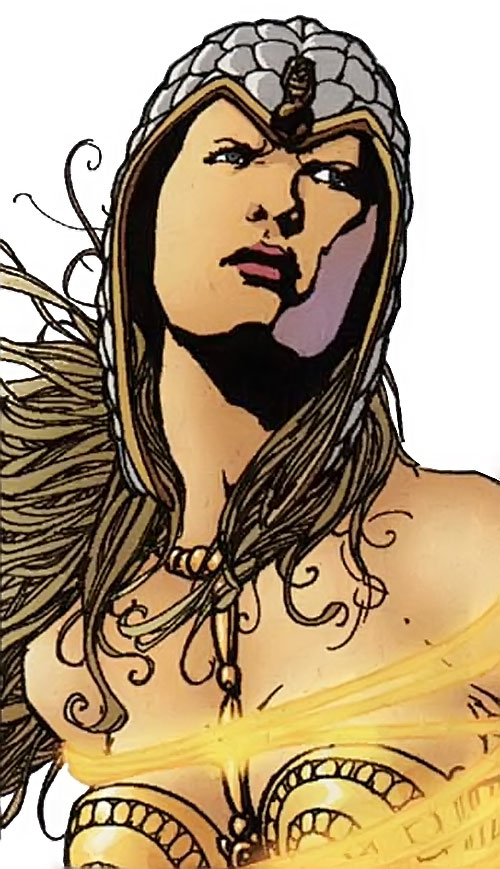 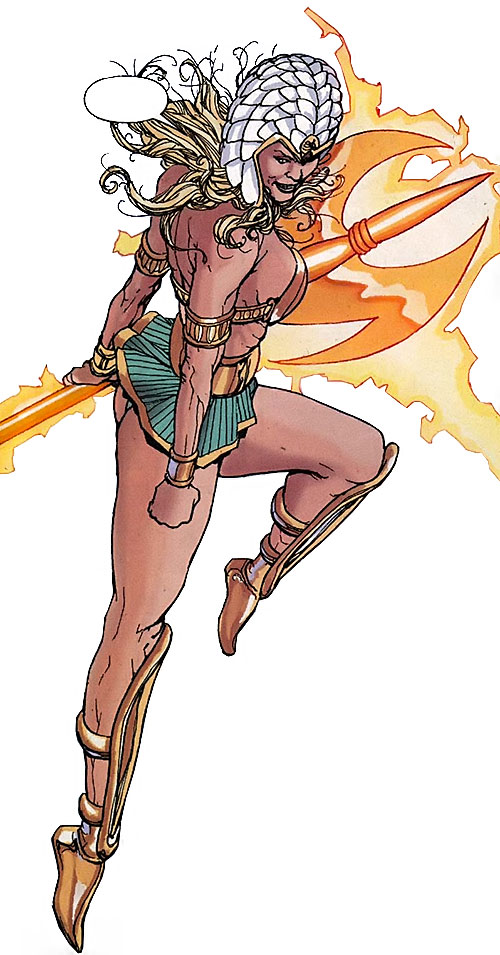