Her boots have vibranium  soles, enabling her to:

She also carries a pair of pistols which fire gel-filled slugs.

Chanté grew up in Chicago with whom she believed to be her grandmother. However, her parents were from Wakanda, where her father had been chieftain of the Jabari tribe. When T’Challa (Black Panther) outlawed the tribe (due to the Cult of the White Gorilla which they embraced), her parents moved to America to escape tribal enemies taking advantage of events.

Chanté was born in America, and they named her Ce’athauna Asira Davin (say-athWANA a-SHEER-ah dah-VEEN). ’Asira Davin’ is Wakandan for “the Peace of God,” believing her to be a product of the White Gorilla God and intended to bring a lasting peace to Wakanda.

She also had the more American name of Chanté Giovanni Brown, which is the one she’s more used to.

Alas, the distance didn’t help them escape the more extremists Wakandans. Her parents were killed while she was still young. On hearing what had happened, T’Challa assigned a member of the Wakandan security forces, Toyosi, to pretend to be Chanté’s grandmother and raise her.

Chanté grew up relatively normally, taking the name Queen Divine Justice. She only learned that she was Wakandan when recruited to the Dora Milaje to take the place of the traitor Nakia. While she didn’t really question it at the time, it was due to T’Challa wanting to protect her from those who would use her as a political pawn, since Nakia knew about her.

She was taken to New York to meet T’Challa, where she ran into the Hulk on one of his rampages. She managed to befriend and calm him down, even taking him dancing in a club. 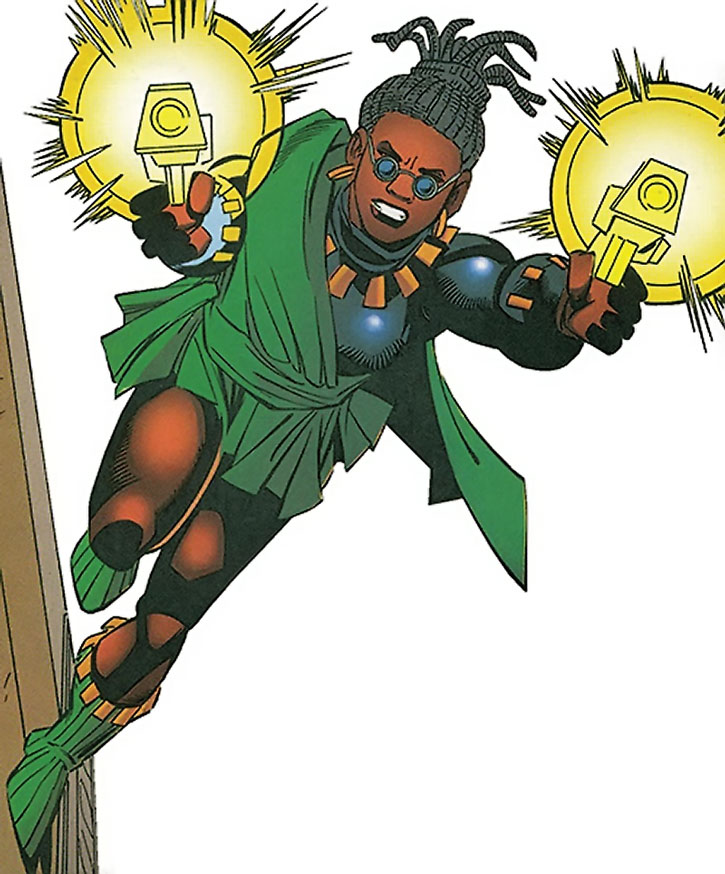 Chanté underwent intensive training to try and bring her somewhere near the level needed for a Dora Milaje. She was also taught Hausa, as this was the only language she was supposed to speak, and then only to T’Challa and her sister Dora Milaje, Okoye.

Her first chance to use her training came when Nakia, now calling herself Malice, tried to kill T’Challa’s former fiancée Monica Lynne in the Wakandan palace. Chanté managed to get Monica clear.

When out in the Wakandan wilds, she met Vibraxas. He was sleeping after having been manipulated into using his power to release Klaw, and Chanté nicknamed him “NFL” for Nappy Fro Lad. She didn’t tell him she was Dora Milaje, and when he later met her in the palace kitchen he assumed she was a cook.

They grew close, but he was distraught when he realised she was Dora Milaje, and the shame he’d brought on his family by talking to her. Chanté began to understand that though the bride-in-waiting part was mainly ceremonial, she was actually banned from any kind of relationship, or even talking to any man other than T’Challa.

Queen of the Jabari

While escorting T’Challa’s mother to safety during Malice’s campaign against his loved ones, Chanté was abducted by the Man-Ape. He took her to the Crystal Forest where the remnants of the Jabari tribe had gathered in defiance of T’Challa’s rule.

He revealed she was ruler of the tribe, and gave hints as to T’Challa’s role in her parents’ death.

Vibraxas tried rescuing her, but was captured. T’Challa soon arrived to rescue them all and capture Man-Ape. Chanté confronted him about what had happened to her parents, and he told her the truth.

Uncertain how to feel about things, she returned to Chicago, confronting her ’grandmother‘. Still dealing with these revelations, she was drawn into a meeting with Junta, who wanted her help contacting T’Challa.

She resisted, and proximity to his powers knocked her out. Waking, she found herself in the middle of an XCON operation Black Panther was trying to dismantle, helping Junta protect President G.W. Bush, Jr.. She spent much of the time arguing economics with the President, but XCON were eventually dealt with, and Chanté returned to Wakanda.

Considering the Man-Ape a political prisoner, Chanté gained his word to return to the Crystal Forest if she secretly freed him from prison. He reneged on his word, attacking T’Challa and killing the comatose “Happy Pants” Panther.

Chanté and Vibraxas fled to the Jabari tribe with Man-Ape. Wakandan forces soon arrived. With war imminent, Chanté made a last-ditch attempt to reason with T’Challa, but recent injuries had left him hallucinating and he lashed out, seriously wounding her.

He regained his senses in time to call and end to hostilities before they went too far, though.

Renouncing her obligation to serve him as a Dora Milaje, T’Challa released the Jabari from Wakandan rule, and let Chanté become their queen. He left her and Vibraxas to their future.

Vocal and opinionated, Chanté is forthright in her views, especially about economic issues.

She still has trouble coming to terms with some cultural differences between Wakanda and America, especially the ones wherein she wasn’t allowed to speak to anyone but the King.

Queen: “It’s fascism. It’s a targeted fragmentation of the Afro-American community, the deification of unchecked acquisitiveness and targeted, surgical destabilization of the tribal bond masked as corporate rightsizing and migration pattern shift. The remapping of congressional districts, affirmative action’s attrited death of a thousand cuts — when a sister gonna pilot the bumpin’ space shuttle ??”
Bemused Ice Cream Van Guy: “I’ll have to look into that.”
Queen: “Send the poor peeps to die in Kosovo so the drugs money don?t get disturbed, while, here at home, the manufacturing base continues to be decimated, shifted to the sun belt and Thailand. Michael Jordan sneakers getting sewn by dirty little mud boys in Honduras workin’ for 12 cents a day — everybody’s drinking Sprite, everybody’s got a gold card, everyone’s John Wayne. Now here come the I.C.P. [Ice Cream Pusher] blaring your cheery jingle, eliciting a Pavlovian response from these innocent children, while trampling their dignity and self-esteem by dividing the haves from the have-nots ! Gotta hand it to you, I.C.P., it’s the model of efficient antidisestablishmentarism.” 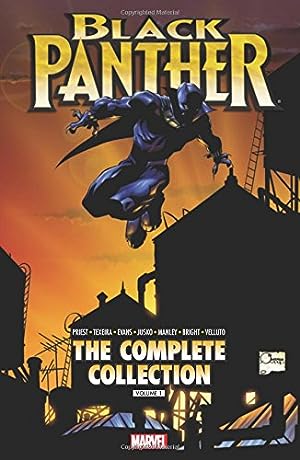 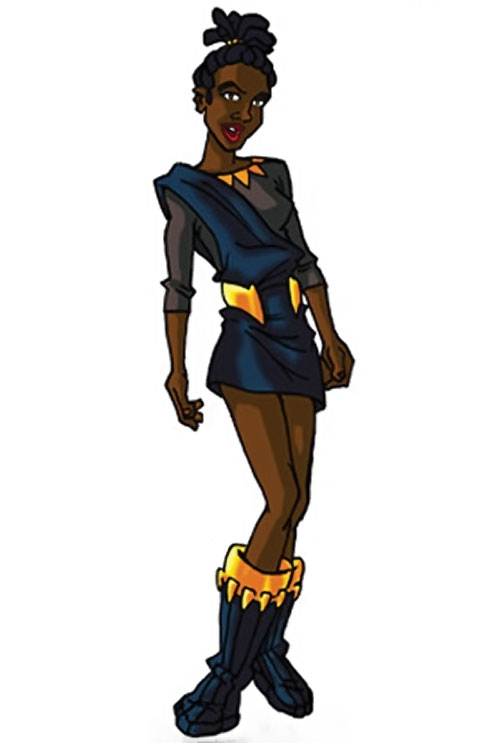 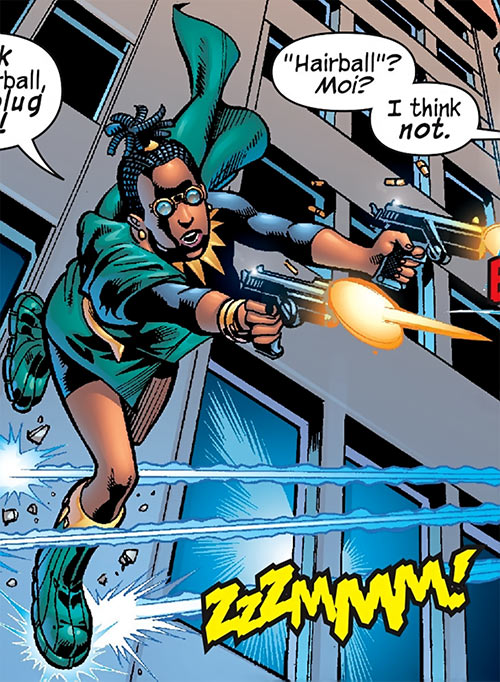