Raul Quentino was a squad member in the 1992-95 Silver Sable and the Wild Pack series.

For context, we suggest that you first read the Silver Sable International organisation profile and the first Silver Sable character profile.

Quentino is both a skilled commando, and a remarkable technologist and computer hacker.

Furthermore, he’s an excellent pilot, a powerful boxer and an accurate operator of exotic weapon systems, especially those he designs himself.

He’s likely behind many of the special weapons and vehicles the Wild Pack uses. At the very least, he seems to have improved most of them.

Quentino is an extremely fast learner, especially when it comes to technology.

Quentino was born in Mexico, but he ended up becoming a part of the South Central Los Angeles gang scene. There, he was known under the street name G-Wiz.

Although he dropped out in ninth grade, he had an uncanny ability with electronics. Raul was best known for building custom sound systems, equipping prestige customised cars with huge sound for a price. His homies made fun of him for reading so much technical stuff, but they certainly appreciated his work.

He was once imprisoned in Crenshaw for unrevealed reasons.

They tried to make me go to rehab

His gang, the Jackclubs, eventually got cut down in a drive-by shooting. G-Wiz, the sole survivor of the massacre, was arrested. As the police investigated, he was sent to rehab due to his heroin addiction.

The rehab went surprisingly well. A councillor also managed to reach to him and have him demonstrate his tech skill. Quentino soon proved invaluable at the rehab center, rebuilding and thoroughly upgrading the security suite and various pieces of equipment.

Yet, he didn’t consider himself cured. Beside he had not set waiting for him outside, no future in the streets, and nobody would consider hiring a ninth-grade dropout heroin ex-addict ex-con.

Now pretty much an employee at the rehab center, Quentino took to boxing, a popular sport in that place.

A silver of hope

This combination of survivability, tech skills and pugilistic prowess led to an unexpected offer from Silver Sable International. Raul was thus recruited into the Wild Pack. He of course also received elite military training from that company, as well as formal training in engineering.

Quentino eventually graduated to the Wild Pack A-team, an elite force tasked with operating alongside Silver Sable herself.

However, he also discovered he had contracted AIDS during his junkie days. Then, another bad stroke of luck resulted in him being shot by Spymaster II in order to save his friend Larry during a riot in Los Angeles. Quentino survived, but it was feared that he would never walk again.

Despite his crippled legs, Quentino remained on the team as a technologist, hacker and even pilot. His homie Larry replaced him as a field agent, at his request.

While in his civvies, Quentino now tends to dress like a Mexican cowboy. He no longer wears gang-style clothing.

Quentino is quiet and disciplined. He genuinely appreciates the chance Silver Sable gave him, and works hard not to let her down.

He’s far less violent than headcases like Crippler or Chen, and in fact prefers to use non-lethal means. But there’s a limit and he’s unlikely to take additional risks to avoid killing.

Quentino is unusually appreciative of natural and man-made beauty around him. He’ll sometimes pause to reflect on beautiful places while his teammates are all busy with their current military op. This melancholy is in large part due to having AIDS – which back then was almost a death sentence.

Being from the concrete jungles, Quentino has a degree of empathy with poor people trying to survive under harsh circumstances. He will often excuse violence and crime when they come from the genuinely desperate and hungry.

“Lock yourselves down – we’re in for some chop ! Shields were damaged by that hit ! I don’t know if we can survive another…” (BWOOM)

Quentino : “I don’t know what I’d have resorted to on L.A.’s mean streets if Sable hadn’t pulled me out of the killing field…”
Silver Sable : “You’d have wound up on a slab, Quentino.”

Drawbacks:
MIA toward crack cocaine, SPR (AIDS). After the battle in L.A., he acquired another SPR (Crippled legs). 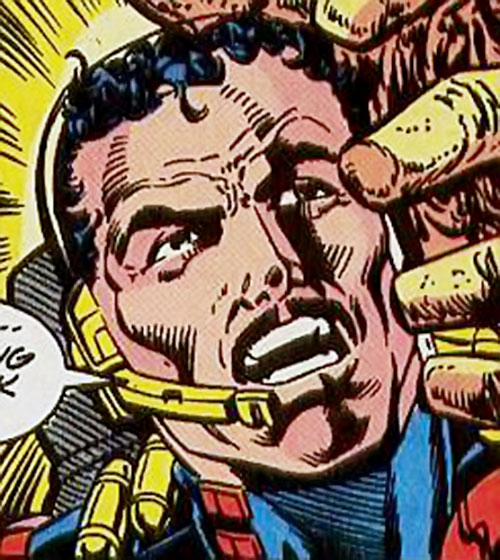