So let’s explain things in a calm, collected manner.

A Question of Time

A timeline is the simplest way to understand the “core” version of The Question as the character evolves.

Steve Ditko creates the character and the original stories. These are published by Charlton, a comic book company of that era.

The Ditko stories are assumed to take place in the “Charlton action heroes universe”. Yet, the Question, who operates in “Crown City”, never actually meets any other Charlton character.

Two publishers, Charlton and AC Comics, publish a handful of non-Ditko Question stories. These stories are *not* part of any subsequent continuity.

Though they are now DC characters, they live on a separate version of Earth, called Earth-4. Back in those days, the DC Comics characters lived on multiple versions of the Earth – though travelling from one Earth to another wasn’t infrequent.

Crisis on Infinite Earths starts. This controversial cosmic catastrophe is meant as a way to simplify DC Comics cosmology by turning all these parallel Earths into a single world, with all characters living on the same Earth. This world is called New Earth.

Earth-4 is destroyed in the Crisis, but its characters now exist on New Earth. In multiple cases, this means that their past is now different than what it was on Earth-4. The general idea is – “the stories that took place on Earth-4 also happened on New Earth, but perhaps in a different manner in order to conform to New Earth’s history.”

In the case of The Question, not much needs to change. The 1967-1968 stories presumably happened on New Earth. Still, small details need to be adjusted. Crown City becomes Chicago, Vic’s adventures presumably take place in the early 1980s rather than the mid-to-late 1960s, etc.

Immediate pre-Crisis. That was a time when the post-Crisis DC universe is being redefined partially on the fly, with significant continuity glitches.

In the specific case of the Question, the pre-Crisis/Ditko version of the character (with the exact same design, a broadly similar characterisation, and even a style reminiscent of Ditko in art and narration) makes a handful of appearances in this still-settling universe.

Dennis O’Neil and Denys Cowan start a new run of The Question. This is the same character, but he soon undergoes a drastic re-examination of his values, his personality, his modus operandi… After these experiences, he becomes a very different person. The genre of the stories also becomes much more realistic and complex. 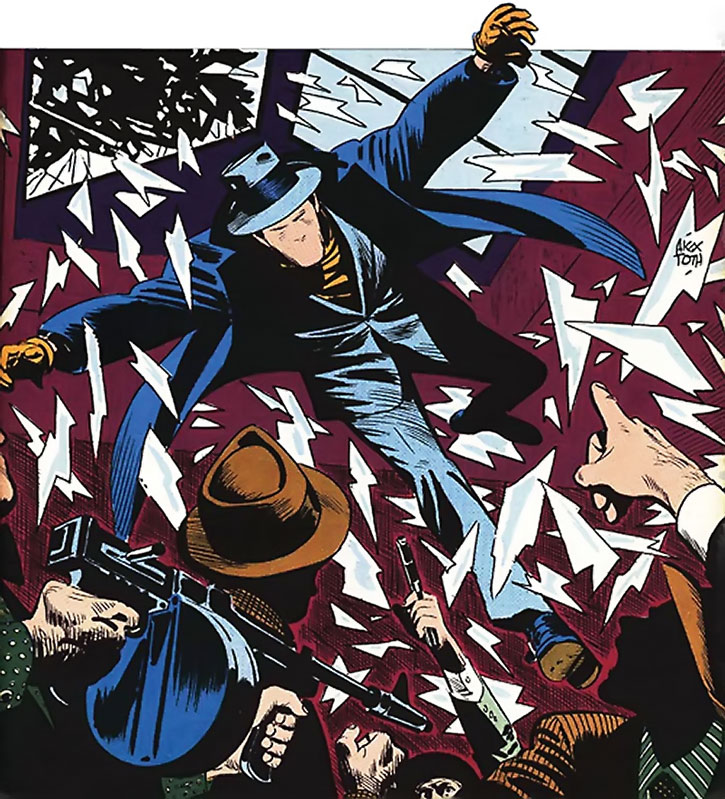 Moore and Gibbons’ landmark graphic novel The Watchmen includes a character called Rorschach. He is clearly based on The Question and alludes to many of Ditko’s themes, since Moore originally wanted to use the Charlton characters.

The L.A.W. team features a version of the Question, among other Charlton action heroes.

DC Comics publishes a The Question mini-series by Rick Veitch. This takes place in a different setting, completely separate from New Earth.

This Question closely resembled the “Ditko Question” in his youth, but became something… strange with “urban shaman” powers.

The Question succumbs to cancer. His close friend, Renee Montoya, eventually accepts to become his successor as the second Question.

A new cosmic crisis shakes the DC Universe, which is again split into multiple, parallel Earths. The event is called 52 – there are now 52 different Earths.

One of these is called Earth-4. This is *not* exactly the same world as the pre-Crisis on Infinite Earths Earth-4, but it seems close and is populated by a version of the Charlton Action Heroes. Thus, somebody who presumably resembles the “Ditko Question” is active on this Earth-4.

Reality is a-rewritten anew again in the Flashpoint event. A mysterious person who evokes Rorschach (Walter Kovacs) of the Watchmen is turned into a mysterious entity called the Question. This is very mysterious.

Versions of The Question

Now that the convoluted bit has been explained, stuff is straightforward.