The Question’s detection and hand-to-hand fighting skills have improved, but his looks and agenda are unchanged.

One important evolution is that he has developed shamanic capabilities putting him in touch with soul of cities – especially Chicago. As an urban shaman, he deals with the city as if it were a person, and usually beseeches its help by offering stream-of-consciousness improv poetry as incantations.

Cities know everything that happen within them (barring cloaking effects). They can provide clear portents when supplicated. For instance, a dripping fluid could form an arrow pointing toward what the shaman is looking for, or a long crack could appear in the pavement leading the supplicant to a specific place.

Sage is in touch with chthonic energy – known as ley lines, chi, earth forces, etc.. In his view they are channelled through large cities rather than, say, megalithic alignments or ponds with crooked bridges. If he’s present at a major nexus (such as a major Hong Kong building built to act as a feng shui node, Stonehenge, etc.) he will soak chi in and become even more dangerous.

The Question can meet other shamanic types in a sort of spirit combat. This is feasible as long as both fighters will have some type of astral projection ability.

In game terms, this is treated exactly as if the combat were taking place physically, using the same numbers. The fighters are considered to have all their weapons, clothes, etc. and the fight takes the normal amount of time.

However, the fight is invisible in the physical world. The only thing onlookers can notice is that the two fighters must speak truthfully to each other whilst the spirit fight rages on. The loser must either surrender or flee, and seems to have no choice in the matter.

Beyond duelling, astral projection (in DC Heroes terms, Spirit Travel) can be used to spy around. Sage apparently has to physically touch a building to see it from the spirit plane, but once he does he can see and hear everything that goes inside, have his invisible spirit form move closer to observe something, etc.

Sage can also operate machinery from the spirit plane. For instance he could fight men physically and at the same time spiritually activate nearby elevators or water sprinklers.

The spirit plane further touches the realm of the dead. Sage uses this to commune with and contact the recently deceased who are prevented from moving on. For a spirit to linger on seems to require exceptional circumstances, though.

Crime in the city

Sage’s shamanic abilities give him a peculiar form of Area Knowledge. On his own, he has a normal Area Knowledge Advantage for Chicago, developed through experience. However, he can temporarily acquire an Area Knowledge of major cities by communing with them.

This is treated as a sort of Rich Friend Advantage, except it adds an Area Knowledge Advantage for that City rather than APs of Wealth. Sage must be able to contact the city in question to use this “Rich Friend” ability.

Any Area Knowledge Advantage the Question thus acquires has the Real Time Bonus – that is, it is accurate up to the second, providing perfectly up-to-date information. Examples have included finding a man dealing in underage prostitutes, a man selling designer drugs from a non-fortified location, etc. in record time by just walking around and being guided by the city.

If a city wants to help Sage (for instance, if Metropolis wants the Question to save Superman), events within it will conspire to protect Sage.

At this point, Vic has been the Question in Chicago for 10 years. His career presumably closely matched the Ditko events, though it took place in the 1990s rather than in the 1960s.

The series adds one snippet of information about his past. He was one or two years behind Lois Lane in journalism school. Lane was editor-in-chief of the school’s newspaper. She ended up having Sage run the poetry section of the paper. He was making her vaguely uncomfortable and she wanted him to be busy elsewhere.

The Question’s keen mind, strong emotions and exceptional willpower gradually led him to realise the existence of energies in the city around him. This seemingly built upon chi awareness training during unspecified martial arts instruction. As the years went by the Question became a rare self-taught urban shaman, with genuine supernatural powers.

This unusual path into the world of mysticism did not change his nature. He saw or imagined how the city of Chicago shared his passion for justice and his crime-busting crusade. The strange, creepy vibe he’d always been giving off strengthened. He became increasingly asocial and concerned with things incomprehensible to non-mystics.

Yet his career as a journalist and anchorman made a star out of the moody, reclusive fanatic. It even made it difficult for him to appear in public without being mobbed by admirers and autograph seekers. The faceless nature of the Question acquired further levels of symbolism, making a non-entity out of a national television icon, and representing his nature as a servant of higher entities.

In 2005, the Question fought gangsters in a meat-packing plant. His target was their hired hit-man – Killebrew aka the Psychopomp, a shaman.

The Psychopomp was not just a killer. He specialised in accompanying the spirit of his targets into some ghastly afterlife rather than wherever they were supposed to go. Not only did that satisfy his customers who wanted hated enemies to suffer forever, but in a comic book world that drastically reduced the chances of the person coming back from death.

The two shamans fought a spirit duel, and Killebrew lost then was killed whilst trying to flee.

Sage learned that Killebrew had been hired to kill Superman. The Man of Steel had recently returned from death, and his foes wanted to make sure that the next time he would stay dead. Killebrew’s client was a fantastic criminal operation called the Subterraneans.

The Subterraneans were a highly professional organisation employing military tactics and discipline. They saw operating in Metropolis, right under Superman’s nose, as the greatest challenge in the criminal world.

Their base was the Ghost Train, a lead-lined subway train riding among the general traffic along random paths. From the Ghost Train they permanently monitored Superman, as well as global and local news.

The Subterraneans would only launch operations when Superman was busy elsewhere, constantly observing what he was doing and keeping forward observers on over-watch.

All Subterraneans were willingly rigged with molecular explosives. These completely disintegrated their body and equipment when detonated. This was meant to prevent Superman from ever learning their existence, and used in the rare case an operation would go sour.

The resellers for the Subterraneans’s services (hard drugs, prostitution, organs legging, etc.) followed a strict set of instructions. In particular, they only ever made illegal deals in lavatories. The Subterraneans correctly reasoned that Superman, with his sterling morality, would never use his super-senses and x-ray vision to monitor people on the toilet.

Likewise, the payments to the Subterraneans where made by flushing special capsules down certain toilets, where dedicated plumbing would pick the capsules and drop them into collection baskets that the Ghost Train regularly checked.

The Subterraneans were quite successful. Not only did their operation generate enormous income, but Superman never even suspected their existence.

That would change, though. The Question had means to know what even Superman couldn’t. And though the Man of Steel reviled the Question’s lethal methods, Metropolis asked Sage to protect its protector from Luthor and the Subterraneans.

This version of Vic Sage is a prolongation of Ditko’s version. Certain aspects are even more marked, as Sage further hardened after 10 years as the Question. Veitch focused on Sage’s side as an outsider animated by unique motives, and not necessarily quite sane.

This version of Sage is a creepy loner existing in two worlds. One of those is ruled by mystical mumbo jumbo, impressions and embarrassing slam poetry. Sage doesn’t mingle and doesn’t care about people. What counts is serving cities, and Justice with a righteous, capital J.

He’s even more obsessive than before about his black-and-white conceptions of Truth and Justice. This is much more important to him than human contact, social niceties and the like. He’s a fanatic. To say that he lives in his own world is much more literal a description than most would suspect.

The Question has always considered that the standard super-heroic code against killing was for bleeding hearts who don’t know from true justice. His opponents have a marked tendency to end up dead, quite possibly in awful and grisly circumstances, and that leaves the Question completely unmoved.

The death of a Bad Guy (since for him there are only Bad Guys and Good Guys) is as important as the death of a rat. He considers Superman’s ethics with disdain.

Sage has a lot of experience as the Question. His skills, combined with his supernatural intelligence-gathering methods and minor but useful powers, make him even more of a force of nature than he was in the original stories. He’s not just a grumpy faceless dude in a trench-coat.

He can know everything, he can be anywhere, he can wear any face, he’s unstoppable, and he’s a particularly brutal street fighter.

This later part is the most reminiscent of Rorschach. This Question will routinely use nearby objects, surfaces, weapons, machines, vehicles, etc. to demolish and kill his enemies with a quiet manic intensity and a startling level of speed and strength.

The city being his ally, the Question appears and disappears with impossible ease. He often pops up behind his opponents as they frantically search for him. The Question is extremely good at triggering diversions and tactically seizing the moment. Some people he fought compared him to John Rambo.

The Question is attracted toward Lois Lane ever since he met her (about 15 years ago), with a creepy-geek-that-might-shoot-up-the-school vibe. He never actually approached her since he knows and accepts that it would be pointless.

“I am your hands, Chicago. […] I am your will. Executing your instructions. Without prejudice. Or mercy.”

“As the river and the mountain speak to the native, so, over time, did the living city whisper to me. Chicago, too, is an ally of truth and justice.”

This version apparently diverges from the DC Universe Question after he and the Blue Beetle fight Muse and his youth gangs in Chicago. Vic never moves to Hub City, is never killed by Shiva, etc. He stays straight in the mould invented by Mr. Ditko, with added mystical elements.

It is possible that, post-52, the Question who exists on the new Earth-4 is the Veitch version rather than the old Ditko version. However, the Veitch version interacts with a then-modern Superman (married to Lois Lane and everything). That doesn’t seem to be what Earth-4 does. Since the Veitch stories is more or less an Elseworld , it may take place on another of the 52 Earths.

Advantages:
Area Knowledge (see “Crime in the city” below), Iron Nerves, Lightning Reflexes, Popularity (as Sage), Schtick (My Playground My Rules (High- any city he has contacted that decides to help him)).

Source of Character: The 2005 Veitch/Edwards The Question mini-series. 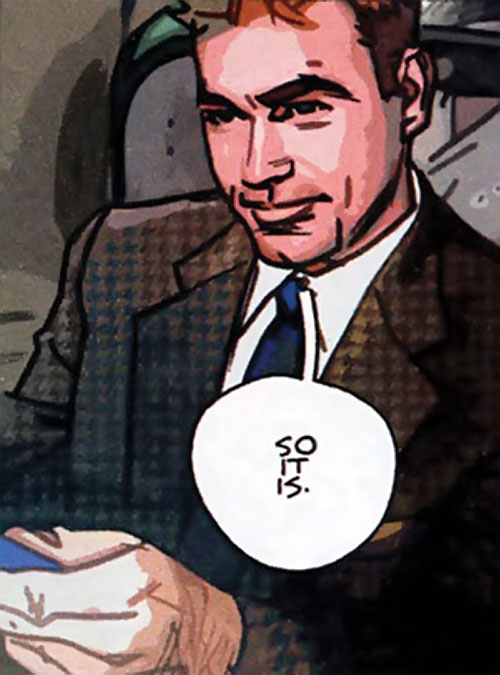 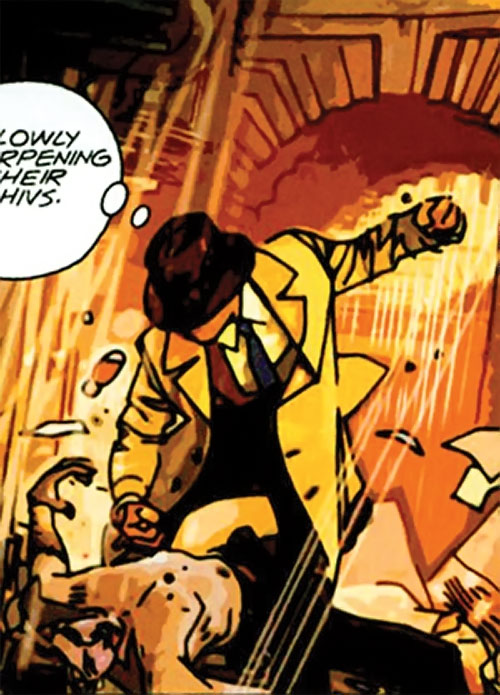 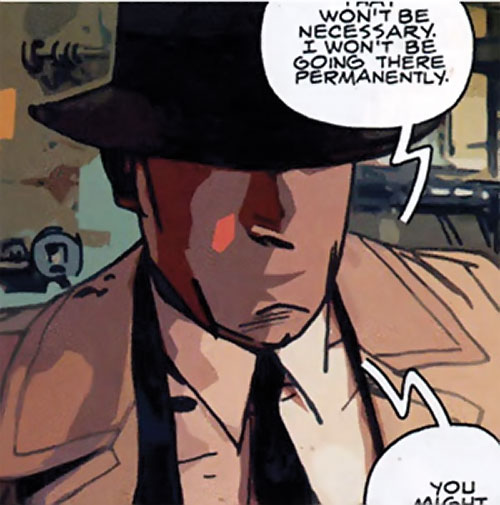 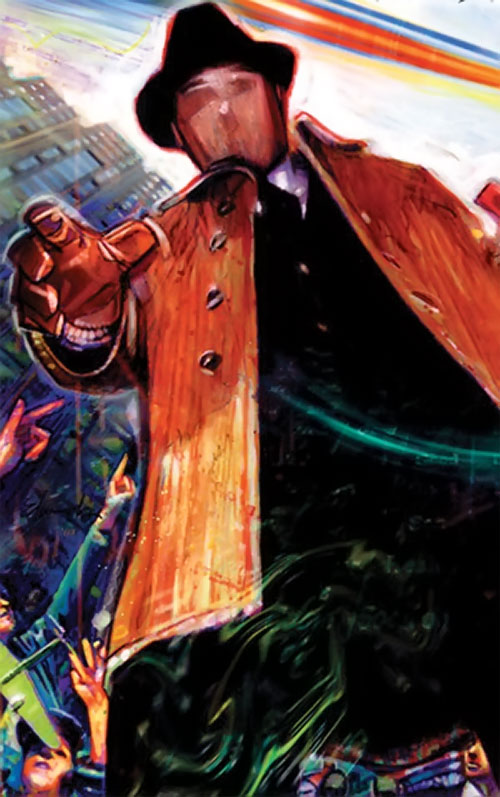 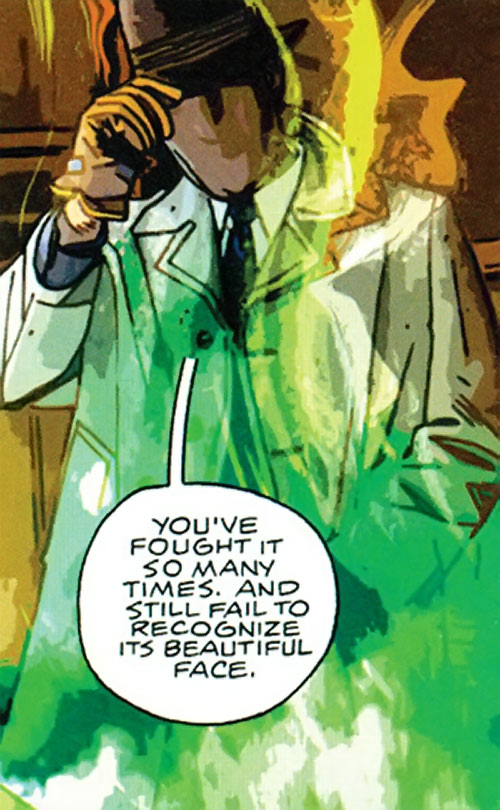 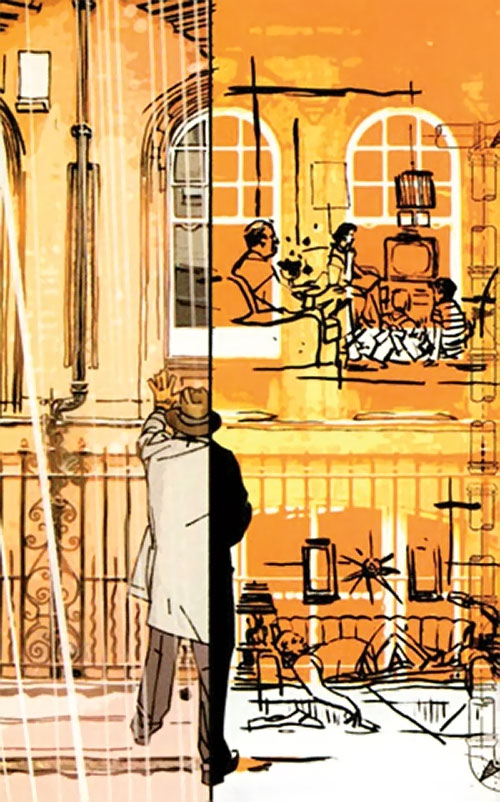