Quicksand is able to transform her body into a sand-like substance, which she can manipulate and reshape at will. Far stronger and durable in this form, she’s come back from having her form turned to glass and shattered.

While in sand form, she can:

Her fluid structure allows her to absorb the force of most attacks, and she can flow around her enemies to hold them tight, or even constrict the life out of them. She can also transform parts or all of her body into a raging sandstorm, blinding and choking anyone close by.

Her body does have vulnerabilities to fire and water, the former fusing her to glass if hot enough, the latter making her muddier.

It’s unclear whether or not she can transform at will between her human and sand forms. In Captain America #388 she appears able to, and this directly follows her deal with Mongoose where he promised his employer would find a permanent cure for her condition.

We never again see her changing form, though, but equally there’s nothing to say she doesn’t. And getting turned back to human doesn’t seem her primary goal any more, so I’ve assumed she can change at will.

A scientist of Vietnamese descent, Quicksand was working in a nuclear facility when she suffered an accident which transformed her. Enraged by her condition, she vented her fury by attacking other nuclear facilities, such as one in New York.

Unfortunately Thor had been there in his civilian identity, and tried to stop her. She managed to get the upper hand for a while, until she realised how much he’d been holding back, at which point she fled further into the facility, through the air ducts. 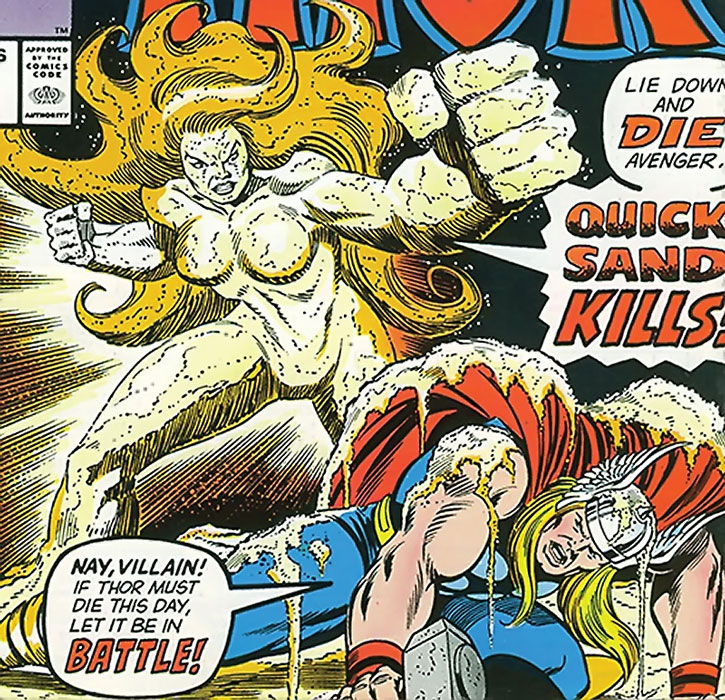 Subduing the staff, she rigged the nuclear core to explode and fled. She fought her way past Thor, who let her go in order to deal with the greater danger. He transported the entire facility to another dimension before it exploded, and Quicksand escaped.

(Given that her later appearances show no further desire to gain revenge on nuclear power, it seems likely this occurred shortly after her transformation.)

Life as a silicate mineral

She was later contacted by Mongoose, who asked for her help acquiring a tissue sample from Thor. Not wanting anything to do with him, Quicksand only agreed once he used a device Count Tagar, his boss, had given him. It turned Quicksand back to human for a few seconds. With promises of a permanent cure, she reluctantly agreed to help.

Drawing Thor out by attacking known associates, she engaged him in a fairly even fight. Quicksand held him there until a beam from Tagar’s ship struck the thunder god, gaining the needed sample. Quicksand then escaped.

She’s next seen among Superia’s Femizons, where she was able to change from human to sand form at will. Thus, it appears that Mongoose and Tagar kept their word, but Quicksand decided not to return to a normal life.

During the pleasure cruise Superia had laid on as part of her recruitment drive, Anaconda picked a fight with Quicksand, to her immediate regret. Quicksand was among the crowd that fought Captain America and Paladin when they turned up, but the pair ultimately shut the operation down.

Circles in the sand

Hearing of a controversial scientific research utilising cells from herself and Sandman, Quicksand travelled to New York. She arrived just as the building was destroyed with the creation of Sandstorm. Spider-Man was already on the scene, and Sandman arrived at the same time as Quicksand.

Sandstorm, believing he killed a colleague while adapting to the changes, lashed out. Both Quicksand and Sandman found they had trouble maintaining their cohesion while in his presence.

While Sandman (currently in his heroic phase) tried to calm Sandstorm down, Quicksand convinced him that his only option was to run with her. This pair then turned on Sandman and Spider-Man. They fought for a while, but then Sandman turned a hose on Quicksand, and Sandstorm was subdued before she could recover. She managed to avoid capture, though.

Of the recurring nature of mongooses

Soon after, she was employed by Seth, the Egyptian God of Death. Quicksand was again partnered with Mongoose, along with Bison. They were dispatched to steal the secret Inferno-42 compound from S.H.I.E.L.D.. Breaking into the facility housing it, they were opposed by Luke Cage and Thunderstrike (Eric Masterson).

After a brief clash with Cage, she managed to keep him at bay by taking a hostage. Unfortunately the girl happened to be Bison’s love, there searching for him. Thus, Bison turned on Quicksand. S.H.I.E.L.D. flooded the installation before the fight had finished, allowing Quicksand the opportunity to escape again. 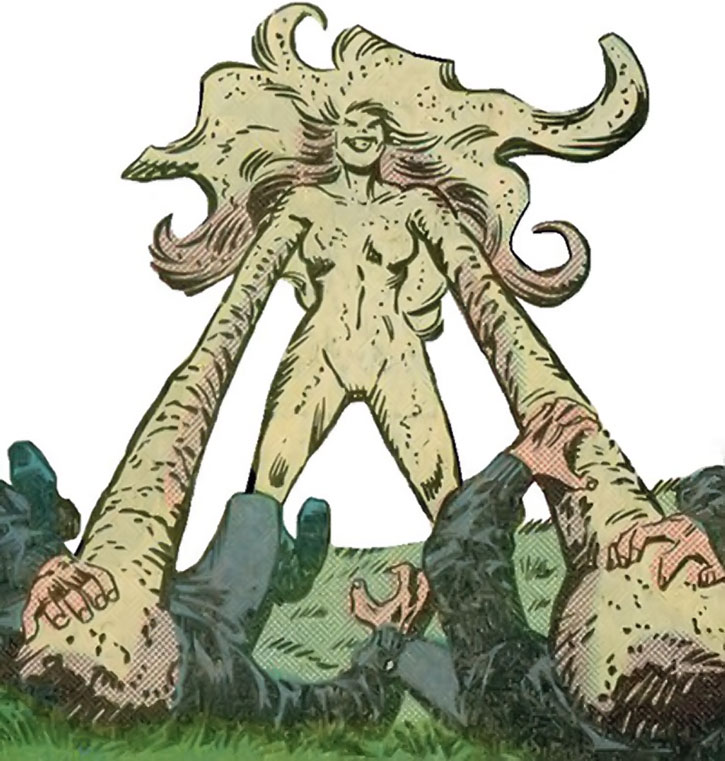 Still partnered with Mongoose, she was again dispatched on a covert mission by Seth. Mongoose’s temper got the better of him however, resulting in them being spotted when they shouldn’t have. They were soon attacked by Bloodaxe, who’d have killed Mongoose had Thunderstrike not interceded.

While Quicksand suggested they get away while Thunderstrike and Bloodaxe fought, Mongoose’s hatred for Thunderstrike forced him to attack. Bloodaxe used fire to turn Quicksand to glass, but Thunderstrike stopped him shattering her, and the pair continued fighting.

It’s unclear what happened to Quicksand following this, but she wasn’t seen being taken into custody.

Next showing up robbing a bank in New York, she came to the attention of Nova, who was disappointed as the radio had said it was Sandman robbing the bank. While she managed to get a few good hits in, his poorly controlled powers burned her, again turned her into glass, and she was smashed into pieces by a truck.

She next appeared as part of the Crimson Cowl’s large Masters of Evil organization, when the Cowl used weather control in a bid to extort money from the world’s governments. The plot was foiled by the Thunderbolts, and despite superior numbers, the Masters lost the fight to them, Quicksand apparently among those apprehended.

During the Civil War, she was again apprehended by the Thunderbolts, and given the option of jail or joining the Thunderbolt Army. With no way out, she agreed to join. Initially assigned to help capture other villains, such as the U-Foes, she was then part of the international battle when the Grandmaster tried to harness the Wellspring of Power (see Thunderbolts entry). She served in Doctor Octopus’ group defending Chicago. 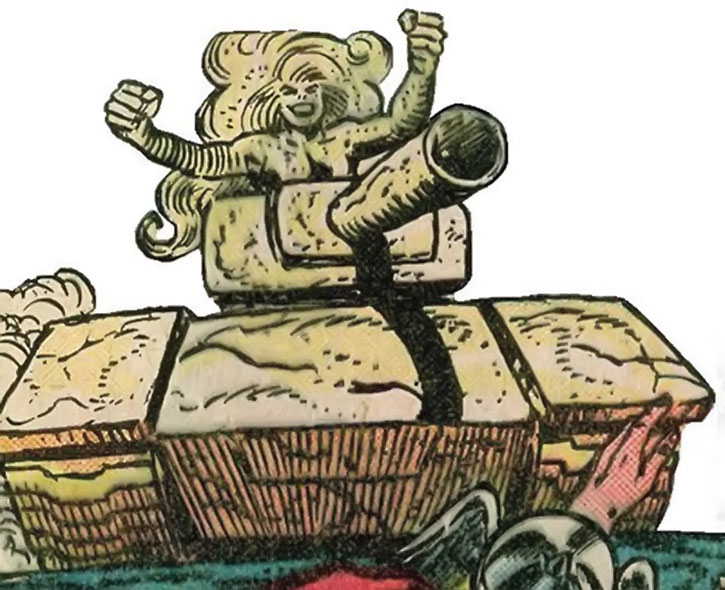 Recruited into the Initiative, she was assigned to the Women Warriors in Delaware, alongside Diamondback, Asp, Black Mamba, and Constrictor.

She, along with the rest of her team, was part of the force Osborn assembled for the invasion of Asgard. They were beaten, but it’s unknown what happened to Quicksand following this.

Aggressive and egotistical, Quicksand tends to be boastful about her abilities, often loudly proclaiming her superiority. How much of this is genuine is debatable, as at one point she’s thinking that she only uses the grade B movie dialogue to hide her true self.

She’s certainly not proud to the point of engaging in needless battles. Quicksand has no problem sneaking away if the battle is going against her, or serves no real purpose.

Her overall goals seem to have settled on the purely mercenary. Her initial desire for revenge can be seen as her rage at being stuck in an inhuman form, which quickly changes into a need to find a way to change back. Once this is accomplished, however, she falls into a more traditional villainous role.

“Out of my way, you witless clods ! Your puny weapons cannot stop one who possesses the power of a living elemental !”

“You egotistical, arrogant fool ! Do you really think you can defeat me ?! Just look at how easily I render your fabled strength useless !”

“Now that I have managed to separate you from your precious hammer — it’s only a matter of time before you strangle beneath my constant barrage of sand ! Further struggle is useless ! Quicksand has defeated you !”

Thor: “Think of the countless innocent lives thou hast endangered !”
Quicksand: “I don’t care about them — or anyone else ! I used to be a scientist ! I was beautiful — but a nuclear accident transformed me into a freak — a monster — and I want my revenge !”

Quicksand: “I fought Thor. He wasn’t all that.”
Asp: “That’s not what I heard. I heard you ran like cheap mascara.”
Quicksand: “You lying…”

Flame/Heat and Water attacks ignore her Fluid Form, and cause her to suffer attacks which may affect her mobility, at an equal AP level. Flame/Heat attacks are handled like Paralysis, transforming her into solid (immobile) glass if it affects her.

Water attacks just tend to slow her down, and can be handled similarly to Flash (but without the sensory component), so her DEX is diminished as she turned into a sludgy mess.

Variable is limited to about PL12. 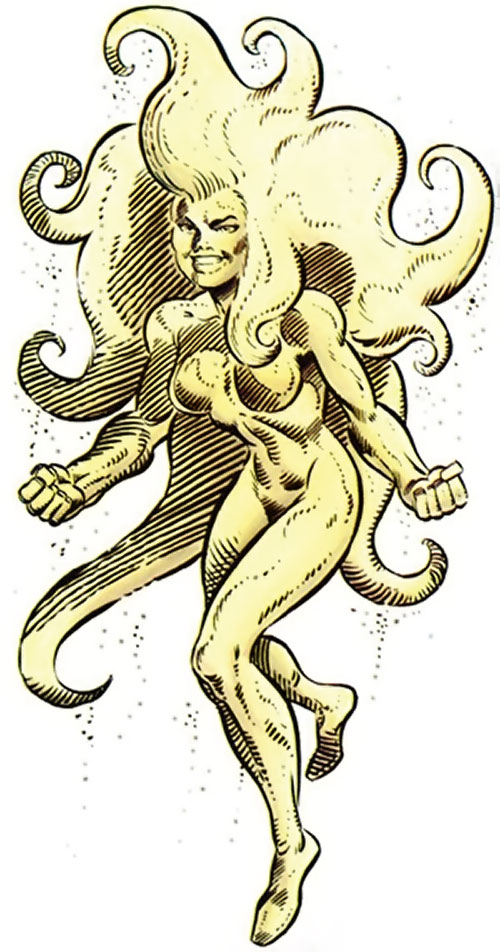 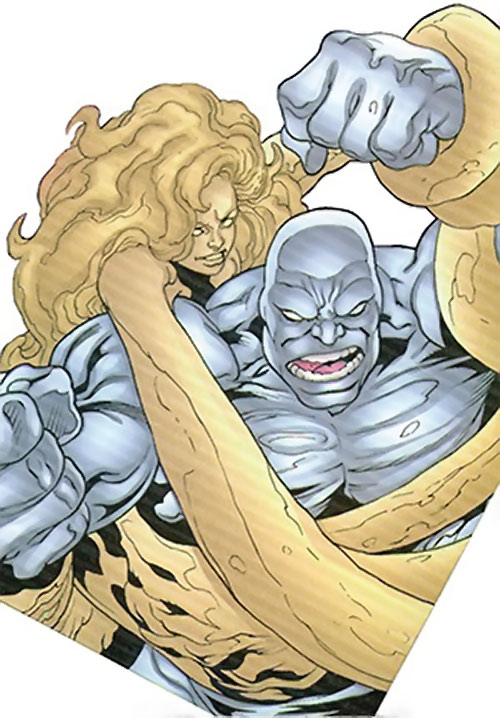 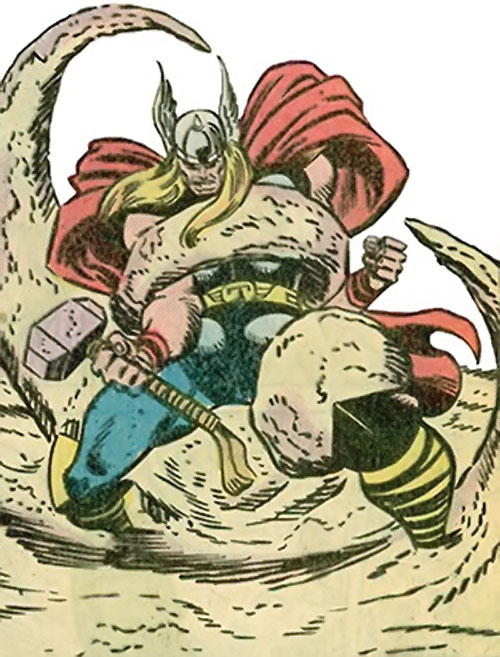 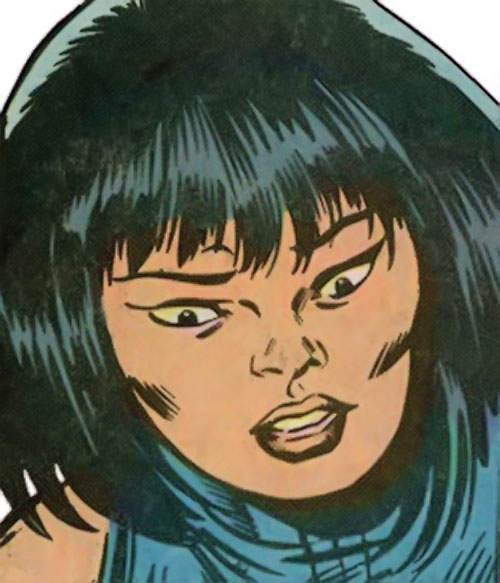 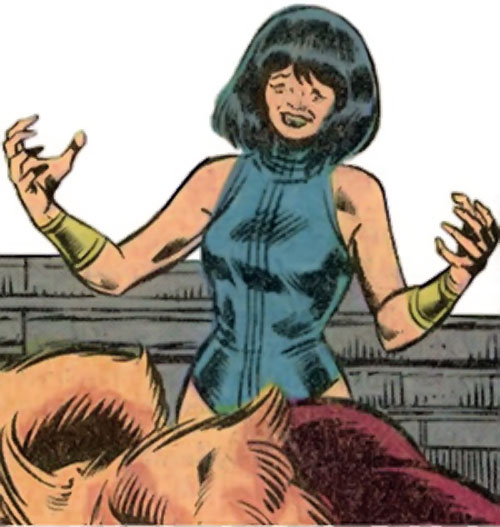 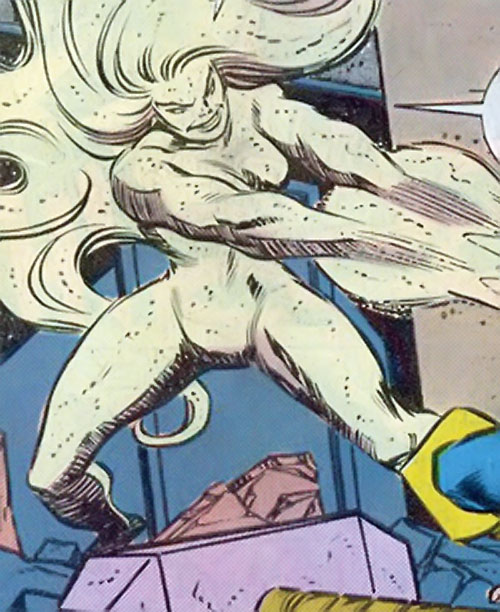 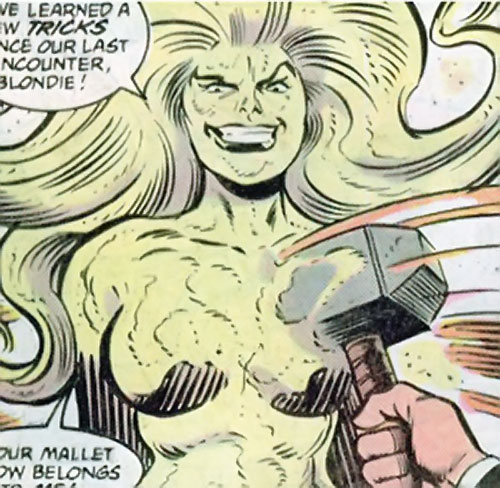 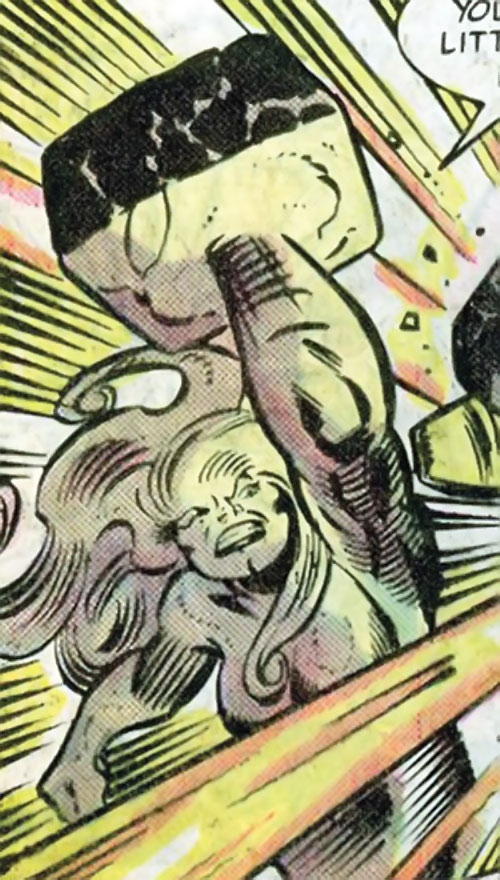