Quicksilver is able to move at superhuman speeds, far in excess of Mach 10.

With enough of a running start, he can also use his momentum to allow him to project himself through the air. However, it doesn’t guarantee that he can land without injury.

Pietro is the son of the mutant terrorist Magneto, and a human woman, Isabelle. His father took him and his twin sister, Wanda, from their mother, to raise as part of his Brotherhood of Mutants cult. Magneto showed them little affection, frequently belittling Pietro openly, seeing them as a reminder of his weakness in loving a human.

The siblings formed an extremely close bond within this environment. They took part in a number of Brotherhood operations, including the kidnapping of the US President’s daughter, which brought them into conflict with the X-Men. Quicksilver again encountered Cyclops when he appeared to changes sides, jealous of the attention his sister paid the X-Man. 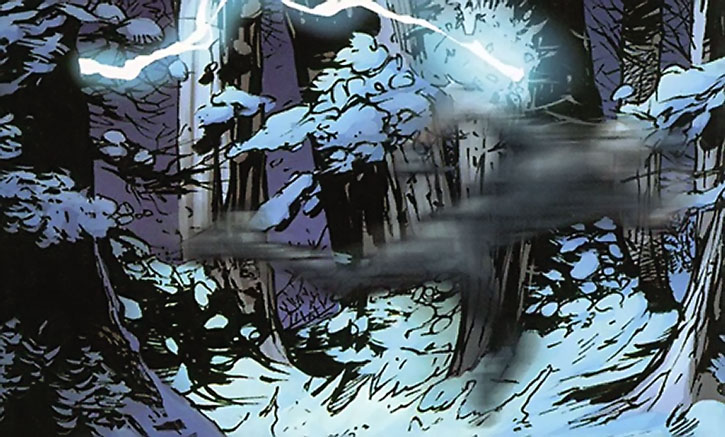 But when Magneto moved against Washington, Cyclops convinced Quicksilver to help stop him. Pietro ran to Washington, removing his father’s helmet so as to allow Professor Xavier to stop him.

After their father’s apparent death in Washington, the siblings assumed leadership of the Brotherhood, adopting a more political approach, even helping free the X-Men when they were abducted by Weapon X. Negotiating with the US Government, they worked on covert missions for S.H.I.E.L.D. in exchange for the release of mutant ’political prisoners’.

This change in approach led to disillusionment among the Brotherhood. Pietro attempted to prove his strength by leading them in stripping Pakistan and India of their nuclear arsenals. Nevertheless, the pair found themselves ostracised from the organisation.

They were recruited into the covert branch of S.H.I.E.L.D.s Ultimates team, and operated alongside Hawkeye and the Black Widow on a number of missions. They were later moved over to the public team, in time to aid in the repelling of the Chitauri invasion of Earth. 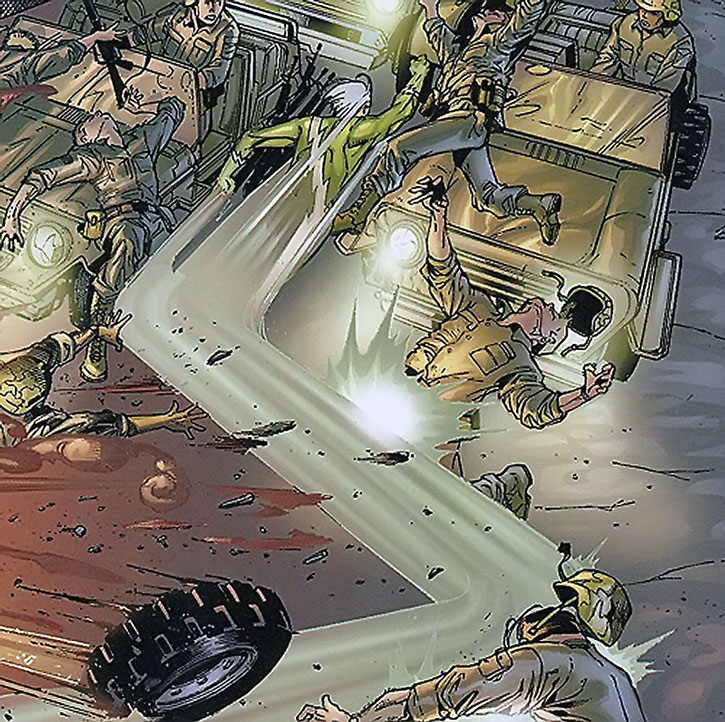 Magneto was later revealed to be alive. He retook command of the Brotherhood, and hunted down his wayward children. He broke into the Triskelion, and battled through the Ultimates present to confront his children, shooting out Quicksilver’s kneecaps as punishment.

The pair continued working with the Ultimates. They aided in the subdual of the believed traitor Thor, and against the Liberators, a super-powered army organised by nations opposed to America’s actions.

Arrogant and aloof, Quicksilver maintains an aristocratic detachment from his team mates which can be interpreted, sometimes correctly, as disdainful.

The only person he’s close to is his sister. Their father’s abuse let them grow closer together. He grew to depend on her support to weather the belittlement he dealt with. They have an unnaturally strong bond, and he would do anything to prevent harm coming to his sister.

“I can’t believe you’re seriously trying to outrun me, you idiots. I could have your skins hanging from the telephone wires in the wink of an eye.”

“That’s what happens when you treat someone like dirt beneath your fingernails for their entire life, father.”

Black Widow (to Wanda): “Oh, and what happened to you this afternoon, darling ? As far as I recall, you and Pietro were just sitting in a coffee house and giggling away like schoolgirls together.”
Quicksilver: “Actually, if you slow down the building’s security tapes, I think you’ll find that I saved your lives on 3 separate occasions, you ungrateful sow.”

Black Widow: “What are you talking about, Quicksilver ? You 2 weren’t even around for the fight.”
Quicksilver: “Actually, if you slow down any satellite pictures of the attack, I think you’ll find that Scarlet Witch and I…”
Black Widow: “Oh great. Here we go again.”

“You want fast, Hurricane ? I’ll give you fast — what kind of limits dud they take you to back home ? Mach five ? Mach ten ? I was hitting those numbers when I still had pimples ! Feel your bones rumbling like you’re riding on a freight train ? That’s molecules dancing— That’s what happens when you threaten my friends !”

Bonuses and Limitations:
Jumping is Contingent on Superspeed (-1), requires him to take at least as far as a run up (-1), and provides no protection from falling (see below, -1).

While Quicksilver’s speed allows him to propel himself further into the air than regular jumping would allow, but it doesn’t provide him with any resistance to the resulting landing, so he needs someone to catch him.

His Jumping power therefore, only functions to allow him to reach his maximum height, and his descent would be treated as regular falling damage. For horizontal jumps, take half the distance jumped as being the height he’s falling from. 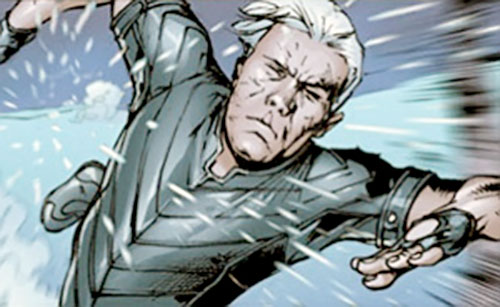 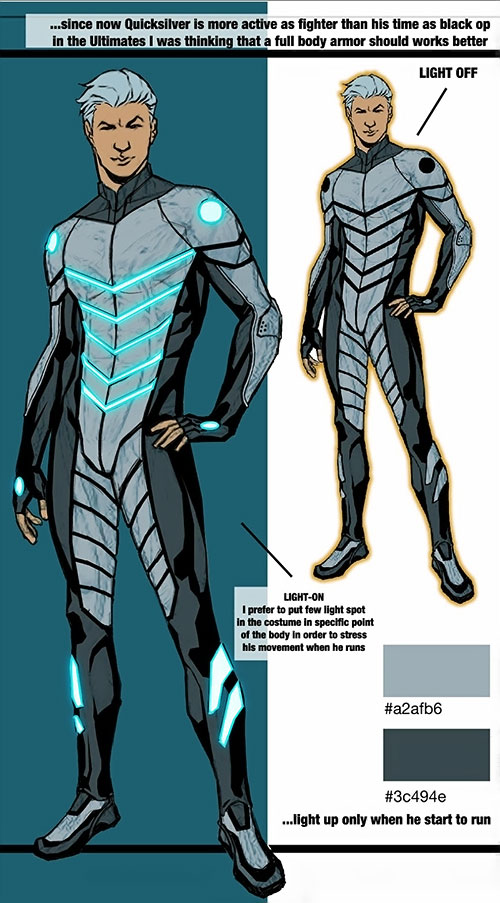