Quillboars form brutal, primitive tribes. Between the War of the Ancients and the Cataclysm, they were chiefly found in the Barrens of Kalimdor.

Xenophobic and aggressive, the quillboar tribes have been fighting for territory since at least the War of the Ancients. Though they are savage warriors, they have not generally fared well as they clashed with Taurens and Pandaren.

Just before the Cataclysm, they chiefly fought with :

As a result their holdings were slowly shrinking. Yet there was little hope of taking their fortress – Razorfen Downs. This maze of giant, mutated thorns stood in the Barrens at the edge of the Thousand Needles ravines, and was the base of the most powerful quillboar clerics. 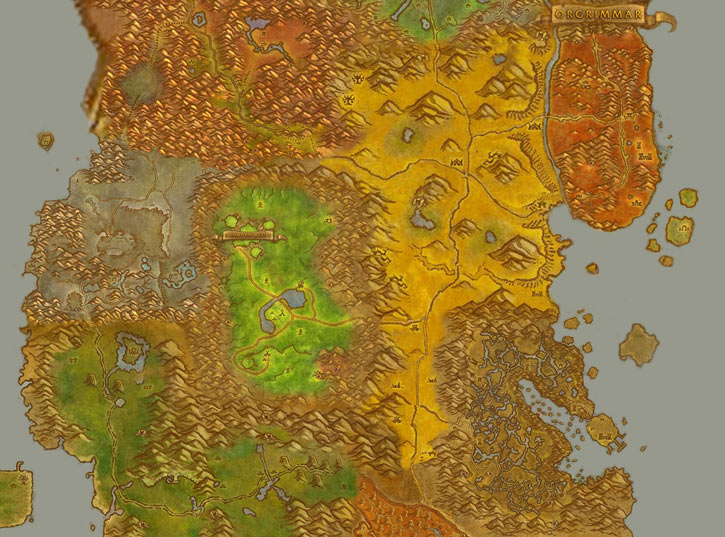 Central Kalimdor. The Barrens are in yellow, and Orgrimmar and Thunder Bluff are labelled. The Razorfens are at the southern tip of the Barrens – the area where the yellow turns brown.

Outside of Razorfen Downs, quillboar tribals live hand to mouth and have few resources. Their small warbands subsist by raiding the weaker settlements, attacking travellers at oases and the like. They will leap onto any opportunity to extend their turf, and thus embiggen their tribe thanks to the increased resources.

Quillboars can become a real problem when warbands agree to group up. Especially as their shamans join forces to cast bigger spells.

They can then threaten the forces of the Horde in the Barrens, away from the Crossroads. Though most assume that Quillboars fight like brutes, they are actually excellent soldiers with a very high morale. Furthermore, they instinctively coordinate well as packs that excel on the offense and seldom back down.

Quillboars are the descendants of one of the Ancient Guardians. The Ancients are oft-gigantic animal demigods of great power. They have been known to enter alliances with the druids and particularly the Elves. The creator of the Quillboars was Agamaggan, a colossal boar wrapped in thorny vines.

During the War of the Ancients, Agamaggan was among those persuaded to fight along mortals. The objective was to prevent the end of the world at the hand of the Burning Legions. Agamaggan fought like a juggernaut, destroying many beasts and fighters of the Legions.

While he was eventually killed by the endless enemy, from his blood sprang great thorny vines gripping the ground. And among these were born the first Quillboars. Where the demigod died the greatest vines and greatest Quillboars arose, creating the Razorfen Downs. Unfortunately, Quillboars possessed none of the nobility of their Ancient father. 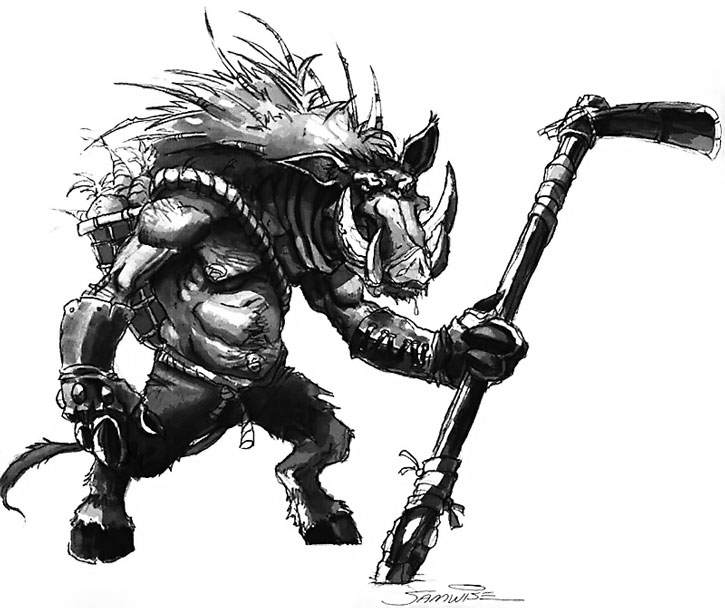 During the years before the Cataclysm, a powerful quillboar warlock called Charlga Razorflank (but usually known as the Crone of Razorfen) took over the Razorfen Downs. She also took control of the underground portion of the fortress, the Razorfen Kraul.

She and her fell lieutenants formed the Death’s Head tribe, and turned the Razorfen tribe into their servants. The Crone even struck a deal with the undead army of the Scourge . In this way, she and her lieutenants could develop death powers.

Though most records were lost in the Cataclysm, it would seen that the Crone and the Death’s Head were killed by adventurers.

A typical male is 5’6”-ish and 200+ lbs. Razorfen tribals are larger, and females are on average 5” smaller.

Quillboars are violently misogynistic. Most females are not allowed to do anything. They are killed or kill themselves when they no longer can bear children. Female babies are usually left to die if the warband has enough females to keep pregnant.

If a female shows great physical strength or magical ability, she will be treated exactly like a male. For all intents and purposes she becomes socially male. Conversely, weak males are treated like females, usually resulting in abandonment or death. Warriors that get too old nearly always prefer to go out in a blaze of glory before they are weak.

Warbands are utterly dominated by shamans, who have rights of life and death.

Many myths are about joining Agamaggan in the afterlife, where a much better existence begins. Firm belief that death just means returning to Agamaggan is behind much of the remarkable fearlessness of the quillboars. Though one notices that tales about the Ancient tend to be oddly convenient to reinforce the power of the shamans.

The ideology professed by the shamans is also violently xenophobic. According to it, non-quillboars in perceived quillboar lands are the source of all ills.

Quillboars revere strength – if a tribe member with below-average (or even average) strength dies, this is seen as a good thing as it culls the weak from the tribe.

Oh and, say, do you guys know where Mankrik’s wife is ?

Bonuses and Limitations:
Ultra-vision only to counter low levels of light (-1).

Drawbacks:
Serious Rage, SIA toward fighting for their tribe. Quillboars do not generally speak foreign languages.

Most shamans have a few Mystic-Linked Powers and/or Rituals at 4-5 APs. These spells commonly have to do with disease, wind, the earth and the summoning of spirit boars. They also have enough Occultist to cast their Rituals.

More powerful individuals exist, of course. These are more common among the Razorfen tribals – who are quite larger and have one more AP of STR and BODY, plus possibly other assets.