Sliders was a 1995-2000 TV show about parallel realities. Quinn Mallory was one of the main characters.

The show is generally considered to have started in a strong and interesting way, but to have been mismanaged into schlokiness starting partway through the third season. Not coincidentally, this entry doesn’t cover the show past Season Three.

Quinn is scientifically oriented and a very resourceful man. Being a Slider is very educational and he learns his lessons. He is a genius and appears to be one on every world they visit. On several on them he has also invented, or is on the verge of inventing, sliding technology.

In reasonably good shape, he excels at sports and is a natural gunman and melee combatant. His main assets are, of course, his intellect and courage.

His people skills are reasonably good and he easily makes friends and allies.

The Sliders are on a trail of jumping between parallel Earths using a Einstein-Rosn-Podolsky  bridge (a wormhole ).

Objects or people that travel through the wormhole begin and end in the same location geographically and chronologically. However, they have no way of controlling the destination of said wormholes. Thus, once on a new Earth they check their timer to determine when the next portal can be opened up. It will hopefully lead them back to their home dimension (“Earth Prime”).

Failure to open such a portal on time and jumping through it will result in being stuck on that Earth for 29 years.

So far the team has always managed to slide on to the next world on time (except perhaps once where they might have gotten the wrong professor with them). But it has often been in the nick of time. All this while trying to get food, taking tempjobs and avoid getting arrested for one thing or another. And yeah, the wormhole landing is always rough (just ask the professor).

The Sliders have been to over 50 different San Franciscos and a few Los Angeleses (and even San Angeles, New Alexandria and other cities). The most memorable worlds have been:

Once, after 18 months of traveling they believed they had reached home. But eventually minor differences were found and they had to continue their journeys for their real destination (episode “Post Traumatic Slide Syndrome”).

Sometimes they reach lethal worlds. There they have to use all their time to just stay alive.

The most important world they have visited is probably where they encountered the Kromaggs, a race of interdimensional conquerors. These had been created by one version of Quinn. This encounter started a long-going war between the Sliders and the Kromaggs.

They often stay at the Dominion Hotel during they stays in the various San Franciscos. For a brief recap of the various worlds, check through, for example, IMDB’s episode list .

The time for next slide varies from between a few months down to 40 seconds or so only. It is usually a few days. Since they are actively trying to get back home they sometimes have to verify if they’ve found their way back home or not. Often it’s immediately clear that they haven’t.

The more people that use the wormholes, the more power is drained from the device and safe jumping becomes increasingly difficult. The safe limit seems to be four sliders per jump. Should more people travel and in DC Heroes RPG terms, the travel device’s R# should be increased with failure leading to possibly disastrous effects.

The device needs also to be recharged or allowed to rest for a while after too much or intense use. Sometimes, actual repairs are needed. These can be very difficult in low-tech realities. In DC Heroes game terms, the R# of the device will slowly increase over time until it if fixed again.

In theory, Quinn could modify the device to eventually get them home, but he never has the time to do so between the jumps. See the device with further notes under the Equipment section.

The other Sliders are:

Quinn is a tall, young man. He is usually clad in whatever fits the most recent world the team has visited. He seems to prefer a pair of jeans and a jacket.

He is in good shape and has rather non-threatening body language.

Quinn is good at improvisation. Earlier he appears to have enjoyed playing baseball and American football. He wants to share his sliding technology – which he developed because he wanted to see what was out there – with the world. He often talks about it with people on the Earths they visit, but they never believe him until they open the portal and slide away to the next world.

Generally a friendly guy he often gets along well with various people and doubles of the team they encounter on their journeys.

Quinn is an upbeat and adventurous spirit even as he was introverted in his youth. He will try to intervene if he perceives an unjust act, even at the risk of his own life, and even if the Sliders generally try to have a non-intervention policy. Prof. Arturo has accused him of having a misguided sense of bravado.

He follows a code of conduct generally in agreement with the laws of his native society, and so will perform some illegal things on the new worlds they visit.

Quinn feels guilty for having dragged the others along. Perhaps to compensate, he is slowly turned into something of a hero in his own right from earlier having been rather wide-eyed and eccentric. He occasionally offers people, such as lone survivors, doomed people and the like, to join them on their next slide to a hopefully better world.

Fact is, even if Quinn one day could return to Earth Prime he would probably rebuild the timer into allowing controlled sliding and continue to explore the multiverse.

Although not the strongest personality in the group, Quinn through his bravely and intellect would usually be the defacto leader.

He is good friends with the computer-savvy, more New Age-inspired Ms. Welles. Welles often has to serve as the team’s conscience and who seemed to be secretly in love with him, something Quinn, who regarded her almost his sister, mostly was too oblivious to notice. Both being Sliders, they apparently were too shy and occupied by situations they were thrown in to act upon their feelings.

Although Arturo was arrogant, formal, hot-tempered, and pompous. Yet he and Quinn went along great. While Arturo was somewhat jealous of Quinn’s greater intellect, Quinn was actually Arturo’s best student and they sometimes were like surrogate father and son. When Arturo was killed, Quinn took it pretty hard and promised to bring justice to his murderer.

As to Brown, he was initially bitter against Quinn for unwillingly being a Slider. But he eventually gained respect for Quinn. While the two became fairly close friends (Brown refers to Quinn as Q-ball), they would still occasionally harbor conflicting views.

As to the newcomer after the professor, Maggie Beckett, there is a strong attraction between Quinn and her. It would manifest in them bickering over nothing, and put a new dynamic in the group. Perhaps that will develop into something over time as it had done on one of the parallel worlds that they visited.

“This ranks very high on the weird meter.”

Considering that they are often extensively affecting the worlds they visit, Quinn and the Sliders would actually fit well as a non-mutant team of Exiles in the DC or Marvel multiverse fixing up continuity and history wherever they go. And considering that there are more Quinns out there sliding between the worlds, there are probably also a few more Slider teams running around.

The team would probably have informed the Linear Men of various interdimensional threats, and likely would have had at least one run-in with the Legion of Superheroes. It’s possible also that the Sliders originate from the world known as Earth Prime, Superboy Prime’s Earth, in the DC Universe.

Equipment:
Timer [BODY 01, Detect (wormholes): 20, Dimension Travel: 07, Miniaturization: 08, R#2, Notes: The device is of Quinn’s own design and looks like a cross between a calculator and an older cell phone.]

Technical notes about the timer

It seems a wormhole can be opened up at any time (except after the timer has reached zero). But the team believes that they follow a cyclic route which seems to be the only practical way through which they could return home to Earth Prime. This is why they have to jump according to a timer.

Thus, the timer reports when a wormhole to the next new dimension can be opened. Then at that time and approximate place open said wormhole, a very bright, round portal in the air, which will be open for travel up to 60 seconds.

If the device is working well an alarm can be set that goes off when it’s time for the next slide. The device originally landed them in a rather close geographic vicinity of where they had left, but the later device (after episode “Double Cross”) could land them up to 400 miles away from the original location. Thus, they could land in Los Angeles or San Francisco.

They started using a third timer (after episode “Slide like an Egyptian”). But its differences, if any, are not revealed, although it seems they started reaching more exotic worlds.

A bit later on they gained the ability to return to a previously visited world if they wanted to before continuing on the cycle. Limitations: wormholes are Uncontrollable (-1) and can only be used for traveling between random parallel Earths (-1)].

After Arturo was killed, Quinn had the Guild Drawback for a while.

In later seasons, after the point of this writeup, his DEX, Acrobatics and Weaponry likely all raised to a full 04 APs. 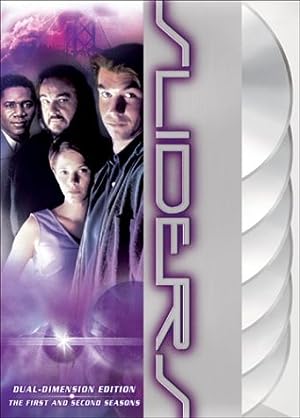 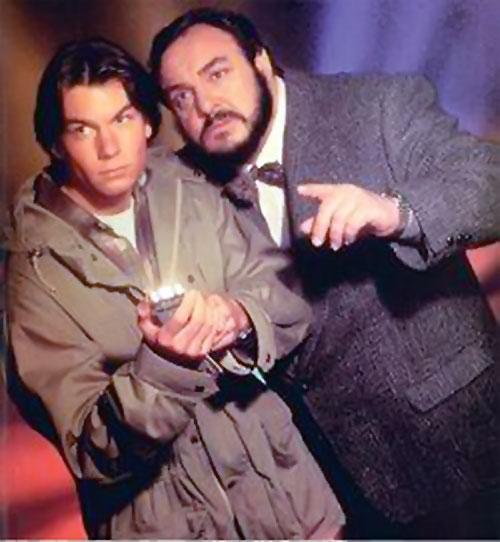 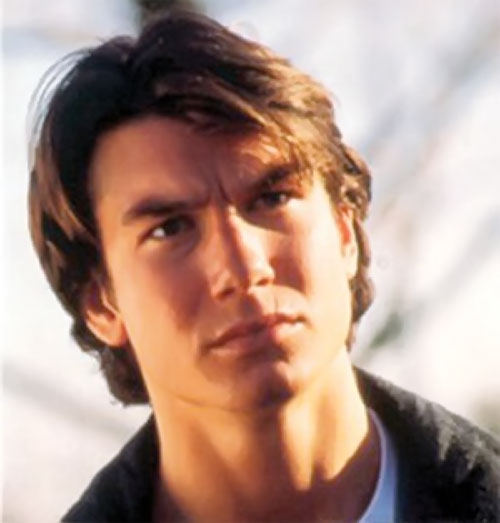 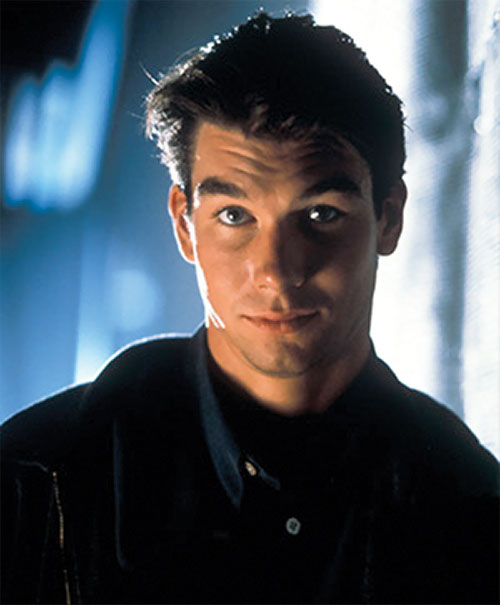